The unexpected lysis of a large culture of Halobacterium salinarum strain S9 was found to be caused by a novel myovirus, designated ChaoS9. Virus purification from the culture lysate revealed a homogeneous population of caudovirus-like particles. The viral genome is linear, dsDNA that is partially redundant and circularly permuted, has a unit length of 55,145 nt, a G + C% of 65.3, and has 85 predicted coding sequences (CDS) and one tRNA (Arg) gene. The left arm of the genome (0–28 kbp) encodes proteins similar in sequence to those from known caudoviruses and was most similar to myohaloviruses phiCh1 (host: Natrialba magadii) and phiH1 (host: Hbt. salinarum). It carries a tail-fiber gene module similar to the invertible modules present in phiH1 and phiCh1. However, while the tail genes of ChaoS9 were similar to those of phiCh1 and phiH1, the Mcp of ChaoS9 was most similar (36% aa identity) to that of Haloarcula hispanica tailed virus 1 (HHTV-1). Provirus elements related to ChaoS9 showed most similarity to tail/assembly proteins but varied in their similarity with head/assembly proteins. The right arm (29–55 kbp) of ChaoS9 encoded proteins involved in DNA replication (ParA, RepH, and Orc1) but the other proteins showed little similarity to those from phiH1, phiCh1, or provirus elements, and most of them could not be assigned a function. ChaoS9 is probably best classified within the genus Myohalovirus, as it shares many characteristics with phiH1 (and phiCh1), including many similar proteins. However, the head/assembly gene region appears to have undergone a recombination event, and the inferred proteins are different to those of phiH1 and phiCh1, including the major capsid protein. This makes the taxonomic classification of ChaoS9 more ambiguous. We also report a revised genome sequence and annotation of Natrialba virus phiCh1. View Full-Text
Keywords: halovirus; caudovirus; halobacteria; Archaea; haloarchaea; genome inversion; transposon halovirus; caudovirus; halobacteria; Archaea; haloarchaea; genome inversion; transposon
►▼ Show Figures 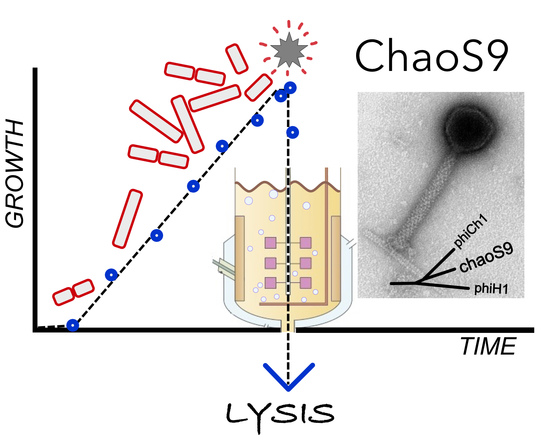