Testis cords are the embryonic precursors of the seminiferous tubules. Development of testis cords is a key event during embryonic testicular morphogenesis and is regulated by multiple signaling molecules produced by Sertoli cells. However, the exact nature and the cascade of molecular events underlying testis cord development remain to be uncovered. In the current study, we explored the role of DNA damage binding protein 1 (DDB1) in Sertoli cells during mouse testis cord development. The genetic ablation of Ddb1 specifically in Sertoli cells resulted in the compromised Sertoli cell proliferation and disruption of testis cord remodeling in neonatal mice. This testicular dysgenesis persisted through adulthood, resulting in smaller testis and low sperm production. Mechanistically, we observed that the DDB1 degradation can stabilize SET domain-containing lysine methyltransferase 8 (SET8), which subsequently decreases the phosphorylation of SMAD2, an essential intracellular component of transforming growth factor beta (TGFβ) signaling. Taken together, our results suggest an essential role of Ddb1 in Sertoli cell proliferation and normal remodeling of testis cords via TGFβ pathway. To our knowledge, this is the first upstream regulators of TGFβ pathway in Sertoli cells, and therefore it furthers our understanding of testis cord development. View Full-Text
Keywords: Ddb1; Sertoli cell; testis cord; spermatogenesis; TGFβ Ddb1; Sertoli cell; testis cord; spermatogenesis; TGFβ
►▼ Show Figures 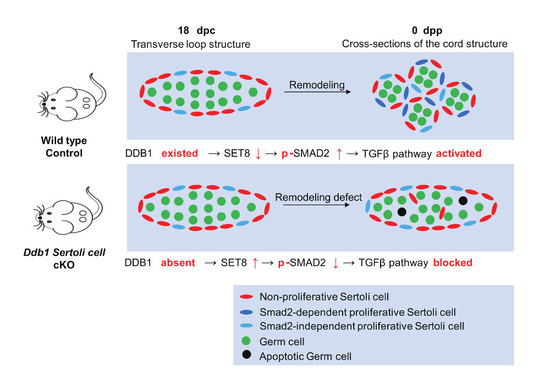