N-linked glycosylation and sugar chain processing, as well as disulfide bond formation, are among the most common post-translational protein modifications taking place in the endoplasmic reticulum (ER). They are essential modifications that are required for membrane and secretory proteins to achieve their correct folding and native structure. Several oxidoreductases responsible for disulfide bond formation, isomerization, and reduction have been shown to form stable, functional complexes with enzymes and chaperones that are involved in the initial addition of an N-glycan and in folding and quality control of the glycoproteins. Some of these oxidoreductases are selenoproteins. Recent studies also implicate glycan machinery–oxidoreductase complexes in the recognition and processing of misfolded glycoproteins and their reduction and targeting to ER-associated degradation. This review focuses on the intriguing cooperation between the glycoprotein-specific cell machineries and ER oxidoreductases, and highlights open questions regarding the functions of many members of this large family.
Keywords: PDI; oligosaccharyltransferase; calnexin; ER quality control; mannosidase; ERAD PDI; oligosaccharyltransferase; calnexin; ER quality control; mannosidase; ERAD

Secretory and membrane proteins are folded in the endoplasmic reticulum (ER) with the aid of various molecular chaperones and oxidoreductases, which catalyze oxidation and reduction reactions on their cysteine residues. The great majority of the secretory proteins are glycosylated, mostly by addition of one or more N-linked oligosaccharides covalently attached to asparagine (Asn) sidechains. Nascent N-linked glycoproteins possess a large oligosaccharide precursor, Glc3Man9GlcNAc2, which is later sequentially trimmed. Protein folding and acquisition of the correct native structure depends on the addition and proper processing of these sugar chains. Defects in N-linked glycosylation can cause a number of inherited diseases named congenital disorders of glycosylation. The ability of mammalian cells to correctly identify and degrade misfolded secretory proteins is crucial for their correct function and survival. An inefficient disposal mechanism results in the accumulation of misfolded proteins and consequent ER stress.
Disulfide bond formation is one of the most important modifications affecting secretory protein folding, which is catalyzed by the disulfide isomerase (PDI) family of proteins. Most glycoproteins have disulfides, which are present in 78% of the secretory proteins [1]. The oxidative environment in the ER enables ER-resident oxidoreductases to facilitate disulfide bond formation, which stabilizes protein structures. Proper redox conditions in the ER, together with regulation of calcium homeostasis, are vital for the functions of many luminal pathways and the maintenance of homeostasis.
Oxidoreductases are enzymes involved in the protein folding process, which are responsible for modifying exposed cysteine thiol groups by oxidation, reduction, and isomerization. The oxidoreductases contain domains structurally similar to cytosolic thioredoxin, called thioredoxin-like domains. The reaction of disulfide bond formation is assisted by exchange of two electrons between the cysteine of the substrate protein and cysteines in a catalytic Cys-X-X-Cys motif in the thioredoxin-like domain of the oxidoreductases (reviewed by Robinson and Bulleid in this Special Issue [2]). Over 20 oxidoreductases have been identified in the ER, of which PDI, also known as P4HB/PDIA1, is the best characterized. Some of these enzymes contain more than one thioredoxin-like domain, including some that are not catalytic (e.g., PDI contains two active and two non-catalytic thioredoxin-like domains). The enzymes are soluble ER luminal proteins, except for the five members of the TMX subfamily, which have a transmembrane domain (reviewed by Guerra and Molinari in this Special Issue [3]). The oxidoreductases catalyze disulfide bond formation by oxidizing the cysteine residues of the folding protein. The reduced oxidoreductase molecules are then re-oxidized by several oxidases—Ero1α, Ero1β, Prx4, GPX7, and GPX8 [4,5,6,7,8]. Ero1α is the main oxidase involved, transferring a pair of electrons to molecular oxygen in a flavin-mediated reaction to yield hydrogen peroxide. Several of the oxidoreductases have the capability, and in some cases a preference, to reduce disulfide bonds. The stability of the active-site disulfides determines the function of the PDI family member in reduction or oxidation. Comprehensive reviews of the oxidoreductases and their mechanism of action can be found in [9,10,11].
There is also a series of ER-resident oxidoreductases that are selenoproteins. Selenoproteins are proteins that incorporate an atom of selenium instead of sulfur in one or more cysteines, which are then called selenocysteine, abbreviated as Sec (U). Incorporation of Sec into a selenoprotein is a result of transfer from a selenocysteine-specific tRNA, which decodes an UGA codon in the mRNA. Selenoproteins intervene in numerous physiologic pathways, such as immune responses, antioxidant defense, redox signaling, and thyroid hormone metabolism. Some of the selenoproteins function as oxidoreductases, containing thioredoxin-like domains with one or more selenocysteines instead of cysteine in a catalytic Cys-X-X-Sec or similar motif [12,13,14].
In addition to their catalytic activity in disulfide bonding, many of the oxidoreductases were shown to recognize hydrophobic pockets in their substrate proteins, and thus they are in fact folding sensors. They participate in the recognition of misfolded glycoprotein domains during sugar chain trimming and creation of what was termed the glycan code for targeting to ER-associated degradation (ERAD) [15]. The oxidoreductases escort and functionally interact with glycoproteins, from their translocation into the ER and glycosylation to late stages of productive folding or targeting to ERAD. Several oxidoreductases have been found in recent years to associate functionally with the glycan recognition and processing machineries in the ER, which is the focus of this review.

2. Oxidoreductases in the Oligosaccharyltransferase Complex

4. Involvement of Oxidoreductases in Mannose Trimming of Unfolded Glycoproteins

5. Oxidoreductases and Glycoprotein Targeting to ERAD

As discussed in the previous section, differential trimming of mannose residues from N-linked glycans determines whether glycoproteins are transported through the Golgi complex, or in the case of irreversibly misfolded glycoproteins, are retained in the ER and degraded by ERAD. This mechanism of protein surveillance is closely linked to redox and Ca2+ homeostasis. Ca2+ is necessary for the function of the major chaperones in the ER, including calnexin, calreticulin, BiP, and some PDIs. Inhibition of Ca2+ uptake into the ER causes ER stress due to inefficient protein folding and accumulation of unfolded or misfolded proteins. Consequently, maintenance of Ca2+ homeostasis is critically important for the functional integrity of the ER [102]. The main regulator of Ca2+ uptake into the ER is the sarco/endoplasmic reticulum calcium pump (SERCA), the activity of which is regulated by redox conditions (reviewed by Roscoe and Sevier in this Special Issue).
As we have seen, ER oxidoreductases are involved in the productive folding of newly synthesized glycoproteins, but they are also implicated in ERAD of misfolded glycoproteins. ERAD requires transport of a misfolded protein through the ER membrane to the cytosol, in a process called retrotranslocation. The mechanism involves recognition and segregation of terminally misfolded proteins from folding intermediates, targeting the former to membrane-bound ubiquitination complexes (the best-studied of which contains the HRD1 ubiquitin ligase), and finally degradation by cytosolic proteasomes (Figure 2). The HRD1 complex was suggested to be recruited by the homocysteine-induced ER protein (Herp) [103,104,105,106,107,108]. An important role in ERAD is played by p97 (Cdc48 in Saccharomyces cerevisiae), a member of the AAA (ATPase Associated with various cellular Activities) ATPase family. In conjunction with a large number of alternative cofactors and adaptors, p97 couples ATP hydrolysis to segregation of polypeptides from immobile cellular structures, such as protein assemblies, membranes, ribosomes, and chromatin. This often results in proteasomal degradation of the extracted polypeptides, and in ERAD p97 provides (in a complex with cofactors Ufd1 and Npl4) force for protein dislocation from the ER membrane to the cytosolic proteasomes [109,110,111,112,113]. P97 is recruited to the site of retrotranslocation through association with proteins present in the retrotranslocation complex, including the Derlins 1–3 and HRD1. These proteins each bear a p97 interacting motif, and the interactions with p97 allow the effective capture of substrates emerging from the proposed retrotranslocation channel [114].
There is evidence that the retrotranslocation process entails reduction of disulfide bonds of the substrate protein for unfolding, and several oxidoreductases have been implicated in this reduction and targeting to ERAD [115]. For the substrate recognition step, one non-catalytic member of the PDI-family, ERp90, interacts with misfolded proteins and associates with ERFAD, also known as FOXRED2, an NADPH-dependent reductase flavoprotein. In cells, ERFAD interacts with the ERAD luminal factors OS-9 and ERdj5 and the ER membrane protein SEL1L [78] (Figure 2). For glycoproteins, as explained above, mannose trimming allows recognition and binding to the lectins OS-9 and XTP3-B [76,77]. OS-9 associates with SEL1L, which in turn is in a complex with HRD1, thus targeting the glycoprotein for retrotranslocation [75]. One of the mannosidases involved in the trimming, EDEM1, has been found to associate with the oxidoreductase ERdj5. ERdj5, also known as JPDI (J-domain-containing PDI-like protein), functions as a reductase that reduces disulfides in misfolded ERAD substrates, such as α1-antitrypsin NHK, facilitating their retrotranslocation and degradation [79,80,81]. Biochemical analyses indicated that two thioredoxin domains that constitute the C-terminal cluster of ERdj5 form the reducing motif that interacts with EDEM1 and reduces disulfide bonds in EDEM1-associated glycoprotein substrates [79,80]. Through its J domain, ERdj5 also associates with BiP; ERdj5 appears to be crucial for ERAD, as ERdj5 knockout causes misfolded protein buildup and ER stress [50]. Nevertheless, the action of ERdj5 does not always lead to ERAD. Association of ERdj5 with the low-density lipoprotein receptor (LDLR) reduced non-native disulfides, allowing isomerization and productive folding [116]. Hence, ERdj5 acts as an ER reductase, both facilitating ERAD of misfolded proteins and catalyzing the folding of proteins, such as LDLR, that form obligatory transient non-native disulfides.
Another reductase that has recently been implicated in ERAD is TXNDC11. TXNDC11 was identified in screens involving gene trap mutagenesis and CRISPR/Cas9-mediated knockout in human haploid cells. It was found to be required for ERAD of various substrates, including unassembled CD3δ, TCRα, and mutant α1-antitrypsin NHK, but not for NHK-QQQ, a non-glycosylated version [65]. As mentioned before, TXNDC11 interacts with the EDEMs, enabling mannose trimming of their substrates. Therefore, the glycan processing appears to be coupled to the reduction of the disulfide bonds and targeting to retrotranslocation. PDI, which also interacts with EDEM1 and 2 [63], has likewise been implicated in reduction of glycoproteins for ERAD, in the turnover of Hedgehog, and in the degradation of mutant Akita pro-insulin in mammalian cells [61,62]. PDI is also required for ERAD of mutant carboxypeptidase Y (CPY*) in yeast [117].

Research related to this article was supported by grants (1593/16 and 2577/20) from the Israel Science Foundation. 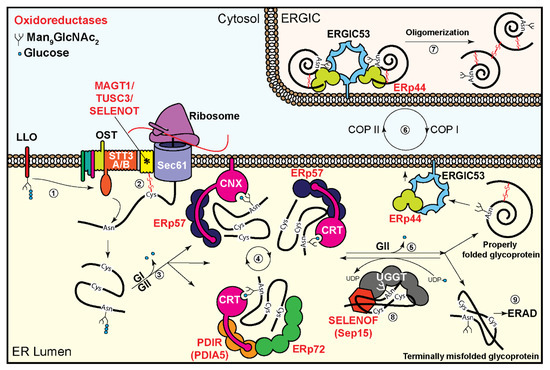