We elucidate the relevance of fibroblast growth factor 15 (FGF15) in liver transplantation (LT) using rats with both steatotic and non-steatotic organs from donors after cardiocirculatory death (DCD). Compared to LT from non-DCDs, the induction of cardiocirculatory death (CD) increases hepatic damage, proliferation, and intestinal and circulatory FGF15. This is associated with high levels of FGF15, bilirubin and bile acids (BAs), and overexpression of the enzyme involved in the alternative BA synthesis pathway, CYP27A1, in non-steatotic livers. Furthermore, CD activates the proliferative pathway, Hippo/YAP, in these types of liver. Blocking FGF15 action in LT from DCDs does not affect CYP27A1 but causes an overexpression of CYP7A, an enzyme from the classic BA synthesis pathway, and this is related to further accumulation of BAs and exacerbated damage. FGF15 inhibition also impairs proliferation without changing Hippo/YAP. In spite of worse damage, steatosis prevents a proliferative response in livers from DCDs. In steatotic grafts, CD does not modify CYP7A1, CYP27A1, BA, or the Hippo/YAP pathway, and FGF15 is not involved in damage or proliferation. Thus, endogenous FGF15 protects against BA accumulation and damage and promotes regeneration independently of the Hippo/YAP pathway, in non-steatotic LT from DCDs. Herein we show a minor role of FGF15 in steatotic LT from DCDs.
Keywords: cardiocirculatory death; FGF15; liver transplantation; steatotic liver grafts; ischemia-reperfusion damage cardiocirculatory death; FGF15; liver transplantation; steatotic liver grafts; ischemia-reperfusion damage

Every year, many thousands of deaths result from liver failure that could not be treated due to the lack of suitable donor organs [1]. To better meet clinical demand, the use of livers from donors after cardiocirculatory death (DCDs) is being explored. However, the high incidence of hepatic dysfunction and biliary complications caused by disruption of the blood supply during the donor warm ischemia time after cardiocirculatory death (CD) hinders the utilization of these grafts to liver transplantation (LT) [2,3,4]. In addition, the use of organs from extended criteria donors has increased, including those with hepatic steatosis, due to its high worldwide prevalence [5]. Unfortunately, hepatic steatosis is one of the most important risk factors that negatively affect post-operative outcomes [6].
Fibroblast growth factor 15 (FGF15), along with its human homolog (FGF19), collectively referred to as FGF15/19, regulates bile acids (BAs) [7]. In brief, the ileal enterocytes induce the expression of FGF15/19, which is secreted into the enterohepatic circulation [8]. Through the hepatic fibroblast growth factor receptor 4 (FGFR4) signaling pathway, BA levels are tightly controlled by the enzyme cytochrome P450 7A1 (CYP7A1), the first and rate-limiting step in the classic BA synthesis pathway [9]. In addition to maintaining BA homeostasis, FGF15 regulates liver regeneration through Hippo/Yes-associated protein (YAP) signaling [10,11]. Indeed, the mammalian sterile-20 kinase 1/2 (MST1/2) activates the large tumor suppressor 1/2 (LATS1/2), that phosphorylates YAP [12]. Phospho-YAP is either degraded or sequestered in the cytoplasm [13]. When the Hippo pathway is off, YAP translocates to the nucleus and turns on pro-proliferative and pro-survival genes, thereby enabling cell proliferation [14].
Changes in circulating FGF19 have been reported in patients with liver diseases, such as cirrhosis [15], and in pathologies associated with intestinal inflammation, such as ileal dysfunction due to Crohn’s disease [16]. Several lines of evidence demonstrate that various liver diseases, such as cirrhosis and bile duct ligation, alter BA synthesis by up-regulating the expression of CYP7A1 in the liver [17]. In addition, YAP mediates cell proliferation and regulated cell death and participates in the restoration of the heart after ischemia-reperfusion (I/R) [18]. Along the same lines, ablating YAP in the mouse liver enhances hepatocyte necrosis and suppresses hepatocyte proliferation after bile duct ligation [14].
This is the first study to analyze the effect of FGF15 derived from intestinal signaling in both steatotic and non-steatotic LT from DCDs. Understanding the essential components of this response may facilitate the development of hepatoprotective and pro-regenerative therapeutic strategies in steatotic and non-steatotic LT from DCDs.

This study was performed using homozygous (obese, Ob) and heterozygous (lean, Ln) male Zucker rats (Iffa Credo, France) aged between 10 and 11 weeks. Ob rats show moderate macrovesicular and microvesicular fatty infiltration in hepatocytes (40% to 60% steatosis), whereas Ln rats show no evidence of steatosis [19]. All procedures were approved by the Laboratory Animal Care and Use Committee of Barcelona University and by the government of Catalonia (DAAM 9353). European Union regulations (Directive 86/609 EEC) for animal experiments were respected.

Animals were anesthetized by isoflurane and heparin sodium solution was administered to donors. A well-established rodent CD model was selected: induction of CD by hypoxia through an incision of the diaphragm and blocking the descending aorta [20,21]. The in situ warm ischemia period was 45 min.

Steatotic and non-steatotic liver grafts from DCDs and non-DCDs were flushed and stored in University of Wisconsin (UW) solution for 6 h. Standard orthotopic LT in Ln Zucker rats was performed according to the double cuff technique [19].

Plasma transaminases (aspartate aminotransferase (AST) and alanine aminotransferase (ALT)) were measured photometrically using standard procedures. Total bilirubin in plasma was determined by an enzyme-linked immune absorbent assay (MyBiosourse Inc., San Diego, CA, USA) according to the manufacturer’s instructions. Plasma and liver total BAs were determined by a colorimetric assay kit (Biovision, Milpitas, CA, USA).
Lipid peroxidation in the intestine was determined by measuring the formation of malondialdehyde (MDA) as an indirect index of the oxidative injury induced by the reactive oxygen species [24]. Briefly, 0.5 mL of 0.5% butylated hydroxytoluene was added to 2 mL of the intestine homogenate to prevent lipid autoxidation. For protein precipitation, 2 mL of 20% trichloroacetic acid was added to 2 mL of homogenate. After mixing and centrifuging, 1 mL of 0.67% thiobarbiturate solution was added to the supernatant and boiled for 60 min. After cooling, optical density at 530 nm was assayed [24].
Myeloperoxidase (MPO), was measured photometrically as an index of neutrophil accumulation, using tetramethyl-benzidine as a substrate. Intestine samples were macerated with 0.5% hexadecyltrimethylammonium bromide in 50 mM phosphate buffer pH 6.0. Homogenates were then disrupted for 30 s using a sonicator at 20% power and subsequently snap-frozen in dry ice and thawed on three consecutive occasions before a final 30-s sonication. Samples were incubated at 60 °C for 2 h and then spun down at 4000× g for 12 min. Supernatants were collected for the MPO assay. Enzyme activity was assessed photometrically at 630 nm. The assay mixture consisted of 20 μL supernatant, 10 μL tetramethylbenzidine (final concentration 1.6 mM) dissolved in dimethyl sulfoxide, and 70 μL H2O2 (final concentration, 3.0 mM) diluted in 80 Mm phosphate buffer, pH 5.4. An enzyme unit is defined as the amount of enzyme that produces an increase of 1 absorbance unit per minute [25].

To assess the severity of hepatic injury, paraffin-embedded liver sections were stained with hematoxylin and eosin, and blind histological scoring was performed by a board-certified pathologist, using a point-counting method on an ordinal scale, as follows: grade 0, minimal or no evidence of injury; grade 1, mild injury consisting of cytoplasmic vacuolation and focal nuclear pyknosis; grade 2, moderate to severe injury with extensive nuclear pyknosis, cytoplasmic hypereosinophilia, and loss of intercellular borders; grade 3, severe necrosis with disintegration of hepatic cords, hemorrhage, and neutrophil infiltration; grade 4, very severe necrosis with disintegration of hepatic cords, hemorrhaging, and neutrophil infiltration [19]. The severity of intestinal damage was scored on a scale from 0 to 5, as described by Chiu et al. [26]. Liver steatosis was visualized by Oil Red staining of liver cryosections. Liver tissues were frozen in optimal cutting temperature (OCT) compounds. The sections were fixed with 10% formalin and the slides were placed in 100% propylene glycol and stained in 0.5% Oil Red solution in propylene glycol. The slides were transferred to an 85% propylene glycol solution and processed for hematoxylin counterstaining. The percentage of steatosis was calculated by image analysis [24]. At least 30 high-power fields were counted per slide. The score described by Brunt et al. [27] is suitable for the assessment of the full spectrum of nonalcoholic fatty liver disease, including simple steatosis. This score is calculated as the weighted sum of the scores for steatosis (the % of liver cells containing fat, range 0–3; 0, <5%; 1, 5–33%; 2, >33–66%; and 3, >66%), ballooning (0–2), lobular inflammation (0–3), and fibrosis state (1, perisinuoidal or periportal; 2, perisunoidal and periportal; 3, briding fibrosis, and 4: cirrhosis). Thus, this score ranges from 0 to 8. The score described by Matteoni et al. [28] is defined as the following types: type 1, fatty liver alone; type 2, fat accumulation and lobular inflammation; type 3, fat accumulation and ballooning degeneration; type 4, fat accumulation, ballooning degeneration, and fibrosis. As previously reported [19,24,29,30], steatosis in Zucker rats used in the current study is not associated with inflammation. Ob rats exhibited moderate macrovesicular and microvesicular fatty infiltration in hepatocytes (40–60% steatosis) but no apparent inflammation or fibrosis. These observations in Ob rats correspond to grade 1 according to Brunt’s classification, and type 1 according to Metteoni’s classification [27,28].

Data are expressed as means ± standard error and were statistically analyzed via a one-way analysis of variance, followed by post hoc Student–Newman–Keuls test. p < 0.05 was considered significant.

3.1. Role of FGF15 in Recipients of Non-Steatotic and Steatotic Liver Grafts from DCDs

3.2. FGF15 Levels in Intestine and Plasma in LT from DCDs

Next, we evaluated the possible contribution of intestine in FGF15 signaling in LT from DCDs. Similar intestinal tissue histology and levels of MDA, MPO were found in the Sham, LT, and CD + LT groups, suggesting that there is no intestinal damage when LT is performed nor when CD is induced, in any type of liver (Figure 2B). Regarding FGF15, an intestinal rise in protein levels was observed in both non-steatotic and steatotic grafts in the CD + LT group when compared to levels recorded in the LT group. This pattern of levels of FGF15 in intestinal tissue was mirrored in circulatory FGF15: levels of FGF15 in plasma were higher in the CD + LT group compared to the LT group, in both non-steatotic and steatotic grafts (Figure 2A).

3.3. The Effects of FGF15 on the BA Synthesis Pathway in LT from DCDs

3.4. The Effect of FGF15 on the Hippo/YAP Signaling Pathway in Liver Grafts from DCDs after LT

3.5. FGF15 and Related Signaling Pathways in Liver Grafts from DCDs before Procurement 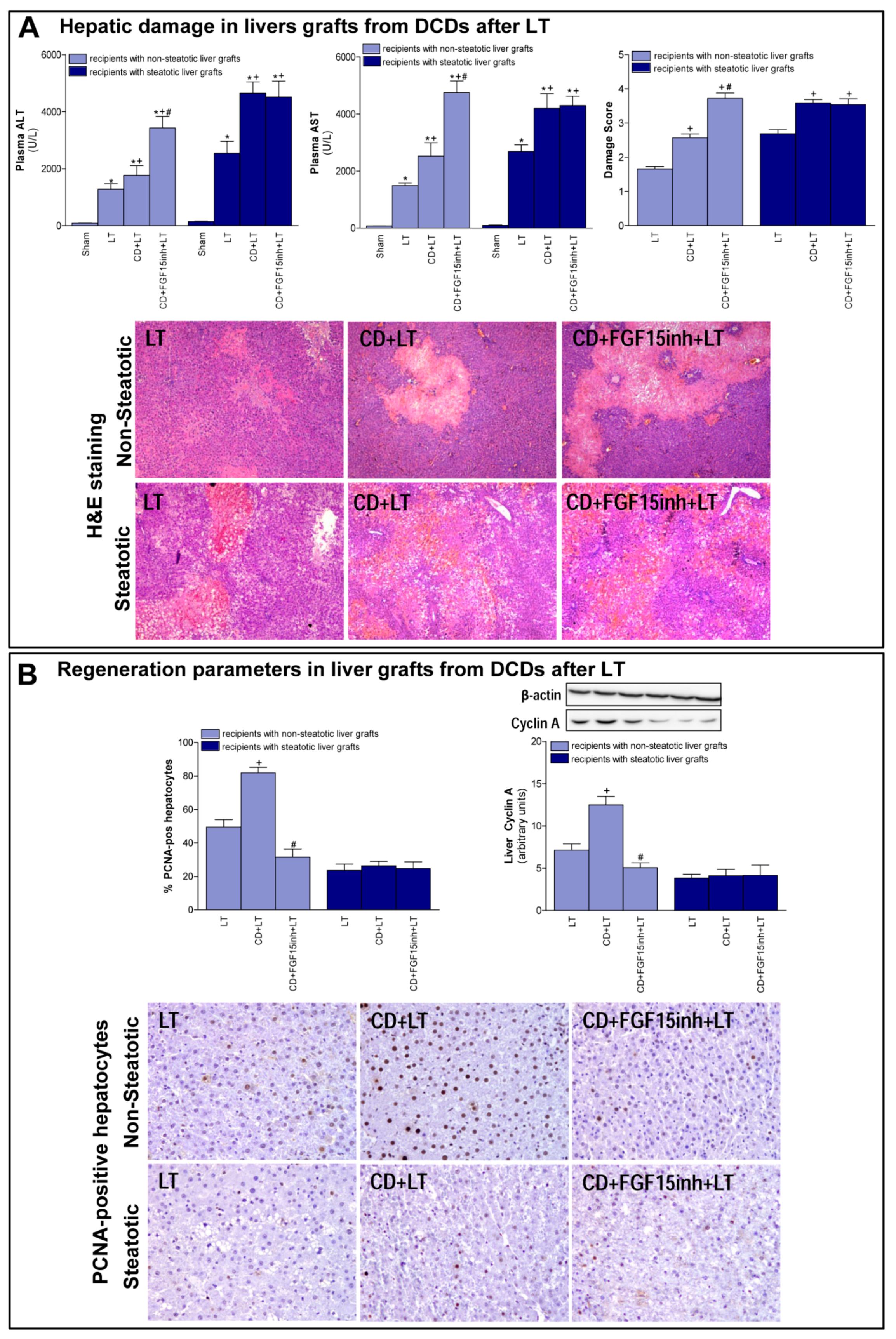 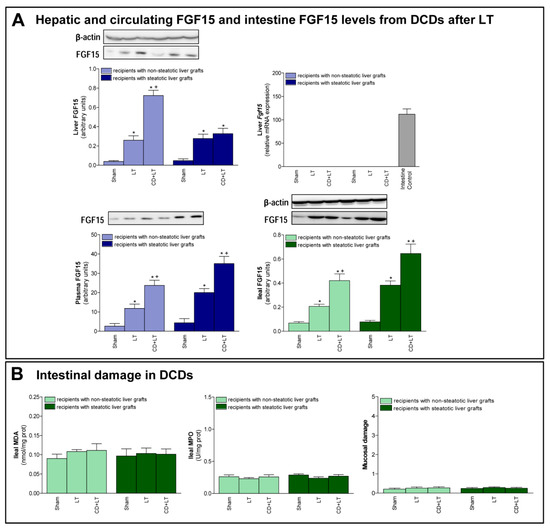 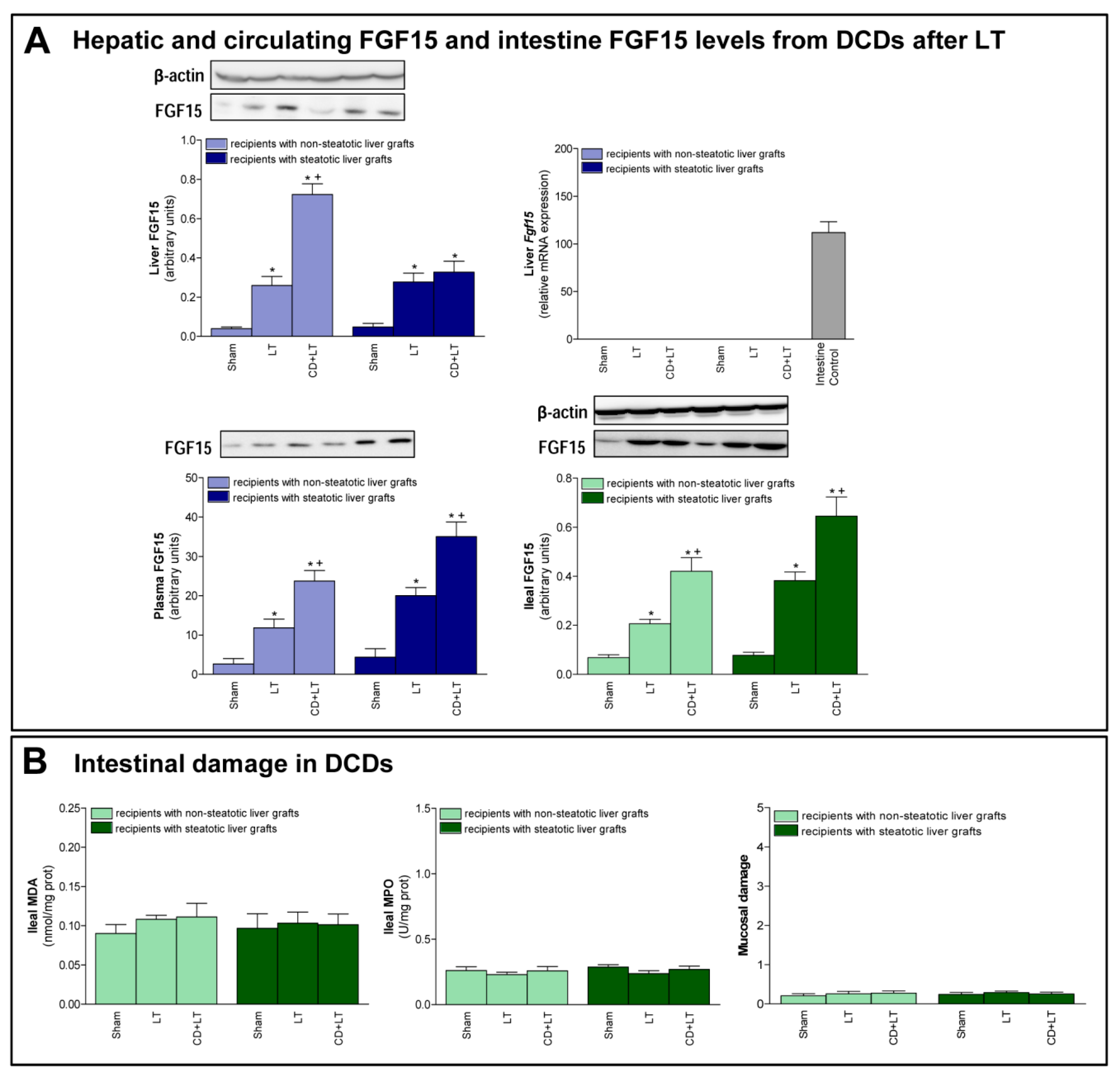 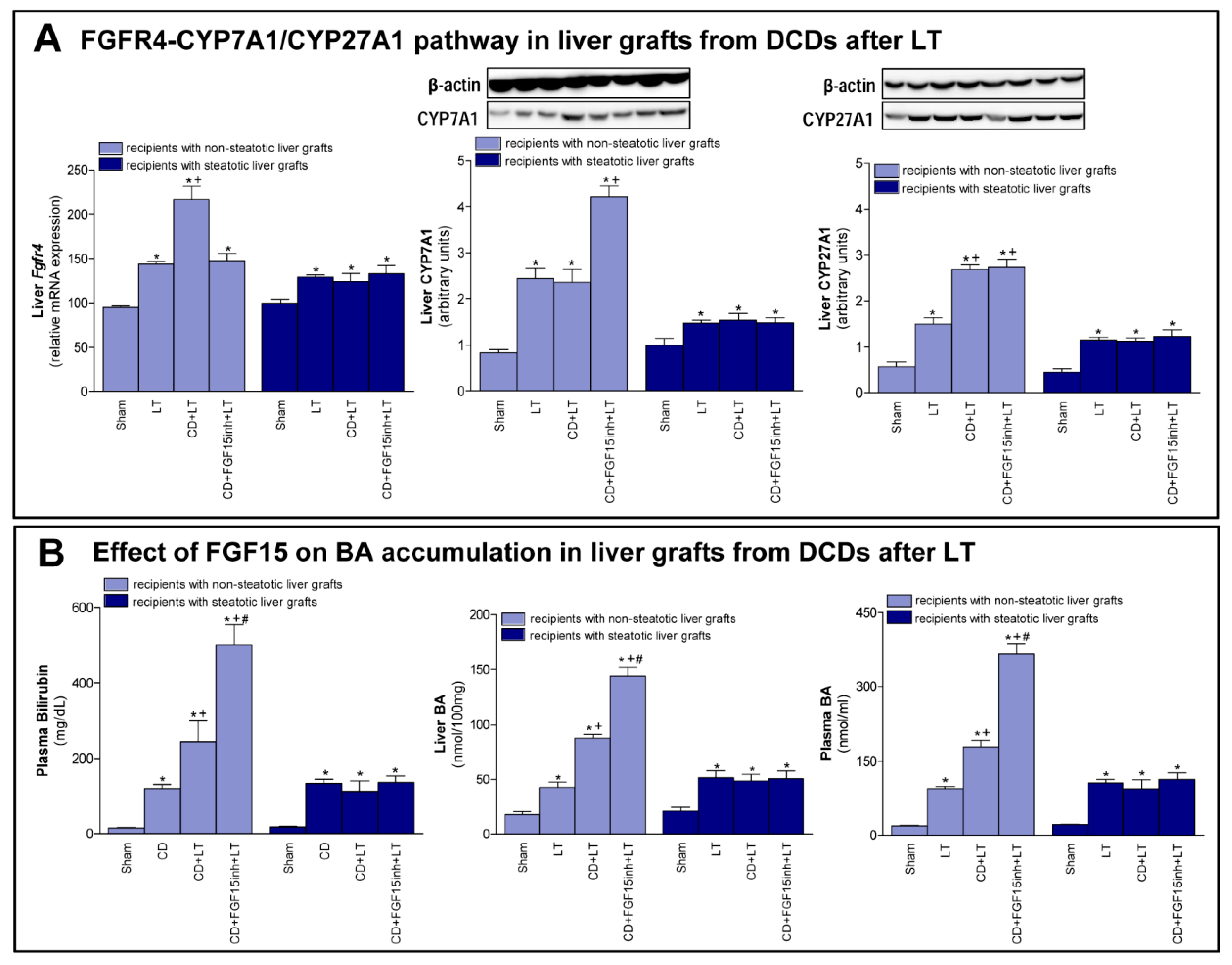 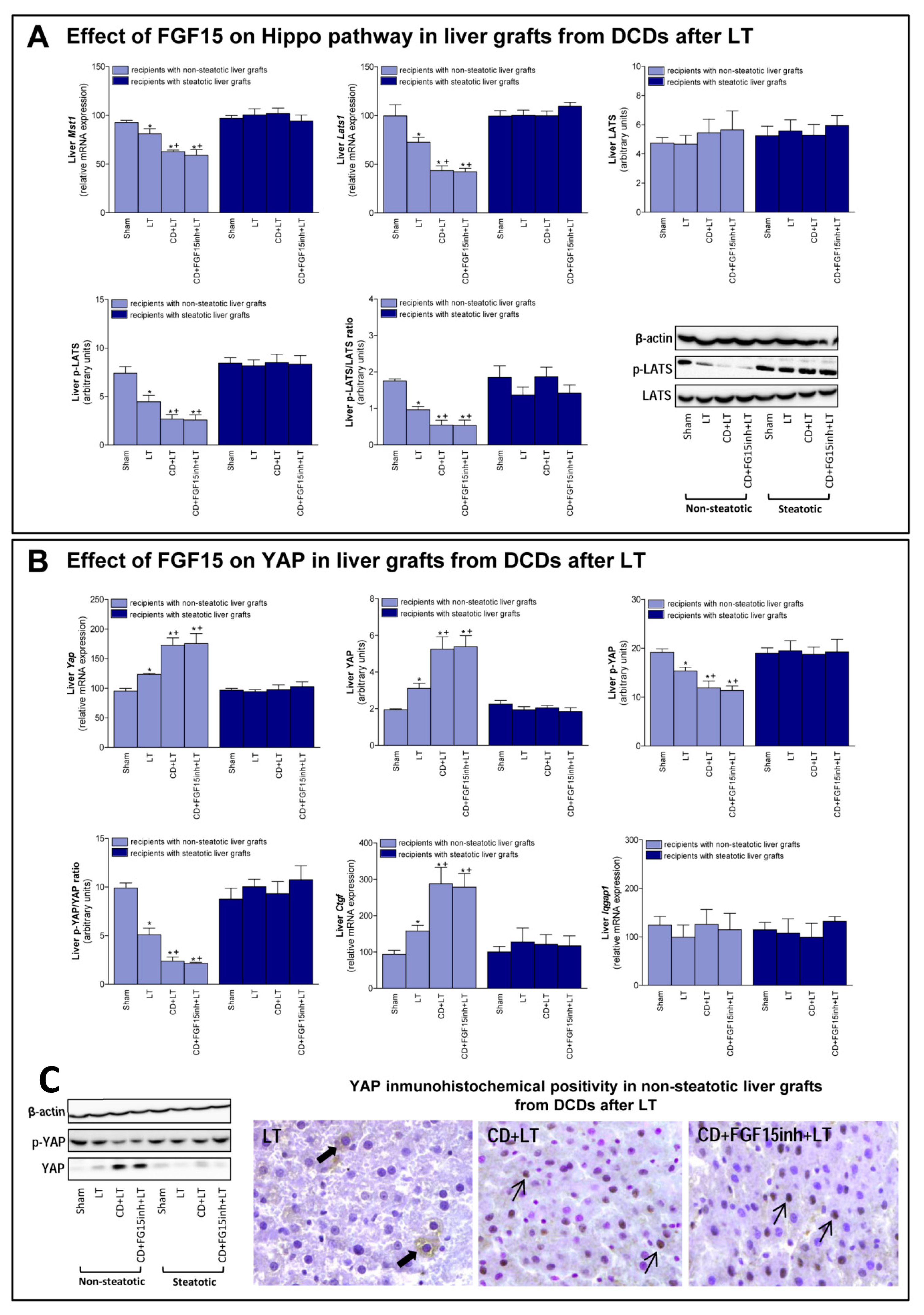