Tallgrass Prairie Responses to Management Practices and Disturbances: A Review

Olive anthracnose is a very common and severe disease caused by diverse species of fungi belonging to Colletotrichum acutatum and Colletotrichum gloeosporioides complexes. To understand aspects of the Colletotrichum colonization and primary infection in olives, Colletotrichum spp. were isolated from the interior of 2-year stems, flower buds, and immature fruits of three important olive cultivars, Galega vulgar, Cobrançosa, and Azeiteira, from different sites within Alentejo, a major olive-producing region in Portugal. A total of 270 trees was sampled, and 68 Colletotrichum spp. isolates were obtained from 46 olive trees. DNA extraction and amplification of β-tubulin and GADPH genes through PCR revealed that the vast majority of the isolates showed high similarity to Colletotrichum nymphaeae, and only three isolates showed high similarity to Colletotrichum godetiae. The highest number of Colletotrichum spp. isolates was detected in olive trees from Galega vulgar and in immature fruits. No significant differences in the number of Colletotrichum spp. isolates were found in trees from different sites. The highest percentages of infected immature fruits were obtained in trees that also presented a high percentage of 2-year stem infections, which may indicate that 2-year stems serve as important sources of inoculum, and the fungus may travel from the stems to other parts of the plant. Another indication of such possibility is that one isolate of C. nymphaeae (C. nymphaeae 2), characterized by a unique nucleotide mutation within the beta tubulin gene, was present in different organs of the same tree, both in 2-year stems and in recently formed vegetative organs as flower buds and immature fruits, which seem to suggest that it may be the same isolate, which has moved systemically inside the plant. The results presented here can play an important role in working out strategies for the effective and timely management of the disease and in reducing the number of unnecessary fungicide applications. View Full-Text
Keywords: anthracnose; olive cultivars; control; plant organs anthracnose; olive cultivars; control; plant organs
►▼ Show Figures 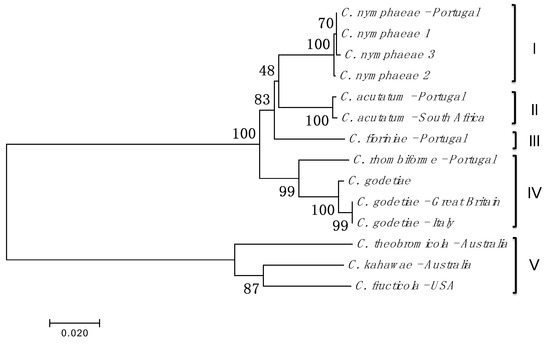