Rhodococcus erythropolis is an environmental Gram-positive Actinobacterium with a versatile metabolism involved in various bioconversions and degradations. Rhodococci are best known for their great potential in numerous decontamination and industrial processes. However, they can also prevent plant disease by disrupting quorum sensing-based communication of Gram-negative soft-rot bacteria, by degrading N-acyl-homoserine lactone signaling molecules. Such biocontrol activity results partly from the action of the γ-lactone catabolic pathway. This pathway is responsible for cleaving the lactone bond of a wide range of compounds comprising a γ-butyrolactone ring coupled to an alkyl or acyl chain. The aliphatic products of this hydrolysis are then activated and enter fatty acid metabolism. This short pathway is controlled by the presence of the γ-lactone, presumably sensed by a TetR-like transcriptional regulator, rather than the presence of the pathogen or the plant-host in the environment of the Rhodococci. Both the density and biocontrol activity of R. erythropolis may be boosted in crop systems. Treatment with a cheap γ-lactone stimulator, for example, the food flavoring γ-caprolactone, induces the activity in the biocontrol agent, R. erythropolis, of the pathway degrading signaling molecules; such treatments thus promote plant protection. View Full-Text
Keywords: Rhodococcus; biological control; soft-rot; quorum sensing; quorum quenching; lactonase Rhodococcus; biological control; soft-rot; quorum sensing; quorum quenching; lactonase
►▼ Show Figures 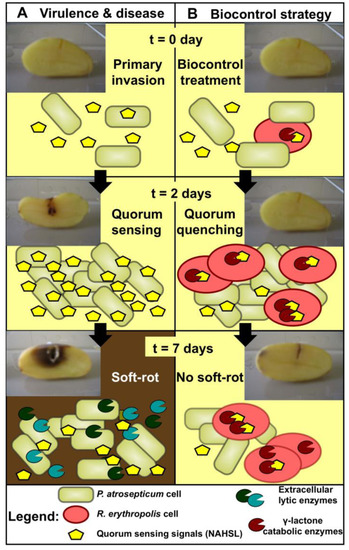