Chickpea (Cicer arietinum L.) is an important food legume, and is presently grown in more than 50 countries and imported by more than 150 countries [1]. It is the second largest grown and produced food legume after dry beans. During 2011, chickpea was grown on 13.2 million ha and about 80% of this area was in South and Southeast Asia (India 68%, Pakistan 8.9% and Myanmar 2.3%) [1]. The other major chickpea growing countries include Turkey, Australia, Ethiopia, Iran, Mexico, Canada and USA.
Chickpea is a poor competitor to weeds because of slow growth rate at early stages of crop growth and establishment [2]. Weeds compete with chickpea plants for water, nutrients, sunlight, and space and also harbor insect-pests and diseases. If left uncontrolled, weeds can reduce chickpea yield significantly. Weeds have become a serious problem in both autumn-sown and winter-grown chickpeas [2,3] and also if the crop is grown under irrigated conditions [4]. Significant yield losses (up to 84%) due to weeds have been reported in chickpea [5,6,7,8,9], more severely (up to 98%) in autumn-sown chickpea [2]. Thus, weed management is crucial in chickpea to realize maximum yields and also to maintain high quality of produce.
Hand weeding and mechanical weed control methods traditionally followed in the developing countries are becoming expensive due to increased labor wages. Because of the sensitivity of chickpea to herbicides, most effective are the pre-emergence herbicides, and choices for post-emergence herbicides are limited [2]. The pre-emergence herbicides are effective in controlling weeds at early stage of seedling growth, but weeds germinating after crop emergence become dominant in the field and cause substantial yield loses. Therefore, chickpea cultivars with improved herbicide tolerance, which can offer greater flexibility for use of post-emergence herbicides, are required by the farmers.
Herbicide tolerant cultivars have been developed in many crops, including some grain legumes, by exploiting available genetic variability in the germplasm or by inducing variability through mutagenesis, e.g., a variety “Coromup” in narrow-leaf lupin [10] and a variety “Tracy-M” in soybean [11] with improved tolerance to herbicide metribuzin were developed by screening the advanced breeding lines. In narrow-leaf lupin, two highly tolerant metribuzin mutants, Tanjil-AZ-55 and Tanjil-AZ-33, were identified [12]. Similarly in lentils, a variety “RH44” with tolerance to imidazolinone was developed by mutagenesis [13]. There are few reports on identification of herbicide tolerance in chickpea [14,15]. However, these reports indicate presence of genotypic variations for herbicide tolerance in chickpea.
This study was aimed at identifying sources of tolerance to herbicides imazethapyr (amino acid synthesis inhibitor) and metribuzin (photosynthesis inhibitor) by screening a diverse set of germplasm so that these could be utilized for development of herbicide tolerant cultivars. 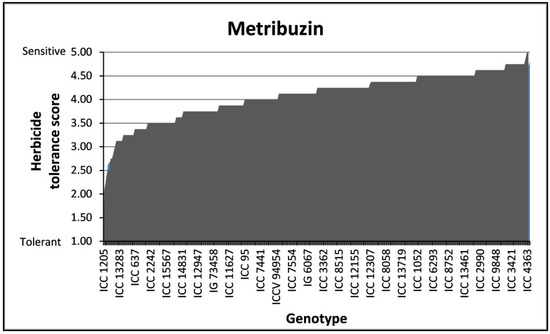 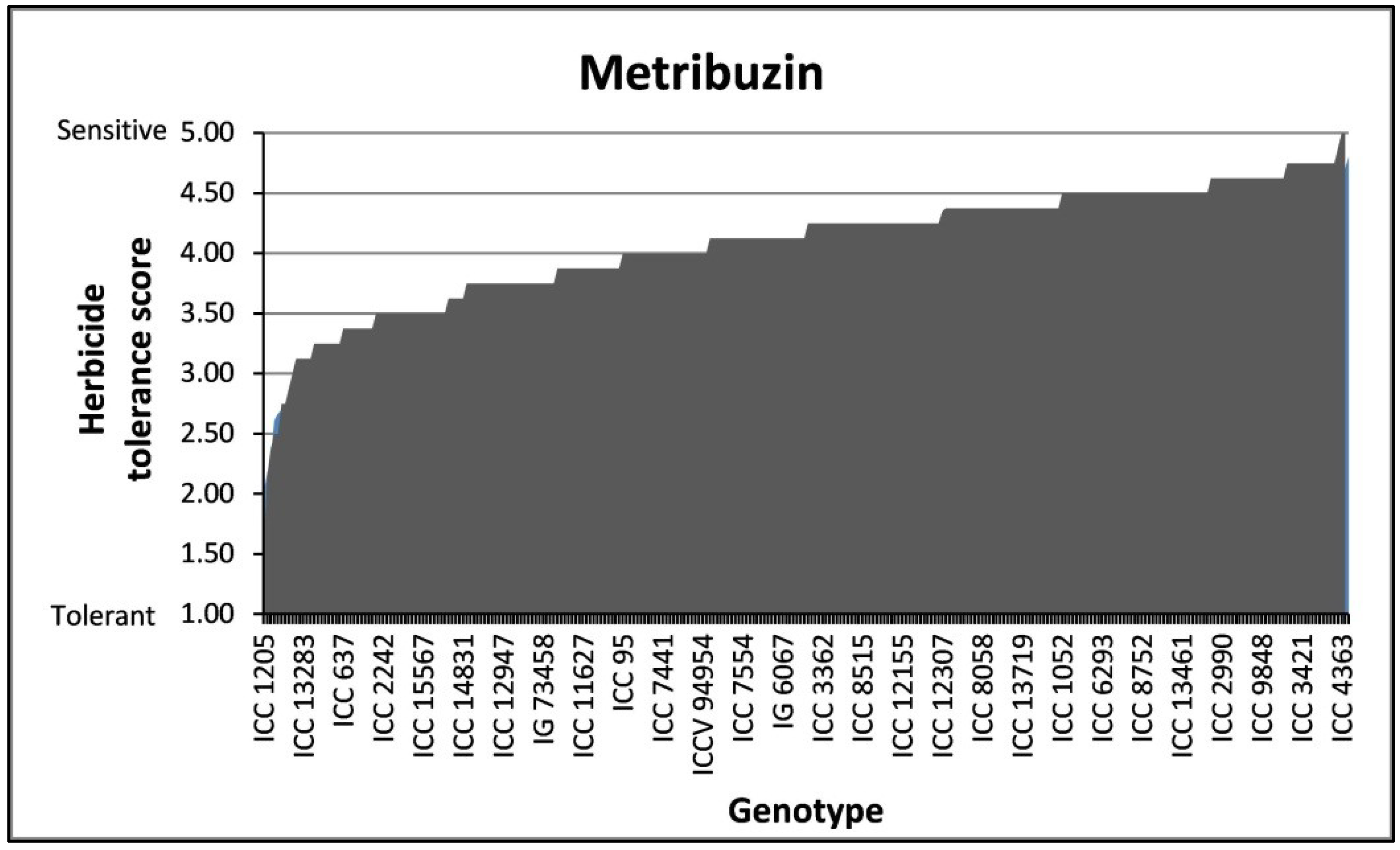 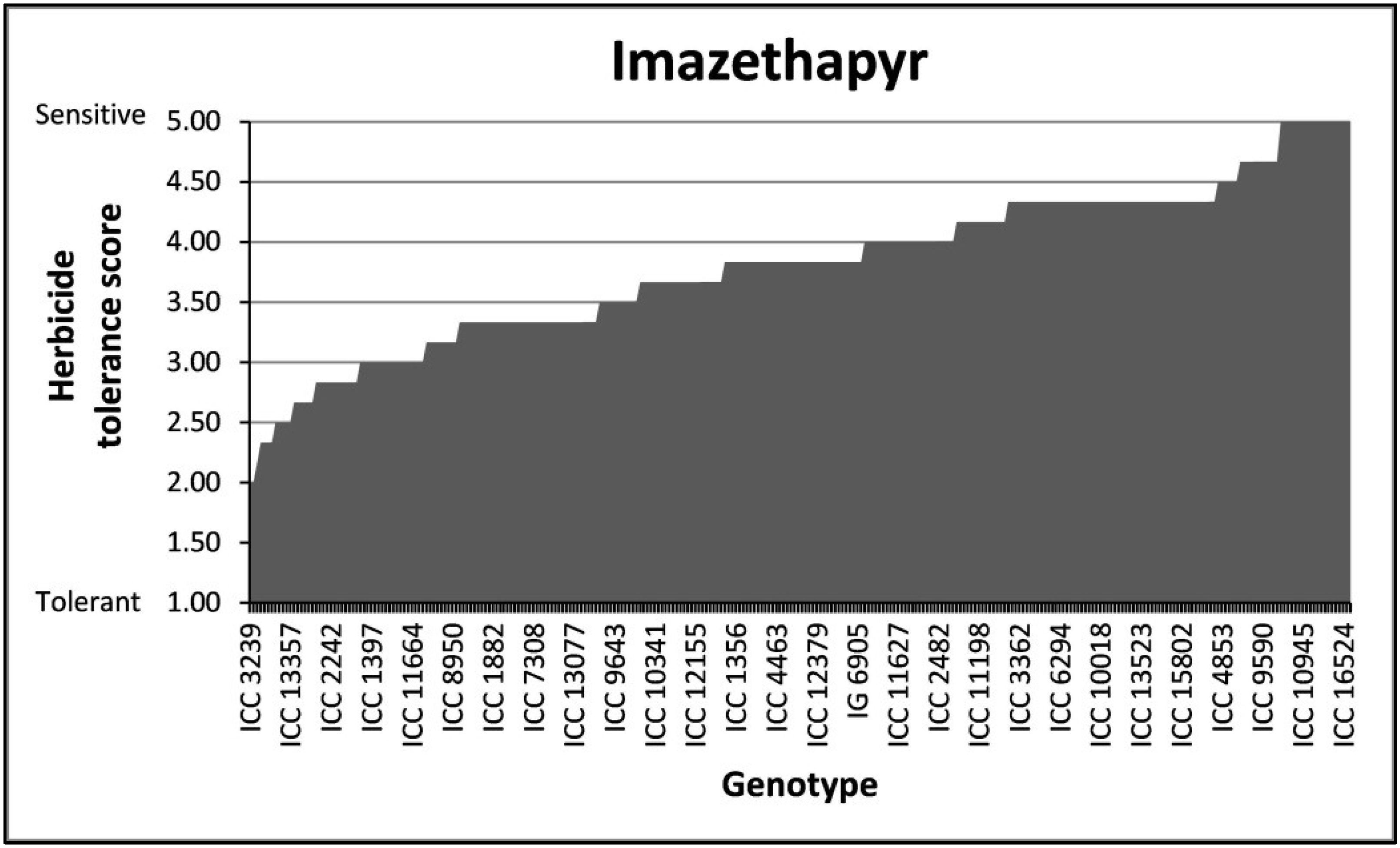 Table 1. Top ranking tolerant and sensitive chickpea genotypes for herbicides metribuzin and imazethapyr (Mean score ± SE on a scale from 1 to 5, where 1 = highly tolerant and 5 = highly sensitive).
Herbicides affected the vegetative growth of the susceptible lines. Metribuzin showed adverse effects on the lower leaves by causing necrosis followed by senescence. In highly susceptible genotypes, it caused complete death of the plants. Imazethapyr mainly killed the growing tips (epical meristem and young leaves) of the branches. Death of the plants was observed in highly sensitive genotypes. In moderately tolerant and tolerant genotypes, the death of epical meristem caused by imazethapyr induced branching. The effects were similar to that of the removal of shoot tips (called nipping), a general practice for inducing branching in chickpea. For both the herbicides, the most sensitive lines had 80% to 100% mortality (for example Line number 2 in Figure 3). Other abnormalities included elongation of branches (similar to tendrils) with very small or needle shaped leaves, delaying of flowering, deformation of flowers, poor pod setting and reduction in pod and seed size. Secondary growth was observed in many lines 20–25 days after herbicidal application leading to flowering and pod set. 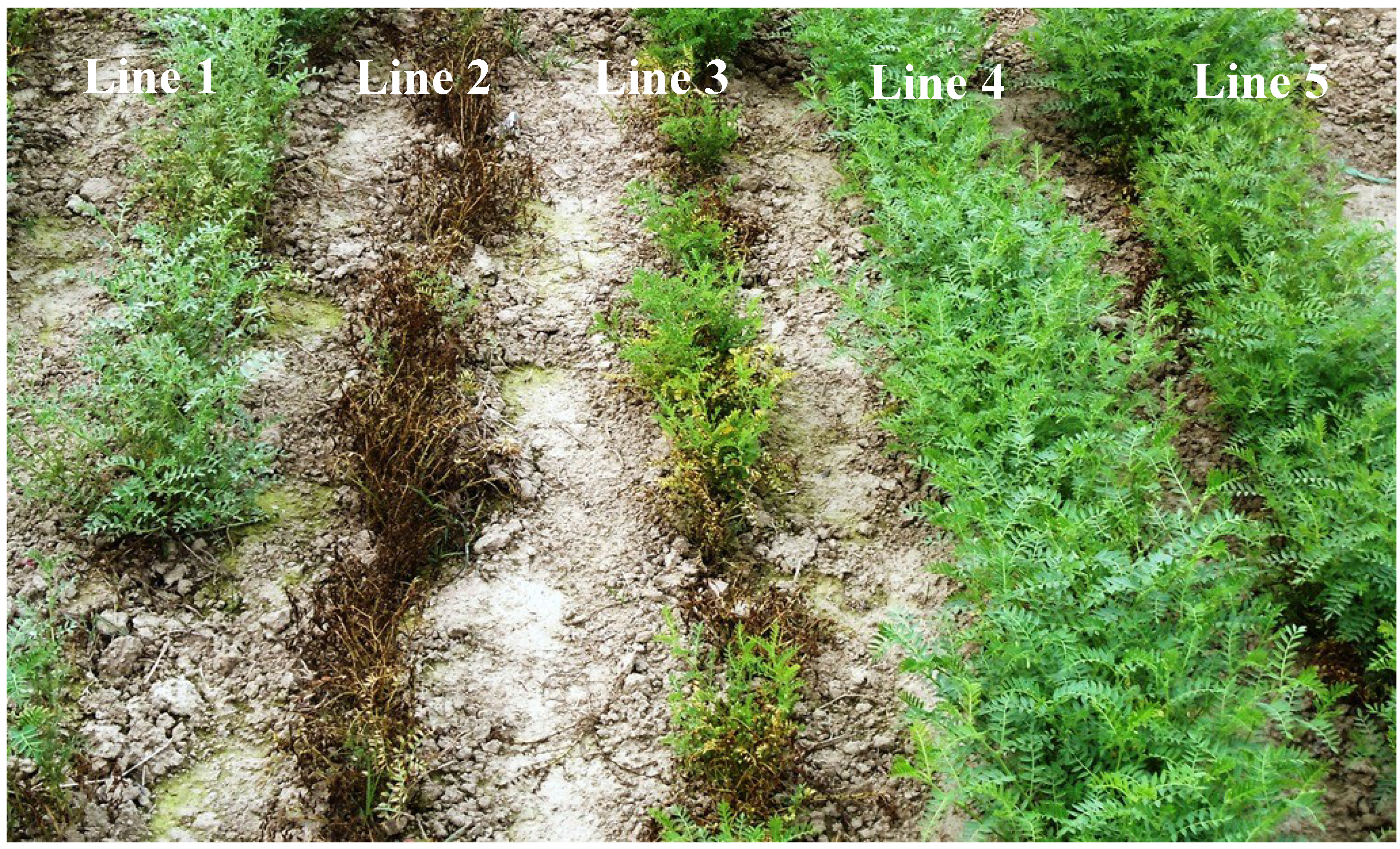 The response of 11 tolerant to moderately tolerant (score 2–3) and 3 highly sensitive (score 5) genotypes for resistance to imazethapyr was confirmed by repeating screening of these genotypes at IIPR-Kanpur (Table 2). The herbicide tolerance scores in the repeat experiment were almost similar to those obtained in the first experiment.

Table 2. Comparison of herbicide tolerance scores from the two experiments conducted at IIPR, Kanpur (Mean score ± SE on a scale from 1 to 5, where 1 = highly resistant and 5 = highly sensitive).
In the present study, several monocot and dicot weeds were observed in the field but dicot weeds were predominant. The effect of herbicidal application on weeds was also recorded. The data on weed population were used to identify dominant weed species at three locations: ICRISAT-Patancheru, IARI-New Delhi and PAU-Ludhiana. The dominant weed species observed at Patancheru, were Cirsium spp., Convolvulus arvensis L., Medicago lupulina L. and Parthenium hysterophorus L. The density of these weed species ranged from 3 to 8 plants/m2. The highest density (8 plants/m2) was for Convolvulus arvensis L. Other weed species recorded at ICRISAT-Patancheru, were Cyperus rotundus L., Vicia sativa L., Tribulus terrestris L., Euphorbia spp., Amaranthus sp., Chenopodium album L. and Cardiospermum halicacabum L. Similarly, the dominant species identified at IARI-New Delhi were Convolvulus arvensis L, Chenopodium murale L., Cyperus rotundus L. and Fumaria parviflora Lam. The density of these weed species ranged from 3.3 to 9.1 plants/m2. Chenopodium murale L. recorded the highest density of 9.1 plants/m2. Thus, Chenopodium spp. were found common in chickpea fields at both the locations. Based on data recorded at ICRISAT-Patancheru on weed numbers, both pre- and post-emergence application of imazethapyr controlled 75%–80% of major dominant weeds. The treatment was very effective especially on Cirsium spp., and Parthenium hysterophorus L. At PAU-Ludhiana, the major weed (about 98% of total weeds) found was railway creeper (Oenothera drumundii Hook), a broad-leaf weed. The tested herbicide (metribuzin) controlled this weed effectively.

A total of 300 chickpea genotypes were used in this study. These included 278 genotypes from the reference collection and 22 cultivars/advanced breeding lines developed at the International Crops Research Institute for the Semi-Arid Tropics (ICRISAT), Patancheru. The complete reference collection (n = 300) could not be included in this study because adequate quantity of seed was not available for 22 accessions (all accessions of wild species and few accessions of the cultivated species). The genotypes studied originated from 30 countries and over 80% of the accessions were landraces (Table 3). According to the types of chickpea, 69% were desi type (colored seed coat), 28% kabuli type (white seed coat) and 3% intermediate type (pea-shaped seed).
The experiment was conducted during post-rainy season 2011–2012 at four locations in India—ICRISAT, Patancheru (17°52' N, 78°24' E); Indian Institute of Pulses Research (IIPR), Kanpur (26°28' N, 80°24' E); Indian Agricultural Research Institute (IARI), New Delhi (28°36' N and 77°12' E); and Punjab Agricultural University (PAU), Ludhiana (30°55' N, 75°54' E). The screening for tolerance to metribuzin was carried out at IARI-New Delhi and PAU-Ludhiana and for imazethapyr at ICRISAT-Patancheru and IIPR-Kanpur. Sowing was done during 2011 on 2 October at ICRISAT-Patancheru, 28 September at IIPR-Kanpur, 5 November at IARI-New Delhi, and 2 December at PAU-Ludhiana. The experiment was conducted in the field in a randomized block design (RBD) with 3 replications at ICRISAT-Patancheru and 2 replications at other locations. The plants were grown on 1-m long rows (2-m rows at IIPR Kanpur) with 30 cm spacing between rows and 10 cm between plants.
An experiment was initially conducted to identify optimum rate for herbicide application. Three rates, 50%, 100% and 150% of the recommended rate given on the label, were used. We found that the rate given on the label recommendation is effective in controlling most of the weeds and differentiating chickpea genotypes for herbicide tolerance. Thus, as per the label recommendation the herbicides metribuzin (Sencor: Bayer) and imazethapyr (Pursuit: BASF) were uniformly sprayed at the rate of 250 g ha−1 and 750 mL ha−1 respectively, 30-days after sowing using a shoulder-mounted hand operated knapsack sprayer. The spray solution was sprayed at 375 L ha−1 for both herbicides. For uniform spread and absorption, imazethapyr was mixed with Cyboost (700 g per ha) and Cyspread (565 mL per ha) in the spray solution. The spraying was done during cooler hours of the day when there was little or no wind. The plants were scored for herbicide tolerance 2-weeks after spray on a 1–5 scale; where 1 = highly tolerant (excellent plant appearance, no burning/chlorosis of leaves), 2 = tolerant (good plant appearance with minor burning/chlorosis of leaves), 3 = moderately tolerant (fair plant appearance with moderate burning/chlorosis of leaves), 4 = sensitive (poor plant appearance with severe burning/chlorosis of leaves), and 5 = highly sensitive (complete burning of leaves leading to plant mortality). The average scores from different replications were used to identify tolerant and sensitive lines.
No weeding was done prior to or post herbicidal application. Observations on weeds were recorded at three locations, ICRISAT-Patancheru, IARI-New Delhi and PAU-Ludhiana. The dominant weed species were identified at these locations. The data were recorded on kinds and number of weeds before and after the herbicide spray. The density of different weeds per m2 was determined from 10 locations in the experimental field.
A set of 14 lines (11 tolerant + 3 sensitive) from the first experiment (described above) was again screened at IIPR-Kanpur for tolerance to imazethapyr to verify the herbicide tolerance reaction observed in the first experiment. This second experiment was planted on 22 November 2011. The experimental procedure was similar to those explained above.

We thank BV Rao at ICRISAT-Patancheru, Arvind Singh Yadav at IIPR-Kanpur, Keshav Rai and Mangat Ram at PAU-Ludhiana, and SK Chauhan at IARI-New Delhi for technical support in conduct of the experiment. This study was funded by CGIAR Research Program on Grain Legumes at ICRISAT and by core research grant of IIPR, PAU and IARI.

The authors declare no conflicts of interest in this work.