Palmer amaranth (Amaranthus palmeri S.Wats) is a highly aggressive dioecious row crop weed in the Southeastern US [1]. It has several unique weedy characteristics including rapid growth of >5 inches a day during peak growth and can attain a final height of ≥2 m [2]. It is a prolific seed producer; a single female plant can produce more than 600,000 seeds, which have an average diameter of 1.0 mm [3]. In addition, Palmer amaranth has exceptional drought–tolerance and can endure moisture stress very well [4,5,6,7].
Palmer amaranth is highly problematic and interferes with the production of crops such as cotton, corn (Zea mays L.), cucurbits, grain sorghum (Sorghum bicolor L. Moench), peanut (Arachis hypogea L.), potato (Solanum tuberosum L.), soybean (Glycine max L.), sweet potato (Ipomoea batatas L.) and several vegetable crops [8,9,10,11,12,13,14,15,16,17,18,19,20,21].
The occurrence of glyphosate resistance in Palmer amaranth has challenged cotton-weed managers in the Southeaster US. Until 2005, glyphosate had been very efficacious on Palmer amaranth [22,23,24]. However, the extensive adoption of glyphosate-resistant technology virtually replaced the conventional weed control technology consisting of preplant incorporated (PPI), preemergence (PRE), postemergence (POST) and post-directed (PDS) applied herbicides [25]. The sole reliance on glyphosate has resulted in selection for resistant biotypes of Palmer amaranth. Glyphosate resistant in Palmer amaranth was first documented in Macon County Georgia, in 2006 [26,27]. As of 2010, glyphosate-resistant Palmer amaranth populations have been confirmed in 10 states [28]. Additionally, the Palmer amaranth populations resistant to dinitroaniline herbicides have been also reported [28,29].
Historically, cotton was grown in conventional tillage utilizing primary and secondary tillage including moldboard plowing, disking and cultivation. However, increasing input costs, low commodity prices, and concerns for declining soil organic quality, and in some regions subsoil compaction, necessitated the adoption of alternative tillage options such as strip-tillage production systems that utilize a within row subsoiler to disrupt soil compaction under the crop row and minimizes surface residue disturbance [30,31]. Consequently, inadequate weed control has been reported in some conservation-tillage cotton production [32]. The infestation of small-seeded annual weeds such as Palmer amaranth has often been attributed to conservation tillage systems that preclude burial of weed seed. Moldboard plowing with soil inversion to the depth of 30 cm (12 in) has been shown to reduce glyphosate-resistant Palmer amaranth emergence 46% to 60% because many of the weed seeds are placed at depths which prevent emergence [33,34]. However, the return to conventional tillage to control glyphosate-resistant Palmer amaranth threatens to reduce conservation tillage practices. Some researchers [35,36] advocate the integration of traditional and alternative weed control strategies, such as the utilization of crop and herbicide rotation and integration of high residue cereal cover crops in order to sustain conservation tillage practices.
Over the last decade, the inclusion of cover crops in conservation-tillage systems has been researched due to the ability of some cover crops to suppress early-season weed density and growth either through direct competition from cover crop biomass [37,38,39,40,41] or through allelopathy [42,43,44,45,46,47]. Cereal rye (Secale cereale L.) has been well documented for both high biomass potential and allelopathic properties by several researchers [42,43,48,49,50,51,52]. Several studies on cover crops have reported excellent early-season weed control that can preclude the use of preemergence herbicides in crops [39,41,52,53,54,55,56,57,58,59]. However, the success of a cover crop in early-season weed suppression is determined by the biomass production potential which varies with year, location and management practices [37,48,53,56,60]. It has been observed that cereal rye residue alone was effective in reducing the glyphosate-resistant Palmer amaranth emergence by 94% in the row middle and 50% within the row [34]. The use of high residue cover crops in conjunction with chemical and cultural weed control tactics could provide effective Palmer amaranth control in established glyphosate-resistant populations as well as help prevent the development of resistance in the remaining glyphosate-susceptible populations [61]. Thus, the inclusion of cover crops in conservation tillage system may provide weed control benefits similar to those realized from inversion tillage in conventional tillage system.
With the widespread appearance of glyphosate–resistant Palmer amaranth, cotton producers are considering other weed management options such as inversion tillage, surface tillage, and increased integration of soil active herbicides, cover crops and adoption of alternative GMO herbicide-crop systems such as glufosinate resistant cotton technology. Although inversion tillage can improve control of glyphosate-resistant Palmer amaranth, increased input costs and potential soil erosion are significant challenges. However the integration of cover crops and glufosinate-resistant cotton technology are possible viable alternatives. Therefore, a field study was conducted to evaluate the role of soil inversion, cover crops and herbicide regimes for Palmer amaranth management in glufosinate-resistant cotton.

A three year field experiment was conducted from fall 2008 through 2011 at the E.V. Smith Research Center, Field Crops Unit near Shorter, AL on a Compass sandy loam soil (coarse-loamy, siliceous, subactive, thermic Plinthic Paleudults) with 1.9% to 2.1% organic matter and pH 6.2 to 6.4. The experiment occupied a site that had been in continuous strip-tillage for the previous six years prior to experiment establishment, infested with a mixed population of resistant and susceptible Palmer amaranth, and subsequent treatments remained in the same location for three years without re-randomization of treatments. The experimental design consisted of a split-split plot treatment restriction in a randomized complete block design with three replicates. The main plots (43.9 by 9.1 m) were two soil-inversion treatments: fall inversion tillage (IT) and non-inversion tillage (NIT). After establishment, all IT plots reverted to NIT in future years. The subplots (14.6 by 9.1 m) were three different cover crops: crimson clover, cereal rye and winter fallow. The sub subplots (3.6 by 9.1 m) were four different herbicide regimes: preemergence (PRE) alone, postemergence (POST) alone, PRE + POST, and a no-herbicide check (None). A schedule of operations performed each year is given in Table 1.

Table 1. Schedule of operations performed during the experiment.

In the fall 2008, approximately 28 million native glyphosate susceptible Palmer amaranth seeds were broadcast per hectare to ensure a sizeable seedbank. Half of each replicate was subjected to fall inversion tillage (IT) by moldboard plowing (30 cm) immediately fb one pass each of a disk and field cultivator, and half was under non-inversion tillage (NIT) using a within-row subsoiler equipped with pneumatic tires only to close the subsoiling slot. Subsequently each year in the fall, cereal rye (var. “Elbon” in 2009 and 2010 and “Wrens Abruzzi” in 2011) and crimson clover (Trifolium incarnatum L.) var. ‘Dixie‘ cover crops were planted using 101 and 28 kg ha−1 seed, respectively in both the IT and NIT. Different cereal rye varieties were planted due to seed availability; Wrens Abruzzi has been shown to be more allelopathic [62]. In 2009 and 2010, frequent rain delayed both the harvesting of cotton and subsequent planting of cover crops [36]. Cereal rye cover was fertilized using 34 kg·ha−1 of a 33-0-0 fertilizer. A winter fallow control was also included as check.
Cover crops were rolled with a three section straight bar roller/crimper (Bigham Brothers, Inc., Lubbock, TX, USA) in late April or early May using a JD 7730 equipped with an AutoSteer GPS. Cover crop rolling was immediately followed by an application of glyphosate (Roundup Weathermax®, Monsanto Company, St. Louis, MO, USA) at 0.84 kg ae ha−1 plus glufosinate (Ignite®, Bayer Crop Science, Research Triangle Park, NC, USA) at 0.49 kg ae ha−1. The mixture was needed to enhance crimson clover termination. Cover crop biomass samples were taken prior to desiccation and oven dry biomass was recorded. The entire experimental area was sub-soiled in May using the previously described equipment to remove hardpan induced interactions; thus, no hardpans existed throughout the experimental area which could likely bias the yield results. Subsoiling was followed by planting of glufosinate-resistant cotton (FM 1845 LLB2 in 2009, and FM 1735 LL, in 2010 and 2011, Bayer Crops Science, Research Triangle Park, NC). Each year, cotton was fertilized using 211 kg·ha−1 of 16-16-16 fertilizer at the time of planting.

Palmer amaranth density was recorded once before the application of POST and again before the LAYBY application. Between-row (BR) Palmer amaranth densities were recorded as number of plants in a quadrat (0.25 m−2) randomly placed at 4 different positions between the 2nd and 3rd row of a four-row cotton plot. Similarly, the within-row (WR) Palmer densities were recorded from a quadrant (0.25 m−2) randomly placed at 4 different positions within the 2nd and 3rd rows. Palmer amaranth control was assessed visually at weekly intervals, starting a week after application of PRE until LAYBY application. A 0–100 scale was used where 0 and 100 indicate no control and complete control, respectively. Each year, the Palmer amaranth was hand removed from all the plots before application of LAYBY to facilitate harvest. Therefore, Palmer amaranth was 100% controlled in each plot after LAYBY until cotton harvest. Cotton yields were recorded by mechanically harvesting two center 9 m rows within each four-row plot with a spindle picker.

Analysis of the three year data revealed significant effect of type of cover crop only. Averaged over three years, the maximum cover crop biomass was produced by cereal rye (4047 kg·ha−1) fb crimson clover (3570 kg·ha−1) that was significantly more than and winter fallow (1253 kg·ha−1).

Palmer amaranth densities at 2 WAP revealed significant year by treatment interactions. Therefore data are presented by year. A soil-inversion by cover crop interaction was observed for both BR and WR densities at 2 WAP in 2008–2009 and 2010–2011 while only the IT main effect was significant in 2009–2010. The highest BR and WR densities of 49 and 35 plants m−2, respectively, occurred in winter fallow following NIT in 2009–2010 (Table 2).

Table 3. Influence of soil–inversion and herbicide regime on Palmer amaranth density at 6 WAP * and cotton yield with cover crop and three production years’ data combined.
* Abbreviations: WAP, weeks after cotton planting; BR, between row; WR, within row; PRE, only preemergence; POST, only postemergence; PRE + POST, both preemergence and postemergence; ** Means within a column followed by same letter are not significant (P = 0.05).
The Palmer amaranth density, both BR and WR, was reduced ≥77% in no-herbicide regime (None) following IT when compared to no–herbicide regime following NIT. The PRE and PRE + POST herbicide regimes in both IT and NIT reduced BR and WR densities ≥96%. With the cover crop by herbicide regime interaction, the BR density was reduced ≥55% in no-herbicide (None) following either cereal rye or crimson clover when compared to no-herbicide in the winter fallow (Table 4). 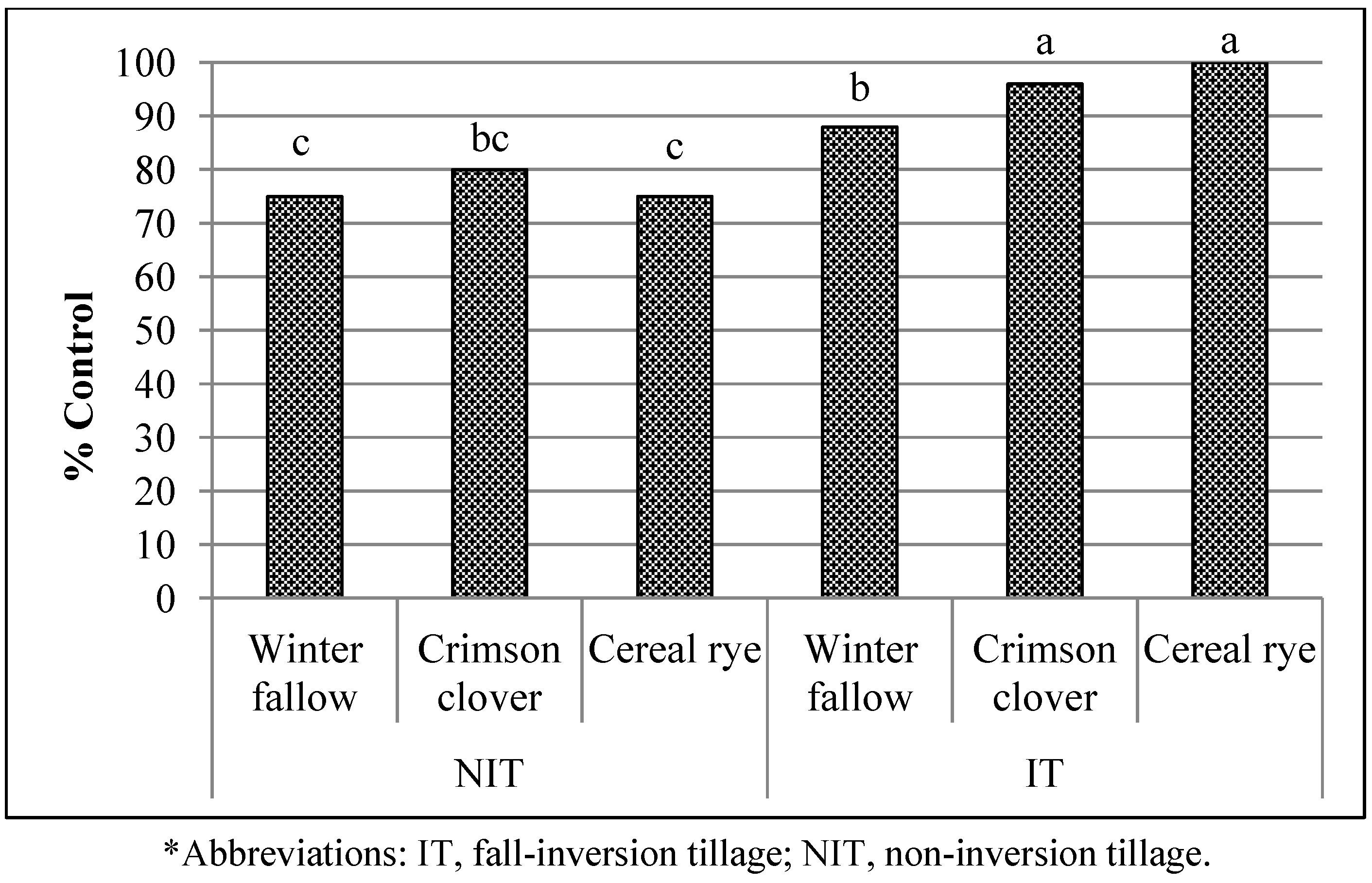 We wish to thank Trent Morton, USDA ARS NSDL, and the station personnel at the E. V. Smith and Tennessee Valley Research and Extension Centers for their technical assistance in this study. This work was partially supported by the Alabama Famer’s Federation Cotton Commission.

Mention of a trade name, proprietary product, or specific equipment does not constitute a guarantee or warranty by the USDA or Auburn Univ. and does not imply endorsement of a product to the exclusion of others that may be suitable.