Phytophthora nicotianae is a devastating oomycete plant pathogen with a wide host range. On tobacco, it causes black shank, a disease that can result in severe economic losses. Deployment of host resistance is one of the most effective means of controlling tobacco black shank, but adaptation to complete and partial resistance by P. nicotianae can limit the long-term effectiveness of the resistance. The molecular basis of adaptation to partial resistance is largely unknown. RNAseq was performed on two isolates of P. nicotianae (adapted to either the susceptible tobacco genotype Hicks or the partially resistant genotype K 326 Wz/Wz) to identify differentially expressed genes (DEGs) during their pathogenic interactions with K 326 Wz/Wz and Hicks. Approximately 69% of the up-regulated DEGs were associated with pathogenicity in the K 326 Wz/Wz-adapted isolate when sampled following infection of its adapted host K 326 Wz/Wz. Thirty-one percent of the up-regulated DEGs were associated with pathogenicity in the Hicks-adapted isolate on K 326 Wz/Wz. A broad spectrum of over-represented gene ontology (GO) terms were assigned to down-regulated genes in the Hicks-adapted isolate. In the host, a series of GO terms involved in nuclear biosynthesis processes were assigned to the down-regulated genes in K 326 Wz/Wz inoculated with K 326 Wz/Wz-adapted isolate. This study enhances our understanding of the molecular mechanisms of P. nicotianae adaptation to partial resistance in tobacco by elucidating how the pathogen recruits pathogenicity-associated genes that impact host biological activities. View Full-Text
Keywords: RNAseq; Phytophthora nicotianae; adaptation; partial resistance; tobacco RNAseq; Phytophthora nicotianae; adaptation; partial resistance; tobacco
►▼ Show Figures 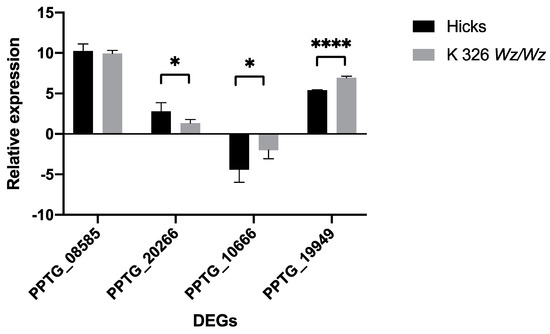