In order to integrate genomics in breeding and development of drought-tolerant groundnut genotypes, identification of genomic regions/genetic markers for drought surrogate traits is essential. We used 3249 diversity array technology sequencing (DArTSeq) markers for a genetic analysis of 125 ICRISAT groundnut mini core collection evaluated in 2015 and 2017 for genome-wide marker-trait association for some physiological traits and to determine the magnitude of linkage disequilibrium (LD). Marker-trait association (MTA) analysis, probability values, and percent variation modelled by the markers were calculated using the GAPIT package via the KDCompute interface. The LD analysis showed that about 36% of loci pairs were in significant LD (p < 0.05 and r2 > 0.2) and 3.14% of the pairs were in complete LD. The MTAs studies revealed 20 significant MTAs (p < 0.001) with 11 markers. Four MTAs were identified for leaf area index, 13 for canopy temperature, one for chlorophyll content and two for normalized difference vegetation index. The markers explained 20.8% to 6.6% of the phenotypic variation observed. Most of the MTAs identified on the A subgenome were also identified on the respective homeologous chromosome on the B subgenome. This could be due to a common ancestor of the A and B genome which explains the linkage detected between markers lying on different chromosomes. The markers identified in this study can serve as useful genomic resources to initiate marker-assisted selection and trait introgression of groundnut for drought tolerance after further validation.
Keywords: DArTseq; groundnut; linkage disequilibrium; marker-assisted selection; marker-trait association; physiological traits DArTseq; groundnut; linkage disequilibrium; marker-assisted selection; marker-trait association; physiological traits

The research was carried out in the research field of ICRISAT located at Minjibir (Latitude 12°19′ N and Longitude 8°63′ E) in 2015 and Bayero University, Kano (BUK, Latitude 11°58′ N and Longitude 8°25′ E) in 2017; both locations in Sudan Savanna of Nigeria. The long term means annual rainfall of both locations is about 800 mm, and; variations about this value is up to ±30%. The recorded weather information is presented in Figure S1a,b for Minjibir and BUK, respectively. The soil at Minjibir was typic Utipsamments and Typic Kanh aplustalf at BUK.
One hundred and twenty-five groundnut mini core accessions including five check varieties were evaluated using 25 × 5 randomized incomplete block design with three (3) replications. The description of the mini core collections along with the checks are presented in Table S1. The mini core collection was obtained from ICRISAT Kano and used in the current study based on seed availability. Sowing was done at Minjibir on 16 July 2015 and in BUK on 21 July 2017. Each plot in a replication consisted of a single row measuring 5 m in length with a row spacing of 0.75 m, plant distance of 0.1 m and 1 m alley between replications. Recommended specific practices for growing groundnut were strictly followed. A basal application of Nitrogen, Phosphorous, and Potassium was done to all plots at the rate of 20 N kg ha−1, 40 P2O5 kg ha−1 and 40 K2O kg ha−1 at planting. Hand weeding was done using hoes at 3rd, 8th, and 12th weeks after sowing (WAS) to prevent weed infestation and competition between plants and weeds.
Data was collected for canopy temperature (CT) using leaf thermometer (Meco IRT550 Infrared Thermometer, Sunshine instruments, Tamil Nadu, India), SPAD chlorophyll meter reading (SCMR) using SPAD 502 PLUS Chlorophyll meter (Spectrum Technologies, Inc., Aurora, IL, USA), normalized difference vegetative index (NDVI) using Hand Held optical sensor unit (Model 505 NTech Industries, Inc., Ukiah, CA, USA) and leaf area index (LAI) was measured by the use of Leaf Area Meter (ACCUPAR LP-80, Meter Group, Inc., Pullman, WA, USA). The data were collected at 60 WAS (peg formation stage) from five randomly selected plants in each plot.

Groundnut leaves were collected at 2 WAS into 96 deep well sample collection plates and sent to Integrated Genotyping Service and Support (IGSS) platform located at Biosciences Eastern and Central Africa (BecA-ILRI) Hub in Nairobi for Genotyping. The DNA extraction was done using the Nucleomag Plant Genomic DNA extraction kit. The genomic DNA extracted was in the range of 50–100 ng/ul. DNA quality and quantity were checked on 0.8% agarose. Libraries were constructed according to Kilian et al. [29]. DArTSeq complexity reduction method through digestion of genomic DNA and ligation of barcoded adapters was done followed by PCR amplification of adapter-ligated fragments. Libraries were sequenced using Single Read sequencing runs for 77 bases. Next-generation sequencing was carried out using Hiseq2500. The DArtSeq protocol was executed according to Kilian et al. [29].
The IGSS platform uses a GBS DArTseqTM technology, which provides rapid, high quality, and affordable genome profiling, even from the most complex polyploid genomes. DArTseq markers scoring was achieved using DArTsoft version 14, which is an in-house marker scoring pipeline based on algorithms. Two types of DArTseq markers were scored, SilicoDArT markers (scored as present or absent; 1, 0) and biallelic SNP markers which were both scored for the presence of the reference allele, the alternative allele, or both. In the genomic representation of the sample, both SilicoDArT markers and SNP markers were aligned to the reference genomes of Arachis duranensis (V14167, A-genome ancestor) and A. ipaensis (K30076, B-genome ancestor, https://www.peanutbase.org/) to identify chromosome.

The analysis of phenotypic data was done to obtain the best linear unbiased prediction (BLUP) values for each accession by fitting the following mixed linear model in the R “lme4” package.
yijk = u + gi + ej + r(e)jk + geij + errorijk.
where gi is the effect of the ith line, ej is the effect of the jth environment, r(e)jk is the effect of the kth replication nested in the jth environment, geij is the genotype by environment interaction and errorijk is the error associated with each observation. The analysis was run in R with the lme4 package [30].
Entry means broad-sense heritability was calculated as: where is the variance among lines, is the genotype by environment interaction variance, is the error variance, r is the number of replications, and e is the number of environments. The phenotypic correlation between traits was also determined.

Polymorphism information content (PIC) and principal component analysis (PCA) were carried out on the genotypic data using KDCompute. The unweighted pair-group method was used to cluster the accessions into a dendrogram. The parameter r2 was used to estimate LD between SNPs on each chromosome via the software package TASSEL 5.0 [31]. Marker-trait association analysis, probability values, and percent variation modelled by both SilicoDArT and biallelic SNP markers were calculated using the GAPIT package via the KDCompute interface (https://kdcompute.igss-africa.org/kdcompute/home). The GWAS threshold for the significant marker-trait association was p < 0.001 without multiple testing correction due to the small population size used in the present study. The first three principal components and the relationship matrix were included in the model to account for population structure. SNPs with minor allele frequency (MAF) of <5% and missing data >20% were excluded from the analyses. Missing values were imputed using the choice of the nearest neighbor algorithm using TASSEL 5.0 [31].

Linkage disequilibrium analysis conducted using 305,919 loci pairs within chromosomes showed that 36.3% of loci pairs had significant LD (Table S1). Furthermore, 9592 (3.14%) of the pairs were in complete LD (r2 = 1). There was a rapid decline in LD with distance and the correlation analysis revealed negative correlation (r = −0.0795) between the LD (R2) and the physical distance; as well as between the R2 and p-value (r = −0.5381), revealing the existence of linkage decay (Figure S6).

Due to the insignificant genotype by environment interaction for all traits except for SCMR, the GWAS was performed using phenotypic BLUPs estimated over all environments. The marker-trait association (MTA) analysis was done for both the dominant silico and biallelic SNP markers. However, significant associations were only detected from the dominant silico markers and none was detected from the biallelic SNP markers. Only the MTAs from the dominant silico markers that had p-values < 0.001 (Table 3) were considered as significant for all traits (details of significant MTAs with p-values between 0.05 and 0.001 are presented in Table S2). We found 20 MTAs with 11 markers (Table 3). Two markers (M1, M2) identified four possible loci for LAI. Marker M1 was associated with chromosomes A03 and B03 with allelic effects of −1.33 and −1.31, respectively while M2 was associated with chromosomes A06 and B07 with allelic effects of 1.96 and 1.97, respectively. The individual markers explained 6.8% to 7.3% of the total phenotypic variation observed (Table 3). Thirteen loci within seven markers (M3–M9) showed MTAs with CT and six of these markers (M3–M8) were located in chromosomal regions on both the A and B genomes. The CT markers explained between 9.6% to 16.6% of the variation observed and all had negative allelic effects. One marker (M10) on chromosome B05 was found to be associated with SCMR and explained 20.8% of the observed phenotypic variation with an allelic effect of −11.65. Another marker (M11) located on chromosomes A04 and B02 was associated with NDVI and had an allelic effect of 0.16 for both chromosomes. From all the 20 MTAs detected, the B genome had 11 and the A genome had nine. An equal number of associations were found on each genome except for CT and SCMR. The A genome had six MTAs and the B genome had seven MTAs for CT. The MTA with SCMR was exclusively detected on the B genome.

The following are available, Table S1: Table S1-Name, botanical grouping, origin and physiological performances of the mini core collections. Table S2: LD of markers for A and B genomes, Table S3: Significant marker-trait associations, Figure S1: Weather information for (A) Minjibir 2015 and (B) BUK 2017. Figure S2: Histogram of BLUP of leaf area index (LAI), canopy temperature (CT), chlorophyll content (SPAD) and NDVI from the groundnut mini core collection. Figure S3: Dendrogram from unweighted pair-group clustering of accession from the mini core collections. Figure S4: Distribution of markers on A genome of the groundnut accessions, Figure S5: Distribution of markers on the B genome of the groundnut accessions. Figure S6: Scatter plot showing the association between linkage disequilibrium (r2) and distance (a) and significance of the r2 value (b).

This research was funded by International Livestock Research Institute, Nairobi, Kenya, Biosciences eastern and central Africa (BecA-ILRI Hub), Nairobi, Kenya and Diversity Arrays Technology Pty Ltd. (DArT), Australia through the Integrated Genotyping Service and Support (IGSS) platform for Africa. International Crop Research for the Semi-Arid Tropics (ICRISAT), Kano Station, Nigeria, also provides funding for the field phenotyping and part of the genotyping work. There is no grant number attached to the funding received for this research.

We acknowledged the IGSS for some bioinformatics analysis and data interpretation. We also acknowledge the support of ICRISAT, Kano Station, Nigeria, for the field phenotyping. 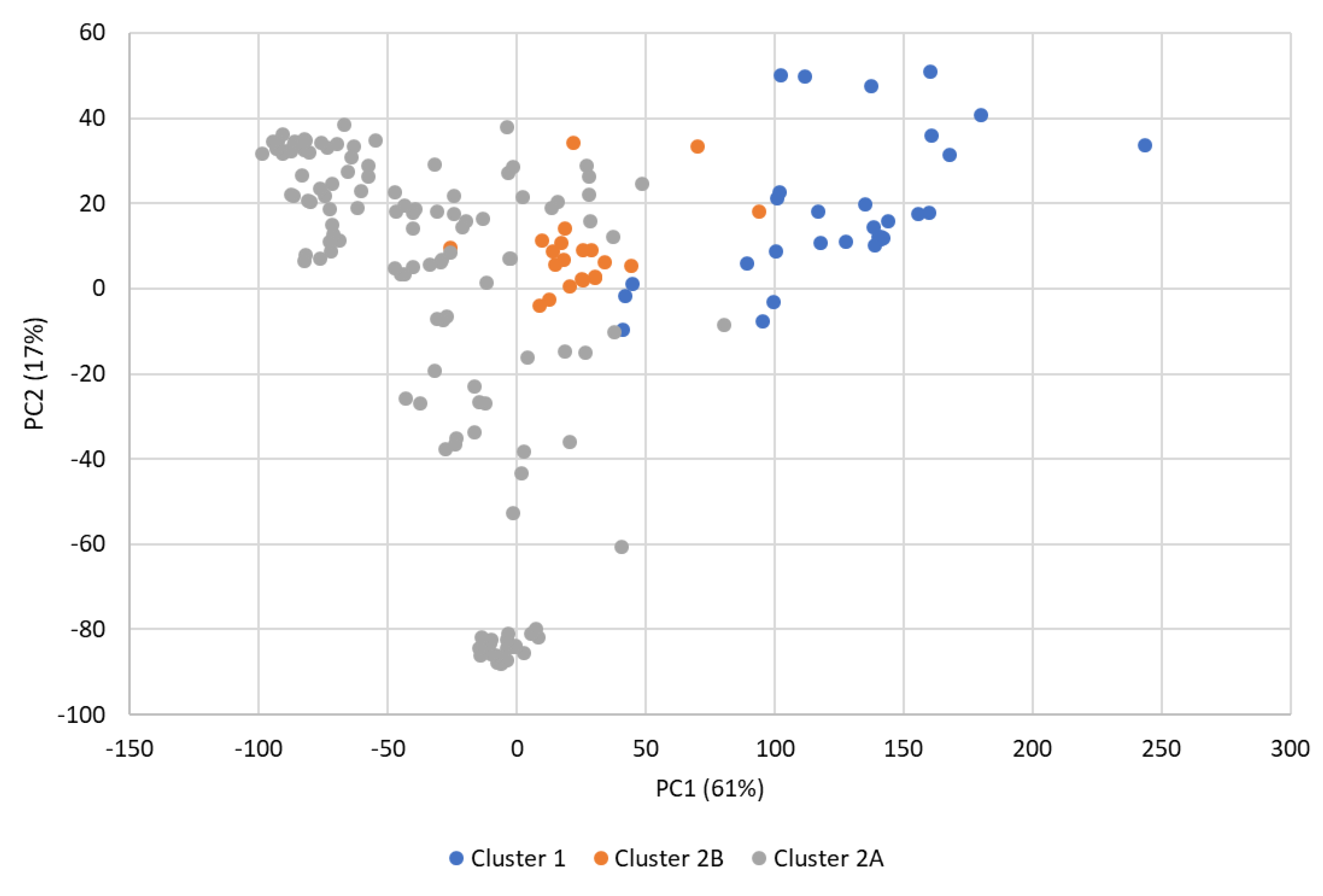