Two methods, the first physical and the other chemical, were investigated to modify the surface roughness of polydimethylsiloxane (PDMS) films. The physical method consisted of dispersing multi-walled carbon nanotubes (MWCNTs) and magnetic cobalt ferrites (CoFe2O4) prior to thermal cross-linking, and curing the composite system in the presence of a uniform magnetic field H. The chemical method was based on exposing the films to bromine vapours and then UV-irradiating. The characterizing techniques included scanning electron microscopy (SEM), energy-dispersive spectroscopy (EDS), Fourier transform infrared (FTIR) spectroscopy, optical microscopy, atomic force microscopy (AFM) and magnetic force microscopy (MFM). The surface roughness was quantitatively analyzed by AFM. In the physical method, the random dispersion of MWCNTs (1% w/w) and magnetic nanoparticles (2% w/w) generated a roughness increase of about 200% (with respect to PDMS films without any treatment), but that change was 400% for films cured in the presence of H perpendicular to the surface. SEM, AFM and MFM showed that the magnetic particles always remained attached to the carbon nanotubes, and the effect on the roughness was interpreted as being due to a rupture of dispersion randomness and a possible induction of structuring in the direction of H. In the chemical method, the increase in roughness was even greater (1000%). Wells were generated with surface areas that were close to 100 μm2 and depths of up to 500 nm. The observations of AFM images and FTIR spectra were in agreement with the hypothesis of etching by Br radicals generated by UV on the polymer chains. Both methods induced important changes in the surface roughness (the chemical method generated the greatest changes due to the formation of surface wells), which are of great importance in superficial technological processes. View Full-Text
Keywords: composites; roughness; magnetism; bromine composites; roughness; magnetism; bromine
►▼ Show Figures 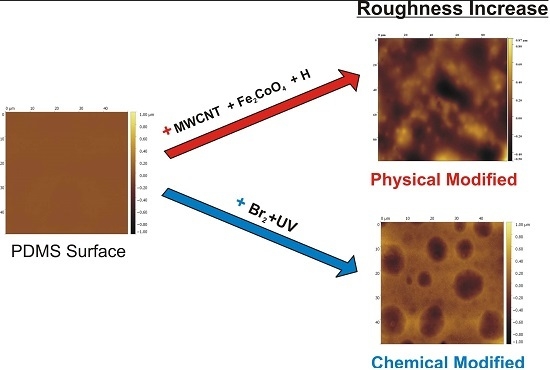