To date, near uniform fibers (as opposed to those exhibiting broader irregularities) have been preferred for pharmaceutical and biomaterial applications such as drug delivery [1], wound healing [2], and food preservation [3]. The electrospinning (ES) process, which is functional in an EHDA experimental setup, utilizes an electrostatic field for the production of continuous fibers, and has attracted significant attention due to numerous engineering advantages over other well-established fabrication methods (e.g., ambient environment operation). Furthermore, a greater preference for fibrous materials is emerging, which provides options to tailor physical and mechanical properties with greater ease. The porous nature of filamentous structures (e.g., films, membranes) yields additional benefit from inherently high aspect ratios (ARs) [4]. During ES/EHDA processes, surface morphology and diameter are modulated through process parameters (e.g., polymer concentration, applied voltage, solution flow rate, and collector distance) [5]. In recent times, fiber structure diversification through ES has been shown by the engineering of Janus, twisted, and core-shell structures [6,7,8]. In addition to these structures, beads-on (or beaded) fibers are also emerging as valuable architectures, even though the uniformity of such materials is significantly different to their perfectly electrospun counterparts [9]. Beaded fibers are commonly prepared (when using ES) by deploying solutions possessing low polymer concentrations [10]. While subsequent structures appear irregular, the aggregation of impregnated chemicals (such as drugs) within ‘beads’ have shown to modulate their release behavior from the resulting non-woven materials [11,12]. In addition, when compared to equivalent non-beaded structures, beaded fibers exhibit a greater contact area. This is an ideal property for biological scaffolds, which are known to improve cell growth [13,14]. However, with the main emphasis to date on smooth regular fibers, the impact of the process parameters on beaded fiber optimization remains limited. The synthesis of such irregular morphologies has often been shown as part of the process medium validation during ‘pristine’ ES. Another family of microstructures currently being explored for numerous advances in biomedical engineering is microbubbles [15]. In general, such structures are described as a gaseous material encapsulated by a thin film, which in many cases is a polymeric material [16,17].
Herein, we demonstrate a novel fabrication route for the controlled engineering of beaded fibers using microbubbles. Polyvinyl alcohol (PVA), a biocompatible synthetic polymer, was used to prepare a series of microbubble suspensions (using deionized water as the vehicle) with varying polymer loading volumes [18]. Suspensions were subsequently subjected to the EHDA process leading to continuous beaded fiber production. Fiber property control (diameter, inter-bead distance, and AR) and the resulting beaded fibrous film surface hydrophilicity were investigated via conventional EHDA processing parameters. Finally, a variety of drug (Tetracycline (TE)) hosting beaded fiber matrices was prepared and the drug release was controlled through tailored fiber properties.

PVA solutions (6, 8, and 10 wt %) were prepared by dissolving known quantities of PVA in DI water. The mixtures were mechanically stirred (VELP ARE heating magnetic stirrer, VELP Scientifica, Usmate, Italy) in a flask for 60 min to fabricate emulsion PVA microbubbles. During the process, the parameters impacting PVA bubble forming were determined by varying the stirring rate and heating temperature. The stirring rates were set at 300, 700, and 1100 rpm, while the heating temperature was varied at 40, 60, and 80 °C. PVA solutions (without bubbles) were prepared (at 60 °C, 100 rpm for 60 min) to produce fibers through conventional ES.
The ES apparatus and techniques for uniform fiber preparation have been described in previous publications [19,20,21]. As shown in Figure 1, the ES apparatus consists of a high power voltage supply (Glassman high voltage Inc. High Bridge, series FC, NJ, USA), a high-precision programmable syringe pump (KDS100, KD Scientific, Holliston, MA, USA), and a stainless steel needle. Grounded aluminum foil was used as the fiber collector substrate, and was set 13 cm directly below the spinning needle. Individual PVA microbubble suspensions were loaded into 5-mL plastic syringes, and perfused from the syringe into the processing needle (the inner and outer diameters were 0.8 mm and 1 mm, respectively) via silicon tubing. The flow rate was maintained at 0.5 mL/h. During the ES process, an electric field, ranging between 14–18 kV, was applied between the needle and the ground electrode (round-shape electrode with inner and outer diameters of 2.7 and 3.5 cm) to produce beaded PVA nanofibers. All experiments were performed at ambient temperature (25 °C).

Optical (OM, BMC503, Phenix, Shangrao, China) and field emission scanning electron (SEM, ProX-Phenom, PhenomWorld, Eindhoven, The Netherlands) microscopy were used to assess the size distribution and surface morphology of PVA microbubbles and electrospun fibers. Prior to SEM analysis, samples were coated with a layer of gold under a vacuum environment for 60 s, and then observed at an accelerating voltage of 10 kV. Optical and electron micrographs were analyzed using ImageJ software (NIH, Bethesda, MD, USA) to obtain the bubble, bead, fiber, and AR of various structures. A sample size of 100 was selected for each condition. The AR of the beads was calculated using Equation (1):
Water contact angle (CA) values of different electrospun fibers were measured using an optical contact angle meter (SL200KB, KINO Industry Co. Ltd., Norcross, GA, USA) to confirm the surface hydrophilicity of fabricated membranes. Fibrous membranes were prepared by collecting the electrospun PVA fibers on precisely located object slides for 15 min under constant ES conditions. One hour after the collection, the mean CA was determined by the average of left and right CAs of a single 1-μL water droplet pipetted on each membrane sample. CAs were recorded when the pipetted droplet was stable (2 s post droplet falling). The resulting value of each measurement represents the average value of 10 measurements. All statistical diagrams were plotted using Origin software (OriginLab, Northampton, MA, USA).
Fourier Transform Infrared (FTIR) spectroscopy was set to determine the chemical interactions and materials stability of electrospun PVA fibers and TE-HCL. For each measurement, 2 mg of sample (pure electrospun PVA fibers, TE-HCL, or the composite fibers) was dispersed in 200 mg KBr medium by grinding in a mortar. The mixture was then compressed into a transparent pellet at a pressure of 20 MPa. The fabricated pellet was scanned with FTIR (IR-Affinity1, Shimadzu, Kyoto, Japan), ranging from 3500 to 500 cm−1. Spectra were obtained using 20 scans per sample.

TE-HCL release from PVA matrices was studied to evaluate the effect of beads-on fiber morphology on the drug release profile. PVA/TE-HCL composite electrospun fibers with various morphologies (beads-on fibers, stretched beads-on fibers, and fibers without beads) were prepared using PVA solutions with different concentrations (6, 8, and 10 wt %), and the TE-HCL content in each solution was constantly set as 4 wt %. Then, 20 mg per electrospun sample was placed into 10 mL of PBS. At designated time intervals, 2 mL of supernatant was removed from the medium for measurement, and then the medium was compensated with fresh PBS to 10 mL. The concentration of TE-HCL in PBS was determined by measuring absorbance at 363 nm using a UV-2600 spectrophotometer (Shimadzu, Kyoto, Japan) [22]. The cumulative release of TE-HCL was determined using Equation (2) [23]: where Ct is the concentration of TE-HCL in PBS medium at time t, and Ct−1 is the value at the designed time point before t. All the experiments were performed in triplicate.

In summary, beaded fibers with mean diameters ranging from 223 to 737 nm and ARs ranging from 10% to 56% were fabricated using PVA microbubble suspensions. Bead formation and size distribution were regulated via PVA solution concentration and applied voltage. Greater PVA concentration deployment yielded fibrous membranes with superior hydrophobic properties. In addition, FTIR analysis indicates the successful and stable encapsulation of TE-HCL within the PVA fiber matrix. Drug release from beaded structures and membrane hydrophilicity are influenced by their respective ARs. These findings indicate a method to tailor fibrous beaded structures for biomedical and drug delivery applications.

This work was financially supported by the Key Technologies R&D Program of Zhejiang Province (2015C02035, 2014C02021) and the Fundamental Research Funds for the Central Universities (2017QNA5017). 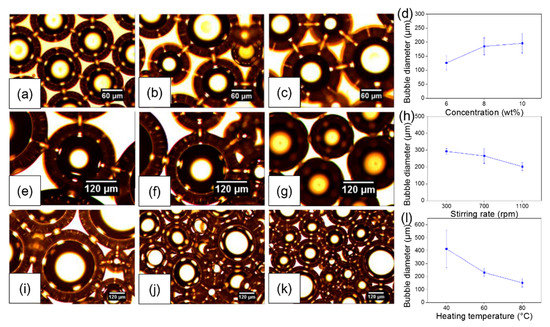 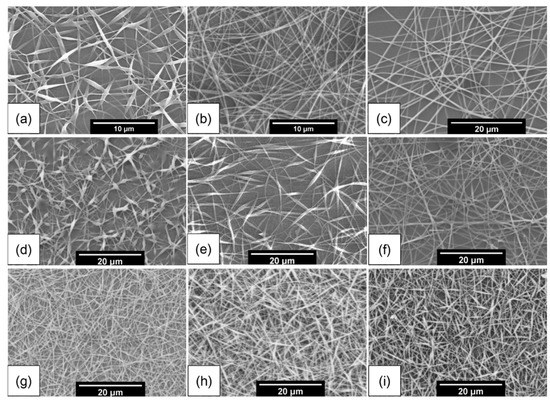 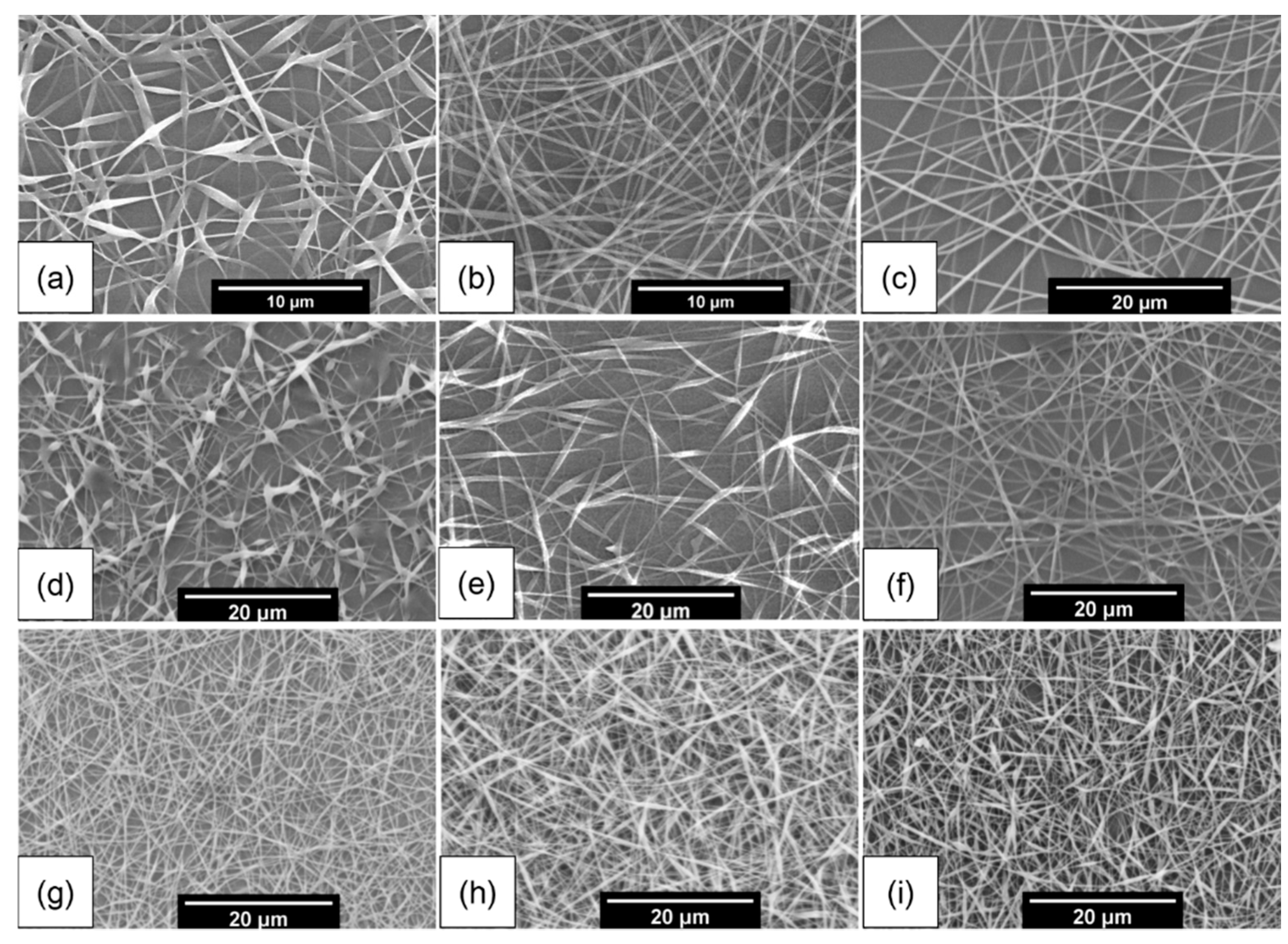 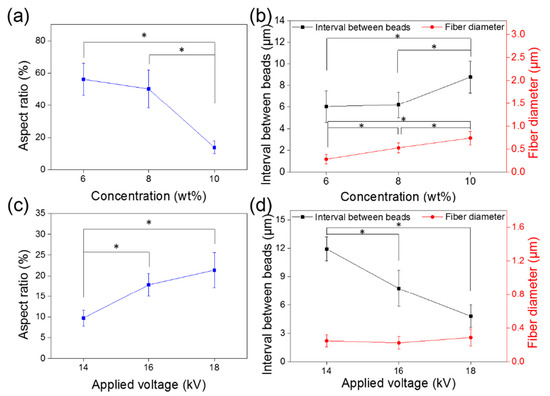 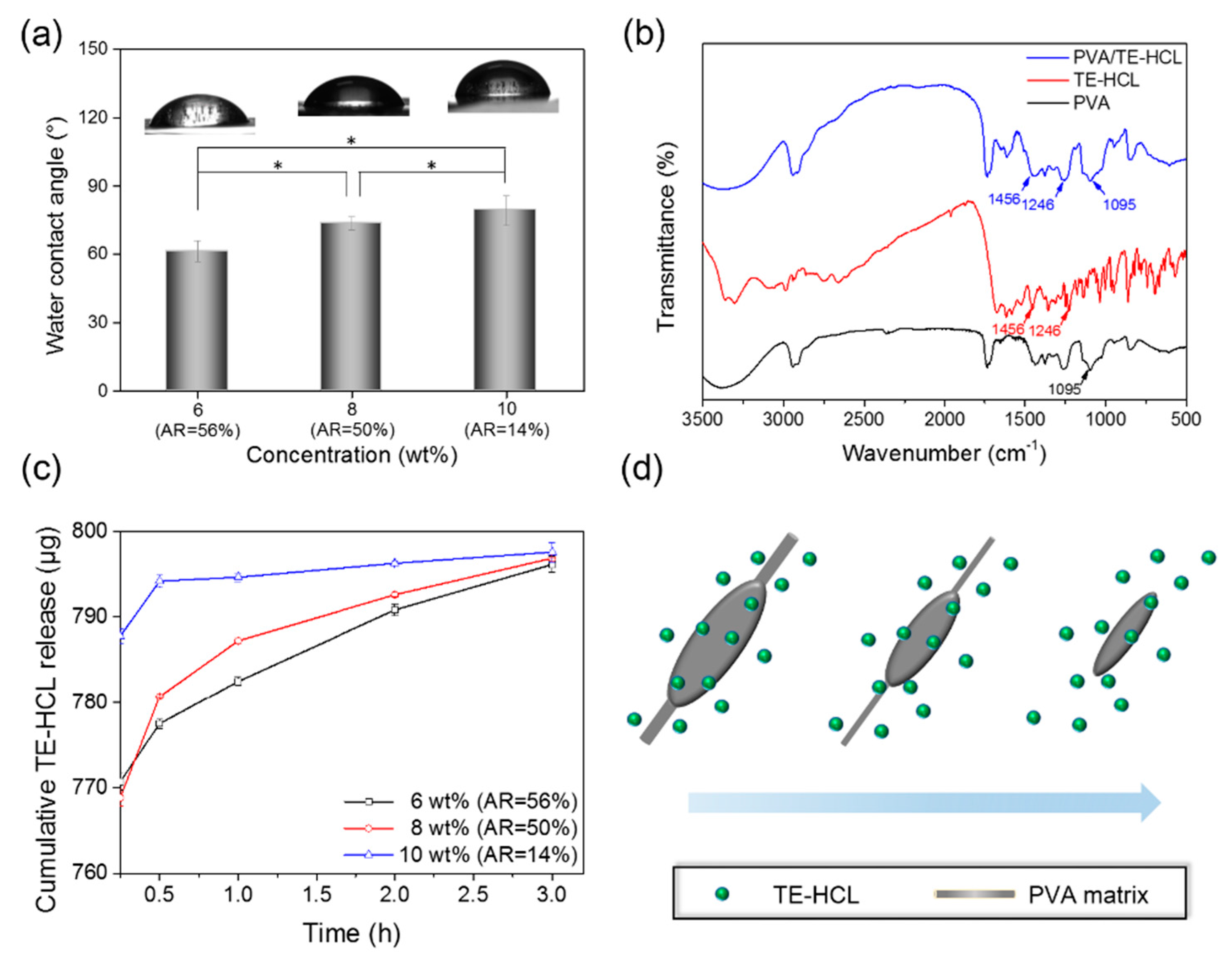