Entropic Interactions between Two Knots on a Semiflexible Polymer

Organic-inorganic composites based on the functionalization of mesoporous silica materials such as MCM-n, HMS-n, and SBA-n have attracted a great deal of research interest in the past decades [1,2,3,4,5,6]. Among them, SBA-15 was one of the most widely used ordered mesoporous materials for such functionalization due to its many attractive properties, such as high hydrothermal stability, desired morphology, adjustable pore sizes (2–30 nm), and thick walls. At the same time, the existence of many reactive groups on the surface, such as the –OH group, made it easy for functionalization through silanol chemistry [7,8]. Furthermore, a polymer with versatile organic groups was considered as the most efficient way to introduce different functional groups on the surface of such silica materials. Through this method, the surface properties of these silica materials could be easily tailored by changing the type and amount of polymers, which evidently enriched the functional modification of these materials.
To covalently attach polymer chains on the surface of materials, the technique of so-called “grafting from” based on surface-initiated polymerizations is considered one of the powerful tools [9,10]. Significant advances in this area have been achieved by the development of living radical polymerization techniques, especially nitroxide-mediated polymerization (NMP) [11,12], reversible addition-fragmentation chain transfer polymerization (RAFT) [13], and atom transfer radical polymerization (ATRP) [14]. Among them, surface-initiated atom transfer radical polymerization (SI-ATRP) has received much attention during the past two decades [2,15,16,17,18]. So far, polymers with controlled structures and functional side groups can be grafted on various surfaces by SI-ATRP, as done in antifouling coatings [19], drug delivery [20], stimuli-responsive materials [21], and nanoporous membranes [22].
Originally, ATRP [23,24,25,26,27] was carried out with relatively high concentrations of transition metals, typically a Cu-based catalyst, in order to compensate for unavoidable radical termination reactions. Recently, several systems were developed that enabled ATRP to proceed at a catalyst loading of only 10–100 ppm of Cu [28,29]. This occurs in the presence of various reducing agents that continuously regenerate Cu+ activators from Cu2+ deactivators and it compensates for radical termination. Although catalyst loadings can be decreased to parts per million (ppm), for a variety of applications, such as microelectronics, biomaterials, etc., a key limiting factor in using ATRP is metal contamination. Very recently, Hawker et al. [30] reported a photo-induced metal-free ATRP of methyl methacrylate using 10-phenylphenothiazine (PTH) as an organic photocatalyst. In this photo-induced, metal-free ATRP mechanism, a three-component photoredox cycle is conducted. The photoexcited PTH* activates an alkyl halide and generates radicals, while the PTH+•Br− specie deactivates the radical and regenerates the ground-state PTH. Recently, the metal-free ATRP system has been developed very fast. Various catalyst systems with improved control abilities were developed in these years [31,32,33]. With these developments, metal-free SI-ATRP also has been verified in recent years. However, these reports were focused on the modification of the surface properties of flat surfaces and particles by SI-ATRP [34,35]. Few examples of metal-free SI-ATRP on the surface of mesoporous material were reported.
Herein, for the demonstration of photo-induced metal-free SI-ATRP on mesoporous silica materials, we report a procedure to synthesize organic-inorganic hybrid materials based on photo-induced metal-free SI-ATRP of methacrylate monomers on the surface of SBA-15. Such a process was realized by chemically binding the ATRP initiator on the mesostructure walls beforehand, following by photo-induced metal-free SI-ATRP to grow polymers directly from and over the SBA-15 internal surface. Initially, methyl methacrylate was selected as the model monomer for such modification. Then, functional monomers, e.g., dimethylaminoethyl methacrylate and N-isopropylacrylamide, were used for a similar modification. This procedure provides a low cost, ready availability, and easy modification method to synthesize polymeric composites without the contamination of metal.

SBA-15 was synthesized according to the procedure reported by Zhao et al. [7] using Pluronic 123 triblock copolymer as a template. Briefly, 20 g of Pluronic 123 was dissolved under stirring in 600 mL of 2 M HCl and 150 mL of deionized water at 40 °C. Then 42.5 g of tetraethlorthosilicate (TEOS) was [8] added. The resultant solution was stirred for 24 h at 40 °C before transferring into a Teflon bottle sealed in an autoclave, which was then heated to 130 °C for 24 h in an oven. The solid product was recovered by filtration and dried at 40 °C for 5 h in the vacuum oven. The template was removed from the as-made mesoporous material by calcination at 550 °C for 5 h (heating rate is 1.5 °C/min).

Amount of 8.0 g calcined SBA-15 was degassed under vacuum at 40 °C overnight before added into a three-necked flask containing 350 mL of dry toluene and 8 mL of (3-aminopropyl)triethoxysilane (APTES). The mixture was stirred for 5 h under reflux at a nitrogen atmosphere. Under this condition, the hydroxyl groups of the SBA-15 surface react with the ethoxy groups of the APTES molecules, resulting an amino-functionalized SBA-APTES. Then, the solid was recovered by filtration and intensively washed with toluene before dried under vacuum at 40 °C overnight.

Compound 2-bromo-2-methylpopionyl bromide (BMPB) was used to react with the previously attached aminopropyl groups leading the ATRP initiator bonded on SBA-15 pores surface. In this case, 8.6 g of the functionalized SBA-15 material was added to a three-necked flask containing 300 mL of dry toluene and 9 mL triethylamine. Then, 8 mL of BMPB was added in a constant pressure funnel. The system was stirred for 3 h under reflux and a nitrogen atmosphere. Finally, the solid was recovered by filtration, washed with deionized water until the filtrate was clear, and outgassed under vacuum at 40 °C overnight.

A typical experimental procedure for the preparation of SBA-PMMA by metal-free photo-induced SI-ATRP follows: 1mL of methyl methacrylate (MMA, 0.9440 g, 9.43 mmol, 100 equiv.), 18.4 mg of ethyl 2-bromoisobutyrate (EBiB, 0.09 mmol, 1 equiv.), 5.0 mg of 10-phenylphenothiazine (PTH, 0.02 mmol, 0.2 equiv.), 1.0 g of SBA-Br, and 1 mL of DMF were added to an ampoule. The ampoule was tightly sealed and oxygen was removed by three freeze-pump-thaw cycles. The reaction was irradiated under a 3.0 mW/cm2 xenon lamp with the 380 nm optical filter. After a predetermined time, the ampoule was removed from the irradiation and the reaction mixture was then diluted with THF and centrifuged (10,000 rpm, 10 min) to collect the polymer-grafted SBA-15. The centrifugation and redispersion was repeated three times. The number-average molecular weight Mn and dispersity (Mw/Mn) were obtained by GPC using linear PMMA standards in THF as the eluent. The graft density was calculated gravimetrically. The obtained samples were denoted as SBA-PMMA.

Fourier transform infrared spectroscopy (FT-IR) spectra were recorded on a TENSOR 27, BRUKER Optik GmbH, Ettlingen, Germany. TGA was carried out on PerkinElmer PYRIS 1 TGA thermogravimetric analyser (PerkinElmer, Hong Kong, China) at a heating rate of 10 °C·min−1 from room temperature to 700 °C in a nitrogen atmosphere. Surface compositions were determined by X-ray photoelectron spectroscopy (XPS) on a KRA70S AXIS Ultra DLD spectrometer (Kratos Analytical Limited, Manchester, UK) at a pressure of ≈2 × 10−8 Torr using Al Kr radiation as the exciting source; the instrument was operated at 15 kV and 10 mA. The surface area was determined via the nitrogen adsorption/desorption technique at 77 K using the ASAP 2020 surface area and porosimetry analyzer. The standard BET and DFT models were applied to determine the surface area and pore volume. The number-average molecular weight (Mn,GPC) and molecular weight distribution (Ð) of the polymers were determined by a TOSOH HLC-8320 equipped with a refractive-index detector, using a TSKgel guard column SuperMP-N (4.6 mm × 20 mm) and two TSKgel Supermultipore HZ-N (4.6 mm × 150 mm) with a measurable molecular weight ranging from 5 × 102 to 5 × 105 g/mol. DMF (+LiBr 0.1% weight) was used as the eluent at a flow rate of 0.6 mL/min and 40 °C. GPC samples were injected using a TOSOH plus auto sampler and calibrated with PS standards purchased from TOSOH (Tokyo, Japan). The concentration of toluene in the treated solution was quantitatively analyzed using a GC2010 (Shimadzu, Kyoto, Japan) plus gas chromatography with a low-polarity capillary column and a flame ionization detector (FID). The oven temperature was initially set at 80 °C, and held this temperature for 5 min, then ramped at 5 °C·min−1 to 140 °C, and held at this temperature for 2 min. The temperatures of injector and detector were at 280 and 300 °C respectively.

The metal-free photo-induced SI-ATRP of methacrylate on the surface of mesoporous SBA-15 was demonstrated. The polymerization conditions were optimized, and using this metal-free photo-induced SI-ATRP, a SBA-15-based polymeric composite with an adjustable graft density and grafted polymer chain length was obtained. It showed that the porous structure could be modified over a large range after the introduction of the polymer chain. Enhanced adsorption ability for toluene was obtained after modifying SBA-15 with PMMA. The use of photo-initiation is ideal as it avoids the introduction of metals as catalysts which can remain behind as impurities. This procedure provides a low-cost, readily available, and easy modification method to synthesize polymeric composites without the contamination of metals with enhanced adsorption ability.

This work was supported by the National Natural Science Foundation of China (No. 21306121), the Priority Academic Program Development (PAPD) of Jiangsu Higher Education Institutions and the Program of Innovative Research Team of Soochow University. 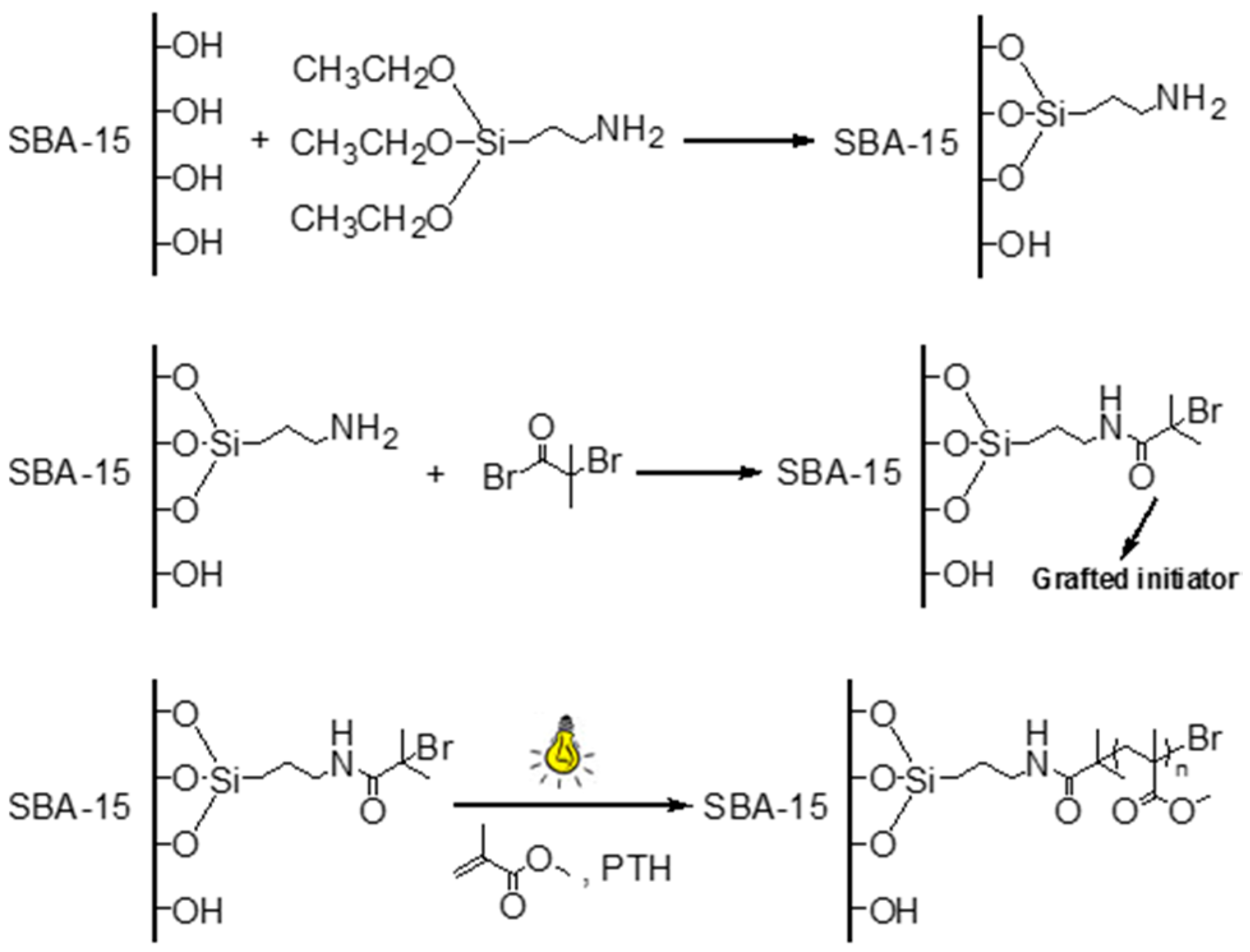 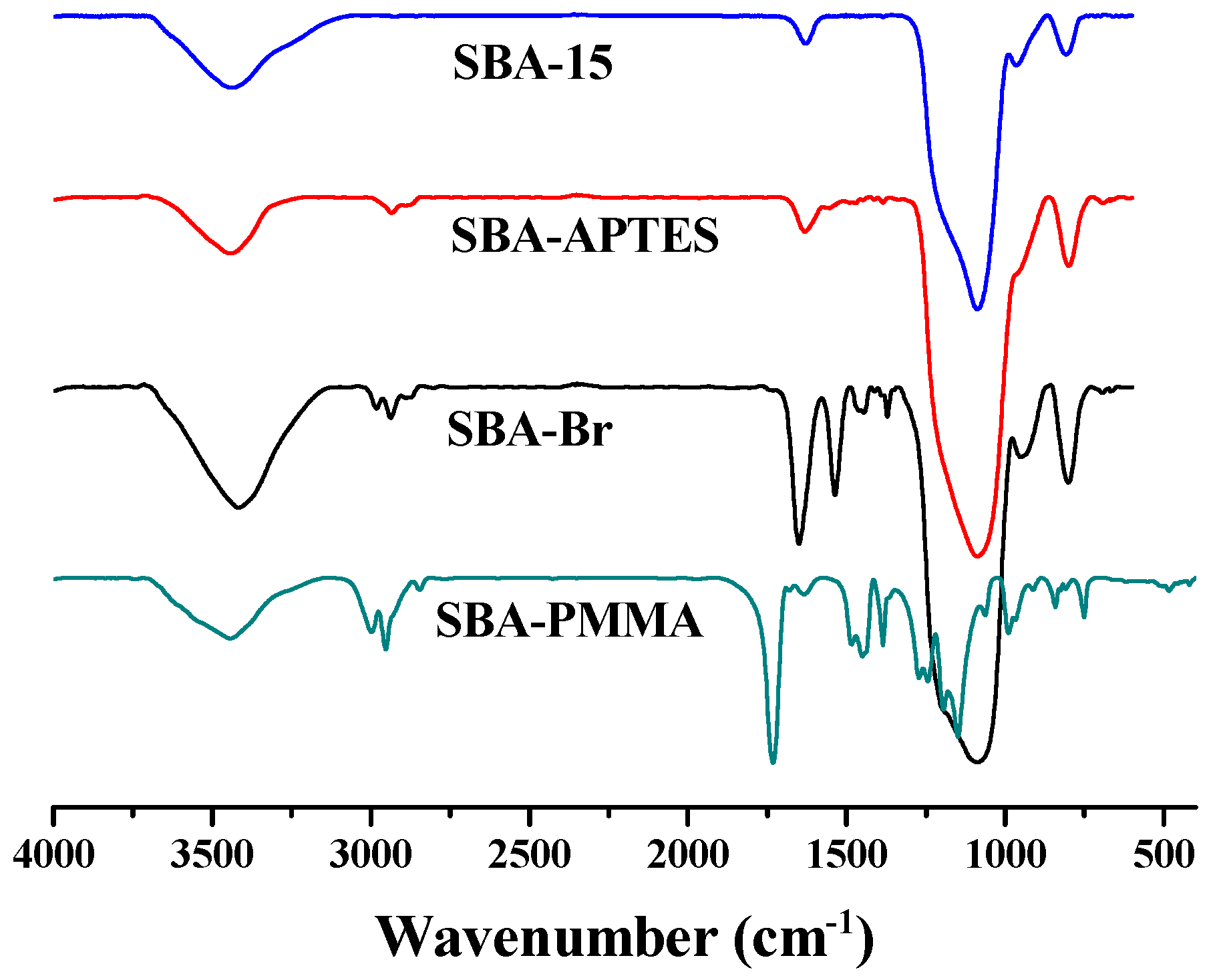 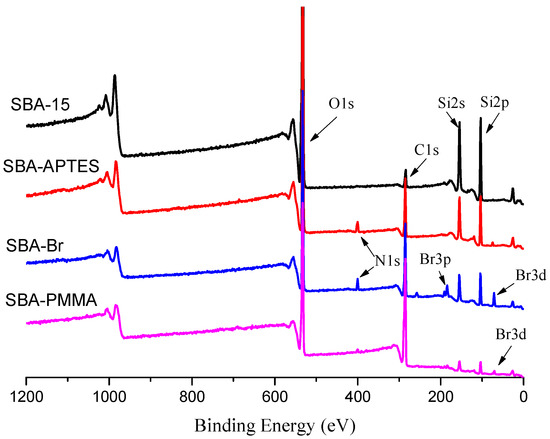 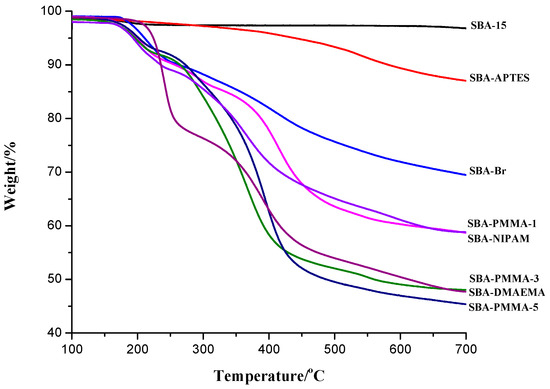 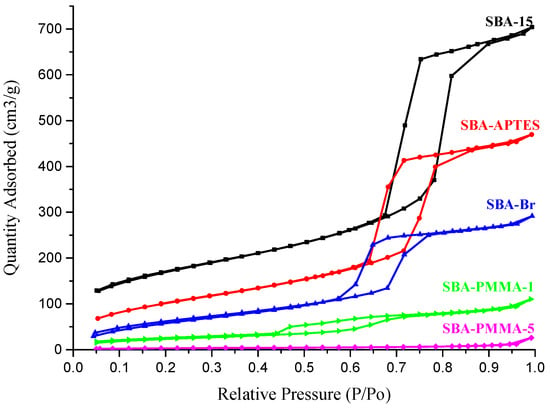 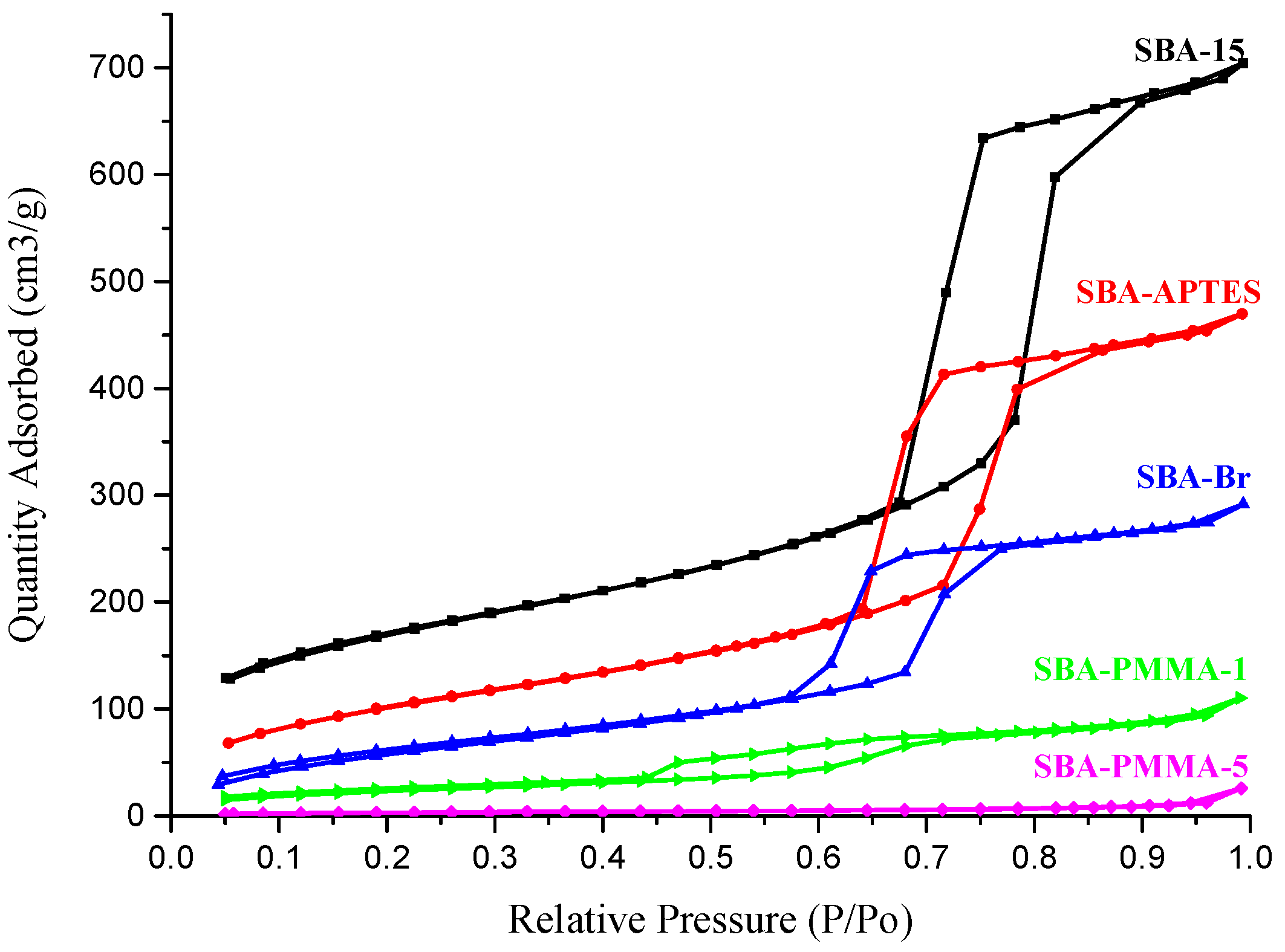 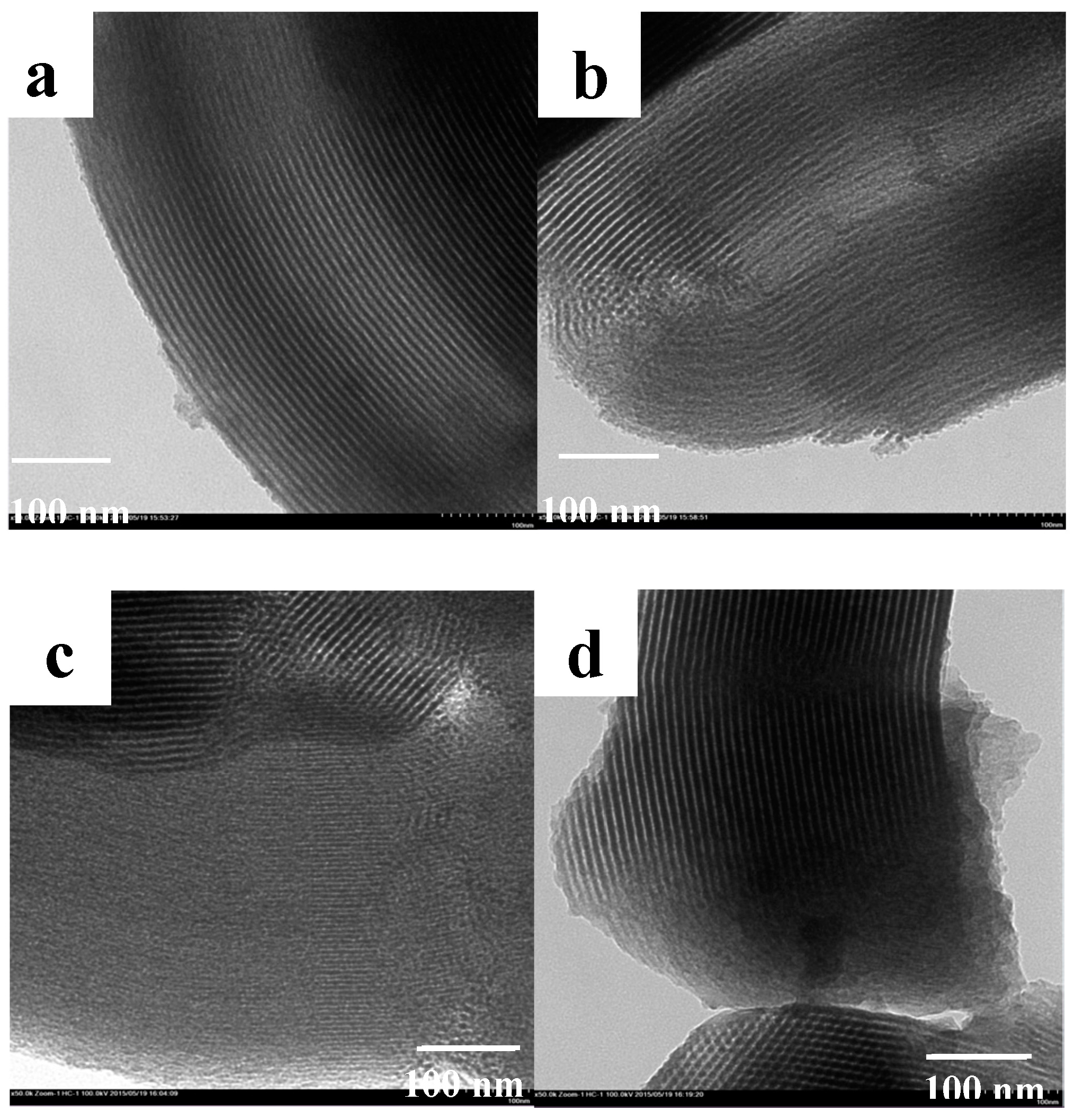 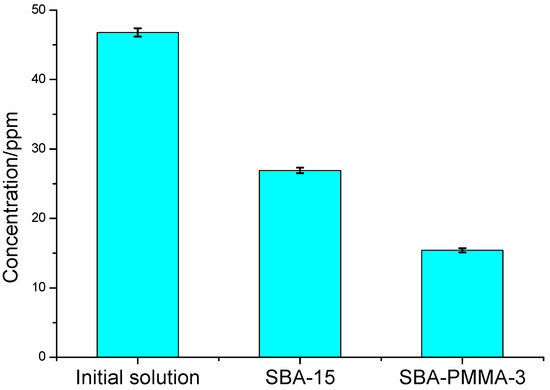