During the past several years, we have been utilizing cyclodextrins (CDs) to nanostructure polymers into bulk samples whose chain organizations, properties, and behaviors are quite distinct from neat bulk samples obtained from their solutions and melts. We first form non-covalently bonded inclusion complexes (ICs) between CD hosts and guest polymers, where the guest chains are highly extended and separately occupy the narrow channels (~0.5–1.0 nm in diameter) formed by the columnar arrangement of CDs in the IC crystals. Careful removal of the host crystalline CD lattice from the polymer-CD-IC crystals leads to coalescence of the guest polymer chains into bulk samples, which we have repeatedly observed to behave distinctly from those produced from their solutions or melts. While amorphous polymers coalesced from their CD-ICs evidence significantly higher glass-transition temperatures, Tgs, polymers that crystallize generally show higher melting and crystallization temperatures (Tms, Tcs), and some-times different crystalline polymorphs, when they are coalesced from their CD-ICs. Formation of CD-ICs containing two or more guest homopolymers or with block copolymers can result in coalesced samples which exhibit intimate mixing between their common homopolymer chains or between the blocks of the copolymer. On a more practically relevant level, the distinct organizations and behaviors observed for polymer samples coalesced from their CD-ICs are found to be stable to extended annealing at temperatures above their Tgs and Tms. We believe this is a consequence of the structural organization of the crystalline polymer-CD-ICs, where the guest polymer chains included in host-IC crystals are separated and confined to occupy the narrow channels formed by the host CDs during IC crystallization. Substantial degrees of the extended and un-entangled natures of the IC-included chains are apparently retained upon coalescence, and are resistant to high temperature annealing. Following the careful removal of the host CD lattice from each randomly oriented IC crystal, the guest polymer chains now occupying a much-reduced volume may be somewhat “nematically” oriented, resulting in a collection of randomly oriented “nematic” regions of largely extended and un-entangled coalesced guest chains. The suggested randomly oriented nematic domain organization of guest polymers might explain why even at high temperatures their transformation to randomly-coiling, interpenetrated, and entangled melts might be difficult. In addition, the behaviors and uses of polymers coalesced from their CD-ICs are briefly described and summarized here, and we attempted to draw conclusions from and relationships between their behaviors and the unique chain organizations and conformations achieved upon coalescence. View Full-Text
Keywords: polymers; cyclodextrins; inclusion compounds; coalescence polymers; cyclodextrins; inclusion compounds; coalescence
►▼ Show Figures 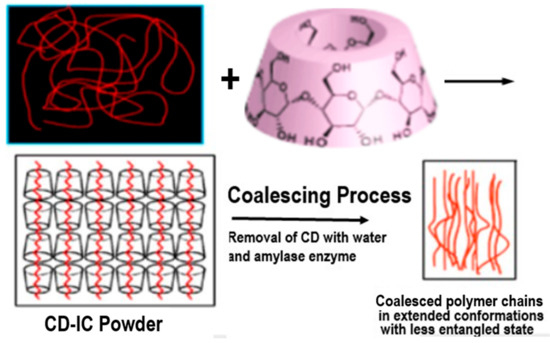