Synthesis of Terpolymers with Homogeneous Composition by Free Radical Copolymerization of Maleic Anhydride, Perfluorooctyl and Butyl or Dodecyl Methacrylates: Application of the Continuous Flow Monomer Addition Technique
Next Article in Special Issue

Bimetallic Catalytic Systems Based on Sb, Ge and Ti for the Synthesis of Poly(ethylene terephthalate-co-isosorbide terephthalate)

In this work, we report the synthesis of poly(ethylene furanoate) (PEF), catalyzed by three different catalysts, namely, titanium (IV) isopropoxide (TIS), tetrabutyltitanate (TBT), and dibutyltin (IV) oxide (DBTO), via the two-stage melt polycondensation method. Solid-state polymerization (SSP) was conducted at different reaction times (1, 2, 3.5, and 5 h) and temperatures 190, 200, and 205 °C, under vacuum. The resultant polymers were analyzed according to their intrinsic viscosity (IV), end groups (–COOH), and thermal properties, via differential scanning calorimetry. DSC results showed that the post polymerization process was favorable to enhance the melting point of the prepared PEF samples. As was expected, the intrinsic viscosity and the average molecular weight of PEF increased with the SSP time and temperature, whereas the number of carboxyl end-groups was decreased. A simple kinetic model was also developed and used to predict the time evolution of polymers IV, as well as the carboxyl and hydroxyl content of PEF during the SSP. From both the experimental measurements and the theoretical simulation results it was proved that the presence of the TIS catalyst resulted in higher transesterification kinetic rate constants and higher reaction rates. The activation energies were not much affected by the presence of different catalysts. Finally, using DBTO as a catalyst, the polyesters produced have higher crystallinity, and as a consequence, higher number of inactive carboxyl and hydroxyl groups. View Full-Text
Keywords: poly(ethylene furanoate); catalysts; solid state polymerization; thermal properties poly(ethylene furanoate); catalysts; solid state polymerization; thermal properties
►▼ Show Figures 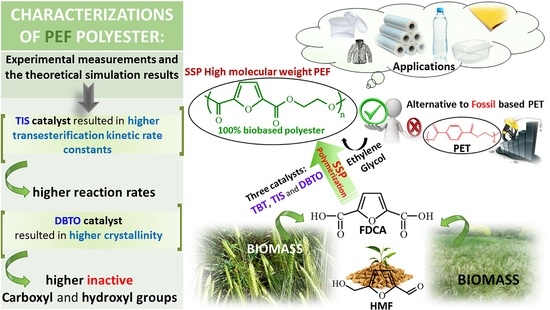