Bio-Based Polymers with Potential for Biodegradability

3D Culture of Chondrocytes in Gelatin Hydrogels with Different Stiffness

Gelatin hydrogels can mimic the microenvironments of natural tissues and encapsulate cells homogeneously, which makes them attractive for cartilage tissue engineering. Both the mechanical and biochemical properties of hydrogels can affect the phenotype of chondrocytes. However, the influence of each property on chondrocyte phenotype is unclear due to the difficulty in separating the roles of these properties. In this study, we aimed to study the influence of hydrogel stiffness on chondrocyte phenotype while excluding the role of biochemical factors, such as adhesion site density in the hydrogels. By altering the degree of methacryloyl functionalization, gelatin hydrogels with different stiffnesses of 3.8, 17.1, and 29.9 kPa Young’s modulus were prepared from the same concentration of gelatin methacryloyl (GelMA) macromers. Bovine articular chondrocytes were encapsulated in the hydrogels and cultured for 14 days. The influence of hydrogel stiffness on the cell behaviors including cell viability, cell morphology, and maintenance of chondrogenic phenotype was evaluated. GelMA hydrogels with high stiffness (29.9 kPa) showed the best results on maintaining chondrogenic phenotype. These results will be useful for the design and preparation of scaffolds for cartilage tissue engineering. View Full-Text
Keywords: gelatin; hydrogel; stiffness; chondrogenic phenotype; tissue engineering gelatin; hydrogel; stiffness; chondrogenic phenotype; tissue engineering
►▼ Show Figures 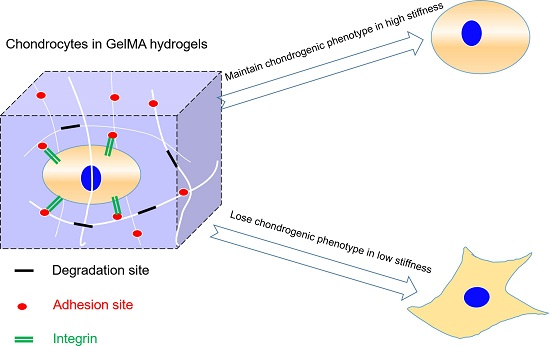