Development of novel semiconducting conjugated polymers and investigation ofstructure–property relationships always play a critical role in the organic electronic devices. Through rational molecular design, they will be tuned specifically to achieve desired optical and electronic properties for application in electronics and optoelectronics, such as field effect transistors (FETs) [1,2], photo-detectors [3], light-emitting diodes (LEDs) [4], and photovoltaics (PVs) [5,6]. Over the past several decades, many well-designed conjugated polymers have been used as photoactive materials in organic photovoltaic (OPV) devices owing to their excellent optoelectronic properties [7,8]. As a promising conjugated polymer in the OPV field, it should possess broad absorption in the solar spectrum, high charge carrier mobility for charge transport, suitable energy levels, etc. [7,9]. Therefore, how the designs of the molecular structures can be used to control their properties is of particular importance in the development of conjugated polymers.
Among these high performance conjugated polymers, benzo[1,2-b:4,5-b′]dithiophene (BDT) has been considered as one of the most effective building-blocks for p-type conjugated polymers because it possesses a planar structure and BDT-based copolymers have high hole mobility and suitable electronic energy levels [10,11,12]. The bulk heterojunction (BHJ) polymer solar cell devices (PSCs) based on BDT-based copolymers have achieved high power conversion efficiency (PCE) values over 10% [8,13,14,15]. In addition, in order to enhance the short-circuit current density in PSCs, molecular designs should be conducive to enhancing the absorption ability of the conjugated polymer. As shown in Figure 1, two-dimensional (2-D) conjugation by vinylene linkage, such as thienylene-vinylene [16], bi(thienylene-vinylene) [17], phenothiazine-vinylene [18], triphenylamine-vinylene [19], and terthiophene-vinylene [20], has proven to be a successful strategy to enhance light-harvesting ability, charge mobility and self-assembly, and adjust molecular energy levels to meet the requirements of PSCs [17,20,21]. Moreover, Tan and co-workers reported that a series of 2-D conjugated polymers incorporating different thienylene-vinylene derivatives with BDT building blocks, such as PTG1 [22] and PBDT-TID [23], not only attracted much interest but also demonstrated an effective strategy to extend the absorption range and down-shift the HOMO energy level. On the other hand, Li and co-workers reported that introduction of strong electro-withdrawing groups, such as pyrrolo[3,4-c]pyrrole-1,4-dione (DPP), in the 2-D conjugated polymers broadens the spectral absorption via the random polymerization [24]. Taking a comprehensive view of these strategies, it it is of great interest to discover novel 2-D conjugated polymers to improve their optoelectronic and photovolatic properties, such as enhancing absorption ability and further improving photon-to-electron conversion efficiency, through incorporating different 2-D conjugation blocks with electron-withdrawing and/or electron-donating groups.
In our previous studies, terthiophene–vinylene (TTV)-based conjugated polymers possess a broader absorption region and deeper HOMO levels than rr-P3HT [20,25,26]. Herein, a novel 2-D polymer PTTVBDT, as shown in Figure 2, has been designed and synthesized by cooperating TTV and BDT units via Stille polymerization. Furthermore, two electron-withdrawing groups, TPD and DPP units, were employed as the third copolymerization unit to build the terpolymers, PTTVBDT-TPD and PTTVBDT-DPP, respectively. Thieno[3,4-c]pyrrole-4,6-dione (TPD) and DPP units both have been also widely used as building blocks and electron-withdrawing groups in high performance conjugated polymers due to their symmetric, rigidly fused, and coplanar structures [11,27,28,29,30]. For these three polymers, their optical, thermal, molecular energy levels, crystallographic, and photovoltaic properties were characterized carefully and systematically, making comparisons between each of them. The best PSCs based on PTTVBDT-TPD/PC61BM gave a PCE of 5.01% with monochromatic incident photon-to-electron conversion efficiency (IPCE) >60% over the range of 340–600 nm under AM 1.5G illumination with an intensity of 100 mW·cm−2.

The polymer solar cells (PSCs) were fabricated with the structure of ITO/PEDOT:PSS/polymer:PC61BM/Ca/Al from our previous work [20,26]. The ITO glasses were cleaned by a sequential ultrasonic treatment in detergent, deionized water, acetone, and isopropanol for 20 min. Then PEDOT:PSS was filtered through a 0.2-μm filter and spin-coated at 3500 rpm for 30 s on top of ITO electrode. Subsequently, the PEDOT:PSS film was baked at 140 °C for 10 min in the air, and then moved into a glovebox. The blend solution of PC61BM and synthesized polymers in a solvent was filtered with/without a 0.45-μm filter and spin-coated at 800 rpm for 30 s on top of the PEDOT:PSS layer. These devices were thermally annealed at various temperatures for 10 min, followed by capping with Ca (~20 nm) and then Al (~60 nm) in a thermal evaporator at a base pressure of ca. 10±6 Pa. The active area of the devices is 0.06 cm2. The current density–voltage (J–V) measurements of the devices were conducted on a computer-controlled Keithley 2400 Source Measure Unit under AM 1.5G simulated solar irradiation at 100 mW·cm−2. The light incident intensity was calibrated by a mono-Si reference cell with a KG5 filter (PV Measurements, Inc., Boulder, CO, USA), which was pre-calibrated by the National Renewable Energy Laboratory. The space charge limited currents (SCLC) measurements were carried out using a Keithley 2400 source meter (Keithley, Cleveland, OH, USA) under dark condition. The hole mobilities of were evaluated in a hole-only device configuration, ITO/PEDOT:PSS/(pristine polymer thin films or blend with PC61BM) (~200 nm)/Au (~80 nm); the electron mobilities of were evaluated in a device configuration, ITO/SAM-NH2 (self-assembled monolayer, 4-aminobenzoic acid)/(pristine polymer thin films or blend with PC61BM)/Ca (~20 nm)/Al (~60 nm). The IPCE spectra were recorded under illumination by a xenon lamp and a monochromator (TRIAX 180, JOBIN YVON, Edison, NJ, USA), and the light intensity was calibrated by using an OPHIR 2A-SH thermopile detector (OPHIR Photonics, North Logan, UT, USA).

2.4. Synthesis of Monomers and Polymers

2.4.4. Standard Procedure of Polymerization and Purification

Monomers were first weighted into a 50 mL two neck round-bottom flask and then subjected to three successive cycles of vacuum followed by refilling with nitrogen. Then, Pd2dba3 (3 mol %)/P(o-tol)3 (6 mol %) were dissolved in anhydrous chlorobenzene and added into the reaction mixture via a syringe. The polymerization was carried out at 110 °C for 72 h. The raw product was dissolved by chloroform, then precipitated into methanol and collected through a Soxhlet thimble by filtration, which was then subjected to Soxhlet extraction with methanol, acetone, hexanes, methylene chloride and chloroform. The final polymer was recovered from chloroform fraction by rotary evaporation and dried in vacuum for 12 h at 60 °C. 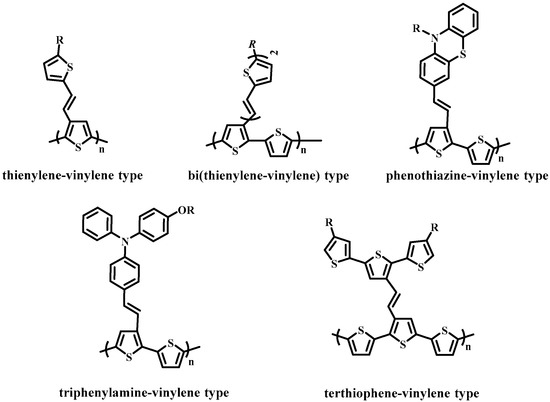 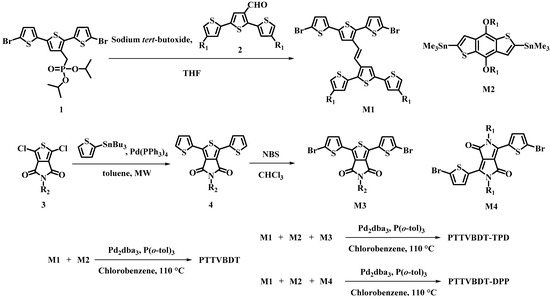 Table 1. Polymerization results and thermal properties of copolymers.
a Mw, Mn, and PDI of the polymers were estimated by GPC using polystyrene as standards in THF; b m/n ratio was calculated by elemental analyses; c 5% weight-loss temperature measured by TGA under N2 atmosphere.

Table 2. Optical and electrochemical properties of the polymers.
a Measured in dilute CB solution (<10−3 g/L); b Samples were prepared by spin-coating from CB solution (10 g/L) on glass substrate and then thermal annealed at 120 °C, 20 min; c Estimated from the onset wavelength of the thin-film absorption spectra: Eg, opt. = 1240/λonset; d HOMO energy levels were evaluated by ultraviolet photoelectron spectroscopy (AC2 equipment) from UV–vis thin-film samples; e Calculated according to the equation: LUMO = HOMO + Eg, opt. (eV).