This paper discusses the long-term behavior of a series of highly-loaded, spun concrete pole specimens prestressed with carbon fiber-reinforced polymer (CFRP) tendons, which were subjected to outdoor four-point bending creep tests since 1996 in the frame of collaboration with the Swiss precast concrete producer, SACAC (Società Anonima Cementi Armati Centrifugati). The 2 m span cylindrical beams studied are models for lighting poles produced for the last 10 years and sold on the European market. Five thin-walled pole specimens were investigated (diameter: 100 mm; wall-thickness: 25–27 mm). All specimens were produced in a pretensioning and spinning technique and were prestressed by pultruded CFRP tendons. Initially, two reference pole specimens were tested in quasi-static four-point bending to determine the short-term failure moment and to model the short-term flexural behavior. Then, three pole specimens were loaded to different bending creep moments: while the lowest loaded specimen was initially uncracked, the second specimen was loaded with 50% of the short-term bending failure moment and exhibited cracking immediately after load introduction. The highest loaded pole specimen sustained a bending moment of 72% of the short-term bending failure moment for 16.5 years before failing in July 2013, due to the bond failure of the tendons, which led to local crushing of the high-performance spun concrete (HPSC). Besides this, long-term monitoring of the creep tests has shown a limited time- and temperature-dependent increase of the deflections over the years, mainly due to the creep of the concrete. A concrete creep-based model allowed for the calculation of the long-term bending curvatures with reasonable accuracy. Furthermore, the pole specimens showed crack patterns that were stable over time and minimal slippage of the tendons with respect to the pole’s end-faces for the two lower load levels. The latter proves the successful and durable anchorage of these novel CFRP prestressing tendons in thin-walled, precast concrete members under realistic long-term service loads. View Full-Text
Keywords: carbon fiber-reinforced polymer; precast concrete; prestressed concrete; creep behavior; concrete poles carbon fiber-reinforced polymer; precast concrete; prestressed concrete; creep behavior; concrete poles
►▼ Show Figures 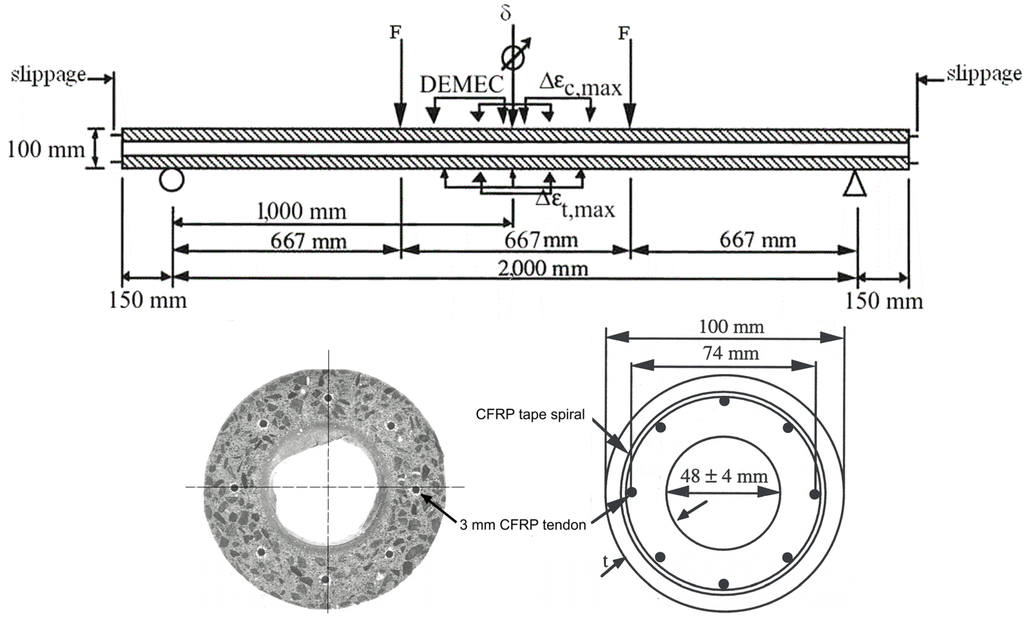