Gradient Hydrogels—Overview of Techniques Demonstrating the Existence of a Gradient

:
Gradient hydrogels are promising future materials which could be usable in tissue engineering (scaffolds), pharmaceutical (drug delivery systems with controlled release) and many others related disciplines. These hydrogels exhibit a more complex inner (gradient) structure (e.g., concentration gradient) than simple isotropic hydrogel. Gradient-structured hydrogels could be beneficial in, for example, understanding intercellular interactions. The fabrication of gradient hydrogels has been relatively deeply explored, but a comprehensive description of the physico-chemical techniques demonstrating the existence of a gradient structure is still missing. Here, we summarize the state-of-the-art available experimental techniques applicable in proving and/or describing in physico-chemical terms the inner gradient structure of hydrogels. The aim of this paper is to give the reader an overview of the existing database of suitable techniques for characterizing gradient hydrogels.
Keywords:
gradient hydrogels; concentration gradient; physico-chemical techniques for gradient proof; intelligent supramocelular gels; biopolymer 3D gels

Gradient hydrogels are a type of special hydrogel with a more sophisticated and controlled architecture [1,2]. As the name indicates, they do not have an isotropic structure but inherently contain a property (or properties) that change in space. These may include structural, compositional, or functional properties. Gradients can be made either as steps or non-abrupt, i.e., exhibiting a continuously changing slope. Naturally, it is of crucial importance to verify the formation of the desired gradient.
The introduction of a gradient represents one of the techniques for tailoring hydrogel properties to various applications [3,4,5]. Often the gradient structure is inspired by materials found in nature and intended for medical applications [6,7,8]. Recently, we conducted a review of recent advances in the preparation of gradient hydrogels where such aims were also reported [9]. In a response to that paper, an anonymous reviewer suggested that we also perform an overview of instrumental techniques used to prove the existence of gradients and to characterize them. This was the motivation for the current paper, which thus complements the previous review. We focused on relatively recent works, preferably not older than about five years, in order to provide an overview of the current state of the art in this area.
The reported techniques were grouped under several headings, which are reviewed separately. Usually, authors use multiple techniques to characterize their hydrogels from different points of view, and sometimes gradient observation or verification was performed with more than one method. In those cases, we report on the basic principle of gradient formation at the first appearance of the work referred to. A detailed overview of related techniques is provided in the Supplementary Materials (Table S1).

Visual inspection is the simplest, most straightforward method with low resolution. It usually requires coloring with a suitable dye, which itself should not create a “false gradient”. Its application is self-evident, and we will thus report only a few examples randomly selected from recent literature.
Gharazi et al. prepared hydrogels consisting of several distinct zones progressively differing in their stiffness [10]. In other words, a steep mechanical gradient was formed. The zones were covalently crosslinked. For the preparation of the soft and stiff zones, two different materials with controlled crosslinking density were used. To visualize zones with different composition and stiffness, the precursors of different zones were colored with different dyes (rhodamine 6G, malachite green), and the natural appearance of some zones (transparent versus white) was used. The result was a cylindrical length of hydrogel with, for example, four clearly distinct colored parts.
A similar approach was used by Cho to visualize their multi-compartmental hydrogel microparticles [11]. The compartments differed in their compositions and were colored by Alexa fluorescent dyes added to the gel precursor solutions.
A continuous, progressive gradient was formed by Cross et al. by adding two pre-polymers in the opposite sides of a flat rectangular well [12]. A gradient was formed by mutual diffusion at the contact line in the well and fixed by UV-initiated crosslinking. One of the prepolymers was colored (rhodamine B), and the diffusion of the dye was supposed to follow the gradient-forming diffusion. The gradient was thus indirectly but successfully visualized, as illustrated in Figure 1.
Li et al. employed a universal physical principle to prepare gradient hydrogels that could be applied broadly across different material systems [13]. Specifically, they used buoyancy, the upward force generated on liquid injected into a denser fluid phase via a single injection. The gradient formed by buoyancy was then fixed by gelation. This experimental approach was applied for the preparation of gradient hydrogels based on polysaccharides (agarose, gelatin methacryloyl, gellan gum) as well as acrylate polymers. To visualize the resulting gradients, one of the liquids was dye-labeled, or colored. For example, agarose was tagged with rhodamine B and injected into a solution of native agarose, or rhodamine B was added to N,N-dimethylacrylamide, in which it is soluble, in contrast to lauryl methacrylate, the second component forming the acrylic gradient hydrogel. Either a steep or continuous color distribution across the gradient borders was observed, as illustrated in Figure 2.

Gradient hydrogels are often fabricated with regard to their potential use in applications in tissue engineering. In such applications, the hydrogel’s effects on cells are important. Cross et al. [12] encapsulated human mesenchymal stem cells within their gradient hydrogels, which were therefore prepared from solutions in culture media instead of deionized water. The cells were inspected after one and three days at three different locations corresponding to different parts of the gradient. Distinct changes of cell morphology were observed. In the gelatin-rich part, characteristics of osteoblasts in bone were detected, whereas in the carrageenan-rich part the morphology of chondrocytes in cartilage was found. At the interface, both morphologies were present, which was considered proof of the smoothness of the gradient. The average cell adhesion area decreased from the gelatin part through the interface to the carrageenan part.
Tan et al. [28] fabricated a laponite-crosslinked gradient hydrogel based on copolymer of (N,N-diethylacrylamide and (2-dimethylamino) ethylmethacrylate. The laponite concentration was determined using the thermogravimetric analysis (TGA) of samples taken from three different locations of the final material. TGA showed different residual masses of laponite for samples with different of Lap particles at 900 °C. This laponite migration was further confirmed together with the migration of the gel-forming polymer by FTIR spectra taken from the same locations. These three-point characterizations suggested the gradient distribution of laponite and polymer in the hydrogel matrix.
Kechun Guo et al. used another interesting approach to evaluate the gradient structure of anisotropic cellulose hydrogels [29]. Calcium ions were arranged to diffuse into a cellulose sol causing the gradual orientation of the cellulose chains and forming the cross-linking structure of a gel. At the bottom of the respective mold, the Ca2+ concentration and the density of the cellulose chains were the highest, while the concentration of Ca2+ at the opposite end was the lowest and the cellulose chains were thus loose and oriented in a disorderly manner. The gradient structure was inspected with a polarizing microscope, see Figure 11. At the bottom, hydrogels exhibited obvious birefringence and the interference was denser. In contrast, at the opposite end, the interference color was hardly observed. The birefringence gradually decreased with the direction of Ca2+ diffusion (from the bottom up).

An ideal technique for proving gradients in hydrogels should allow continuous monitoring of the formed gradient across its full length. In some cases, this is possible; the simplest way would be via the visual inspection of dyed gradients; at a more advanced level, such monitoring could be achieved by taking spatial spectroscopic images. Evidently, the success of this “holistic” approach will be a result of the combination of the dimensional subtleness of the gradient and spatial window and the resolution of the imaging technique.
More often, the hydrogel is sampled across the expected gradient and the “point samples” are analyzed using a suitable technique. Such discrete points are used to reconstruct the gradient and its shape. This approach is most appropriate in the case of steep gradients, when a smaller number of properly located sampling points is sufficient. An indirect alternative can be used in the case of (steep) gradients formed by layering, when the individual layers can be analyzed separately, even without being layered into the final material.
Though hydrogels are three-dimensional materials, perhaps all gradients are two-dimensional. That is, gradients are formed along the (longer) axis and not across the cross-sections. However, the characterization of a potential cross-sectional gradient should be realized by the same techniques applied on cross-cut samples.

This research was funded by Materials Research Centre at BUT-Sustainability and Development, by the Ministry of Education, Czech Republic, (project No. LO1211) . 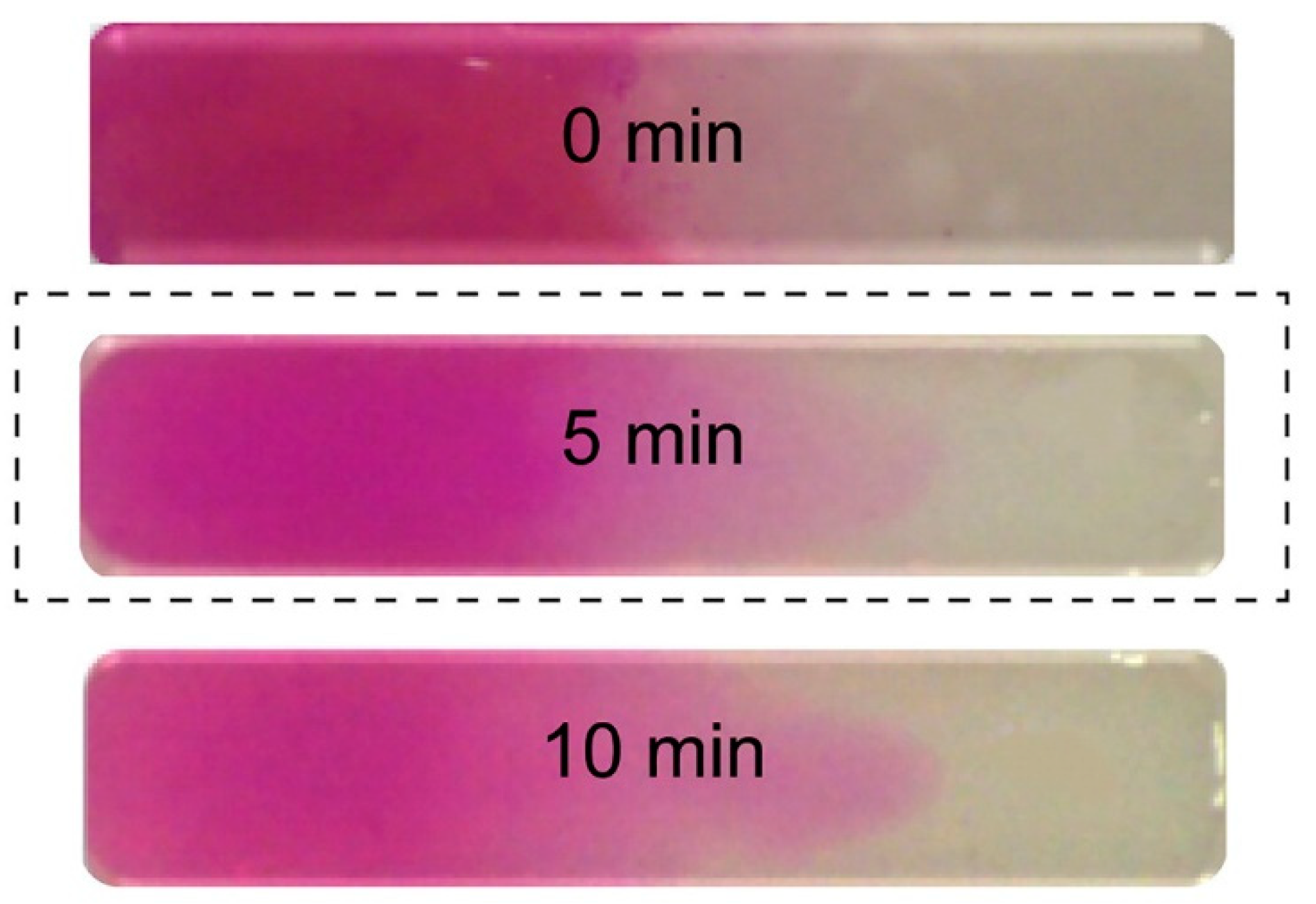 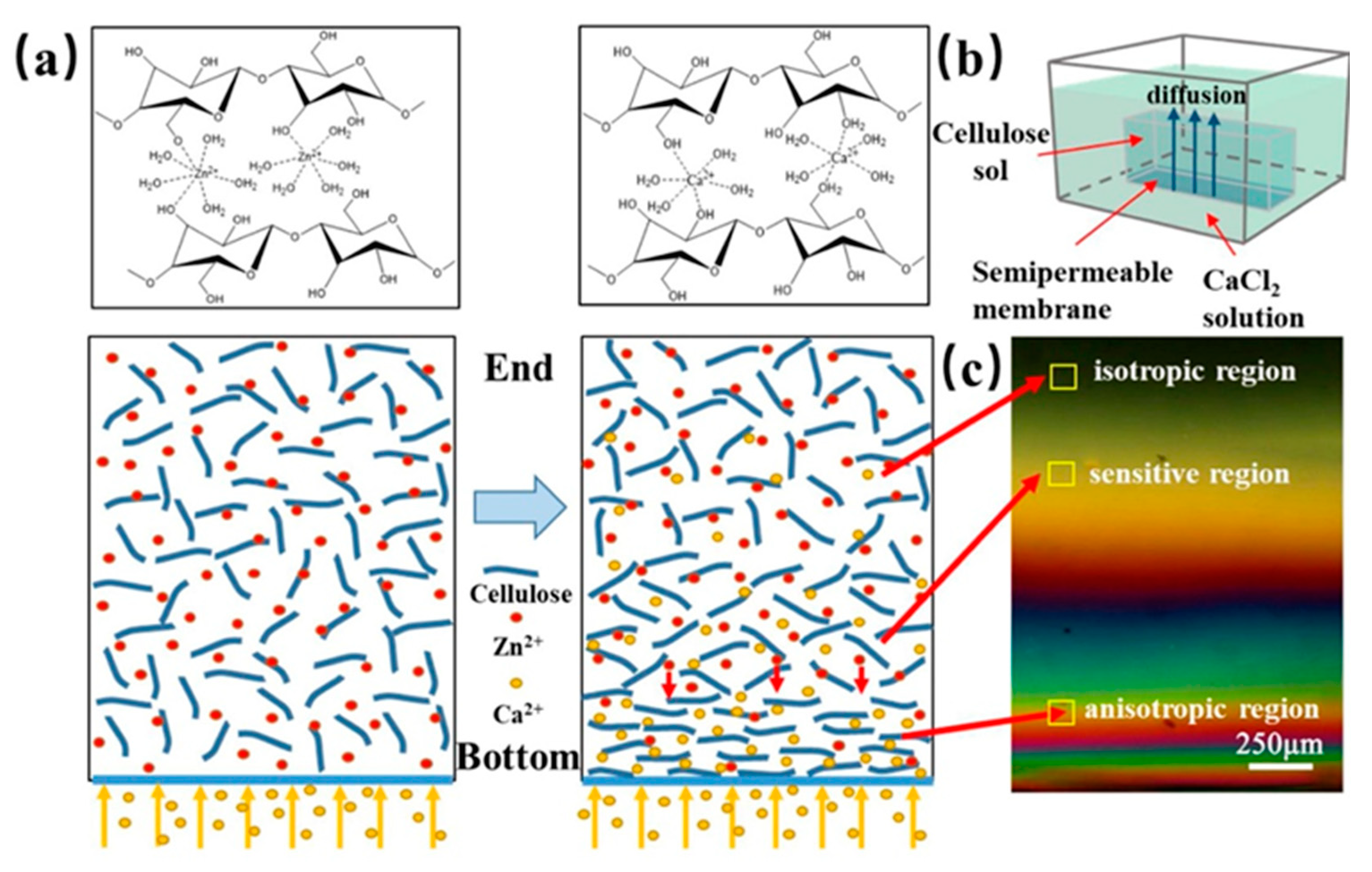