Rheological, Surface Tension and Conductivity Insights on the Electrospinnability of Poly(lactic-co-glycolic acid)-hyaluronic Acid Solutions and Their Correlations with the Nanofiber Morphological Characteristics
Next Article in Special Issue

:
The development of environmentally friendly antifouling strategies for marine applications is of paramount importance, and the fabrication of innovative nanocomposite coatings is a promising approach. Moreover, since Optical Coherence Tomography (OCT) is a powerful imaging technique in biofilm science, the improvement of its analytical power is required to better evaluate the biofilm structure under different scenarios. In this study, the effect of carbon nanotube (CNT)-modified surfaces in cyanobacterial biofilm development was assessed over a long-term assay under controlled hydrodynamic conditions. Their impact on the cyanobacterial biofilm architecture was evaluated by novel parameters obtained from three-dimensional (3D) OCT analysis, such as the contour coefficient, total biofilm volume, biovolume, volume of non-connected pores, and the average size of non-connected pores. The results showed that CNTs incorporated into a commercially used epoxy resin (CNT composite) had a higher antifouling effect at the biofilm maturation stage compared to pristine epoxy resin. Along with a delay in biofilm development, a decrease in biofilm wet weight, thickness, and biovolume was also achieved with the CNT composite compared to epoxy resin and glass (control surfaces). Additionally, biofilms developed on the CNT composite were smoother and presented a lower porosity and a strictly packed structure when compared with those formed on the control surfaces. The novel biofilm parameters obtained from 3D OCT imaging are extremely important when evaluating the biofilm architecture and behavior under different scenarios beyond marine applications.
Keywords:
marine biofouling; cyanobacterial biofilms; antifouling surfaces; carbon nanotubes; Optical Coherence Tomography

To assess the surface antifouling performance on cyanobacterial biofilm development, two control surfaces (glass, a commonly submerged artificial surface found on different equipment in aquatic and marine environments, and epoxy resin, a commercially available coating) and a CNT composite were used. The epoxy resin-coated glass was prepared following the protocol described by Faria et al. [31]. Briefly, the epoxy resin was produced by HB Química (Matosinhos, Porto, Portugal) and consisted of a mixture of HB Eposurf 2 resin and HB Eposurf hardener in a ratio of 10:3 (v/v). To produce the epoxy resin-coated surfaces, 70 μL of epoxy resin was deposited on the top of glass coupons using spin coating (Spin150 PolosTM, Paralab, Porto, Portugal) at 6000 rpm, with increments of 1000 rpm, for 40 s. The surfaces were dried for over 12 h at room temperature and then for 3 h at 60 °C, according to the instructions of the manufacturer.
The methodology for the preparation of the CNT composite surface was adapted from Gomes et al. [11], in which the PDMS matrix was replaced by epoxy resin. Briefly, commercially available pristine MWCNTs (NanocylTM NC3100, Sambreville, Belgium), produced by catalytic chemical vapor deposition with an average length and diameter of 1.5 µm and 9.5 nm, respectively, were used. CNTs were physically modified by BM treatment (Retsch MM200, Haan, Germany) at 15 vibrations s−1 for 4 h. After mixing the two epoxy resin portions, 3 wt% of CNTs was incorporated into the epoxy resin mixture since it was shown to be the most effective CNT load to reduce bacterial biofilm formation in previous studies [11]. After that, 70 μL of the composite (3 wt% CNT-BM/epoxy resin) was deposited on the top of the glass coupons using spin coating, as reported above. In previous work [11], our research group showed that bare PDMS surfaces and CNT composites had a similar film thickness (about 30 μm).

The wettability of glass, epoxy resin, and CNT composite surfaces was assessed by measuring the contact angles with water (). This determination was performed using the sessile drop method on an SL200C optical contact angle meter (Solon Information Technology Co., Ltd., Shanghai, China) at room temperature (25 °C), as previously described [32]. At least 25 determinations for each material were made.

AFM studies were performed using a Bruker Catalyst microscope in contact mode by a DNP-D cantilever with a spring constant of 0.06 N/m (Bruker, Billerica, MA, USA). The surface roughness was determined from random areas (75 × 75 or 100 × 100 µm2) on two coupons of each material at room temperature. Surface roughness calculations and 2D images were made using the NanoScope Analysis software from Bruker. The roughness height parameter determined was the average roughness (), which gives the average absolute deviation of the roughness irregularities from the mean line over one sampling length [33].

To mimic the hydrodynamic conditions found in marine environments, biofilm formation was evaluated on agitated 12-well microtiter plates (VWR International, Carnaxide, Portugal) under previously optimized conditions for cyanobacterial biofilm development [36]. Firstly, transparent double-sided adhesive tape was placed in the wells to fix the coupons. All coupons and plates were then subjected to UV sterilization, after which the sterile coupons were fixed as previously described [11,36].
Prior to inoculation, the cyanobacterial suspensions were adjusted to a chlorophyll a concentration of 0.77 ± 0.03 μg/mL, since chlorophyll a quantification is a common method to estimate the biomass in marine environments, and this pigment is unique and predominant in all groups of cyanobacteria [36,37]. Briefly, cells were harvested by centrifugation (3202× g, for 5 min at room temperature), the supernatant was discarded and a volume of 2 mL of 99.8% methanol (Methanol ACS Basic, Scharlau Basic, Barcelona, Spain) was added. Then, the cyanobacterial suspension was incubated for 24 h at 4 °C in the dark for maximal chlorophyll a extraction, the samples were centrifuged at 3202× g for 5 min at room temperature and the supernatant was transferred to a glass cuvette. Absorbance measurements were performed at 750 nm (turbidity), 665 nm (chlorophyll a), and 652 nm (chlorophyll b) using a V-1200 spectrophotometer (VWR International China Co., Ltd., Shanghai, China). The values obtained were used to calculate the chlorophyll a concentration (μg/mL) through Equation (1) [38]:
These measurements were assessed in triplicate and dilutions were performed using Z8 medium supplemented with 25 g/L of synthetic sea salts and vitamin B12. A volume of 3 mL of the respective adjusted cyanobacterial suspension was inoculated in each well. Microtiter plates were then incubated at 25 °C in an orbital shaker with a 25 mm orbital diameter (Agitorb 200ICP, Norconcessus, Ermesinde, Portugal) at 185 rpm, resulting in an average and maximum shear rate of 40 and 120 s−1, respectively [36]. Biofilm formation in this system includes the shear rate estimated for a ship in a harbor, 50 s−1 [39], and it was shown to predict the biofouling behavior observed upon immersion in the sea for prolonged periods [40]. In order to mimic real light exposure periods, microtiter plates were kept under 14 h light (8–10 μmol photons m−2 s−1)/10 h dark cycles [36]. Biofilm development was followed for seven weeks (49 days) since a two-month interval for maintenance is the minimum duration for economically viable underwater monitoring systems [36]. During this incubation time, the medium was replaced twice a week.

After 49 days of incubation, the morphology of cyanobacterial biofilms formed on the three surface materials was analyzed by SEM. Coupons were removed from the microtiter plates, dehydrated in aqueous solutions of increasing ethanol concentrations (10, 25, 40, 50, 70, 80, 90, and 100% (v/v)) and left in a desiccator until SEM analysis [44]. The samples were then sputter-coated using the equipment and conditions described in Section 2.2.3 and observed in a Supra 40 VP scanning electron microscope (Carl Zeiss Ltd., Cambridge, UK) at a 2 kV accelerating voltage and a magnification of 1000×.

It is recognized that surface properties such as topography and physicochemistry affect their antiadhesive and/or antimicrobial behavior [45,46]. Thus, all tested surfaces were first investigated regarding (i) wettability by water contact angle measurements, (ii) topography and roughness by Atomic Force Microscopy (AFM), and (iii) morphology and structure by Scanning Electron Microscopy (SEM). The results obtained from the water contact angle measurements and roughness analysis are shown in Table 2. Given that substrates with a water contact angle () of <90° are considered to be hydrophilic [47], glass is the most hydrophilic surface ( = 40.9° ± 7.4°), followed by the CNT composite ( = 68.9° ± 4.9°), and the epoxy resin-coated glass ( = 76.3° ± 2.5°), which is significantly more hydrophobic (p < 0.05) than the resin composite. Lower hydrophobic properties caused by the incorporation of 3 wt% ball-milled CNTs were also observed in previous work in another polymeric matrix (PDMS) [11]. Regarding the average roughness () value determined by AFM (Table 2), glass and epoxy resin appeared to be smoother surfaces ( of 6.3 and 13 nm, respectively) than the CNT composite, which registered a value of about 70 times higher than the remaining surfaces.
Figure 2 reveals the topography and morphology of the tested surfaces obtained from AFM and SEM imaging, respectively. Glass and epoxy resin-coated glass were the most homogeneous and smooth materials (Figure 2a,b,d,e). In opposition, the CNT composite (Figure 2c,f) was the roughest surface, presenting CNT agglomerates that form small elevations on the material (Figure 2f).

A set of novel structural parameters obtained from OCT imaging was developed to quantify the marine biofilm structure over time and on three different surface materials, one of them with recognized antifouling activity. CNT-modified surfaces delayed cyanobacterial biofilm development in the maturation stage of the biofilm. Biofilms developed on the composite had reduced wet weight, thickness, and biovolume and were smoother and less porous than those formed on epoxy resin and glass (control surfaces). Analysis of novel parameters obtained by OCT imaging enables a deeper understanding of the biofilm development process in different settings, including the marine environment.

The following supporting information can be downloaded at: https://www.mdpi.com/article/10.3390/polym14204410/s1, Figure S1: Representative SEM image of an agglomerate of CNTs on the CNT composite surface. Magnification = 10,000×; scale bar = 1 µm.

The data presented in this study are available from the corresponding author upon request.

Kathryn Whitehead from Manchester Metropolitan University is acknowledged for providing the scanning electron microscope used for surface and biofilm characterization. 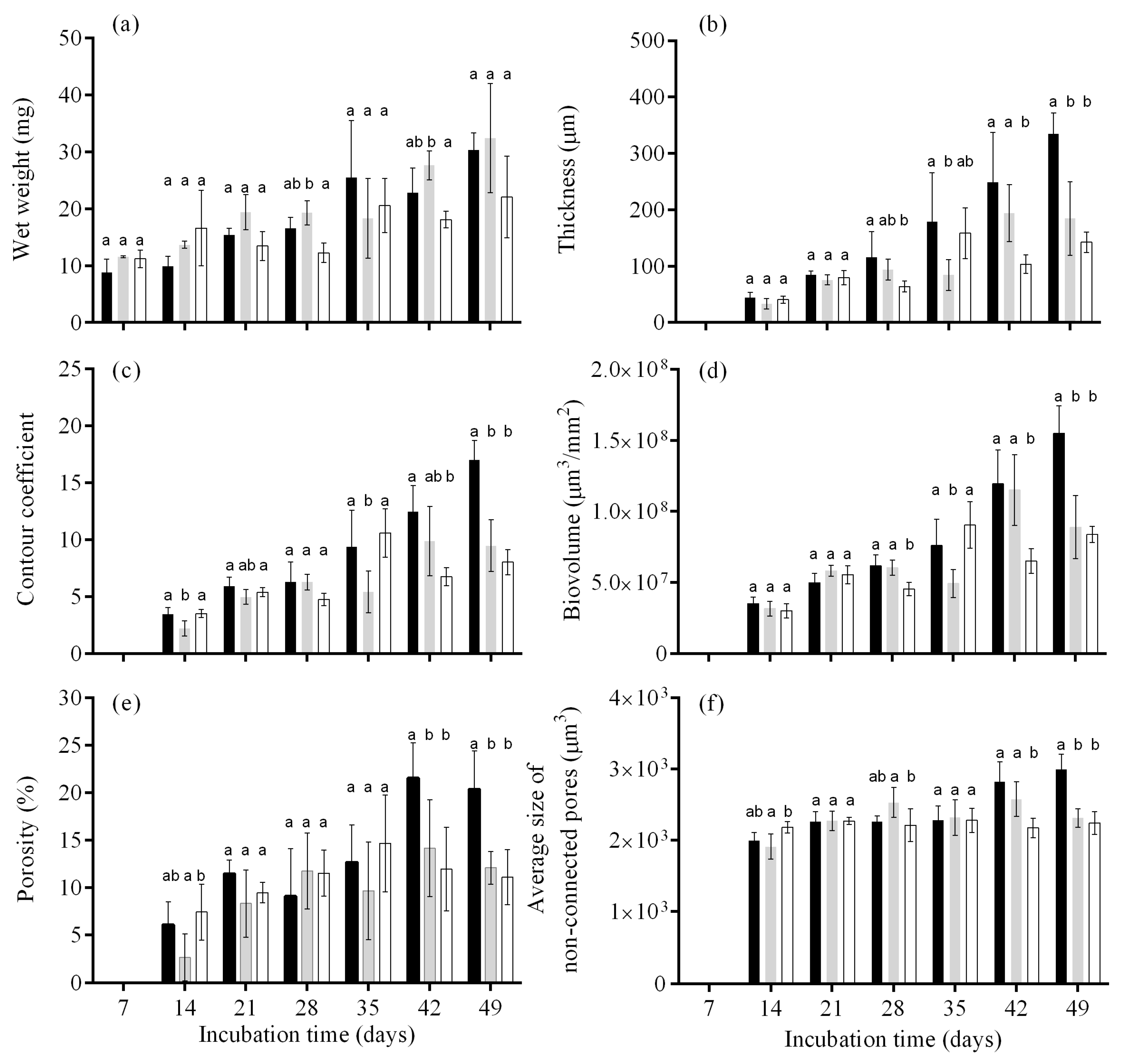