Since the discovery of chiral resolution in achiral bent-core (BC) molecular systems [1], studies on such molecules have been actively conducted by chemists and physicists in the field of liquid crystal (LC) science [2,3,4,5,6,7,8,9,10,11]. The LC phases found in BC molecular systems differ from the conventional phases found in classic calamitic or discotic ones [12,13]. Among the LC phases in BC systems, the helical nanofilament (HNF) B4 phase has attracted significant interest owing to its unprecedented chiral superstructure, in which twisted nanofilaments are formed through the self-assembly of achiral molecules [14]. Subsequent studies considered the B4 phase to be semi-crystalline rather than LC [15]. However, the subject of chirality-related properties, such as strong optical activity and large effective nonlinear optical coefficients, has inspired several LC research groups [14].
Another intriguing symmetry-broken phase observed in achiral BC molecular systems is the dark conglomerate (DC) phase [5,14]. This phase is generally observed after direct cooling in the isotropic phase, which is optically isotropic and forms a macroscopic chiral domain. Although the optical appearance of the DC phase is similar to that of the B4 phase, the DC phase is fluid and can be considered to be a disordered lamellar phase resembling the lyotropic sponge (focal conic) phases, wherein the empty volume is filled by smectic layers with a saddle splay layer deformation [5,10,14]. The DC phase often emerges in BC molecules with a B2 or B7 phase and has been reported in BC polymeric systems [11].
Takanishi et al. reported that when a BC molecule exhibiting the B4 phase is mixed with a rod-like LC molecule, the B4 phase is stabilized preferentially over the other LC phases that appear in BC molecular systems, such as the B2 and B3 phases [16]. Furthermore, the chiral enantiomeric domains become significantly larger (up to a few millimeters larger in size) than those in the B4 phase of the pure BC molecule [16]. Subsequent studies have suggested that the phases in which the enantiomeric domains become unusually large are nanosegregated phases between the B4 phase (originating from BC molecules) and the calamitic phases (originating from rod-like molecules) [9,14]. Otani et al. examined the behavior of rod-like molecules in nanosegregated phases in which the rod-like molecules were embedded in the framework of the HNF B4 structure network, that is, a network of HNFs, formed by the BC molecules [17]. Based on circular dichroism (CD) observations, it was suggested that the rod-like molecules in the network of HNFs form a chiral superstructure that is affected by the HNF structure; thus, the chirality of the binary system can be boosted [17,18].
In this study, we performed chiroptical observations on a novel binary mixture consisting of a host BC molecule possessing the HNF B4 phase and a guest BC-based main-chain polymer (BCMP) possessing a DC phase. Binary systems composed of low-molecular BCs and BC-based polymers have rarely been investigated; therefore, details on the chiroptical properties of the intermediate phases of binary systems have also rarely been reported. Two different nanosegregated phases were identified in this binary system using polarized optical microscopy (POM), differential scanning calorimetry (DSC), and X-ray diffraction (XRD) analysis. In the nanosegregated phase observed in the high-temperature range, the BC molecule was in the B2 phase and the BCMP was in the DC phase. In the low-temperature nanosegregated phase, in which the BC molecule was in the HNF B4 phase and the BCMP was in the DC phase, the enantiomeric domains grew to a few millimeters in size, and a significantly strong CD intensity was observed.

The chemical structures of the BC and BCMP used in this study are presented in Figure 1a. The BC molecule and BCMP were synthesized by our group. The BC and BCMP were synthesized using the methods reported by Akutakawa [19] and Gimeno [11], respectively. The phase sequences of the pure BC molecule and BCMP upon cooling were Iso-172 °C-B2-145 °C-B3-138 °C-B4 and Iso-168 °C-DC, respectively. The BC molecule and BCMP used contained the HNF B4 and DC phases in the low-temperature range, respectively. Figure 1b shows typical POM images of the HNF B4 phase (BC molecule) and DC phase (BCMP). Upon the uncrossing of the polarizer by moving it clockwise and counterclockwise by a few degrees, the interchanging of the colors of the two small, grainy domains in the HNF B4 phase corresponding to the BC molecule could be observed, indicating the existence of two enantiomeric domains with an almost identical degree of optical rotation but different signs [14]. Similarly, the two different-colored domains observed in the DC phase corresponding to the BCMP under uncrossing conditions suggest that the two enantiomeric domains had the same degree of optical rotation but different signs [14].

One-dimensional XRD measurements were performed employing a rotating-anode X-ray generator (Cu-Kα) and a diffractometer (Rigaku, Austin, TX, USA). The widths and peak positions of the diffraction angles were calibrated using silicon crystals. To monitor the changes in the local structure with respect to temperature, a hot stage calibrated with an error margin of ±1 °C was coupled to the diffractometer. The samples were scanned across the q range of 1–5 nm−1 at a scanning rate of 1 °C min−1.

The mixture was injected into a sandwich cell (cell gap less than 2 μm) consisting of two quartz substrates. The inner surfaces of the cell were left untreated to prevent the phases from exhibiting a large birefringence. CD spectra were recorded using a CD spectrometer (J-815, Jasco, Hachioji, Japan). The CD signals were detected from an area of 1 mm in diameter.

We focused on the nanosegregated <B4/DC> phase with unusually large enantiomeric domains (a few millimeters in size) and giant CD signals. Figure 6a shows a comparison of the typical induced CD spectra of pure HNF B4 (BC molecule), pure DC (BCMP), and <B4/DC> (binary mixture). The absorbance spectra of the BC molecule and BCMP are presented in the inset of Figure 6a. A large optical rotation was predicted for the DC phase [5]; however, the observed CD signals were negligible in this case. This was because the observed spot size (1 mm in diameter) was larger than that of the enantiomeric domains (a few hundred micrometers) of the DC phase. Although a single enantiomeric domain possesses a large optical rotation, the two small enantiomeric domains with almost the same degree of optical rotation but different signs, and observed within the same spot size, canceled each other out. However, in <B4/DC>, the sizes of the enantiomeric domains increased to a few millimeters (see Figure 2b), and a significantly strong CD intensity signal was observed, as shown in Figure 6a. The small (or negligible) CD signals of HNF B4 (or DC) were amplified by the nanosized separation between HNF B4 and DC. The effect of linear birefringence in <B4/DC> should be considered because the observed CD is the sum of the actual CD and the sample birefringence [18]. To confirm that the linear birefringence did not contribute to the CD signal, POM images were taken while rotating the cell about the cell surface normal under uncrossing conditions. As shown in Figure 6b, the two colors attributable to the two enantiomeric domains with almost the same degree of optical rotation but different signs were not inverted by the rotation of the cell. Thus, the significantly strong CD signals of <B4/DC> are attributable to actual CD and not to linear birefringence.
These unusual phenomena observed in <B4/DC> are similar to those reported in the nanoseparation phases in a mixture consisting of BC and calamitic molecules [17,18]. The structural chirality of HNF B4 affects the conformation of the BCMP embedded within the HNF B4 networks of the BC molecules, causing the BCMP to exhibit a chiral conformation, as shown in Figure 7. In addition, the structural chirality in HNF B4 was amplified by the DC medium of the BCMP. Thus, the flexibility of the polymeric chains consisting of DC affected the chiral conformation of the BCMP. As shown in Figure 5b, at a temperature of 50 °C, which is the Tg of the BCMP, the CD intensity in <B4/DC> decreased. This is because the effect of the structural chirality of HNF B4 on the conformation of the BCMP was weakened by the lowered flexibility of the polymer chains in the DC phase.

There are no conflict to declare. 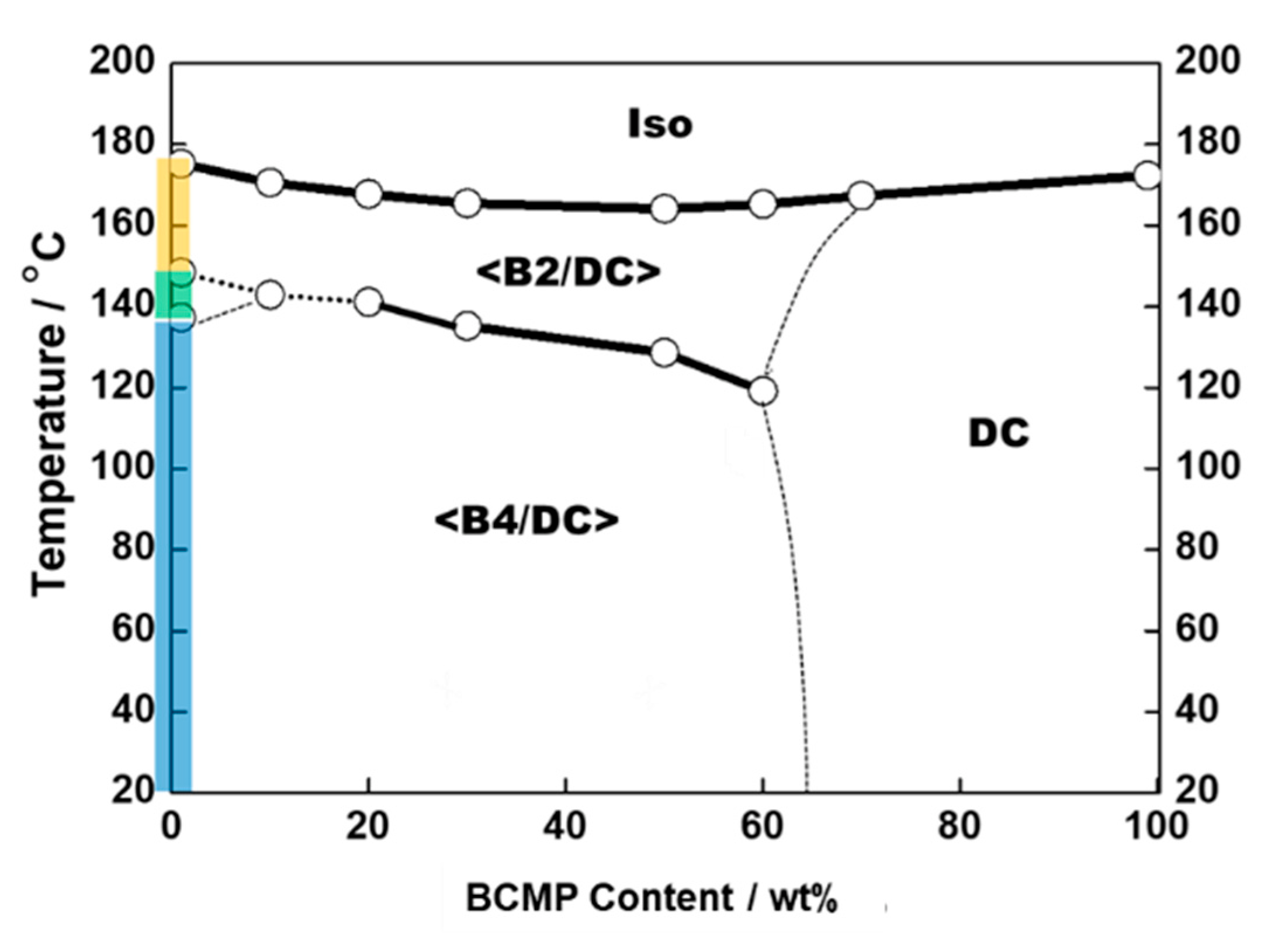