When producing stable electrodes, polymeric binders are highly functional materials that are effective in dispersing lithium-based oxides such as Li4Ti5O12 (LTO) and carbon-based materials and establishing the conductivity of the multiphase composites. Nowadays, binders such as polyvinylidene fluoride (PVDF) are used, requiring dedicated recycling strategies due to their low biodegradability and use of toxic solvents to dissolve it. Better structuring of the carbon layers and a low amount of binder could reduce the number of inactive materials in the electrode. In this study, we use computational and experimental methods to explore the use of the poly amino acid poly-L-lysine (PLL) as a novel biodegradable binder that is placed directly between nanostructured LTO and reduced graphene oxide. Density functional theory (DFT) calculations allowed us to determine that the (111) surface is the most stable LTO surface exposed to lysine. We performed Kubo–Greenwood electrical conductivity (KGEC) calculations to determine the electrical conductivity values for the hybrid LTO–lysine–rGO system. We found that the presence of the lysine-based binder at the interface increased the conductivity of the interface by four-fold relative to LTO–rGO in a lysine monolayer configuration, while two-stack lysine molecules resulted in 0.3-fold (in the plane orientation) and 0.26-fold (out of plane orientation) increases. These outcomes suggest that monolayers of lysine would specifically favor the conductivity. Experimentally, the assembly of graphene oxide on poly-L-lysine-TiO2 with sputter-deposited titania as a smooth and hydrophilic model substrate was investigated using a layer-by-layer (LBL) approach to realize the required composite morphology. Characterization techniques such as X-ray photoelectron spectroscopy (XPS), atomic force microscopy (AFM), Kelvin probe force microscopy (KPFM), scanning electron microscopy (SEM) were used to characterize the formed layers. Our experimental results show that thin layers of rGO were assembled on the TiO2 using PLL. Furthermore, the PLL adsorbates decrease the work function difference between the rGO- and the non-rGO-coated surface and increased the specific discharge capacity of the LTO–rGO composite material. Further experimental studies are necessary to determine the influence of the PLL for aspects such as the solid electrolyte interface, dendrite formation, and crack formation. View Full-Text
Keywords: density functional theory; molecular interface design; electrode; anode; polypeptide interfactant density functional theory; molecular interface design; electrode; anode; polypeptide interfactant
►▼ Show Figures 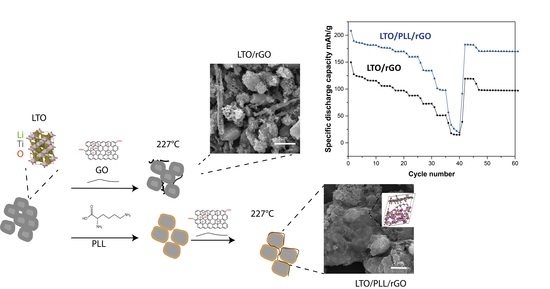