For this study, two 3D printing material types, standard PLA and Tough PLA, are used. Table 1 and Table 2 show the specifications and mechanical properties of PLA and Tough PLA filaments [29].

For this study, the experimental work consisted of preparation of the standardised tensile test specimens using a 3D printer, testing of 3D-printed specimens and detailed microstructural analysis of the outer and inner surfaces of the 3D-printed specimens. Information about each step is provided in detail below.

Firstly, the test specimens were prepared using 3D printer according to the required specifications. For that, the 3D CAD SolidWorks 2019 software was used to develop three-dimensional virtual geometry of the test specimen. The geometry of the specimen was developed according to the ASTM D638 standard tensile test specimen [30], as shown in Figure 1. After developing the virtual specimen geometry, the SolidWorks file was converted into STL format. The 3D printer accepts this format to physically print the specimen. Then, the STL file was transferred to the 3D-printer-controlled computer. The 3D printer Ultimaker 2 was employed to print the specimens as it is a powerful, simple and reliable 3D printer technology. It operates through a touchscreen interface that guides and displays detailed status information. Ultimaker Cura 4.3.0—3D printing software was used to prepare the design that was developed in SolidWorks for 3D printing. Figure 2 shows the image of the tensile specimen on the 3D-printer bed captured by the software. This software can manage and monitor the print progress and maintenance schedules, queue prints and manage different software designs. For printing, custom printing settings were used to give in-depth control to the printing software, which allows the printer to specify printing parameter settings such as different raster orientations and infill speeds. This 3D printer extruded the PLA at 200 °C and Tough PLA at 225 °C with the heated bed surface at 60 °C to prevent warping on the first layer of the specimen. The specimens were printed with two raster orientation angles (45° −45°) and (0° 90°) (as shown in Figure 3) at three different infill speeds, 35, 50 and 65 mm/s, respectively. An infill density of 100% and an infill later thickness of 0.1 mm were used for each raster orientation. There were three identical tensile samples printed with each combination of the selected parameters and altogether, 36 samples were printed. Table 3 shows the details of the selected process parameters that were used for 3D printing. All the specimens were built with 750g spools of PLA and Tough PLA materials. Each specimen takes approximately 3 h 30 min to print for material with a mass of 17 g. This printer begins printing first the build of a thin layer of base support and then it builds an outer layer base and fills the specimen with a specific raster orientation.

The material strength of any material is directly related to its microstructure. Therefore, microstructure examination of the fractured surface is vital to understand the failure behaviour and failure mode. In this study, the fractured interface of the tensile specimens after tensile testing were analysed. In addition, the outer surfaces of the tensile specimens were also examined to identify any defect formed during 3D printing. In this study, a scanning electron microscope (SEM) S-3000N Hitachi was used at an acceleration of 5 KV in the high vacuumed mode to examine the microstructure of the material. In order to prepare the samples for SEM analysis, the specimens were broken into small pieces along the fractured surfaces. Then, the samples were vacuum sputter-coated with a thin layer of gold-palladium alloy to eliminate the charging effects of the surface. This thin layer coating is important as it provides a homogeneous surface for analysis and imaging [31].

Figure 9 shows SEM micrographs of the outer top surfaces of the tensile specimens. These micrographs confirm that printed patterns formed with 45° −45° and 0 90° raster orientations.

Any defects, such as openings, cracks, voids and air gaps, in 3D-printed parts adversely affect the material properties of parts. Therefore, these defects must be avoided in the final finished form of a 3D-printed part. In this study, SEM microstructure images were used to identify these defects in 3D-printed specimens that were fabricated using two raster orientations and three different infill speeds.
The specimens that were fabricated with raster angles of 45° −45° and 0° 90° formed compact outer surfaces and any defect cannot be seen on the outer surfaces of the specimens, as reported previously with other roaster angles [26]. Thus, an overall better surface finish was achieved with these two raster angles. However, some inner defects can still be seen on the fracture interfaces for these specimens. In this study, the fracture interface of all the tensile specimens that were printed with twelve different combinations of 3D-printing parameters were investigated to explore the internal quality of the 3D-printed specimens. Figure 10 and Figure 11 show SEM images for all the fractured interfaces that formed after tensile testing. These images identify several problems in the placement of layers in the 3D-printing process.
These images show that both raster orientations formed a series of triangular voids between two layers all along the thickness of the specimen and this occurred in both PLA and tough PLA materials for all twelve combination of process parameters. These voids are most likely related to the deposition angles of the filament (roaster angles) that cause these cavities between two contiguous roasters. Table 6 shows the average area of these triangular voids that were captured during SEM scanning. The area of the voids was calculated by measuring the size of the different voids in the SEM images and then the area was calculated according to the geometry of the voids. Larger voids were formed in the tough PLA materials compared to the standard PLA materials for almost all the specimens. In addition, for tough PLA, larger voids were formed for a raster angle of 45° −45° compared to a raster angle of 0° 90°. For a raster angle of 45° −45°, the size of the voids increases when the infill speed increases. However, for a raster angle 0° 90°, the infill speed had an effect on the size of the voids in the standard PLA. In the tough PLA specimens, triangular-shaped voids can be seen very clearly as well as air gaps between two adjacent layers in the longitudinal direction (parallel to the layer). This defect is unique to tough PLA and it does not appear in standard PLA material. These defects directly affected the specimen’s material strength and formed weaker specimens. Similarly, in this study, the specimens fabricated with tough PLA showed lower tensile strength compared to the specimens fabricated with the standard PLA. A possible reason for the poor performance of the tough PLA is that a different nozzle temperature was used for each material; PLA was extruded at 200 °C and Tough PLA at 225 °C, which caused different heating and cooling rates during the printing process. The 225 °C temperature could form a more complete merge of the roaster but more degradation was generated inside the specimens at micron-level, which led to a decrease in tensile properties [23,27]. The specimen that was fabricated using the standard PLA with a raster angle of 45° −45° and an infill speed of 35 mm/sec shows better results with the highest material strength of 64.57 MPa and less fracture interface defects. It is evident that the strength of these specimens can be further improved by avoiding these printing problems and defects. Thus, raster orientation and infill speed have an effect on 3D-printed part strength. Suitable selection of these process parameters can increase the strength and precision of the part by reducing the gaps between the deposited layers.

In this study, twelve combinations of 3D process parameters of two raster angles and three infill speeds were used to fabricate 3D-printed specimens using standard PLA and tough PLA material types. The following conclusions can be drawn from this study.
Raster orientation and infill speed are the most important parameters for the 3D printing-process and they have a vital role in specimen strength, printing quality and surface finish. Standard PLA produced stronger specimens than tough PLA. However, tough PLA gave better elongation than standard PLA. For both the materials, the raster orientation of 45° −45° with a low infill speed showed a high tensile strength and high elongation at break than the raster orientation of 0° 90°. A low infill speed increases the strength and toughness of the specimens by providing a longer deposition time, which allows adequate time to create a bond between two contiguous roasters. The specimens that were fabricated using standard PLA and tough PLA with raster orientations of 45° −45° and 0° 90° show a similar initial slope in the strain–stress curve. However, after examining the whole curve, it can be identified that the raster orientation of 0° 90° simply shows elastic deformation which signifies stiff material behaviour. Nevertheless, the raster orientation of 45° −45° shows both elastic and plastic deformation and represents hard material behaviour. The raster angle of 45° −45° produces specimen with better strength and more confined fracture surfaces compared to the roaster angle of 0° 90°. The roaster angles of 45° −45° and 0 90° formed compact and smooth outer surfaces for both the material types; those outer surfaces are free from any defects such as voids, air gaps and cracks. The micro-level observations of the fracture interfaces (inner surfaces) show a series of air gaps and voids. These microstructural defects are directly correlated with the tensile strength results. The strength and accuracy of 3D-printed parts can be further improved by avoiding these printing problems and defects. 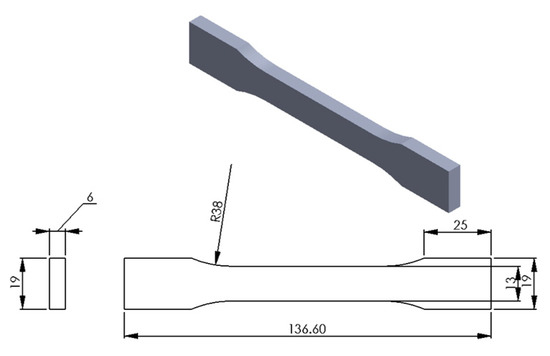 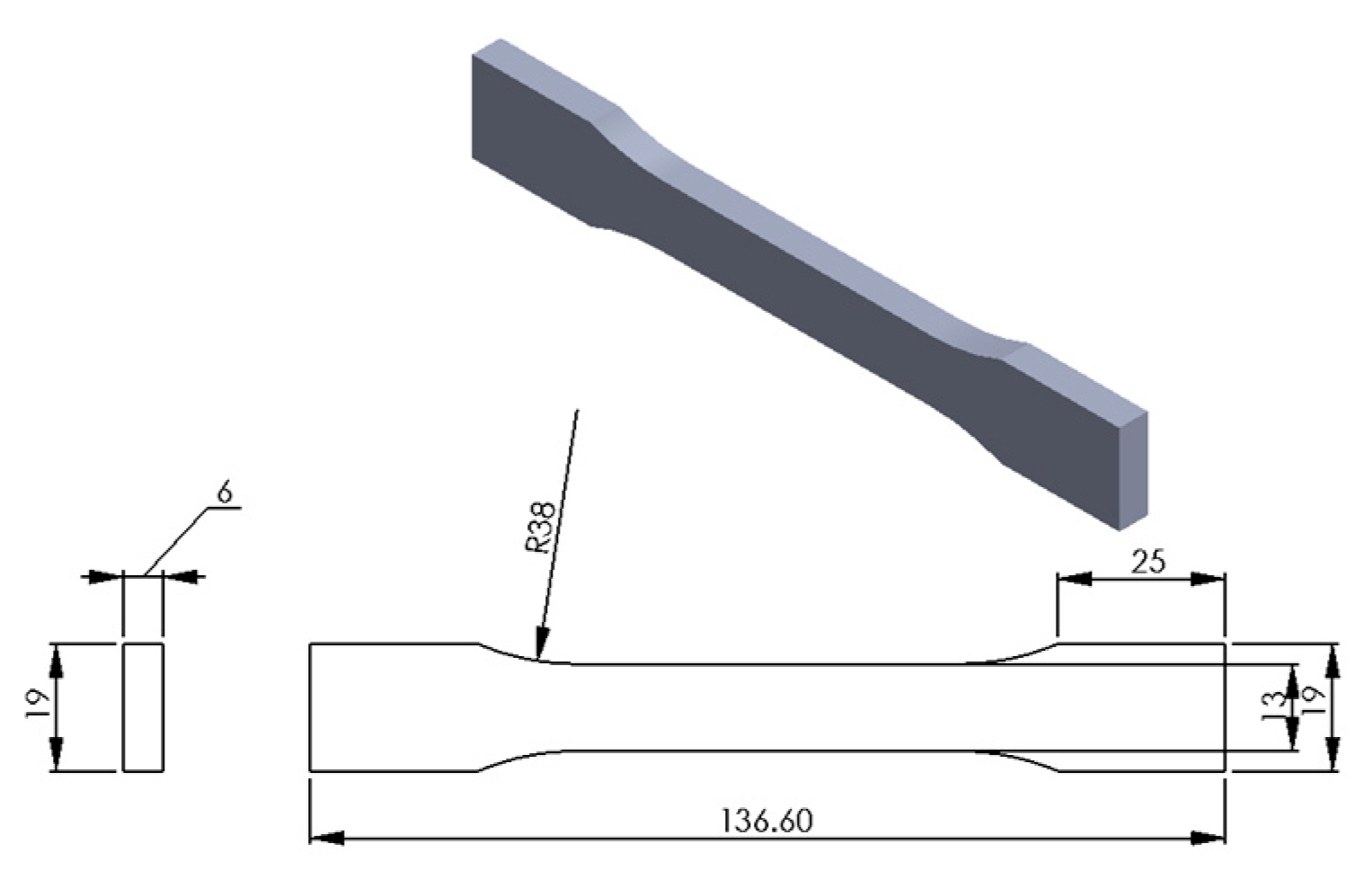 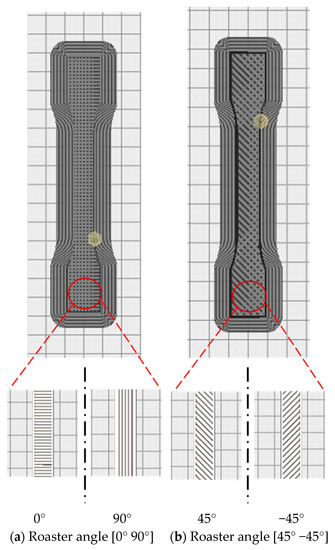 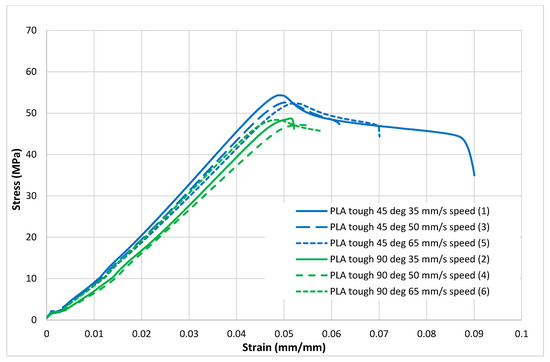 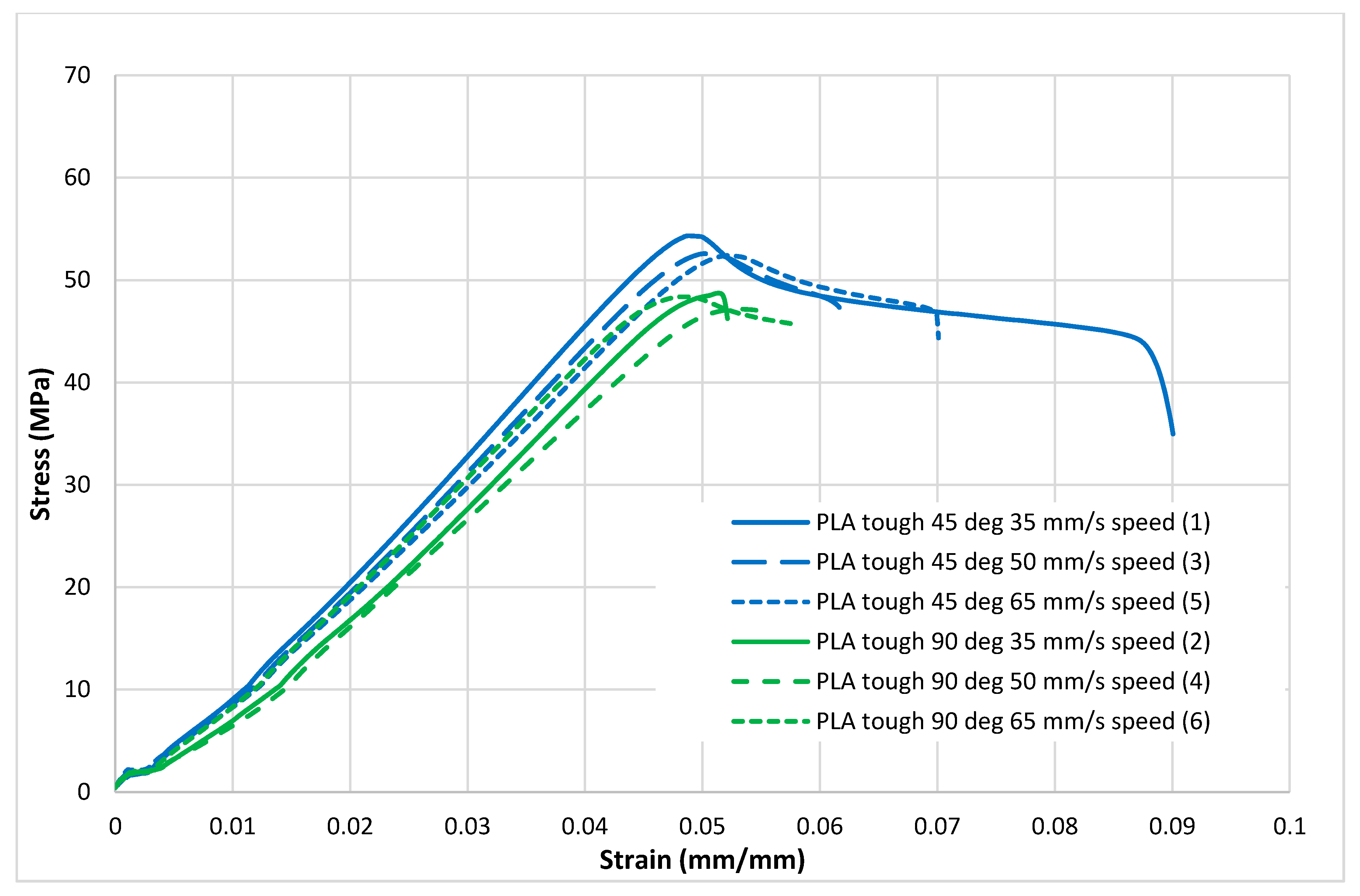 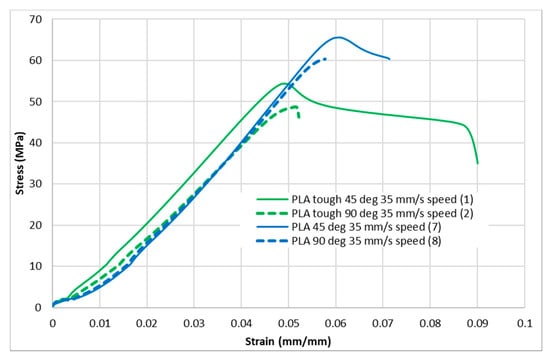 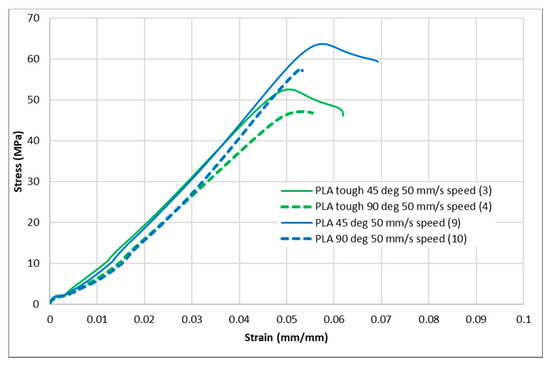 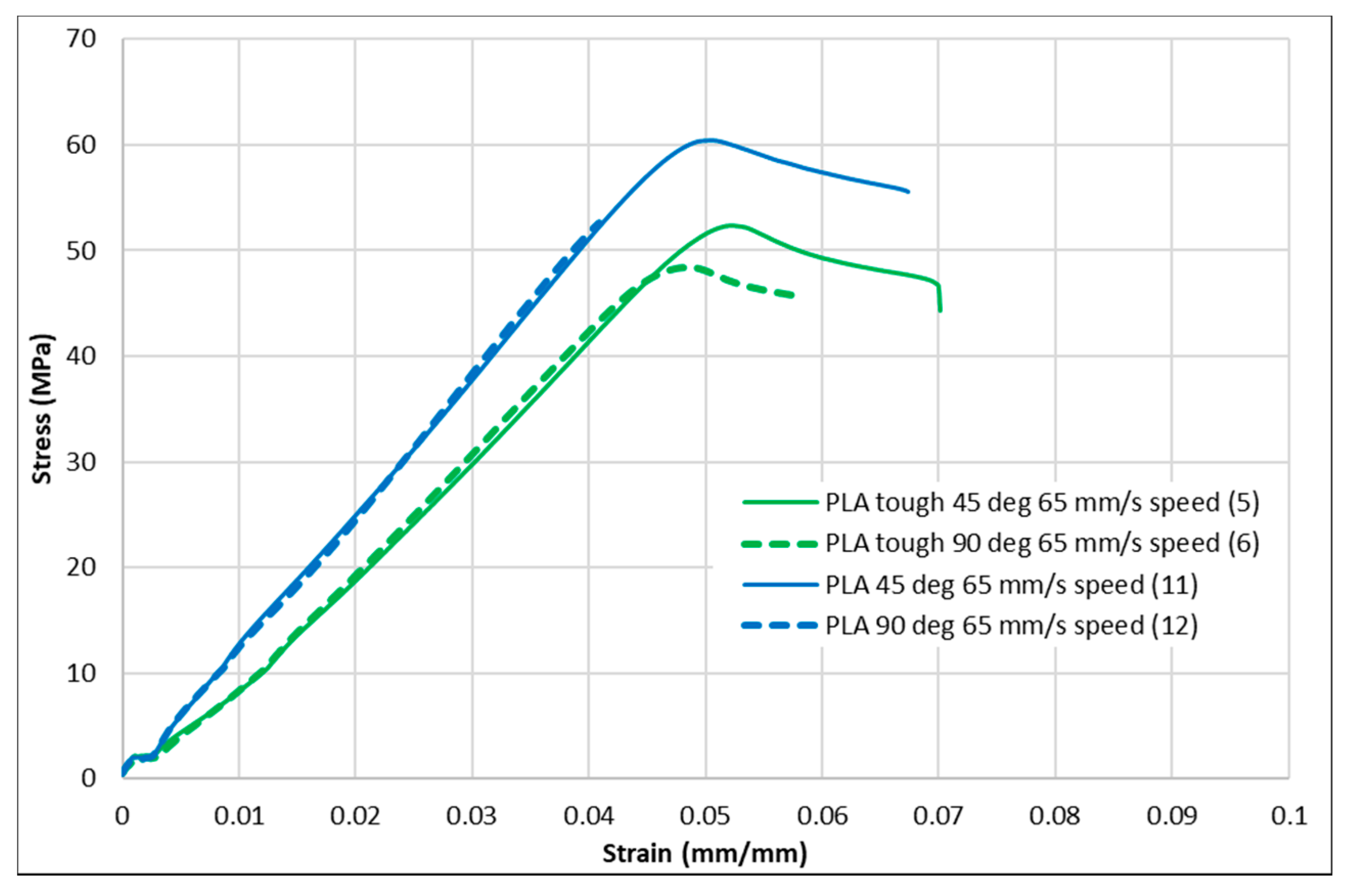 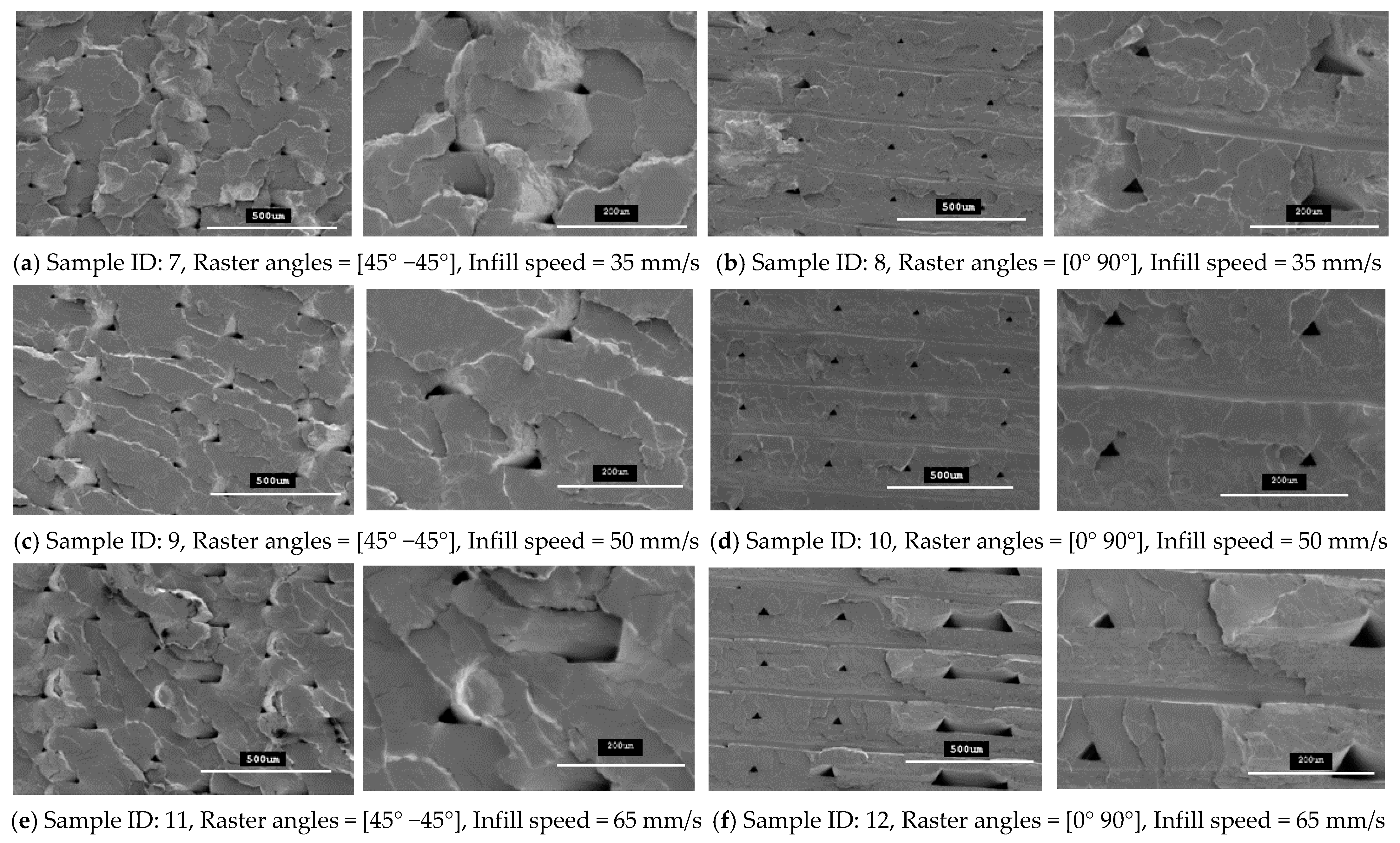