Enhancing Lignin Dissolution and Extraction: The Effect of Surfactants
Previous Article in Journal

In our previous study, an innovative method for sterilization, inertization, and valorization of the organic fraction of municipal solid waste (OFMSW), to be recycled in the production of composite panels, was developed. In this follow-up work, the effects of fire retardants on fire performance, durability, and the mechanical properties of the composite panels based on OFMSW and melamine-formaldehyde resin were investigated. The performance of panels without fire retardants (control panels) was compared to panels containing either mono-ammonium phosphate (PFR) or aluminium trihydrate (ATH) at a mass fraction of 1% and 10% (modified panels). As shown by cone calorimetry, the total heat released was already low (about 31 MJ/m2 at 50 kW/m2) in the control panels, further decreased in the modified panels with the addition of fire retardants, and reached the lowest value (about 1.4 MJ/m2) with 10% mass fraction of PFR. Hence, the addition of fire retardants had a beneficial effect on the response to fire of the panels; however, it also reduced the mechanical properties of the panels as measured by flexural tests. The deterioration of the mechanical properties was particularly obvious in panels containing 10% mass fraction of fire retardants, and they were further degraded by artificial accelerated weathering, carried out by boiling tests. Ultimately, the panels containing PFR at a mass fraction of 1% offered the best balance of fire resistance, durability, and mechanical performance within the formulations investigated in this study. View Full-Text
Keywords: solid urban waste; melamine-formaldehyde; valorization process; fire retardant; durability solid urban waste; melamine-formaldehyde; valorization process; fire retardant; durability
►▼ Show Figures 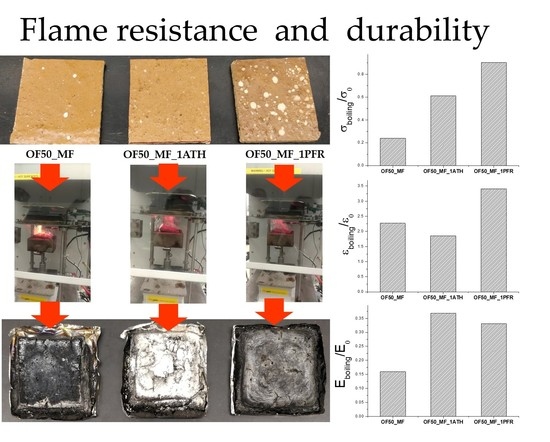