Combination of Sorbitol and Glycerol, as Plasticizers, and Oxidized Starch Improves the Physicochemical Characteristics of Films for Food Preservation
Next Article in Special Issue

This article aimed to study the effects of chitosan fiber and a newly modifying agent, based on organosolv lignin, on mechanical and thermal performances and the enzymatic degradation of PLA/chitosan biocomposites. A newly modifying agent based on polyacrylic acid-grafted organosolv lignin (PAA-g-OSL) was synthesized via free radical copolymerization using t-butyl peroxide as the initiator. The biocomposites were prepared using an internal mixer and the hot-pressed method at various fiber loadings. The results demonstrate that the addition of chitosan fiber into PLA biocomposites remarkably decreases tensile strength and elongation at break. However, it improves the Young’s modulus. The modified biocomposites clearly demonstrat an improvement in tensile strength by approximately 20%, with respect to the unmodified ones, upon the presence of PAA-g-OSL. Moreover, the thermal stability of the modified biocomposites was enhanced significantly, indicating the effectiveness of the thermal protective barrier of the lignin’s aromatic structure belonging to the modifying agent during pyrolysis. In addition, a slower biodegradation rate was exhibited by the modified biocomposites, relative to the unmodified ones, that confirms the positive effects of their improved interfacial interaction, resulting in a decreased area that was degraded through enzyme hydrolysis. View Full-Text
Keywords: polylactic acid; chitosan; organosolv lignin; modifying agent; biocomposites polylactic acid; chitosan; organosolv lignin; modifying agent; biocomposites
►▼ Show Figures 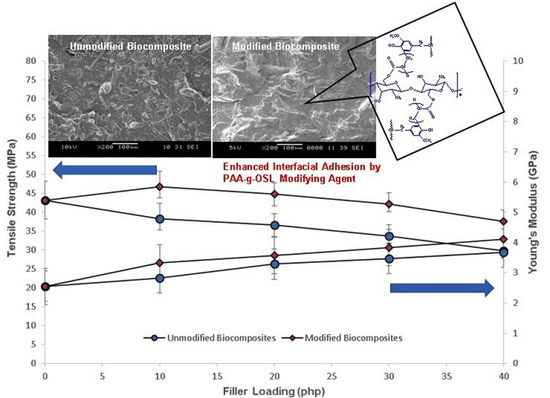