All chemicals and reagents for the synthesis of TiO NPs i.e., titanium tetraisopropoxide (TTIP), ethylene glycol (EG) and for photodegradation study i.e., MB dye were received from Sigma-Aldrich (Prague, Czech Republic) and used without any further purification. The experimental design with different amount of TTIP and EG is presented in Table 1.

Initially, TTIP and EG were added in a beaker containing 50 mL ethanol. The molar ratio of TTIP: EG was 2:1. The mixture was magnetically stirred at 500 rpm for 15 min. The mixture was then sonicated by ultrasonic probe (Bandelin Sonopuls HD 3200, 20 kHZ, 200 W, Berlin, Germany) for time intervals based on the experimental design. The temperature was maintained at 80 C by using hot plate equipped with magnetic stirrer. The resulting nanoparticles were washed with ethanol to remove impurities and then centrifuged at 4000 rpm for 5 min to remove liquid from inside. The resulting nanoparticles were further dried in an oven at 100 C for 2 h. The experimental setup is shown in Figure 1.

The photocatalytic activity of TiO NPs was evaluated by the discoloration of MB solution under UV light. In this experiment, 1 g L TiO NPs were mixed in 50 mL solution containing 100 mg L MB dye. The solution was stirred by a magnetic stirrer and placed in the dark for 40 min to reach an adsorption desorption equilibrium. The UV light source was a 500 W UV lamp with light intensity 30 W m. MB residual concentration was calculated by spectrophotometer at 668 nm wavelength. The color removal efficiency (CR%) was evaluated by the given Equation (1): where and C represents the initial and final concentration of MB in the solution respectively. The initial spectrum of dye solution without TiO NPs was taken as standard sample. An aliquot was taken out by a syringe after a fix time interval to evaluate the results of MB removal.

ANN model is widely used in the prediction of functional properties of composite structures [38,40]. Generally, ANN model contains three layers and ANN model with more than hidden layers is known as DNN model [18]. DNN is widely used to investigate the correlation between variables for critical problems [41]. Automatic creation and exploration of information from previous learning is an interesting feature of DNN [42]. DNN tunes the weights constantly until predicted and target values match. Back-propagation calculates the error between predicted and targeted and update weights to remove error after iterations [18,22]. The equation of DNN is given below: where, y represents the output. represents the ith input variables. represents the weight and is the bias. The weights and biases include the information that neuron recovers during training. is the activation function mostly employed sigmoid activation function given in Equation (3) [43]: where denotes the sigmoid function steepness parameter and x is given by
A detail tutorial of DNN algorithms are presented by various researchers in their studies [44,45]. In the present work, the DNN model has been developed by a multi-layer feed-forward network. The hyperbolic tangent sigmoid function is used as the activation function for each layer. The amount of titanium precursor, amount of ehylene glycol and process time are taken as the input variables whereas the MB removal are outputs variable as described in Figure 2.
The DNN model has been trained by the Bayesian regularization backpropagation algorithm. of the data was used for the training of the DNN model and of the data was used for testing. After several tentative simulation, it was found that the best DNN architecture that gives the lowest relative error and highest correlation coefficient has a structure of 3-12-12-6-1, which represents three variables in the input layer, three hidden layers with 12, 12 and 6 neurons respectively, and one predicted output.

The performance and accuracy of the DNN model was evaluated using different method including mean absolute error (MAE), mean squared error (MSE), root mean squared error (RMSE), standard deviation (SD) of the error and coefficient of correlation (), and they are expressed respectively as follows: where and are the actual and predicted outputs, respectively. is the mean of the actual variables and represents the mean of the predicted variables. n is the number of samples.
In addition, statistical analysis (ANOVA) has been performed to test the statistical significance of input and output variables [38,46,47].

The results of SEM analysis for the synthesis of TiO NPs are presented in Figure 3. It is observed from SEM results that the synthesized TiO NPs are quasi spherical in shape and homogeneously distributed. The estimated size of the particles by image analysis was 20 nm. Moreover, for texture properties, the randomly selected samples were examined by Brunauer-Emmett Teller (BET surface area and pore size analyzer Quantachrome—NOVA 2200e (Boynton Beach, FL, USA)), Atomic Force Microscopy (AFM) system (Park System, Suwon, South Korea) and Dynamic Light Scattering (DLS Malvern Pananalytical Zetasizer Ultra (Malvern, UK)) techniques and the obtained results are presented in Table 2.
In addition, XRD analysis was carried out to confirm the crystallite size and the purity of the crystalline phase. XRD results are illustrated and discussed (see the Supporting Information).

MB discoloration was investigated with 1 g L TiO NPs and with 100 mg L initial concentration of MB. The results of MB removal explain that a complete discoloration of MB was done within 40 min under UV light. In order to confirm that this change was due to the presence of TiO NPs and not by the poor light fastness of MB, dye solution was exposed to UV light without TiO NPs. This solution didn’t change its color even for longer irradiations time. Therefore, it is confirmed that TiO NPs are highly photo active as their minimal quantity discolor MB solution in a short span of time.

3.3. Analysis of the Proposed DNN Model

We applied the DNN to predict the removal of methylene blue dye under the influence of titanium dioxide. After many trials, the best results that include the lower MSE and high prediction performance of the methylene blue removal obtained from a DNN model with five-layers, i.e., an input, three hidden, and an output layers, and the number of hidden layer nodes are 12, 12 and 6, where the network provides highly accurate results. The transfer functions used for hidden and output layers in this work is the type of tangent sigmoid (tansig) function. The best selection of a transfer function for input and output layers guarantee the accuracy of the predicted results. In addition, Bayesian regularization backpropagation was used to train the DNN. The setting of training parameters of the DNN are presented in Table 3. The obtained results with the DNN model were compared with MLR.
Figure 4 illustrates the predicted values of MB dye removal using DNN and MLR. Figure 5 shows the absolute prediction error given by the difference between predicted and actual values using both MLR and DNN. We noticed that the values of prediction error were significantly lower for the DNN model as compared to MLR. It is clear from the Figure 5 that MLR model has one error burst at sample number 4 and has higher errors for the prediction of most values. Table 4 represents the computed , , , and for both used models to predict the methylene blue removal. We observed that the proposed DNN model outperformed MLR with lower errors according to , , , , and high accuracy according to .
The correlation between actual and predicted values using DNN for training and validation of all data sets is illustrated in Figure 6. It is observed from the results that the correlation coefficients (R-value) provide an excellent correlation between the predicted and actual values, where which confirm the highly prediction accuracy of DNN. Figure 7 showed the correlation between the actual and predicted values using MLR model. We noticed that MLR model provide a good prediction accuracy for the MB removal, where . It is clear from the obtained results that both DNN and models verifies their accuracy and effectiveness in the prediction process. However, the performance of DNN model outperformed MLR with higher accuracy and lower errors.
One-way ANOVA was used to check the robustness of the results obtained through DNN, MLR and experiments. ANOVA analysis helps to understand the relationship between predicted values of MB dye removal under the influence of nano TiO with all process variables. Table 5 shows ANOVA results for MB dye removal obtained by DNN, MLR and experiments. The overall results show that DNN model is statistically more significant than experimental values and MLR values as DNN provides lowest p-value.

This work was supported by the Ministry of Education, Youth and Sports of the Czech Republic and the European Union (European Structural and Investment Funds—Operational Programme Research, Development and Education) in the frames of the project “Modular platform for autonomous chassis of specialized electric vehicles for freight and equipment transportation”, Reg. No. CZ.02.1.01/0.0/0.0/16025/0007293. 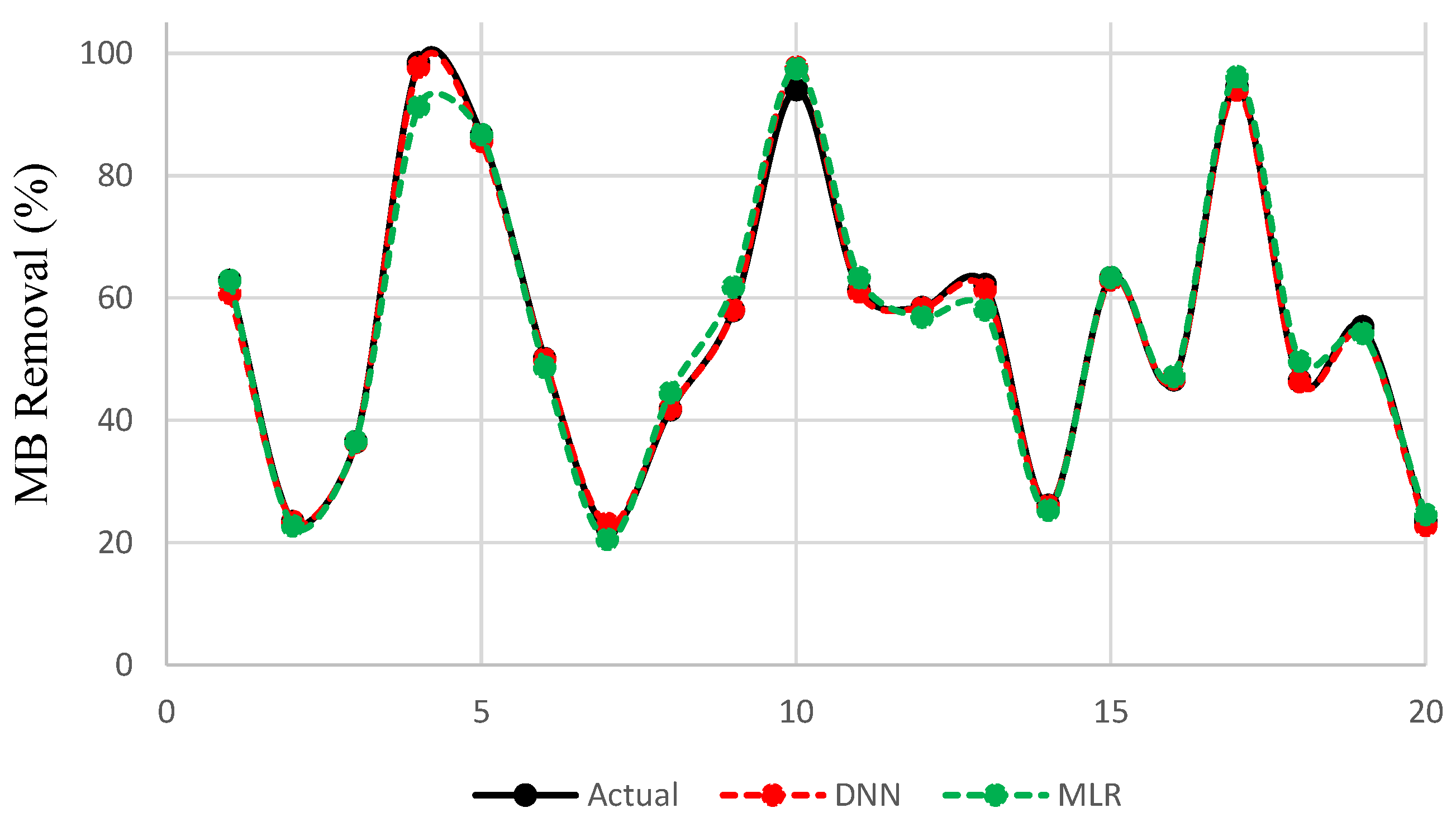