Hydrogels based on biopolymers, such as alginate, are commonly used as scaffolds in tissue engineering applications as they mimic the features of the native extracellular matrix (ECM). However, in their native state, they suffer from drawbacks including poor mechanical performance and a lack of biological functionalities. Herein, we have exploited a crystallization-driven self-assembly (CDSA) methodology to prepare well-defined one-dimensional micellar structures with controlled lengths to act as a mimic of fibrillar collagen in native ECM and improve the mechanical strength of alginate-based hydrogels. Poly(ε-caprolactone)-b-poly(methyl methacrylate)-b-poly(N, N-dimethyl acrylamide) triblock copolymers were self-assembled into 1D cylindrical micelles with precise lengths using CDSA epitaxial growth and subsequently combined with calcium alginate hydrogel networks to obtain nanocomposites. Rheological characterization determined that the inclusion of the cylindrical structures within the hydrogel network increased the strength of the hydrogel under shear. Furthermore, the strain at flow point of the alginate-based hydrogel was found to increase with nanoparticle content, reaching an improvement of 37% when loaded with 500 nm cylindrical micelles. Overall, this study has demonstrated that one-dimensional cylindrical nanoparticles with controlled lengths formed through CDSA are promising fibrillar collagen mimics to build ECM scaffold models, allowing exploration of the relationship between collagen fiber size and matrix mechanical properties. View Full-Text
Keywords: crystallization-driven self-assembly; calcium alginate hydrogel; cylindrical micelles crystallization-driven self-assembly; calcium alginate hydrogel; cylindrical micelles
►▼ Show Figures 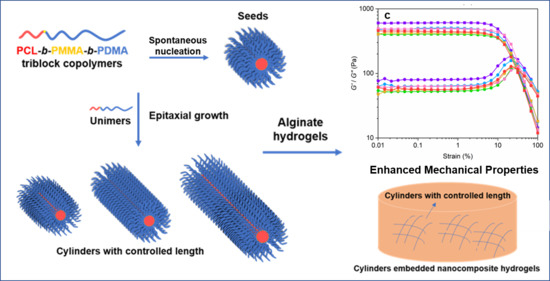