Bark Thermal Insulation Panels: An Explorative Study on the Effects of Bark Species

Tree bark is a byproduct of the timber industry which accrues in large amounts, because approximately 10% of the volume a log is bark. Bark is used primarily for low-value applications such as fuel or as a soil covering material in agriculture. Within the present study, thermal insulation panels made from larch, pine, spruce, fir and oak tree bark with different resins (urea formaldehyde, melamine formaldehyde, Quebracho, Mimosa) as a binder are discussed. Also, the properties of panels made from larch bark mixed with industrial popcorn are investigated. The physical-mechanical properties of the panels, which are dependent on panel density, bark species, resin type, resin content and particle size, are analyzed. The bark species has a minor effect on the mechanical characteristics of the panels, while the compression ratio is important for the panel strength, and hence, barks with lower bulk density are preferable. Under laboratory conditions, panels made with green tannin resins proved to have adequate properties for practical use. The addition of popcorn is a means to lower the panel density, but the water absorption of such panels is comparably high. The bark type has a minor effect on the thermal conductivity of the panels; rather, this parameter is predominantly affected by the panel density. View Full-Text
Keywords: tree bark; thermal insulation panels; thermal conductivity; green building materials tree bark; thermal insulation panels; thermal conductivity; green building materials
►▼ Show Figures 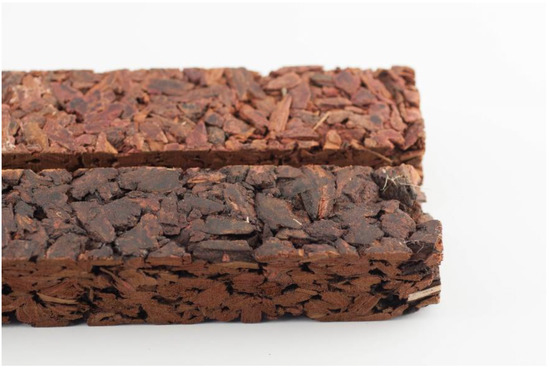