In this work, yerba mate nanoparticles (YMNs) were extracted from Ilex paraguairiencis yerba mate wastes and further used to improve the overall performance of mechanically recycled PLA (PLAR). Recycled PLA was obtained by melt reprocessing PLA subjected to an accelerated ageing process, which involved photochemical, thermal and hydrothermal ageing steps, as well as a final demanding washing step. YMNs (1 and 3 wt. %) were added to the PLAR during the melt reprocessing step and further processed into films. The main goal of the development of PLAR-YMNs bionanocomposites was to increase the barrier properties of recycled PLA, while showing good overall performance for food packaging applications. Thus, optical, structural, thermal, mechanical and barrier properties were evaluated. The incorporation of YMNs led to transparent greenish PLAR-based films with an effective blockage of harmful UV radiation. From the backbone FTIR stretching region (bands at 955 and 920 cm−1), it seems that YMNs favor the formation of crystalline domains acting as nucleating agents for PLAR. The morphological investigations revealed the good dispersion of YMNs in PLAR when they are used in the lowest amount of 1 wt. %, leading to bionanocomposites with improved mechanical performance. Although the addition of high hydrophilic YMNs increased the water vapor transmission, the addition of 1 wt. % of YMNs enhanced the oxygen barrier performance of the produced bionanocomposite films. These results show that the synergistic revalorization of post-consumer PLA and nanoparticles obtained from agri-food waste is a potential way for the production of promising packaging materials that meet with the principles of the circular economy. View Full-Text
Keywords: poly(lactic acid); mechanical recycling; yerba mate; bionanocomposites poly(lactic acid); mechanical recycling; yerba mate; bionanocomposites
►▼ Show Figures 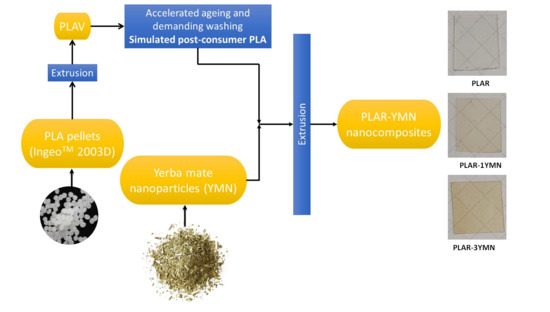