Cucurbits are plants that have been used frequently as functional foods. This study includes the extraction, isolation, and characterisation of the mesocarp polysaccharide of Cucurbita moschata. The polysaccharide component was purified by gel filtration into three fractions (NJBTF1, NJBTF2, and NJBTF3) of different molecular weights. Characterisation includes the hydrodynamic properties, identification of monosaccharide composition, and bioactivity. Sedimentation velocity also indicated the presence of small amounts of additional discrete higher molecular weight components even after fractionation. Sedimentation equilibrium revealed respective weight average molecular weights of 90, 31, and 19 kDa, with the higher fractions (NJBTF1 and NJBTF2) indicating a tendency to self-associate. Based on the limited amount of data (combinations of 3 sets of viscosity and sedimentation data corresponding to the 3 fractions), HYDFIT indicates an extended, semi-flexible coil conformation. Of all the fractions obtained, NJBTF1 showed the highest bioactivity. All fractions contained galacturonic acid and variable amounts of neutral sugars. To probe further, the extent of glycosidic linkages in NJBTF1 was estimated using gas chromatography–mass spectrometry (GCMS), yielding a high galacturonic acid content (for pectin polysaccharide) and the presence of fructans—the first evidence of fructans (levan) in the mesocarp. Our understanding of the size and structural flexibility together with the high bioactivity suggests that the polysaccharide obtained from C. moschata has the potential to be developed into a therapeutic agent. View Full-Text
Keywords: Cucurbita moschata; GCMS; levan; pectin; bioactivity; hydrodynamics Cucurbita moschata; GCMS; levan; pectin; bioactivity; hydrodynamics
►▼ Show Figures 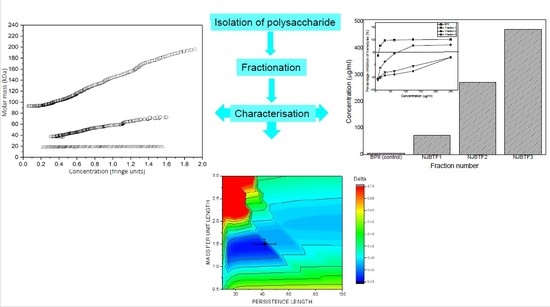