The presented study describes the application of lignin-based dual component fillers into low-density polyethylene (LDPE) and an examination of their selected properties. The main experimental procedure was focused on the preparation of thin sheet films using polyethylene and its composites with 5% by wt. of fillers: MgO, MgO-lignin dual phase systems with varying amounts of lignin and pristine lignin. Analysis of morphology revealed that elongated voids appeared in the structure for hybrid filler with a higher content of lignin (min. 50% by wt. of lignin versus MgO) and also for pristine lignin. Moreover, the prepared sheets were subjected to the thermoforming process by using the positive forming method (male mold). The thermoforming ability of all composites was evaluated by means of a comparison of wall thickness distribution on thermoformed shapes. The most noticeable percentage of wall thinning occurred for films which consisted of LDPE/MgO-lignin (5:1 wt./wt.) composite. In contrast, the best material arrangement and the highest mean percentage wall thickness were observed in the case of the shape formed with LDPE/MgO-lignin (1:5 wt./wt.). In addition, as part of research studies, the measurements of the contact angle have been conducted. The analysed LDPE films, in particular LDPE/MgO-L, have been recognized as materials with high wettability.
Keywords: MgO-lignin hybrid filler; low-density polyethylene; thermoforming process; microstructure properties; wettability MgO-lignin hybrid filler; low-density polyethylene; thermoforming process; microstructure properties; wettability
►▼ Show Figures 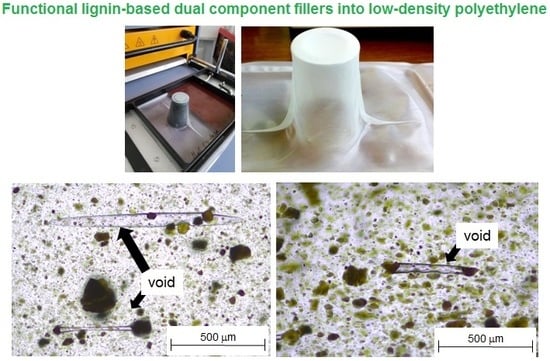