We demonstrate that using nanocomposite thin films consisting of semiconducting polymer, poly(3-hexylthiophene) (P3HT), and electrochemically exfoliated graphene (EEG) for the active channel layer of organic field-effect transistors (OFETs) improves both device performances and mechanical properties. The nanocomposite film was developed by directly blending P3HT solution with a dispersion of EEG at various weight proportions and simply transferring to an Si/SiO2 substrate by the solution floating method. The OFET based on P3HT/EEG nanocomposite film showed approximately twice higher field-effect mobility of 0.0391 cm2·V−1·s−1 and one order of magnitude greater on/off ratio of ~104 compared with the OFET based on pristine P3HT. We also measured the mechanical properties of P3HT/EEG nanocomposite film via film-on-elastomer methods, which confirms that the P3HT/EEG nanocomposite film exhibited approximately 2.4 times higher modulus (3.29 GPa) than that of the P3HT film (1.38 GPa), while maintaining the good bending flexibility and durability over 10.0% of bending strain and bending cycles (1000 cycles). It was proved that the polymer hybridization technique, which involves adding EEG to a conjugated polymer, is a powerful route for enhancing both device performances and mechanical properties while maintaining the flexible characteristics of OFET devices. View Full-Text
Keywords: organic field-effect transistor; nanocomposites; electrochemically exfoliated graphene; solution floating method; film-on-elastomer organic field-effect transistor; nanocomposites; electrochemically exfoliated graphene; solution floating method; film-on-elastomer
►▼ Show Figures 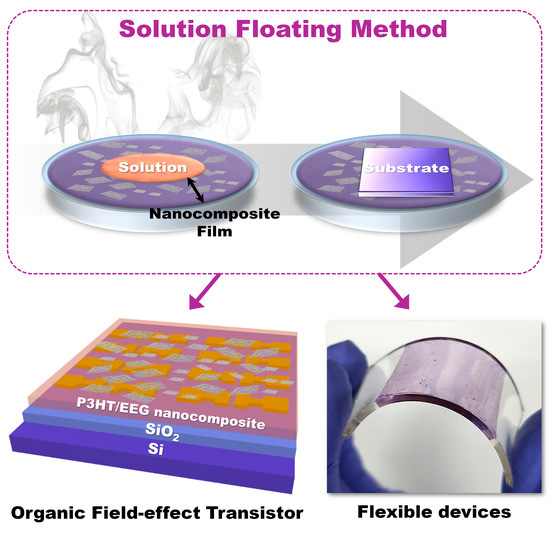