The paper presents the course of synthesis and properties of a series of block copolymers intended for biomedical applications, mainly as a material for forming scaffolds for tissue engineering. These materials were obtained in the polymerization of l-lactide and copolymerization of l-lactide with glycolide carried out using a number of macroinitiators previously obtained in the reaction of polytransesterification of succinic diester, citric triester and 1,4-butanediol. NMR, FTIR and DSC were used to characterize the materials obtained; wettability and surface free energy were assessed too. Moreover, biological tests, i.e., viability and metabolic activity of MG-63 osteoblast-like cells in contact with synthesized polymers were performed. Properties of obtained block copolymers were controlled by the composition of the polymerization mixture and by the composition of the macroinitiator. The copolymers contained active side hydroxyl groups derived from citrate units present in the polymer chain. During the polymerization of l-lactide in the presence of polyesters with butylene citrate units in the chain, obtained products of the reaction held a fraction of highly branched copolymers with ultrahigh molecular weight. The reason for this observed phenomenon was strong intermolecular transesterification directed to lactidyl side chains, formed as a result of chain growth on hydroxyl groups related to the quaternary carbons of the citrate units. Based on the physicochemical properties and results of biological tests it was found that the most promising materials for scaffolds formation were poly(l-lactide–co–glycolide)–block–poly(butylene succinate–co–butylene citrate)s, especially those copolymers containing more than 60 mol % of lactidyl units. View Full-Text
Keywords: biodegradable polyester; block copolymer; succinic acid; citric acid; l-lactide; ROP; polycondensation; scaffold biodegradable polyester; block copolymer; succinic acid; citric acid; l-lactide; ROP; polycondensation; scaffold
►▼ Show Figures 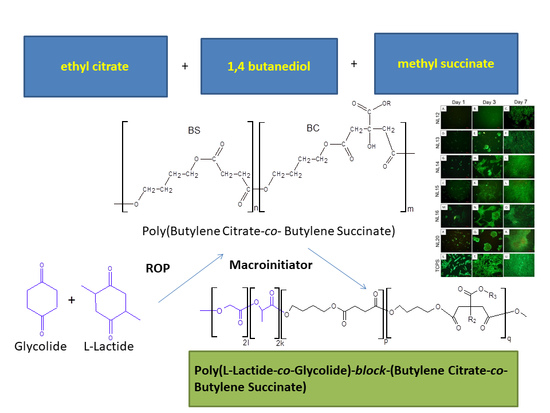