Plasticization of Polylactide with Myrcene and Limonene as Bio-Based Plasticizers: Conventional vs. Reactive Extrusion

Interfacial interaction is one of the most important factors that affect the mechanical properties of the fiber reinforced composites. The effect of fabrics′ sizing removal from glass fibers’ surface by thermal treatment on the mechanical characteristics of polyethersulfone based composites at different fiber to polymer weight ratios was investigated. Three fiber to polymer weight ratios of 50/50, 60/40, and 70/30 were studied. Flexural and shear tests were carried out to illustrate the mechanical properties of the composites; the structure was studied using Fourier-transform infrared spectroscopy and scanning electron microscopy. It was shown that solution impregnation of glass fabrics with polyethersulfone before compression molding allows to achieve good mechanical properties of composites. The thermal treatment of glass fabrics before impregnation results in an increase in flexural and shear strength for all the composites due to the improvement of fiber–matrix interaction.
Keywords: glass fibers; surface modification; polyethersulfone; impregnation glass fibers; surface modification; polyethersulfone; impregnation

Growing attention has been given to the improvement of polymeric composite properties, especially in regards to their high strength-to-weight ratio [1,2,3]. Polyethersulfone (PES) is a superior performance engineering plastic with a high glass transition temperature Tg of 225 °C and operating temperature up to 180 °C. Due to several advantages such as high toughness; ease to produce and form complex shapes; good tribological properties; high modulus and strength; perfect fatigue resistance and dimensional stability; as well as rich fire, chemical and radiation resistance; PES is exceedingly eligible as a high-temperature tribo-material to substitute metals or ceramics [4]. Nevertheless, the tribological and mechanical properties of PES have to be evolved to gain the requirements necessary for several sophisticated applications, such as aerospace, automotive, and microelectronics [5].
Since enhancing the mechanical properties of polymer composites is the major task, glass fibers (GF) are widely used as reinforcing material [4]. GF supply beneficial adhesion to the polymer matrix, perfect aesthetic quality, and revised strength of the resulting composites [6]. Because GF possess high mechanical properties, low weight ratios, suitable heat resistance, and have a very cheap cost, they are attractive as reinforcers for polymers [7]. Thermoplastic composites reinforced with glass fibers were paid great attention because of their wide applications in automotive, aerospace, and many engineering applications [8]. Several studies have been carried out to investigate the mechanical properties of thermoplastics reinforced with glass fibers [9,10,11,12,13,14,15,16,17,18,19,20]. It was found that the properties of the composites are affected by the fibers’ geometry, orientation, concentration, and by the nature of the fibers [13,15,16,17,21,22] in addition to the interfacial adhesion between the fiber and polymer [23,24,25], which plays a crucial role in the composites’ strength.
The interfacial adhesion is affected both by the raw fibers’ surface coating (sizing) and by any GF surface treatment or modification [26,27,28,29,30,31,32,33]. Sizing prevents the damage of fibers after producing, makes their use in manufacturing easier, protects fibers from the environmental impact [28], and enhances the composites’ properties in the case of using sizing compatible with the matrix material [28,34]. Sizing could be provided by various materials, such as silanes, epoxies, paraffin and other coupling agents; and it could be one or more from these materials, but the actual and accurate sizing formula remains the secret of manufacturers [28]. However, most of the composites are made from epoxy resin, and most of the commercial sizings are often of the same nature. These sizings have relatively low degradation temperatures (about 250 °C) which are much lower than the processing temperatures of the engineering plastics such as PES. This would inevitably cause the problem of the sizing being degraded under high processing temperature, leading to weakened interfacial adhesion. A lot of methods (electrochemical, chemical, thermal, grafting, coating, and discharge plasma treatments, etc.) have been elaborated to enhance the interfacial adhesion between GF and polymers [35,36,37]. In the present work, we investigate the effect of formation route in addition to fabrics’ sizing removal from GF surface on the structure and mechanical properties of PES based composites.

Woven glass fabrics (NPO “Stekloplastic” Russia) (T-23 “260 ± 10 g/m2, 12 + 1 warp, 8 + 1 weft yarn/cm, 0.27 ± 0.03 thickness”) and PES Ultrason E2010 (Basf, Germany) powder were used as raw materials. A solvent of N-Methyl-2-pyrrolidone was used to produce PES solution to provide a good impregnation of fabrics with polymer. Solution formation was carried out with 20/80 polymer to solvent weight ratio for 24 h using a magnetic stirrer. Four routes were used for sample preparation: (1) compression molding of PES powder together with as-received glass fabrics; (2) compression molding of PES powder together with preheated glass fabrics; (3) compression molding of impregnated as-received glass fabrics with PES solution, and (4) compression molding of impregnated preheated glass fabrics with PES solution. The samples of PES solution impregnated glass fabrics were dried at 150 °C for 5 h to remove the solvent before compression molding. The bulk samples were prepared using the compression molding technique as shown in Figure 1. All samples were produced using the compression molding method at 350 °C and pressure of 10 MPa. The fiber to polymer weight ratio was varied as follows: 50/50, 60/40, and 70/30 wt %.
The glass fabrics were preheated using the furnace in air atmosphere at three temperatures (300, 350, and 400 °C) for 1 h and they were used to produce bulk samples which were tested to choose the best-preheated temperature.
Flexural and shear tests were performed to examine the PES-based composites using a Zwick/Roell Z020 universal test machine (Boston, MA, USA) equipped with 1 and 20 kN sensors and a contact strain measurement system MultiXtens. For flexural tests, samples of 110 mm × 10 mm × 2 mm and a span length of 80 mm (according to ISO 14125:1998) were prepared. Samples of 110 mm × 10 mm × 4 mm and a gauge length of 80 mm (according to ASTM D 3846) were prepared for shear tests. The flexural and shear tests were carried out at speeds of 10 and 1.3 mm/min, respectively, at room temperature. At least six samples were tested at each condition.
FTIR spectroscopy of the samples after various treatments were obtained using a Nicolet 380 FT-IR spectrometer (spectral range of 4000–450 cm−1, resolution of 1 cm−1). A scanning electron microscope (VEGA 3 TESCAN) (Brno - Kohoutovice, Czech Republic) in a backscattered electron image mode was used to study the structure of the fracture surface of the composites. The samples were coated with a thin layer (10–15 nm) of carbon in a sputter coater. For the studies the composites′ fracture surface after flexural tests were used.

A new method to improve the mechanical properties of PES composites by preheating the glass fibers to remove the sizing coating was suggested. Firstly, it was found that the method used to produce the samples has a great effect on the properties of the prepared composites. Using the PES in the solution form provides a good impregnation between the fibers and the polymer which improves the interaction between matrix and reinforcement resulting composite with better properties. The influence of the fiber to polymer ratio in addition to the effect of the thermal treatment of the fiber on the mechanical behavior of the composites was investigated. The results show that the flexural strength of the composites significantly increased when using the PES solution to impregnate the GF and preheated glass fabrics as reinforcements. The composites reinforced with as-received glass fabrics showed insufficient interfacial interaction between fibers and polymer, which resulted in lower mechanical properties compared with preheated composites. In the as-received composites 60/60 fiber to polymer ratio showed good results. The results reveal that the mechanical properties increased with increasing the fiber to polymer ratio, and the 70/30 samples were the best composition in case of using the preheated GF. Improvement was noticed in the mechanical properties of the PES-based composites due to the heat treatment of the glass fibers before using, which led to remove most of the sizing coating of fabrics (according to the FTIR of the fibers after preheating) and enhance the adhesion between the fabrics and polymer. According to SEM images, a good interface occurred in the case of using the preheated glass fabrics compared with those in as-received composites.

The reported study was funded by Russian Science Foundation grant No. 18-19-00744.

G.S. gratefully acknowledges the financial support of the Ministry of Science and Higher Education of the Russian Federation in the framework of Increase Competitiveness Program of MISiS (support project for young research engineers). 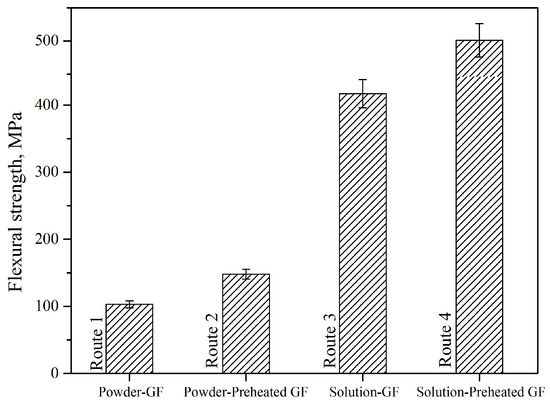 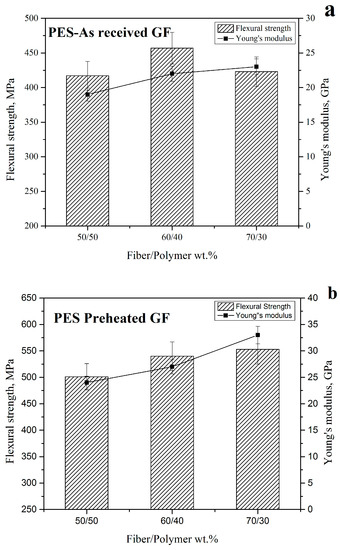 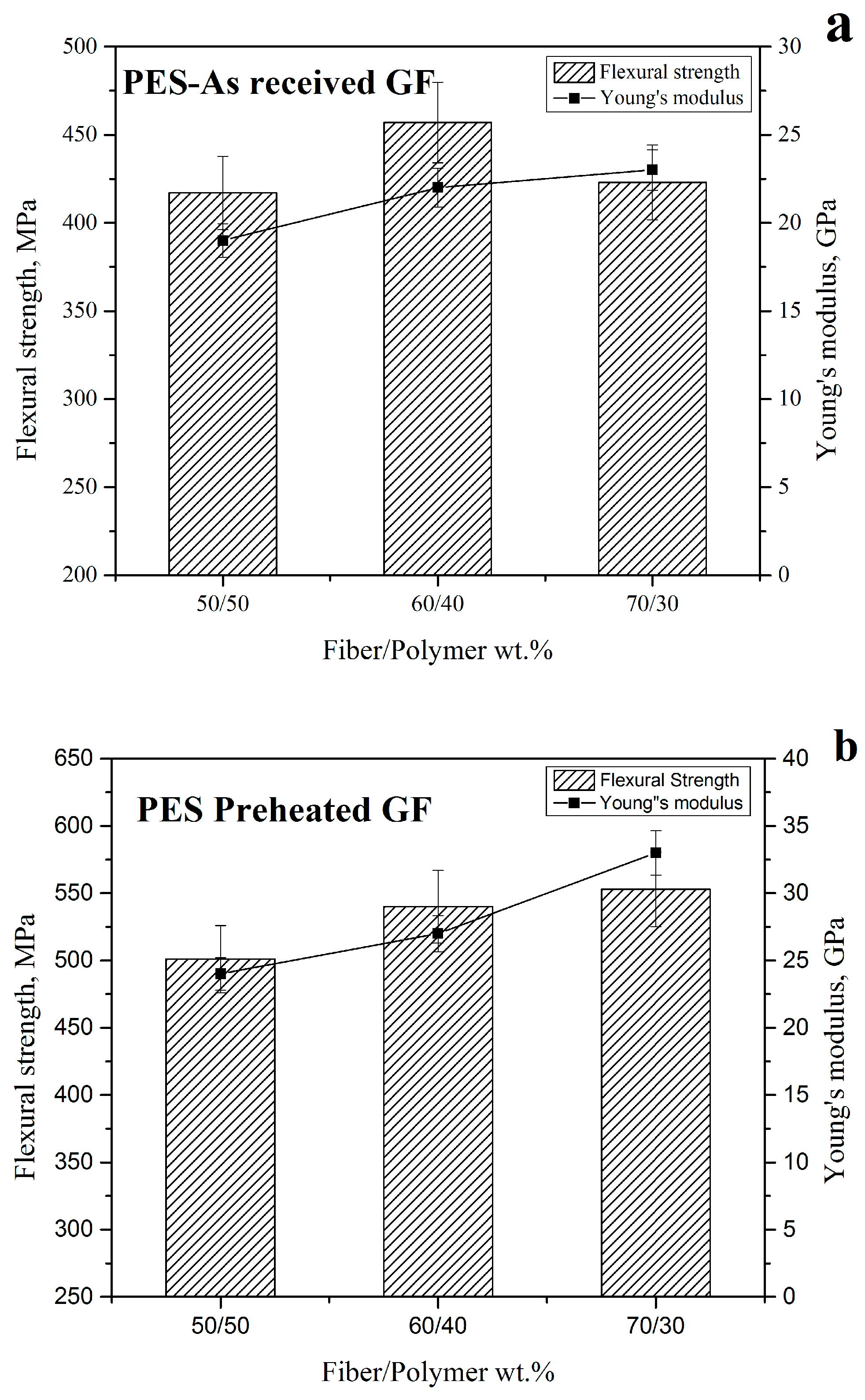 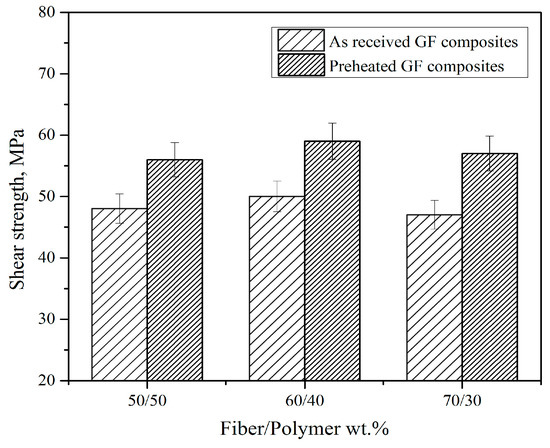 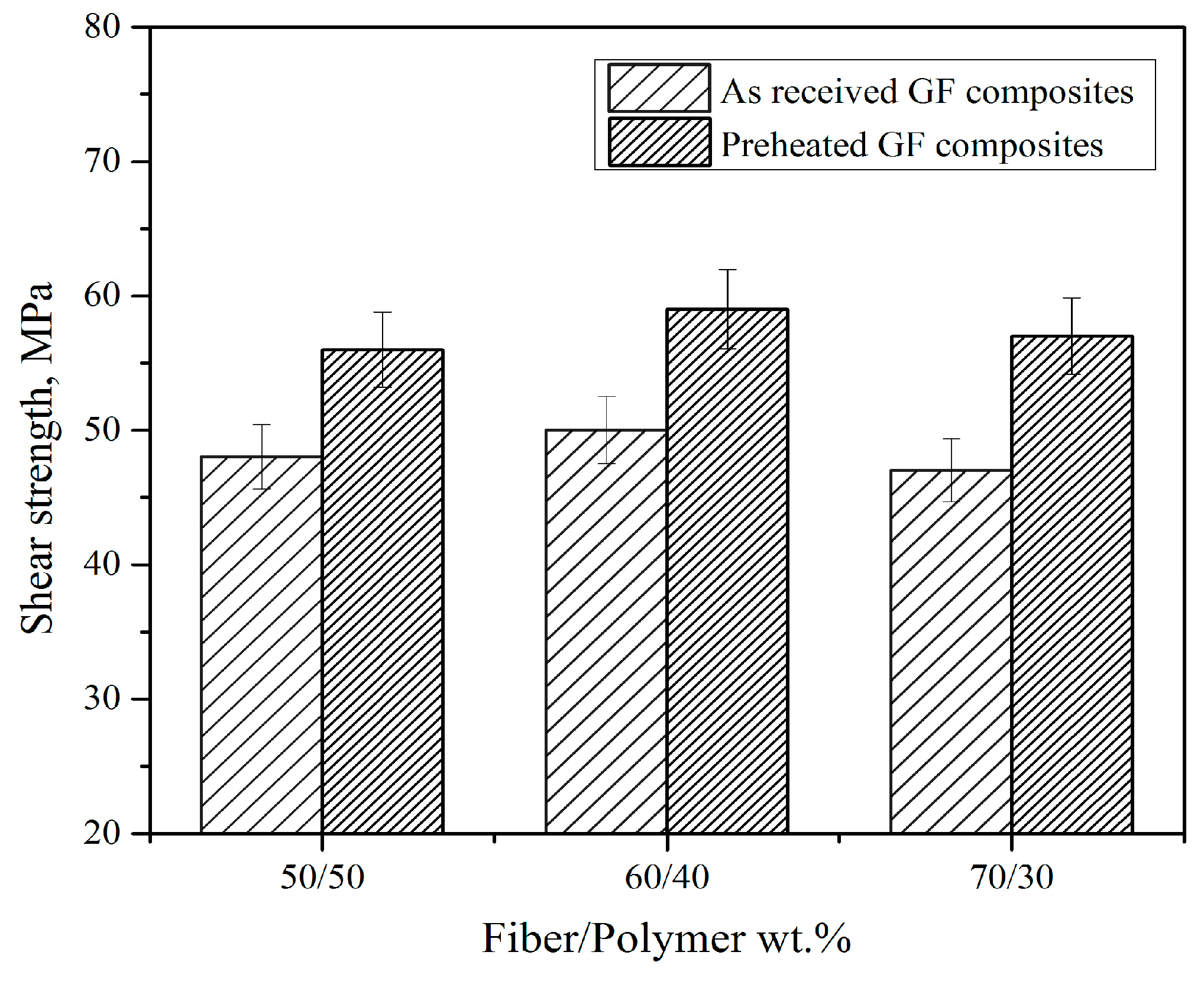 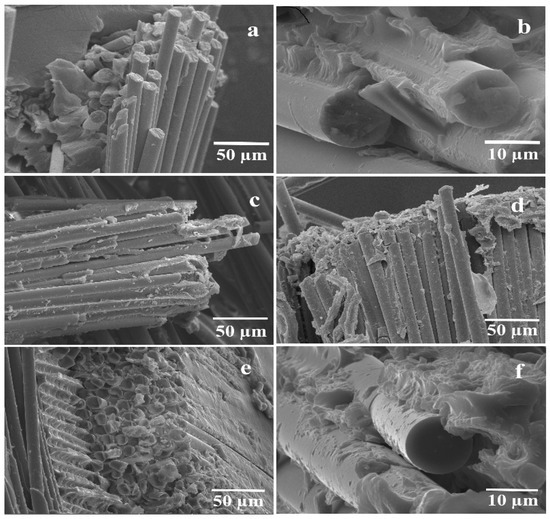 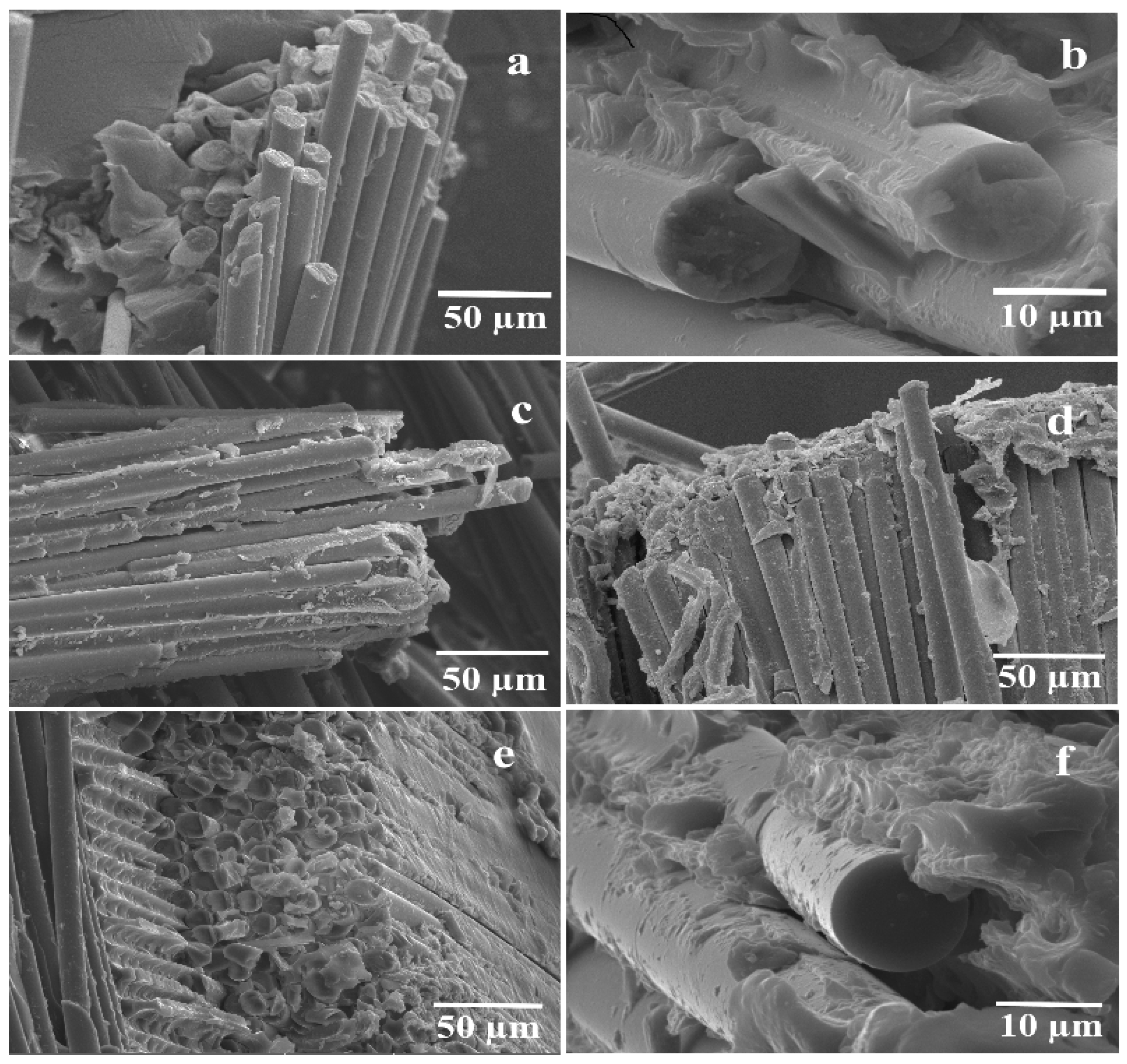