(PVA/Chitosan/Fucoidan)-Ampicillin: A Bioartificial Polymeric Material with Combined Properties in Cell Regeneration and Potential Antibacterial Features
Next Article in Special Issue

Polyamidoamino acids (PAACs) are synthetic polymers prepared by the polyaddition of bisacrylamides with natural α-amino acids, which in the process maintain both their chirality and their amphoteric nature. This polymerization process is slow, but has the merits of taking place in water and of neither involving protection/de-protection steps nor releasing by-products. However, it leads to polydisperse polymers and, using α-amino acids mixtures, random copolymers. This paper presents a step-by-step polyaddition process leading to homo- and copolymeric PAACs with controlled sequences and controlled molecular weights. It exploits the much different rates of the two Michael addition steps of NH2 of α-amino acids with acrylamides, and the low solubility in organic solvents of the α-amino acid addition products. As a proof of principle, the controlled synthesis of the PAAC from l-arginine and N,N′-methylenebisacrylamide was performed up to a monodisperse product with 11 monomeric units and molecular weight 1840. This synthetic procedure was also tested with l-alanine. All intermediates were isolated and characterized. Noticeably, all of them were α,ω-difunctionalized with either acrylamides or sec-amines and were, in fact, building blocks with potential for preparing complex macromolecular architectures. In a first instance, copolymers with controlled sequences of amidoamine- and amidoamino acid units were prepared. View Full-Text
Keywords: controlled stepwise polymerization; regularly sequenced polyamidoamino acids; amidoamino acid building blocks; l-arginine; l-alanine controlled stepwise polymerization; regularly sequenced polyamidoamino acids; amidoamino acid building blocks; l-arginine; l-alanine
►▼ Show Figures 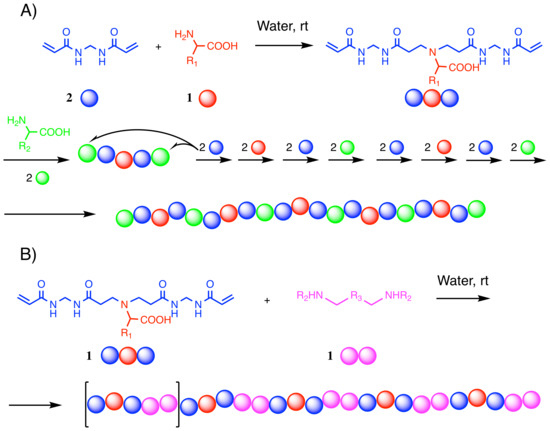