Wound healing is a series of processes that involves the control of inflammation, cell migration and new tissue remodeling [1,2]. It is reported that a material with anti-inflammatory, antimicrobial and antioxidant properties that promotes cell migration can serve as a potential solution for treating skin and soft-tissue wounds [3].
Hyaluronic acid (HA) is a biopolymer found mainly in the extracellular space [4] and joints [5,6]. The primary physiological function of HA is its buffering action, which is due to its excellent viscoelastic properties after water absorption [7]. Thus, traditionally, HA was reportedly used as a medical material for retaining skin moisture and for osteoarthritis therapy [8]. Recently, studies have shown that HA exhibits anti-inflammatory and antibacterial activities [9,10]. In addition, since free radicals can break down hyaluronic acid into smaller fragments in damaged tissues, it also has the antioxidant function of scavenging free radicals. Furthermore, it is well known that HA also can be a scaffold during tissue repair to provide cell climbing and migration opportunities [11]. With these useful functions, HA is reported to accelerate the process of wound healing [10,12,13].
Recently, many studies have investigated the association between the molecular weight of HA and its physiological functions [14,15]. In the initial stage of wound healing, high-molecular-weight HA (HMWHA) (~2000 kDa) accumulates in the extracellular matrix and binds to fibrinogen to form a clot. Thereafter, in the inflammatory stage, HMWHA is broken down into low-molecular-weight hyaluronic acid (LMWHA) (80–800 kDa) by hyaluronidase for subsequent use in healing [16,17,18]. At this stage, LMWHA is reported to participate in the inflammatory response, involving macrophage activation and chemokine expression [11]. D’Agostino et al. (2015) performed an in vitro study and concluded that LMWHA accelerated wound repair because it inhibited fibroblast differentiation and collagen deposition at this early stage [11]. These effects allow macrophages to move to the wound site to phagocytose debris and clean infectious matter [16]. Several investigations also found that LMWHA prevented oxygen free radical damage to granulation tissue [19] and increased the self-defense of skin epithelium by inducing various skin-repair-related genes [20] during the wound healing process.
It is proposed that although HMWHA is used in various medical sciences, LMWHA may provide potential beneficial effects for wound healing. However, until now, the preparation of HA with a specific molecular weight has been a complex work that is not easy to control [21]. To fabricate LMWHA efficiently, several scholars used physical (ultrasound, ozone, electron beam, γ-irradiation and thermal treatment) and chemical methods (enzyme and acid degradation) to break the primary bond of HMWHA [21,22,23]. Among these methods, γ-irradiation is reported to reduce the molecular weight of HA without structural alteration of the polymer [21,23,24,25].
It was reported that, even though the main structure of HA fragments remained intact, the water-absorbing ability was changed due to the molecular weight reduction of the polymer [23,24]. However, the in vivo evidence supporting the efficacy of using LMWHA to fabricate a wound dressing membrane is still limited. Accordingly, the purpose of this study was to prepare LMWHA powder by γ-irradiation. The prepared LMWHA was used as a material to fabricate a hydrogel dressing membrane. We hypothesized that the γ-irradiated powder could be a useful material for fabricating a hydrogel membrane for skin wound dressing.

The HA used in this study (molecular weight (MW) 3000 kDa) was purchased from Cheng-Yi Chemical Industry Co. Ltd. (Taipei, Taiwan). Before the experiments, the HA powder, stored in tightly capped tubes, was irradiated using a cobalt-60 irradiator (Point Source, AECL, IR-79, Nordion, Canada) at 22 °C, with a dose rate of 1 kGy/h at the sample location. The γ-irradiated HA powder was divided into four groups. The first two HA groups were γ-irradiated with a dose of 20 kGy (20 h exposure) once (HA20I) and twice (HA20II), respectively. The third and fourth LMWHA groups were exposed to γ-irradiation at doses of 40 kGy (HA40) and 60 kGy (HA60) for 20 h, respectively. The unexposed HMWHA powder served as the control group (HA0). The irradiation dose was confirmed using alanine pellet dosimeters (FWT-50, Far West Technology, Inc., Goleta, CA, USA).
The molecular weights of the HA with and without γ-irradiation were measured by gel permeation chromatography. In this study, each group of HA powder was formulated into a 10 mg/mL HA solution in 0.1 M NaCl, and then 200 μL of the sample was injected into a separation module (Series 200, Perkin Elmer, Waltham, MA, USA) equipped with a chromatography column (SB-806M HQ, Shodex, Kanagawa, Japan). A refractive index (RI) detector (Series 200, Perkin Elmer, Waltham, MA, USA) was used to detect the signals. The mobile phase was 0.1 M sodium nitrate (purity: 99.9%, Merck KGaA, Darmstadt, Germany). The flow rate was 0.5 mL/min, and the analyses were performed at 25 °C. The calibration was achieved using a standard kit (Pullulan ReadyCal Kits, PSS Polymer Standards Service, Mainz, Germany). The gel permeation chromatography data were collected and analyzed using commercially available software (ChromManager 5.8, ABDC WorkShop, Taichung, Taiwan). The dispersity of each sample was obtained by calculating the ratio between weight average molecular weight (Mw) and the number average molecular weight (Mn) for different samples.

The 13C nuclear magnetic resonance (NMR) spectra of the γ-ray treated and untreated HA were recorded at 27 °C on a 500 MHz NMR spectrometer (DRX500 Avance, Bruker BioSpin GmbH, Rheinstetten, Germany). D2O (Sigma-Aldrich, St. Louis, MO, USA) was used as the solvent in all the NMR experiments. Fourier-transform infrared (FT-IR) spectra of the samples were detected using an infrared spectrophotometer (Spectrum one, Perkin Elmer, Waltham, MA, USA). Before tests, the γ-ray treated and untreated HA powders were mixed with KBr (Sigma-Aldrich, St. Louis, MI, USA) and compressed into disks. The wavelength range was set at 650–4000 cm−1. Transmission mode spectra were obtained from 24 scans. To detect the UV-Vis absorption spectra of the γ-irradiated HA, samples were diluted in distilled water to a concentration of 0.2% (mg/mL). UV-Vis spectra were measured using a CT-2400 Spectrophotometer (Great Tide Instrument Co., Ltd., Taipei, Taiwan) at a wavelength range of 200 nm to 500 nm. During detection, distilled water was used as a reference.

To determine the pH of the variously irradiated HA samples, the samples were diluted 1:500 in purified water and stirred for 12 h. The pH of the samples was measured with a pH meter at room temperature (Model 6173, JENCO Quality Instruments, San Diego, CA, USA) equipped with a pH electrode (HI1413, Hanna Instruments, Inc., Woonsocket, RI, USA). Before the tests, the pH meter was calibrated with pH 7 and pH 4 buffers. The rheological characteristic of the tested HA samples (prepared to 2% mg/mL solution) was measured using an oscillatory rheometer at 25 °C (Rheostress 1, Haake, Karlsruhe, Germany). The frequency range and shear ratio were set at 0.1–100 Hz. The dynamic viscosity (η*) of the tested HA was recorded as a function of the strain rate.
The moisture absorption test method was modified from that of a previous study [7]. The irradiated HA powders were dried in an oven for 24 h before testing the moisture absorption properties. Then, 0.1 g of dried HA sample was put in a 3.5 cm culture plate and placed in an incubator (REVCO RCO3000T, Thermo Fisher Scientific, Waltham, MA, USA) at a temperature of 37 °C and relative humidity of 95%. Samples were weighted every 24 h. The water absorption capacity was expressed by the change in weight of the material after the moisture had been absorbed.

A cell viability assay was performed to test the effect of the γ-irradiated HA samples on the viability of skin cells. The skin fibroblast cell line L929 (American Type Culture Collection, ATCC, no. CCL-1) was used for this in vitro cell analysis. The cells were seeded in 24-well plates at a concentration of 2 × 104 cells/mL and were maintained in Dulbecco’s modified Eagle medium supplemented with L-glutamine and 10% fetal bovine serum (DMEM, Gibco, Grand Island, NY, USA). The cells were cultured in an incubator in an environment of 5% CO2 at 37 °C and 100% humidity. The viability of the L929 cells co-cultured with 0.1% γ-irradiated HA for six days was detected using the tetrazolium salt method (MTT, Sigma-Aldrich, St. Louis, MO, USA). Briefly, after the test cells were incubated with tetrazolium salt for 4 h, 500 μL dimethyl sulfoxide (DMSO, Sigma-Aldrich) was added and incubated overnight to solubilize the formazan dye. The optical density was determined using a microplate reader (EZ Read 400, Biochrom, Holliston, MA, USA) at a wavelength of 570/690 nm.

A CMC/LMWHA hydrogel was prepared on a nonwoven fabric as described in a previous study [26] to test the wound healing effect of the prepared LMWHA. The 15 mL of CMC (10 mg/mL) and the 15 mL of LMWHA (30 mg/mL) were mixed with a magnetic stirrer. Then, the mixture was moved to the surface of a nonwoven fabric (3 cm × 3 cm). The dressings were then put into an oven at 37 °C for 3 h to form dried hydrogel dressings. In this study, due to the chemical and physical experiments and the policy to reduce animal use based on the Helsinki Declaration, only the HA20I sample was used to fabricate the dressing for use in the animal study. Dressings prepared with CMC only were used in the control group.

Eight healthy male Sprague Dawley rats weighing 210 to 290 g were used to assess the effects of LMWHA on wound healing. The rats were obtained from the Laboratory Animal Center at the National Applied Research Laboratories (Hsinchu, Taiwan). They were kept in hygienic cages and maintained with a 12 h light/dark cycle. The study protocol and procedure were reviewed and approved by the Institution Animal Care and Use Committee (IACUC Approval No. L10708), and all efforts were made to minimize the number of rats and suffering to produce reliable scientific data.
Before experimentation, the rats’ backs were shaved (5 cm × 5 cm) with an electric animal shaver, and 75% alcohol was used to avoid infection. The rats were anesthetized with 5% isoflurane in an anesthesia induction chamber. One linear incision wound with an area of 2 cm × 2 cm was made on the shaved area using sterile scissors. The SD rats were randomly divided into two groups, with four rats each in experimental and control group. For the experimental group, the wound sites of the rats were covered with the dressing prepared with LMWHA (HA20I). The HA-free dressing was applied to the wounds of the control animals. The covered dressings were replaced every two days during the 12 day experimental period. The rats were housed individually and kept at an environmental temperature of 21 °C and a humidity of 60 to 70% during the entire experimental period. The wound of each rat was photographed every two days with a digital camera. The recorded wound areas were measured using ImageJ software (National Institutes of Health, Bethesda, Rockville, MD, USA). The wound size was expressed as a percentage reduction of the original wound size.

For cell viability and animal tests, mean values and standard deviations of each measurement were recorded. One-way analysis of variance (ANOVA) with Tukey’s post hoc and Student t-tests (SPSS Inc., Chicago, IL, USA) were performed to evaluate the changes between the samples and controls, for cell and animal experiments, respectively. A p-value lower than 0.05 was considered statistically significant. 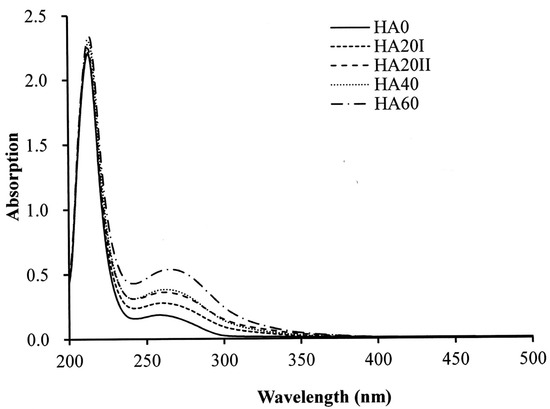 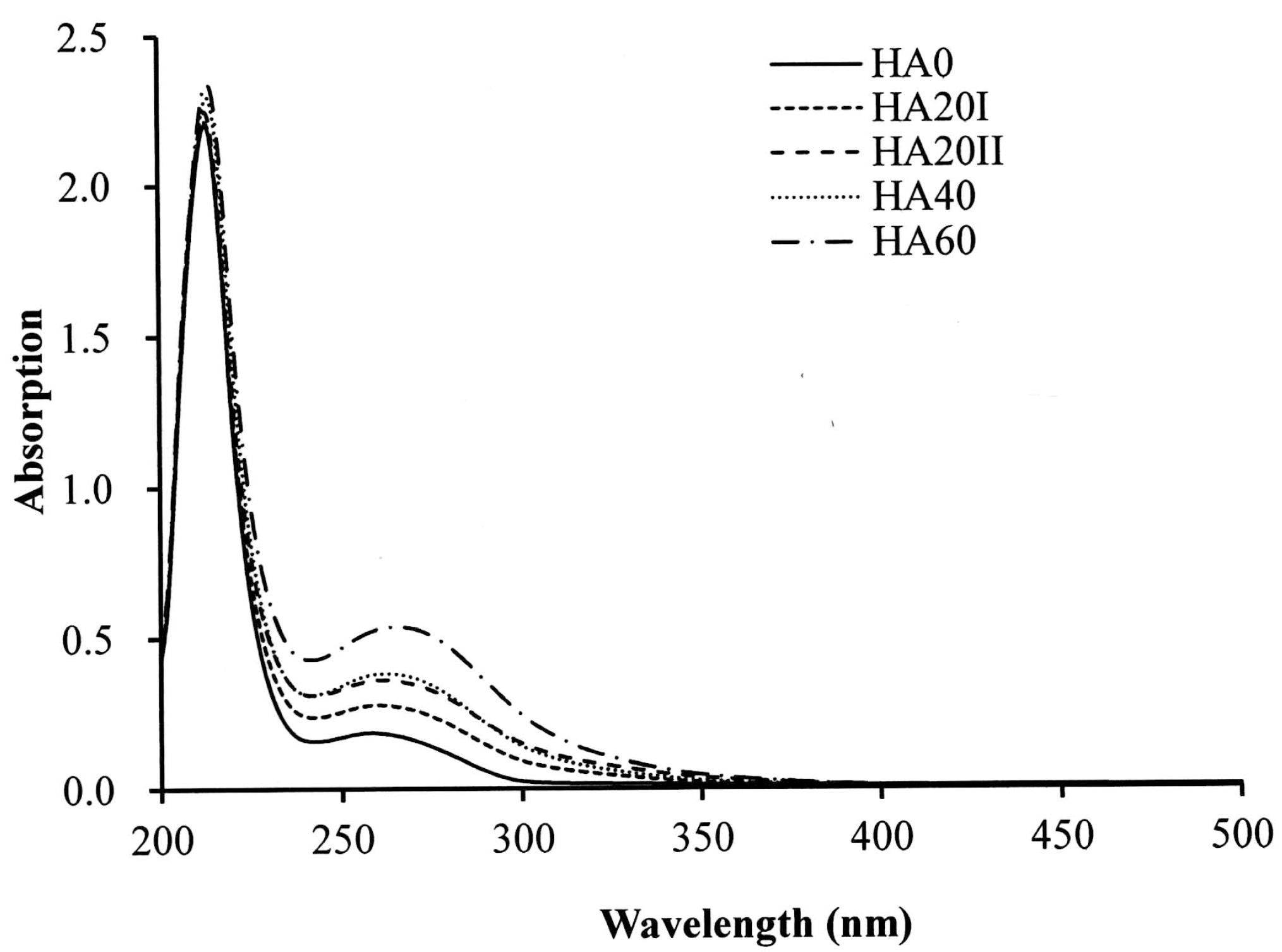 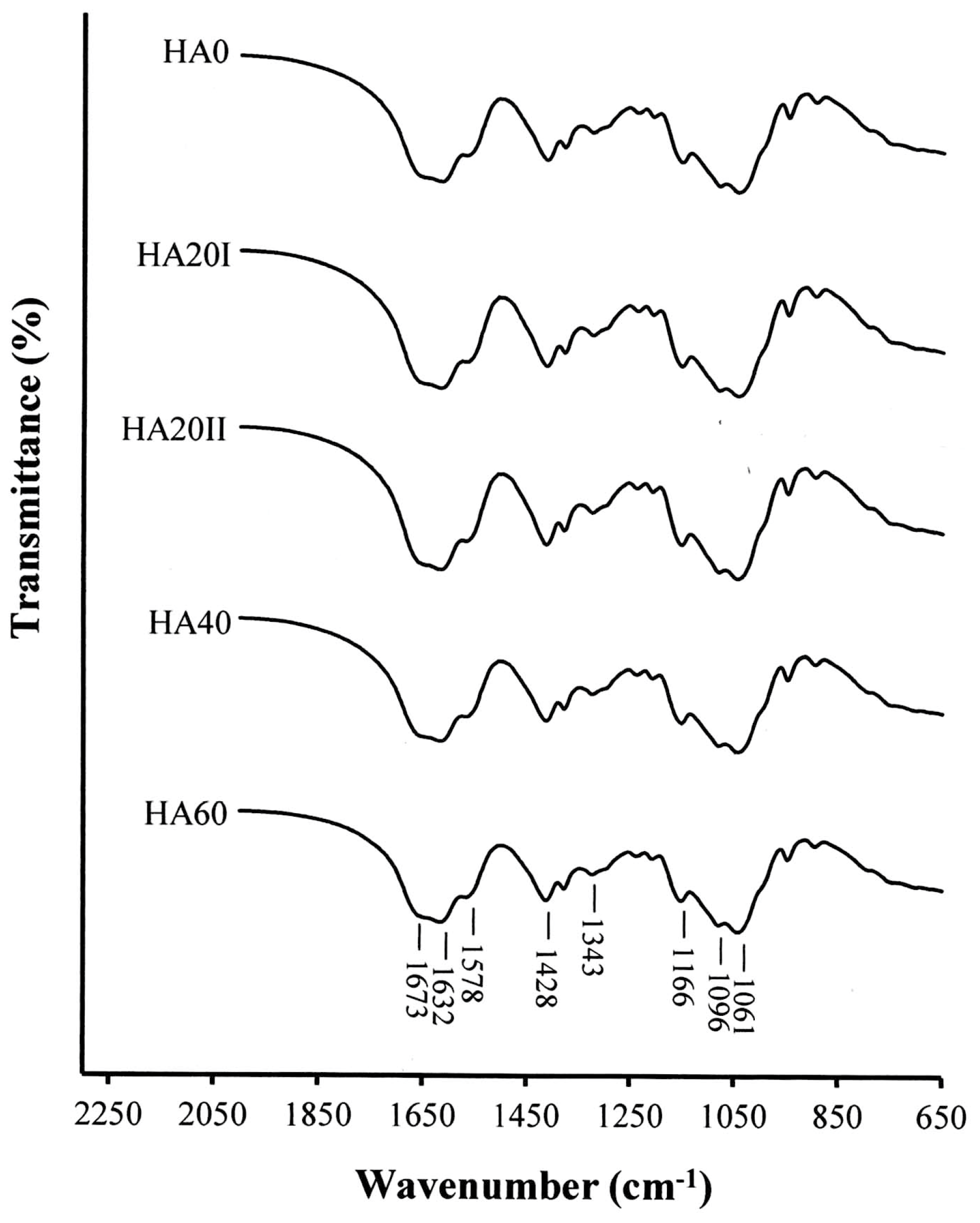 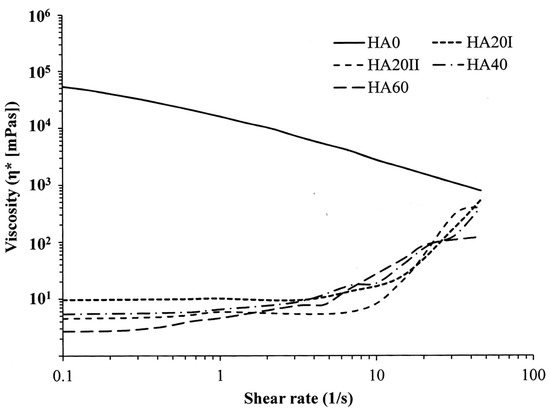 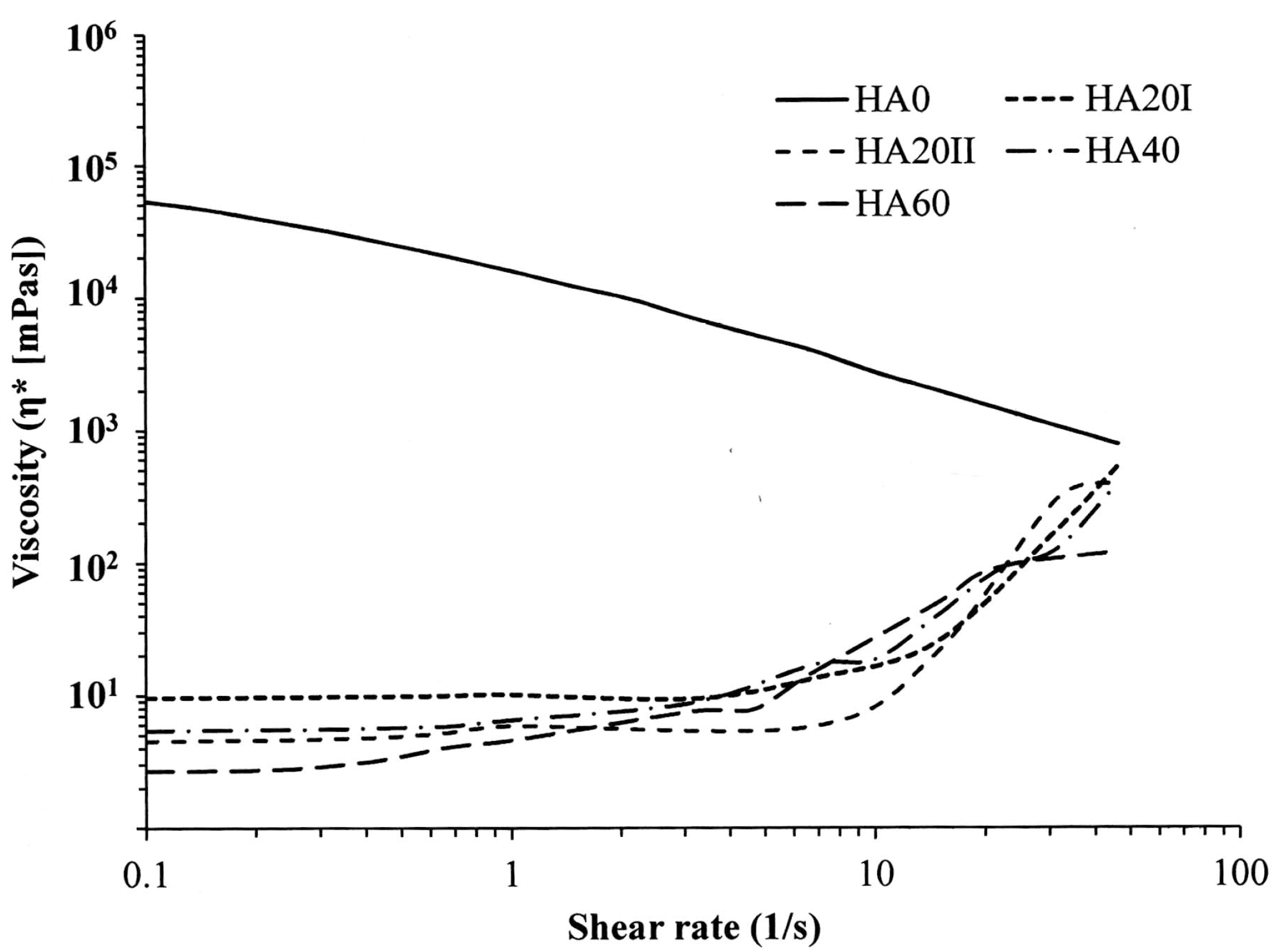 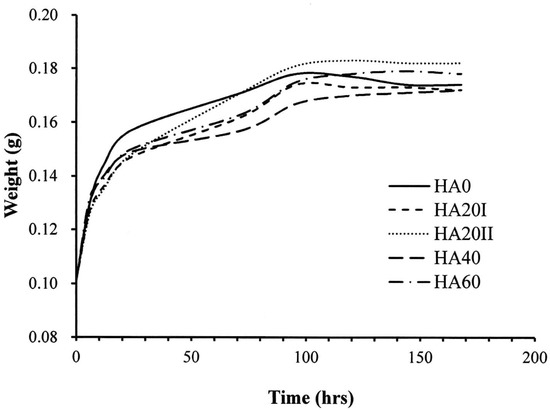 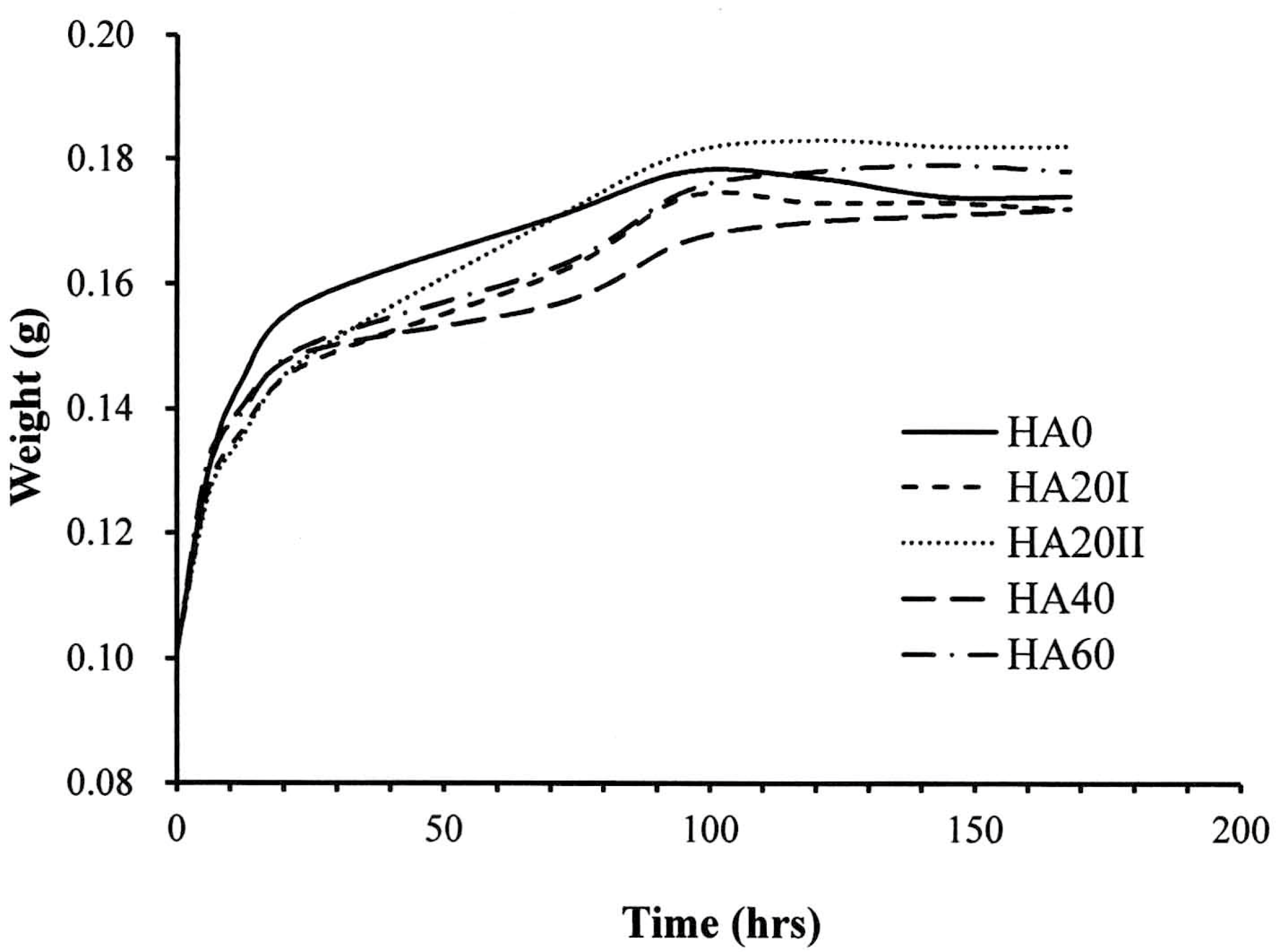 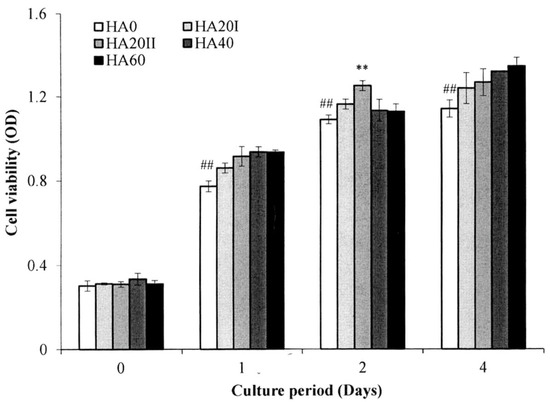