Synthesis and Gas-Permeation Characterization of a Novel High-Surface Area Polyamide Derived from 1,3,6,8-Tetramethyl-2,7-diaminotriptycene: Towards Polyamides of Intrinsic Microporosity (PIM-PAs)
Next Article in Special Issue

This study analyzes the fundamental principles and characteristics of the microcellular foaming process (MCP) to minimize warpage in glass fiber reinforced polymer (GFRP), which is typically worse than that of a solid polymer. In order to confirm the tendency for warpage and the improvement of this phenomenon according to the glass fiber content (GFC), two factors associated with the reduction of the shrinkage difference and the non-directionalized fiber orientation were set as variables. The shrinkage was measured in the flow direction and transverse direction, and it was confirmed that the shrinkage difference between these two directions is the cause of warpage of GFRP specimens. In addition, by applying the MCP to injection molding, it was confirmed that warpage was improved by reducing the shrinkage difference. To further confirm these results, the effects of cell formation on shrinkage and fiber orientation were investigated using scanning electron microscopy, micro-CT observation, and cell morphology analysis. The micro-CT observations revealed that the fiber orientation was non-directional for the MCP. Moreover, it was determined that the mechanical and thermal properties were improved, based on measurements of the impact strength, tensile strength, flexural strength, and deflection temperature for the MCP.
Keywords: fiber orientation; cell morphology; injection molding; microcellular foaming process; warpage; shrinkage; mechanical properties fiber orientation; cell morphology; injection molding; microcellular foaming process; warpage; shrinkage; mechanical properties

Plastic is cheap and has outstanding material properties for its density. Furthermore, it is easy to manufacture, so it is easy to use for the production of various components, which is why it is widely used in industry. Moreover, research on plastics is ongoing and their material properties have been enhanced to allow their use in areas that plastics could not be utilized otherwise because of their poor properties.
One current research direction is focused on enhancing the material properties of plastics to make them suitable for new applications, which has resulted in the development of fiber reinforced plastic. Fiber reinforced plastic is produced by reinforcing a plastic with glass fibers, carbon fibers, natural fibers, or similar material inside of the plastic. Injection products made of fiber reinforced polymers have especially higher mechanical strength and heat-resistance compared to the existing resins. Moreover, as injection molding can be applied to other materials similar to the existing resins without additional processes, fiber reinforced plastics have high applicability and are used widely in the industry. Injection molding is especially popular in industries such as automobile parts and electronics manufacturing, where parts with higher material properties are increasingly required. Fiber reinforced plastic injection products are being used in more areas [1,2].
The problem with fiber reinforced plastic products is the warpage that is generated after product blowdown from the mold during the injection molding process. In particular, the fiber reinforced plastic’s fiber orientation intensifies this warpage [3,4,5,6,7]. In this work, to overcome the warpage of fiber reinforced plastic, the microcellular foaming process (MCP) was used.
The microcellular foaming process is a plastic foaming process, in which micropores are formed inside the plastic. The MCP results in smaller cell sizes than the existing foaming processes, as well as a high cell density. Through the use of the MCP, the plastic is lightened by 10%~50 %, and its material properties are enhanced [8,9,10,11,12,13]. In addition, by applying the MCP, process cycle time can be decreased by decreasing the hold and packing time, and with the decrease in viscosity, the process temperature could be decreased. As a result, the application of the MCP decreases the amount of plastics used and it could be said to be an environment-friendly process because the amount of energy used in the process can be decreased [14,15]. In this study, the MCP was applied to address the issue of warpage of GFRP. Polyproplyene was selected as the base material and glass fiber reinforced specimens were prepared. We confirmed that the warpage was exacerbated when glass fiber was added and experiments were conducted in an attempt to improve the warpage of the specimen by utilizing the MCP. In a previous investigation on warpage, Baek and Lee [16] studied the warpage characteristics of film insert molded parts according to the injection molding process conditions. Their research investigated warpage characteristics according to process conditions such as temperature, speed, and pressure, and it corresponds to insert injection process without the MCP. Kramschuster and Cavitt [17] studied the shrinkage and warpage characteristics of the injection process with the MCP. They confirmed the reduction of shrinkage and warpage in the MCP via a quantitative investigation. Although the supercritical fluid (SCF) content and the injection speed were determined to have the greatest influence on warpage and shrinkage, neither the relationship between shrinkage and warpage nor the cause of the decrease was addressed. Jonathan and Park also studied GFRP using the MCP [18]. They investigated warpage and shrinkage according to process conditions such as injection speed, gas contents, and shot size. In addition, they examined shrinkage characteristics according to cell density. However, they were only able to confirm that shrinkage improves as the cell density increases. Sadabadi and Ghasemi [19] studied fiber orientation according to the process conditions in short glass fiber polystyrenes and investigated the change of fiber orientation according to the process conditions. In order to verify the compatibility of GFRP with the MCP, physical and thermal properties were measured. Bledzki and Kirschlig [20] examined the physical properties of polycarbonate when the MCP was utilized, based on the process conditions. Lin and Zhang [21] studied the physical properties of foams with short fibers and rubbers. As previously indicated, existing studies are focused on the minimization of warpage via the control of process conditions. However, there is a lack of research on the analysis of the underlying principle or cause of this phenomenon. In this study, we focused on identifying and verifying the cause of warpage reduction when the MCP is utilized as opposed to the reduction of warpage based on changes in the process conditions. Moreover, the correlation between warpage and shrinkage is not considered as a separate phenomenon. As a result, it was confirmed that the shrinkage difference according to direction is closely correlated with warpage. It was confirmed that the MCP minimizes warpage as a result of a reduction of the shrinkage difference. We also identified two causes of shrinkage difference reduction that are related to the decrease in the absolute value of the shrinkage due to cell growth and the randomization of the fiber orientation.

In this experiment, the SUPRAN resin from Lotte Chemical (Seoul, Korea) was used. The SUPRAN resin is a compound of polypropylene and glass fibers. The polypropylene base resin that was used in the SUPRAN resin is LOTTE Chemical’s J-150 grade and its density was measured according to ASTM D 792 and its value was found to be 0.90 g/cm3. Its melting index was measured according to ASTM D 1238 and the resin with a melting index of 10 g/10 min was used. Resins with glass fiber content in the range of 0%~60% in 10% increments were used to determine how the material properties change according to the glass fiber content. Nitrogen (N2) was used as a foaming gas and this gas remained in the SCF state.
The polypropylene glass fiber mixture has a relatively low process temperature and has high moldability. In addition, it has outstanding mechanical strength for its density and its price is cheap which makes it one of the most widely used fiber reinforced plastics in the industry. However, polypropylene has a low glass transition temperature of −10 °C. Because the warpage characteristics, which are caused by the fiber reinforced plastic’s low glass transition temperature, can clearly be observed, this material was selected for this research.

The process used in this research is the injection process that uses the microcellular foaming process. Figure 1 shows a schematic diagram of the injection molding equipment that was used in this research. This equipment applies the MCP to the injection molding process. It injects the gas inside of the polymer fluid that is kept in a liquid state by the temperature inside of the barrel and the friction heat from the gas in the supercritical fluid (SCF) state that was injected by the SCF supply system. Inside of the barrel in the high-temperature and high-pressure state, the melted polymer and gas are mixed into a solution. Due to the rate of pressure decrease during injection, thermodynamic instability is created to induce cell nucleation, and in the process of filling the mold, a porous structure is molded as the cells grow.

Because warpage does not have an ASTM size, the warpage was measured using the warpage measurement methods used in previously published research. Using a specimen on a plate, the maximum height of the plate specimen when warpage occurs was measured using a digital height meter according to the ASTM D 5947 standard of the solid plate in order to measure the warpage (Figure 2). For the warpage specimen, specimens with even warpage formation were used to measure the absolute value of the warpage [22].
The shrinkage value was determined based on the ratio of how much the specimen contracted in comparison to the actual mold according to the ASTM D 955 standard. The size of the specimen used was 128 mm × 12.48 mm × 3 mm and the flow shrinkage, which is the shrinkage in the flow direction, and the transverse shrinkage, which is the shrinkage perpendicular to the flow direction, were each measured. For the shrinkage specimen, a specimen with a propensity for fibers to be oriented in one direction with its fiber orientation tensor value as close to 1 as possible and a specimen that shows clear contraction deviations according to the fiber orientation were used to identify the contraction deviations from the shrinkage and the flow direction of the resin.

In this investigation, a morphology analysis was conducted for a cell. Based on this analysis, the effect of cell growth on shrinkage reduction was confirmed. Moreover, the effects of cell formation on the orientation of the fiber were also identified during the MCP. Scanning electron microscope (SEM) images were used to observe cell morphology. The cell morphology was quantified by measuring the formed cells’ sizes and the cell density was determined by calculating the number of cells per unit volume.

The morphology of the cells formed by the MCP was examined using a scanning electron microscope (JEOL Ltd., Product No. 7001F, Tokyo, Japan) (Figure 5). After applying the MCP to the fiber reinforced plastic with a glass fiber content of 20%, because over 20% of the samples exhibited significant warpage effect. Moreover, a sample ratio of fiber to cell of 20% was sufficient to facilitate observation of the cell’s morphology (Table 2). The analysis of the cell morphology of the specimen with a void fraction ratio of 15 % showed an average cell size of 15.4 μm and a cell density of 3.1 × 107 cells/ cm3. From the cells formed in such ways, the absolute reduction in the shrinkage could be identified. The gas that was dissolved inside of the polymer in the high-temperature, high-pressure barrel is eluted and forms cells, while inside of the formed cells, energetic inert gases are trapped in the cells, giving them volume and pressure. At this moment in the cell growth process, this internal pressure applies force to the cell surface. This outward force cancels the thermal shrinkage that would cause the cells to contract, thus decreasing the absolute value of the shrinkage. Through the SEM images, the even and uniform formation of cells could be identified and the fiber orientation’s changes could be identified indirectly. 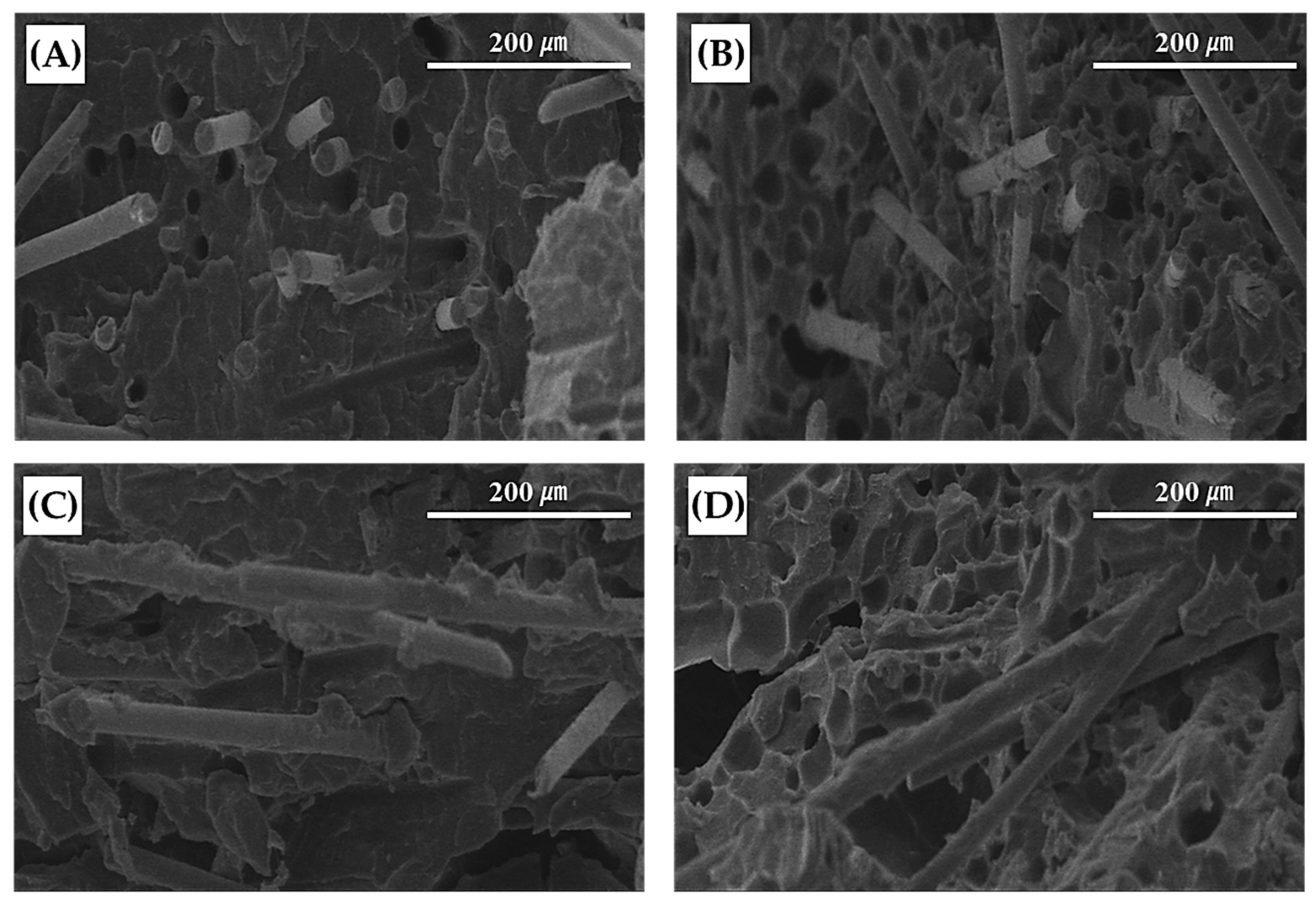 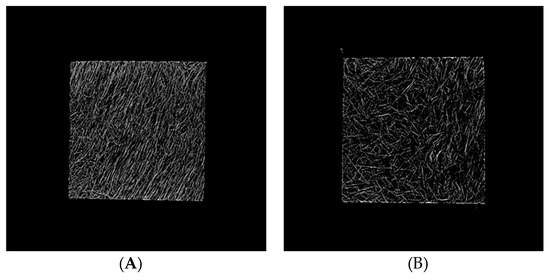 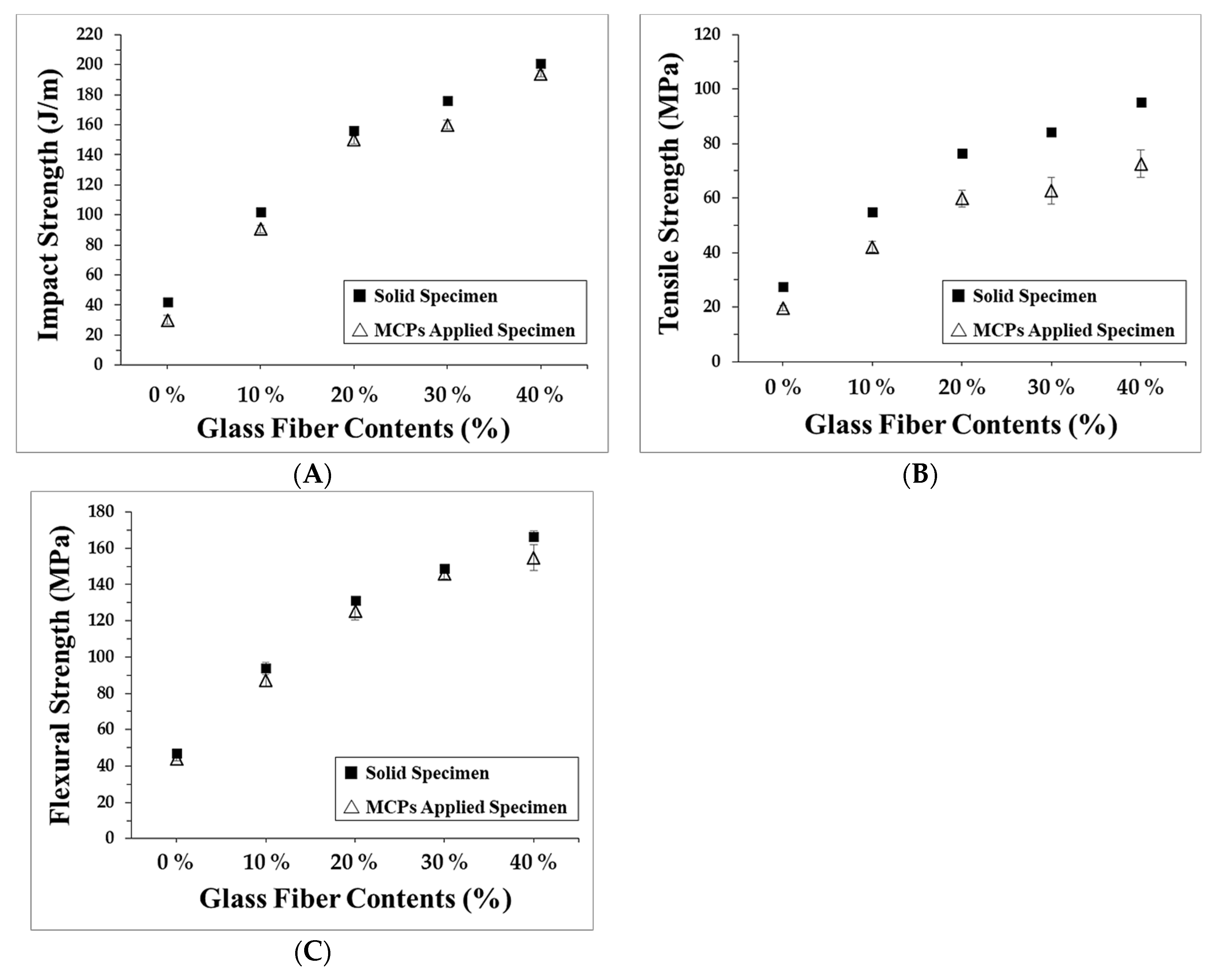