The use of waste plant protein obtained from underutilized and non-food-producing plants may be a promising strategy in the development of bioactive packaging. A series of blend films were prepared by casting from cottonseed protein (CP) and poly(vinyl alcohol) (PVA) and modified with different plasticizers. The morphology, structure, and crystallinity of each of the blend films were characterized by scanning electron microscopy, Fourier transform infrared spectroscopy, and X-ray diffraction. CP and PVA were found to be compatible in the appropriate ratios, and the CP/PVA blend films were partially crystalline. We compared the effects that four plasticizers, i.e., glycerol, triethanolamine (TEA), ethylene glycol, and polyethylene glycol, had on the performance of the CP/PVA blend films. Plasticizers altered the degree of interaction between CP and PVA, which changed the secondary structure of the CP but had little effect on the crystallinity of CP/PVA blend films. Among the different plasticizers tested, TEA was the most efficient at improving the elongation at the break, tensile strength, and oxygen barrier properties of the CP/PVA blend films. Such CP/PVA blend films plasticized using TEA can, therefore, be considered emerging and promising plastics for potential applications in food packaging and flower planting applications. View Full-Text
Keywords: cottonseed protein; poly (vinyl alcohol); plasticizer; blend films; triethanolamine cottonseed protein; poly (vinyl alcohol); plasticizer; blend films; triethanolamine
►▼ Show Figures 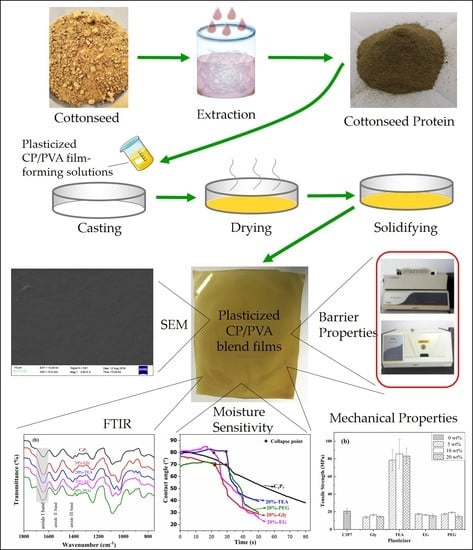