Electroactive organic dyes incorporated in layer-by-layer (LbL) assemblies are of great interest for a variety of applications. In this paper, Alizarin Red S (ARS), an electroactive anthraquinone dye, is employed to construct LbL (BPEI/ARS)n films with branched poly(ethylene imine) (BPEI) as the complementary polymer. Unconventional LbL methods, including co-adsorption of ARS and poly(4-styrene sulfonate) (PSS) with BPEI to assemble (BPEI/(ARS+PSS))n, as well as pre-complexation of ARS with BPEI and further assembly with PSS to fabricate ((BPEI+ARS)/PSS)n, are designed for investigation and comparison. Film growth patterns, UV–Vis spectra and surface morphology of the three types of LbL assemblies are measured and compared to reveal the formation mechanism of the LbL films. Electrochemical properties including cyclic voltammetry and spectroelectrochemistry of (BPEI/ARS)120, (BPEI/(ARS+PSS))120 and ((BPEI+ARS)/PSS)120 films are studied, and the results show a slight color change due to the redox reaction of ARS. ((BPEI+ARS)/PSS)120 shows the best stability among the three samples. It is concluded that the manner of dye- incorporation has a great effect on the electrochemical properties of the resultant films. View Full-Text
Keywords: Alizarin Red S; layer-by-layer assembly; UV–Vis spectrometry; electrochemistry Alizarin Red S; layer-by-layer assembly; UV–Vis spectrometry; electrochemistry
►▼ Show Figures 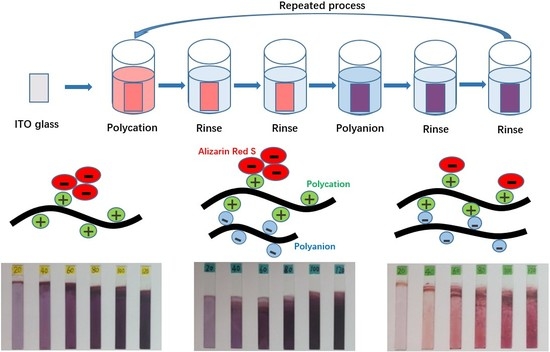