Reinforced concrete (RC) columns typical of existing structures often exhibit premature failures during seismic events (i.e., longitudinal bars buckling and shear interaction mechanisms) due to the poor quality concrete and the absence of proper seismic details in the potential plastic hinge region. The Fiber Reinforced Polymers (FRP) externally bonded reinforcement is known to be a valid technique to improve the shear capacity or the ductility of existing RC columns. However, few experimental tests have proven its effectiveness in the case of columns affected by shear interaction mechanisms. In this work, the behavior of existing RC columns with border line behavior between flexure and shear have been investigated in the case of poor quality concrete and light FRP strengthening with local jacketing and medium quality concrete and strong FRP strengthening with local jacketing, in order to highlight the effect of concrete strength on the effectiveness of the retrofit intervention. As an alternative to FRP jacketing; the effectiveness of the Fiber Reinforced Cementitious Composite (FRCC) jacketing for the seismic strengthening of columns with highly deteriorated concrete cover or columns already damaged by an earthquake is also evaluated. Six full-scale RC columns have been tested under cyclic loading: one was used as a control specimen; four were strengthened in the potential plastic hinge region with carbon FRP (CFRP); and one was fully jacketed with FRCC. The comparison between poor and medium quality concrete columns showed that the CFRP local jacketing is more effective in the case of poor quality concrete. The FRCC jacketing appears to be a sound repair strategy and a suitable alternative to the FRP jacketing in case of poor quality; however, more experimental research is needed for improving this retrofit technique. View Full-Text
Keywords: existing RC columns; CFRP; FRCC; repair; strengthening; seismic retrofit existing RC columns; CFRP; FRCC; repair; strengthening; seismic retrofit
►▼ Show Figures 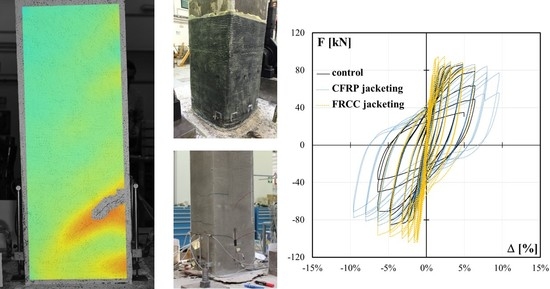