Spermidine is a functional ingredient that can extend the lifespan of many foods and indicate meat safety. However, its synthesis and enrichment is expensive and complex. To develop an effective separation material that can offer highly selective recognition of spermidine, we first applied non-covalent molecular imprinting technology using methacrylic acid as a functional monomer, azobisisobutyronitrile as an initiator, and ethylene glycol dimethacrylate as a cross-linker. The adsorption properties of the polymers were analyzed using the Scatchard equation, the Lagergren kinetic equation, and the static distribution coefficient. The optimal polymerization molar ratio of the template molecule spermidine to the functional monomer was 1:4, the maximum adsorption amount was 97.75 μmol/g, and the adsorption equilibrium time was 300 min. The selective experiment showed that the interfering substances tyramine and histamine had selectivity factor α values of 2.01 and 1.78, respectively, indicating that the prepared polymer had good spermidine recognition ability. The density function theory calculations showed that the hydrogen bond strength, steric effect, and product energy caused adsorption and separation differences among the different imprinted polymer complexes. View Full-Text
Keywords: spermidine; molecular imprint; polymerization; detection; density function theory spermidine; molecular imprint; polymerization; detection; density function theory
►▼ Show Figures 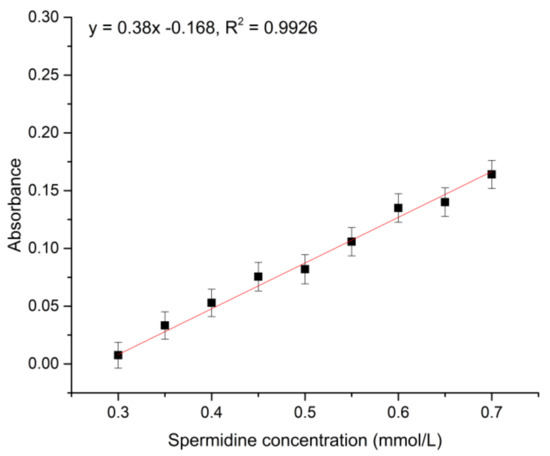 Huang, Y.-J.; Chang, R.; Zhu, Q.-J. Synthesis and Characterization of a Molecularly Imprinted Polymer of Spermidine and the Exploration of Its Molecular Recognition Properties. Polymers 2018, 10, 1389.


Huang Y-J, Chang R, Zhu Q-J. Synthesis and Characterization of a Molecularly Imprinted Polymer of Spermidine and the Exploration of Its Molecular Recognition Properties. Polymers. 2018; 10(12):1389.


Huang, Yu-Jie; Chang, Rui; Zhu, Qiu-Jin. 2018. "Synthesis and Characterization of a Molecularly Imprinted Polymer of Spermidine and the Exploration of Its Molecular Recognition Properties." Polymers 10, no. 12: 1389.