Impact of Endometallofullerene on P84 Copolyimide Transport and Thermomechanical Properties

Recently, polymer exchange membrane fuel cells (PEMFCs) have attached increasing attention for applications such as low-emission vehicles, stationary power and portable electronics [1,2]. The key component of PEMFC is the proton exchange membrane (PEM), which conduct protons and separate the fuel from oxidant. The important role of an efficient PEM contain high proton conductivity, good mechanical, chemical, thermal and dimensional stability, and low fuel permeability [3,4,5,6]. A polyperfluorosulfonic acid proton membrane nafion (Dupont) is the most widely used PEM in PEMFCs due to the high proton conductivity and good chemical stability [7,8]. However, the high cost and especially the serious methanol permeation of Nafion hinder the potential application in Direct Methanol Fuel Cells (DMFCs) [9,10]. As an alternative to Nafion, partially fluorinated [11,12,13,14,15,16,17] and non-fluorinated PEMs [18,19,20,21,22,23,24,25,26,27,28,29] have been widely developed.
Among many advanced sulfonated PEMs, such as poly (ether ether ketone) (PEEK) [30,31], poly (ether ketone) [32], polyamide [33,34,35,36,37], poly (arylene ether) [38,39] and polyimide [2,40,41], sulfonated polyimide is considered one of the most potential alternative PEM to be used in fuel cells [41]. Watanabe et al. [40] synthesized several sulfonated polyimide copolymers and showed good oxidative stability, mechanical strength and proton conductivity. Ding et al. [41] prepared a series of sulfonated polyimides proton exchange membranes; the membranes exhibit acceptable proton conductivity and low methanol permeability.
In this study, we designed and synthesized a hyper-branched non-fluorinated sulfonated polyimide (s-PI) based composite PEM to overcome the methanol crossover issue. In order to enhance the mechanical strength of the PEMs, polyvinylidene fluoride (PVDF) was used as a binder due to the great mechanical stability and high flexibility [42]. Structural and thermodynamic compatibility, which was proved to be of great importance to the quality of the blend membrane [43,44,45], between PVDF and PI has been proved [46]. The main properties of the PEMs, including the proton conductivity, methanol permeability and mechanical/thermal property, thermal stabilities were systematically investigated. The optimized PEM exhibits a methanol permeability that is low to 1.9 × 10−8 cm2/s, more than two orders of magnitude lower than that of the commercial Nafion 117 membrane [47]. In addition, the tensile stress of the optimized PEM is as high as 22 MPa. The overall performances suggest that the s-PI based composite PEM has the potential of application in DMFC.

The membranes were fabricated via a solution casting technique. The hybrid homogeneous solution of polymer and PVDF in dimethyl sulfoxide (DMSO) were filtered and cast on clean glass plates and dried at 80 °C. All the dried membranes were treated in 1M HCl solution for 12 h at room temperature, and then washed with deionized water several times until the pH = 7.

1H nuclear magnetic resonance (NMR) spectra of the synthesized products and polymer were recorded using a Bruker AVANCE IIIHD instrument (400 MHz, Bruker, Hamburg, Germany) in deuterated dimethyl sulfoxide (DMSO-d6) as solvent. The FTIR spectra of synthesized products and polymer were conducted on a FTIR Nicolet6700 spectrometer (Thermo Fisher Scientific, Waltham, MA, USA). Thermogravimetric (TG) analysis of the composite membranes was recorded on a NETZSCH simultaneous thermal analyzer (Netzsch, Bavaria, Germany) at 10 °C /min ramping up to 600 °C under a nitrogen atmosphere. Cross-section morphologies of the composite membranes were obtained from a field emission scanning electron microscopy (SEM, SU8010, Hitachi, Tokyo, Japan). Proton conductivity was measured by four-electrode AC impendence method with Interface 1000 electrochemical workstation (Gamry, Philadelphia, PA, USA). Proton conductivity was measured under the temperature from 25 to 80 °C with a relative humidity of RH = 100%. Proton conductivity was calculated using the following Equation: where σ is the proton conductivity of the membranes (S/cm), w and t refer to the width (cm) and thickness (cm) of the membrane, respectively. d stands for the distance between the two electrodes (cm). R is the resistance of the measured impedance data (Ω).
The methanol permeability of composite membranes was carried out via an “H” type diaphragm diffusion cell. One diffusion cell contained 10.0 M methanol solution and the other sampling cell contained the same volume of deionized water, which was separated by the membrane and stirred with magnetic stirrer for diffusion. The concentration of methanol in the sampling cell was measured via a gas chromatograph (9790II, Zhejiang Fuli Analytical Instruments Co., Ltd., Wenling, China). The methanol permeability was calculated according to the Equation as follows: where p is the methanol permeability (cm2/s), CA is the initial concentration of methanol (mol/cm3), VB is the volume of the compartment (cm3), A and l are the effective diffusion area and the thickness, respectively. Δt and ΔC are diffusion time (s) and methanol concentration (mol/cm3), respectively.
Ion exchange capacity (IEC) of the composite membranes was measured through the classical acid-base titration method. Dried membrane was first immersed in 1 M NaCl solution for 48 h at room temperature to replace the H+ ions with Na+ ions, and then the content of exchange proton H+ was titrated with 0.01 M NaOH solution using phenolphthalein as an indicator. The IEC value was calculated according to the following Equation: where V and C represent for the volume (mL) and the concentration (mol/L) of NaOH solution, respectively. W stands for the weight of dry membrane (g).
Water uptake and volume swelling were tested according to the following process. A piece of composite membrane sample was first placed in ultrapure water for 12 h at an ambient temperature, then the weight and the volume were immediately recorded upon removal of the surface water with tissue paper. The membrane was dried at 80 °C for 12 h under vacuum to remove the residual water to measure the volume and the weight quickly. Water uptake (WU) and volume swelling (VS) were obtained using the below Equation, respectively: where Wwet and Wdry are the weight of wet and dry membranes, respectively. where Vwet and Vdry are corresponding to the volume of the wet and dry membranes, respectively.
The tensile stress and elongation at break of a rectangular composite membrane samples was measured using Labthink XLW (PC) (Labthink, Jinan, China) with a 50 N load cell at a tensile speed of 25 mm/min at ambient temperature. 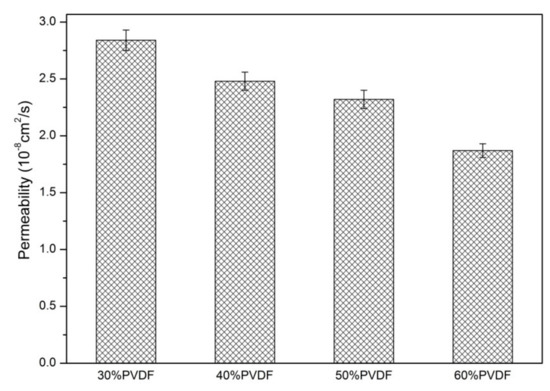 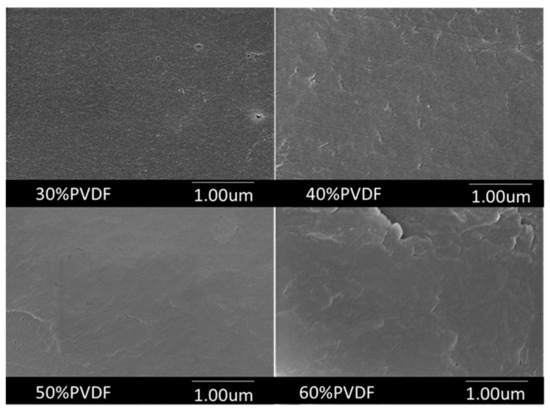 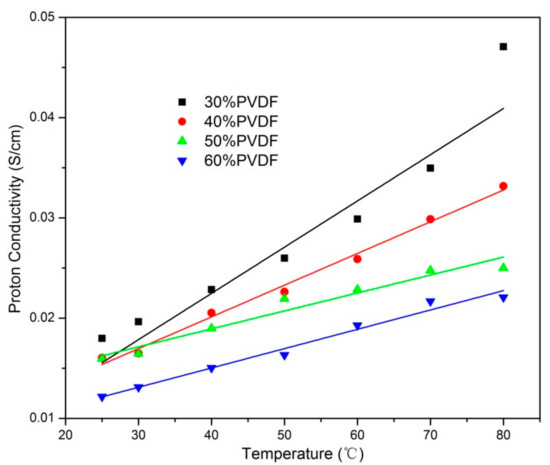 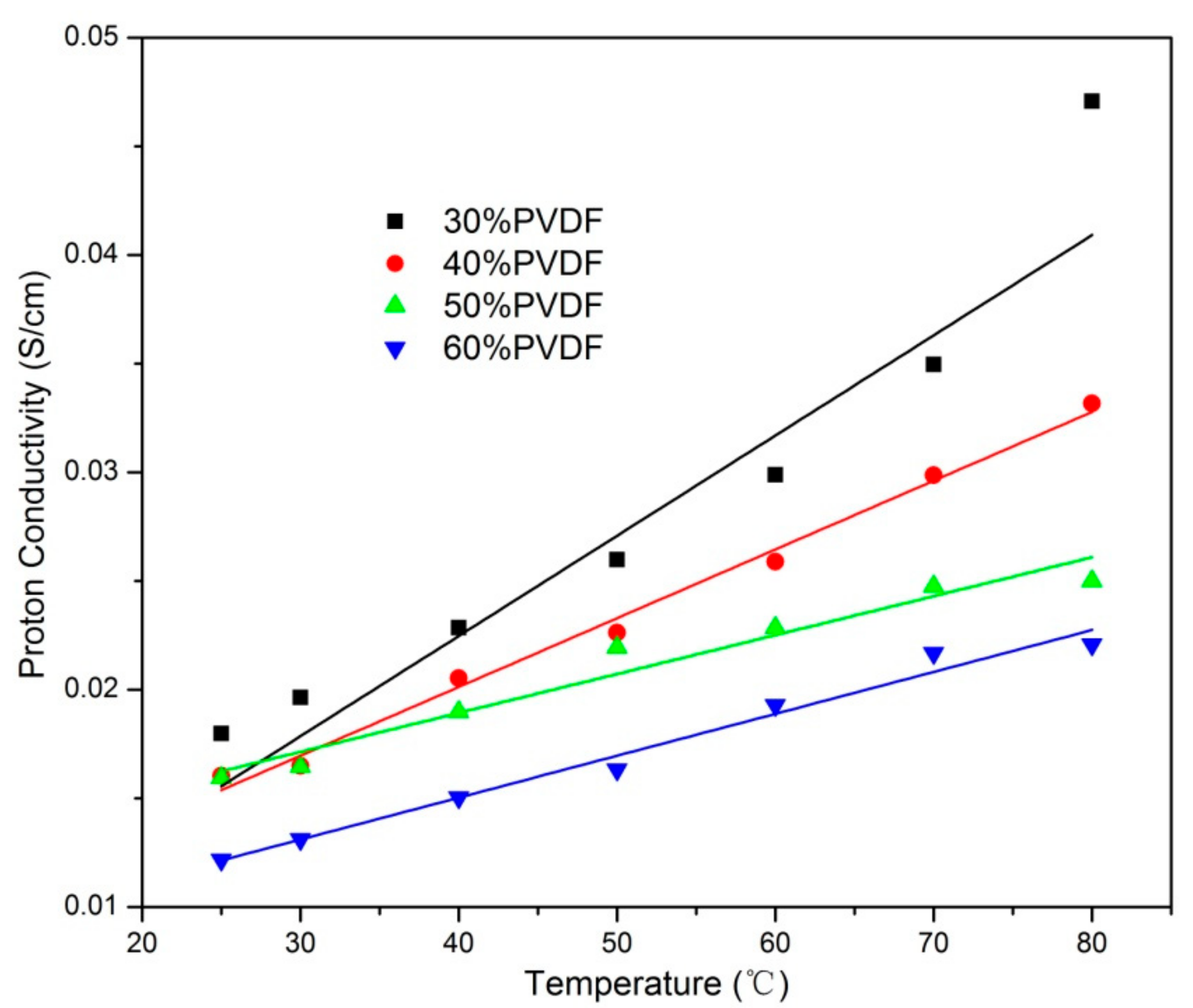