Theoretical Study of the Electronic, Magnetic, Mechanical and Thermodynamic Properties of the Spin Gapless Semiconductor CoFeMnSi
Previous Article in Journal

Recently, LEDs have been used for many applications, such as full-color displays, exterior automotive lighting, traffic lights, indicators, and cell phones. LEDs are the most important lighting devices in the future due to their advantages in terms of environmental protection, long lifetime, and vivid color. However, some existing mechanisms of the LEDs can still lead to the efficiency droop effect, such as electron overflow loss [1,2,3], lacking in hole injection [4,5], Auger recombination [6,7,8], carrier delocalization [9,10], junction heating [11], and current crowding [12].
In the past several years, many studiees have reported different kinds of electron blocking layer (EBL) of the LEDs in the literature to improve these problems, such as shortperiod superlattice (SPS) EBL with AlGaN/GaN structure, SPS EBL with graded-composition [13,14,15], and p-AlInGaN or p-AlInN EBL [16], which can inhibit the effect of electron overflow and enhance the ability of hole injection to diminish the efficiency droop effect. Iveland et al. reported the effect of efficiency droop in GaN-based LEDs that originated from the excitation of Auger recombination processes by using electron emission spectroscopy to detect the Auger electrons [6]. Galler et al. reported that when using the recombination rate equation (i.e., R = An + Bn2 + Cn3, ABC model), the dominant physical mechanism of the efficiency droop was superlinear in the carrier density of electron and can thereby be attributed to Auger recombination [7]. Delaney et al. illustrated that Auger recombination was really an important damage mechanism in the InGaN quantum wells by the calculations of the Auger recombination process [8]. Then, Yang et al. reported that the quantum efficiency and peak shift were dependent on the injection currents and exhibited a significant function of the indium alloy composition in the MQWs. Such a result offered strong evidence that the delocalization was the primary loss mechanism of the efficiency roll-off in InGaN-based LEDs [9].
As mentioned previously, the efficiency droop effect limits the use of the LEDs especially, in the case of application of a high current density. Therefore, we need to further improve the effect of efficiency droop of the LEDs. In our study, GaN-based InGaN/GaN MQW blue LEDs with different growth rates of the quantum barriers were fabricated. It is reported by Keller et al. that by using 12 pair MQW structures with 3 nm thick InGaN well and 4.5 nm thick GaN barrier, indium at a lower growth rate of GaN barrier can desorb from some areas of the InGaN well, which will cause a lower well indium content and a higher compositional non-uniformity [17]. Therefore, by modulating the growth rates of the quantum barriers, it will be expected that the injection carrier behavior in the MQWs can be improved, thus the quantum efficiency and efficiency droop of the LEDs were also investigated.

The epitaxial layers of the samples used in our study were all grown on c-plane (0001) sapphire substrates by AIXTRON metal-organic chemical vapor deposition (MOCVD) system with Close Coupled Showerhead technology. About the MO source of epitaxial growth, trimethylgallium (TMGa) (Cassen, Hsinchu, Taiwan), trimethylindium (TMIn) (Cassen, Hsinchu, Taiwan), trimethylaluminum (TMAl) (Cassen, Hsinchu, Taiwan), and ammonia (NH3) (Praxair, Hsinchu, Taiwan) were used as gallium, indium, aluminum, and nitrogen sources, respectively. Disilane (Si2H6) (Praxair, Hsinchu, Taiwan) and biscyclopentadienyl magnesium (CP2Mg) (Cassen, Hsinchu, Taiwan) were used as the doping sources of the n- and p-type GaN, respectively. First of all, a 30 nm thick GaN buffer layer was grown on top of the sapphire substrate at low temperature of 550 °C. Then, a 3 µm thick un-doped GaN layer and a 2 µm thick Si-doped n-GaN layer were grown at 1050 °C. After that, the pre-strain layer with 20 pairs and a lower indium composition InGaN/GaN structure was grown at 900 °C. Then, the carrier recombination centers of InGaN/GaN MQWs were grown. The active region of the MQWs consisted of six pairs of InGaN QW layers with 3 nm thickness and GaN quantum barrier with 6 nm thickness, which were grown at 800 and 910 °C, respectively. The growth rates of the GaN quantum barrier layers labeled LED I, LED II, and LED III were 15, 11.25, and 7.5 Å/min, respectively, which were achieved by a change in III/V ratio. Finally, a 30 nm thick Mg-doped p-AlGaN electron EBL and an 80 nm thick Mg-doped p-GaN layer were all grown at 1000 °C. In order to activate the p-AlGaN and p-GaN layers, the as-grown epitaxial wafers were all further annealed at 650 °C by the furnace in an N2 ambient atmosphere.
For the process of the LED chip, the chip size was 580 × 1140 μm2, which was defined by using standard photolithography. The mesa of the LED chip was performed by dry etching until the 2 μm thick n-GaN layer was exposed. Then, the RF sputter system was used to deposit a transparent and conductive indium tin oxide (ITO) layer with 70 nm thickness onto the p-GaN layer, which can serve as the p-type ohmic contact material, current spreading film, and transparent layer. Next, we used the e-beam evaporator to deposit an Ni/Au (30/500 nm) metal contact layer as the p-electrode on the ITO layer, and a Ti/Al/Ti/Au (15/450/50/500 nm) metal contact as the n-electrode on the exposed n-GaN layer. After that, the backside of a 2 inch sapphire substrate with epitaxial layers were polished down to about the thickness of 90 μm. Finally, the LED chips were performed by dicing saw. After the chip process, the TO-39 metal cans without epoxy resin or silicone for LED encapsulation are used to package these fabricated LED chips, which can collect the emission light. The integrating sphere detector (Forter Tech, Tainan, Taiwan) can be used to measure the light output powers (LOPs) of the fabricated LEDs. The current–voltage (I–V) curves of these fabricated LEDs were all measured by a semiconductor parameter analyzer of HP4156C. 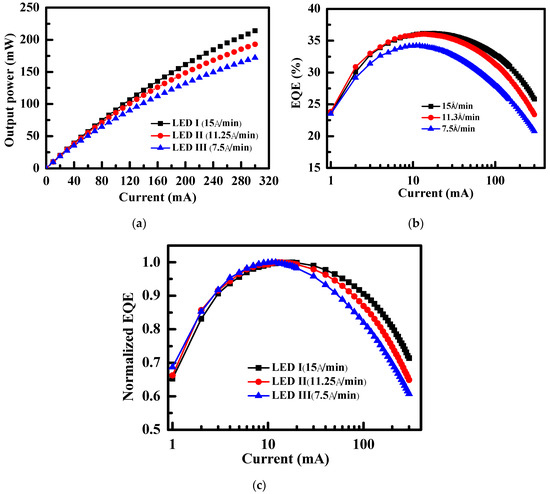 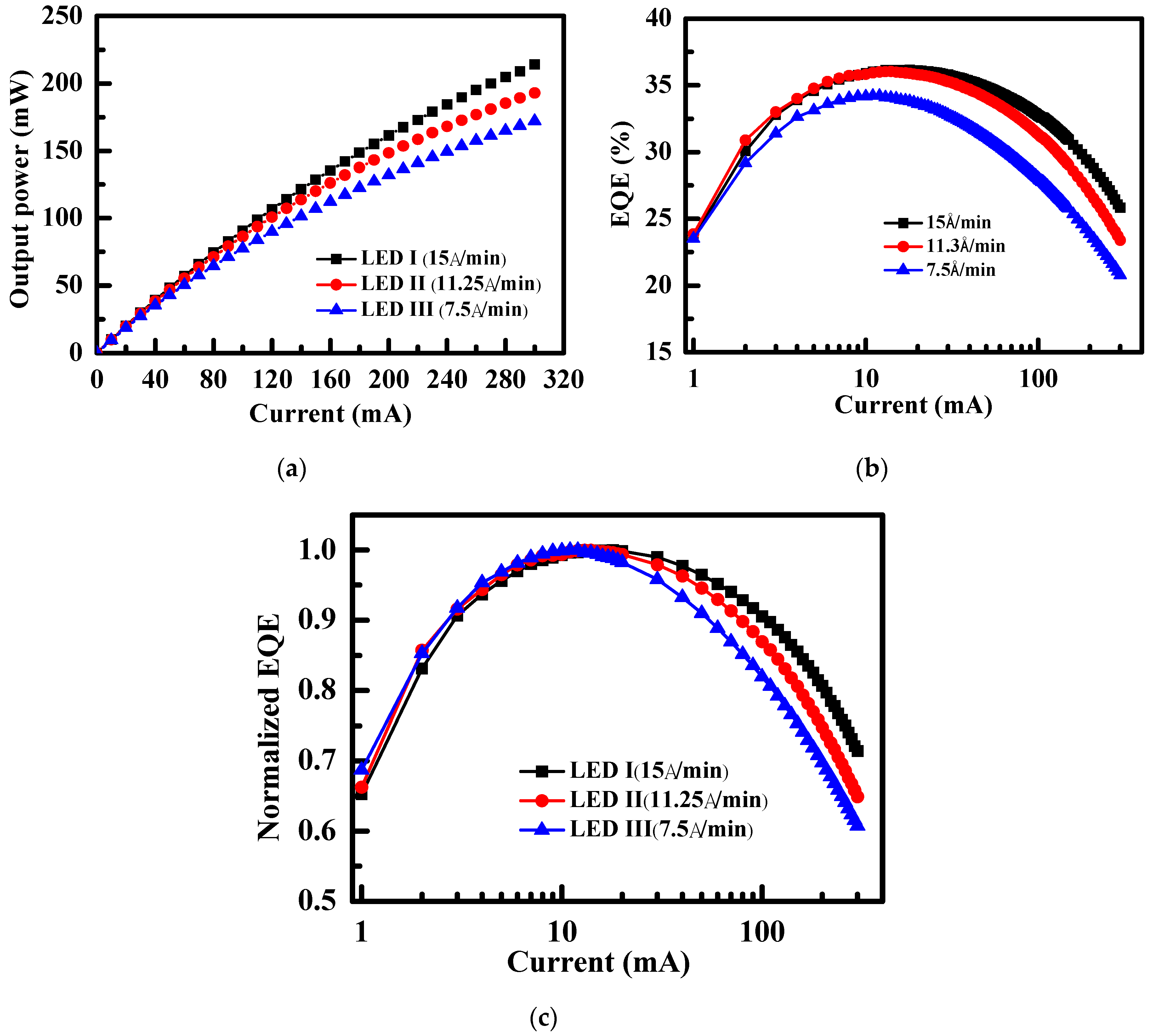 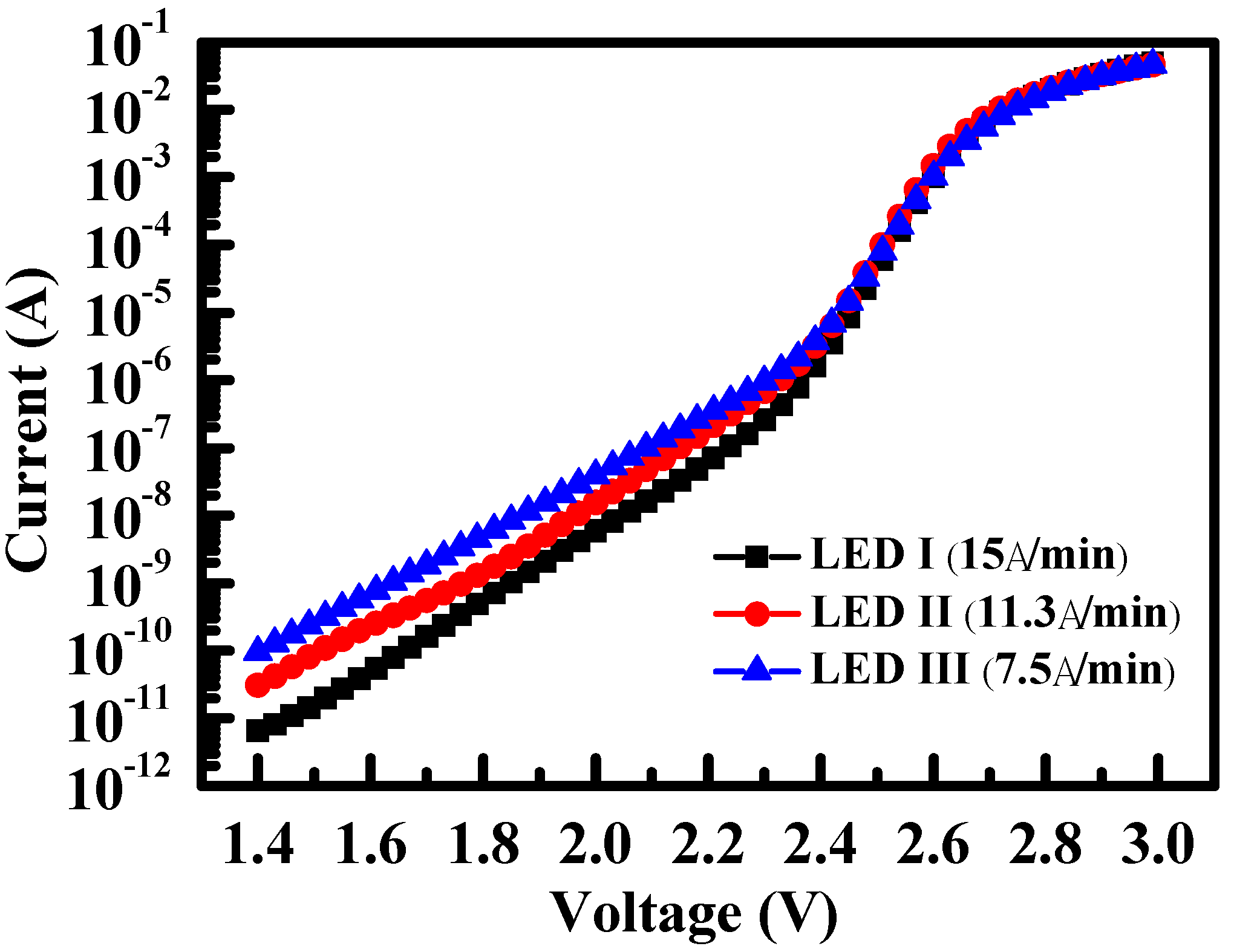 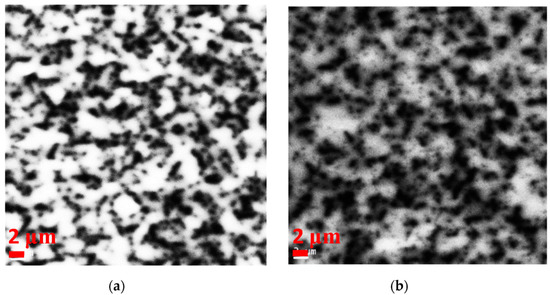 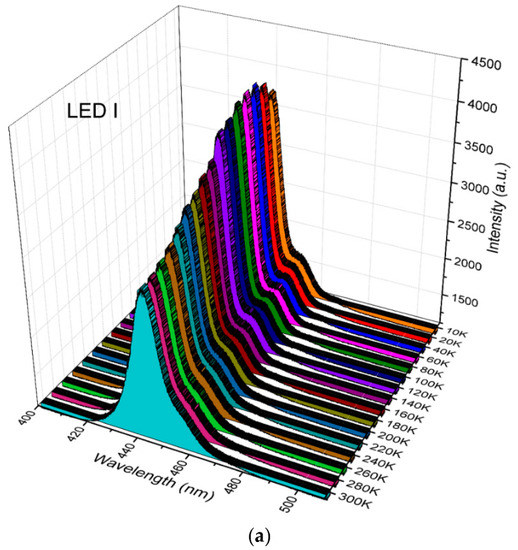