Silicon is the dominant semiconductor in many semiconductor device applications for a variety of reasons, including both performance and cost. III-V materials exhibit improved performance compared to silicon, but currently, they are relegated to applications in high-value or niche markets, due to the absence of a low-cost, high-quality production technique. Here we present an advance in III-V materials synthesis, using a hydride vapor phase epitaxy process that has the potential to lower III-V semiconductor deposition costs, while maintaining the requisite optoelectronic material quality that enables III-V-based technologies to outperform Si. We demonstrate the impacts of this advance by addressing the use of III-Vs in terrestrial photovoltaics, a highly cost-constrained market.
Keywords: HVPE; III-V semiconductors HVPE; III-V semiconductors

We performed an analysis of the potential impact of the HVPE process on III-V deposition costs, using NREL’s established bottom-up methodology [8,9,10,11]. For this analysis, we assumed that the NREL two-chamber HVPE reactor was scaled up to a high-volume, continuous reactor, with one zone for heating the substrate and one deposition zone per layer, as illustrated schematically in Methods Figure A1 in Appendix A. The deposition zones were isolated, using buffer sections incorporating inert gas curtains. As no such high volume HVPE reactor exists today, we created a basic model of the system to estimate throughput and cost per tool; this model was reviewed by members of the industry and their feedback was incorporated for accuracy. Details of the model appear in Appendix A and in Reference [12].

We demonstrated the ability for D-HVPE to grow high-efficiency devices with a performance equivalent to that of conventional MOVPE, validating this new technology for the manufacture of high-performance III-V opto-electronic devices. We also developed a cost model for D-HVPE, in a high-volume production context. Our cost model further indicates that the use of D-HVPE, together with a low-cost substrate approach, could at last enable the use of III-V’s in terrestrial PV markets, including certain residential and commercial rooftop installations. This technology could also be applied to manufacture non-PV devices, such as high-efficiency LEDs and devices for wireless communications applications.

This work was authored by the Alliance for Sustainable Energy, LLC, the manager and operator of the National Renewable Energy Laboratory for the U.S. Department of Energy (DOE) under Contract No. DE-AC36-08GO28308. Funding provided for the cost model, tunnel junction, and multijunction cell work was provided by the Advanced Research Projects Agency (ARPA-E), US Department of Energy, award #15/CJ000/07/05 and U.S. DOE Office of Energy Efficiency. Work on the single junction GaAs was provided by the U.S. DOE office of Energy Efficiency and Renewable Energy, Solar Energy Technologies Office. The views expressed in the article do not necessarily represent the views of the DOE or the U.S. Government. The U.S. Government retains and the publisher, by accepting the article for publication, acknowledges that the U.S. Government retains a nonexclusive, paid-up, irrevocable, worldwide license to publish or reproduce the published form of this work, or allow others to do so, for U.S. Government purposes.

The authors would like to thank David Guiling for materials growth and Michelle Young for device processing.

In this model, the length of each deposition zone, L, is calculated as follows: where ti is the thickness of layer i in μm, Ri is the deposition rate for layer i in μm/h, Sb is the reactor’s belt speed in mm/min, and Ds is the substrate diameter or width in mm.
We calculated the length of the heating zone, similarly, except with t equal to the required substrate temperature (650 °C) and R equal to the heating rate (assumed to be 130 °C/min, based on heating rates currently observed in the laboratory reactor). The total length of the reactor is then equal to: where Lheating and Lcooling are the lengths of the heating and cooling zones, respectively, N is the number of deposition zones, Lbuffer is the length of the buffer zone between deposition zones, and Lload/unload is the length required for loading or unloading. We assumed Lbuffer = 0.3 m and Lload/unload = 1.5 m. Here, we used a belt speed of 150 mm/min; this speed was within the range previously demonstrated for commercial vapor-phase deposition of the CdTe [25], and atmospheric pressure chemical vapor deposition (APCVD) of Al2O3 [26], of 12.7 to 381 mm/min. For the high-volume production, we assumed that there were six parallel 6” wafer tracks in the tool; similar numbers of wafer tracks have been used for commercial deposition of other thin film materials in the past. Belt speed, tool length, tool width, and deposition rate were free parameters that could be adjusted (within certain constraints) to optimize the design, when a commercial reactor is developed.
We estimated that the cost of each deposition chamber would be similar to that of a continuous APCVD system [27,28], which sometimes also consist of gases flowing, vertically, through quartz reaction tubes onto a substrate conveyed along a belt. We collected data on single-chamber APCVD reactors via industry interview, and averaged these to obtain a base price, Pbase, of $825,000, excluding automation and auxiliary costs. For a scaled HVPE reactor with a similar width, we then approximated the total tool cost as: where Lbase is the length of the deposition area for a single chamber tool, used as a proxy for the HVPE costs, in this case a continuous APCVD reactor, α is a scaling factor for the tool price with length, and β is a scaling factor representing the fractional price of each additional zone, compared to the base price. Both α and β contain significant uncertainty at this point; however, based on interviews with several major suppliers of high-volume deposition equipment, we approximated the tool costs using α = 0.75 and β = 0.6. Sensitivity analysis showed that the cost advantages of the HVPE deposition were robust to a range of α and β values.
Key assumptions made in the deposition cost analysis are summarized in Table A1. Material price values were based on quotes received from material suppliers, interviews with members of industries that purchased the materials, and (where relevant) aggregation of data from online metal pricing sources and the US Geological Survey. All material pricing was based on the assumption of a high-volume production and large orders. For HVPE deposition, we assumed additional costs for automation and auxiliary equipment and installation equal to 22% and 20% of the total tool price, respectively. The material utilization rates for the MOVPE were based on prior work [10], and have been validated again by some industry members, as recently as 2018. Material utilization rates for the HVPE are currently uncertain. A Ga and In utilization of 70% was calculated from our research scale HVPE reactor. For all analysis, we assumed U.S. manufacturing and a 100% plant capacity utilization.

We modeled the cell costs using the NREL cost model for single and dual junction III-V solar cells, under one sun illumination, first published in Reference [10]. The cost model was refined and updated in 2018, in order to reflect the current pricing for equipment and materials, as well as changes in process or capability. Figure 5 shows the device stacks modelled here. Low-cost metallization compatible with processing and epitaxial lift-off (ELO) of the III-Vs is still under development. Our cost model assumes the cell contacts are fabricated, using a low-cost plating, without the use of gold. We also assumed a high-volume ELO of the GaAs substrate and ≥100 substrate reuses, without requiring chemical-mechanical polishing (CMP). The ability to reuse the substrate with limited or no CMP, through the use of a series of buffer layers has been demonstrated in the literature, but this has not yet been demonstrated at scale or with hundreds of wafer reuses [16,17], and this may be challenging to achieve with a high yield. However, active research is taking place on the substrate reuse, including chemical lift-off and mechanical fracture technologies, and a low-cost process with a high number of reuses may be feasible in the long-term.

All materials and devices shown in this work were grown in our dual chamber, Dynamic-HVPE (D-HVPE) reactor [30], using pure Ga and In metal, HCl, AsH3, PH3, and H2 carrier gas. Dilute H2Se was the n-type dopant, while dimethylzinc was the p-type dopant. Heterointerfaces were formed by rapid mechanical transfer of the substrate between the two growth chambers, with each chamber stabilized at a new growth condition (either a change in material, doping, or both) for at least one minute before transfer. Substrates were (100) n+ GaAs doped with Si and offcut 4° towards the (111)B plane. The growth rates of the GaAs absorber layers were 60 µm/h, while the tunnel junction GaAs and GaInP layers were grown at 6 µm/h. The GaInP absorber in the tandem device was grown at 54 µm/h. An n+ GaAs buffer was grown to bury contamination at the initial growth interface, before device growth.
Solar cell devices were processed using the method detailed in Reference [31]. Unpassivated devices were processed on wafer, while passivated devices were grown inverted and removed from the wafer. First, a broad area Au contact was electroplated onto the back-contact layer. The Au surface was bonded to a Si handle, using an epoxy and the substrate was selectively etched away, using a NH4OH/H2O2/H2O 1:2:2 solution, exposing a GaInP etch stop layer. This layer was removed, selectively, with hydrochloric acid. A grid pattern was defined by the standard lithography techniques, and Ni/Au front contact grids were electroplated for the front grid contacts of all devices. Finally, 5 mm × 5 mm area devices were defined by lithography and isolated using selective wet chemical etching.
We measured solar cell external quantum efficiency (EQE) on a custom instrument, in which chopped, monochromatic light was split and then sent to the device of interest and a calibrated, broadband reference diode. We measured the output current of the device and reference on a lock-in amplifier, and used it to calculate the EQE, which is the ratio of electron current out to incident photons. Specular reflectance from the device surface was measured with a separate, calibrated reference diode.
We compared the measured EQEs to those of the calibrated GaInP and GaAs reference cells, to calculate the spectral correction factors for the AM1.5G spectrum. We set the height of a Xe-lamp solar simulator to obtain an illumination of 1000 W/cm2, determined by measuring the current from the reference GaAs cell held under the lamp and adjusting by the spectral correction factor for the subcell of interest. We set dual junction top cell illumination by placing the GaInP reference cell, under the lamp at the GaAs one-sun height, and added current using a 470 nm LED to obtain one-sun equivalent illumination. The tandem cell one-sun current density-voltage curves were measured under the adjusted spectrum. 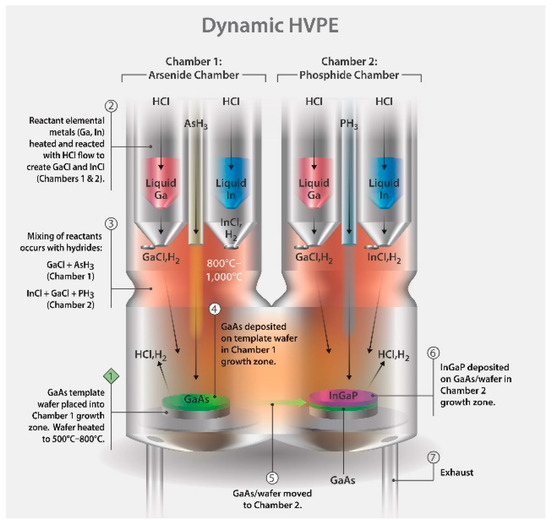 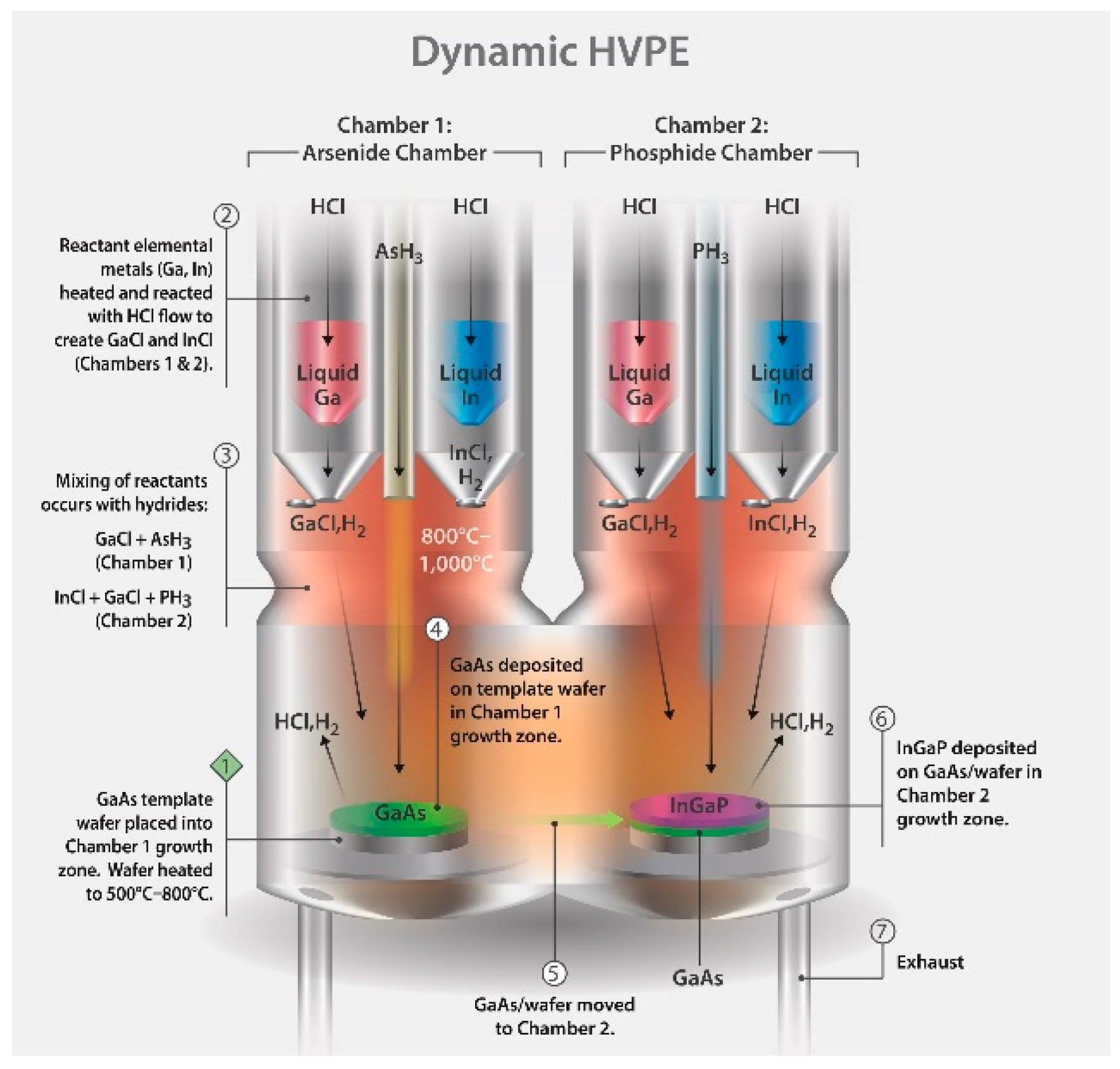 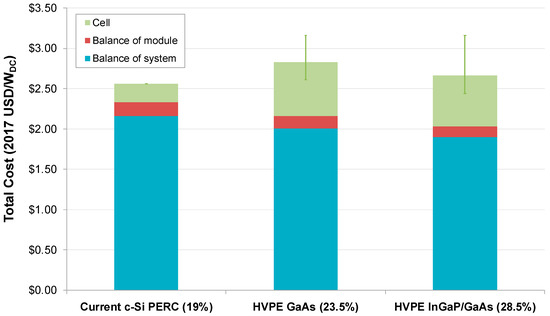 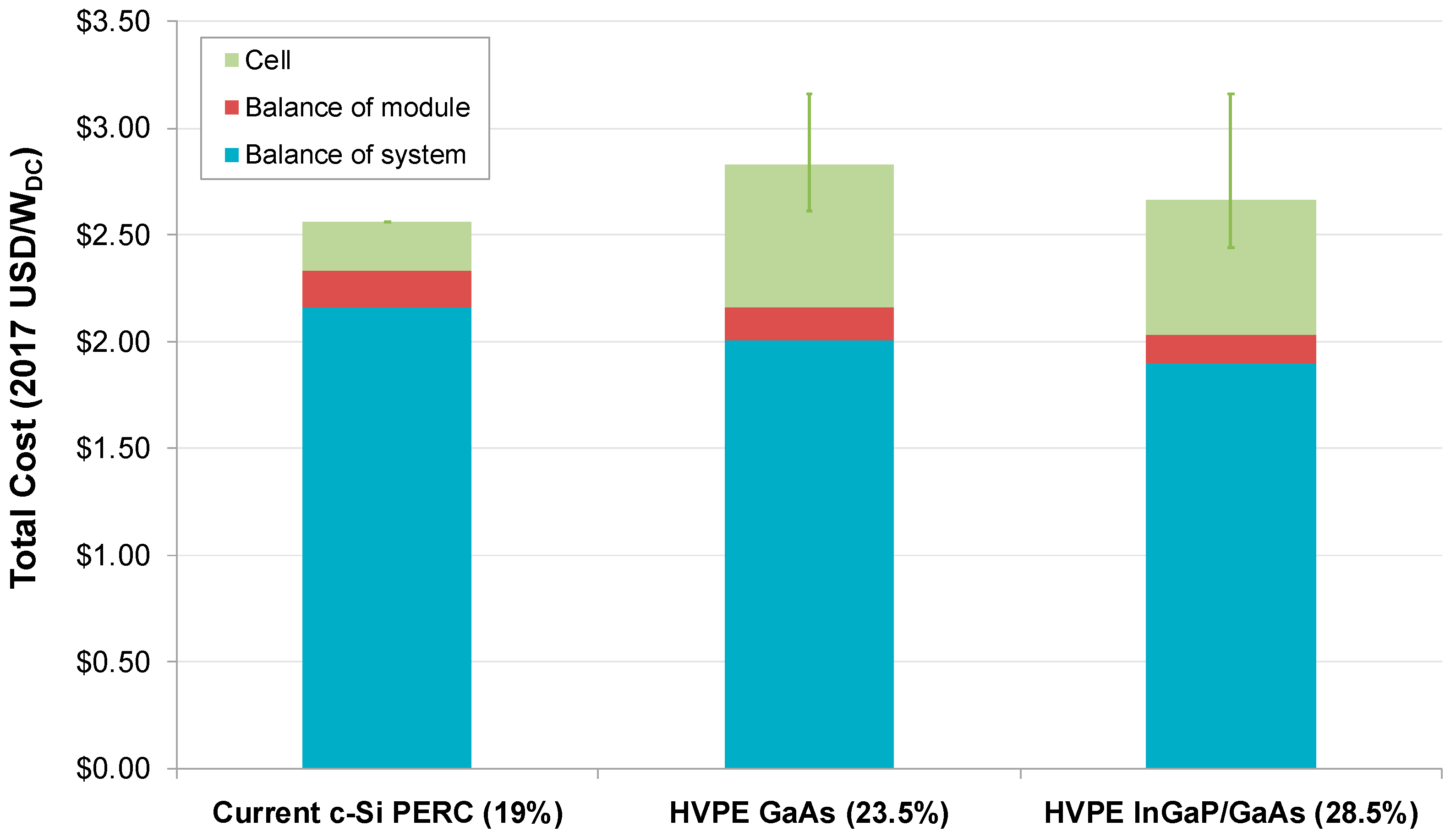 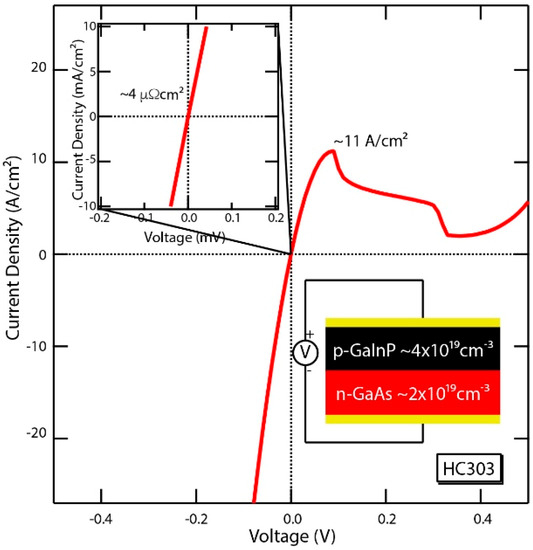 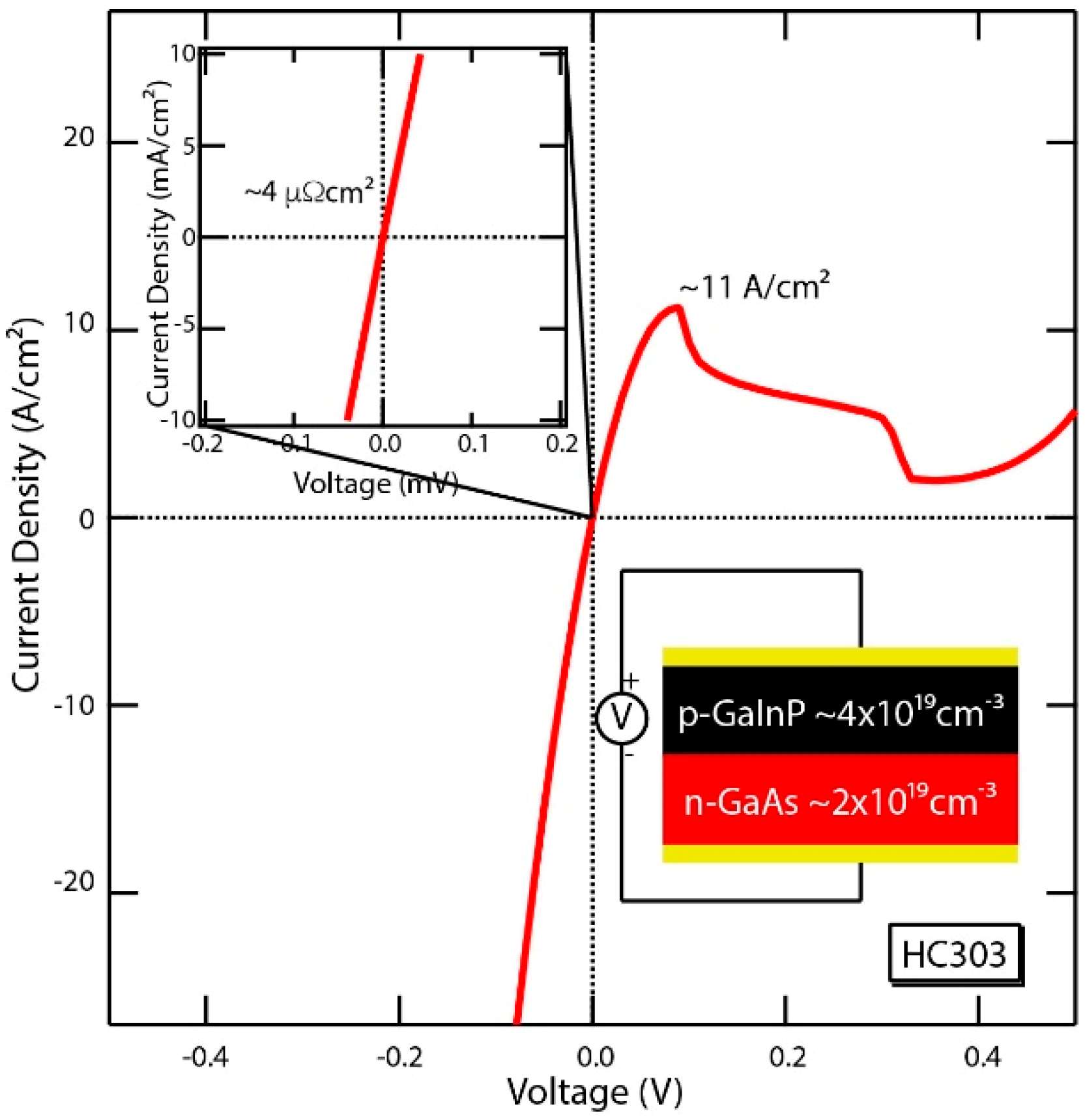 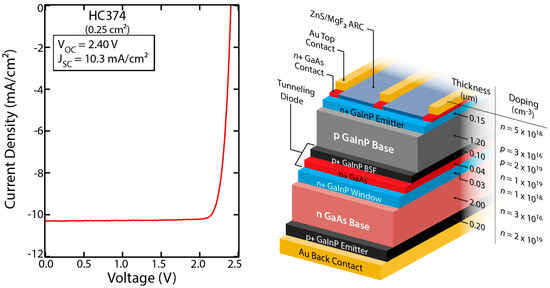 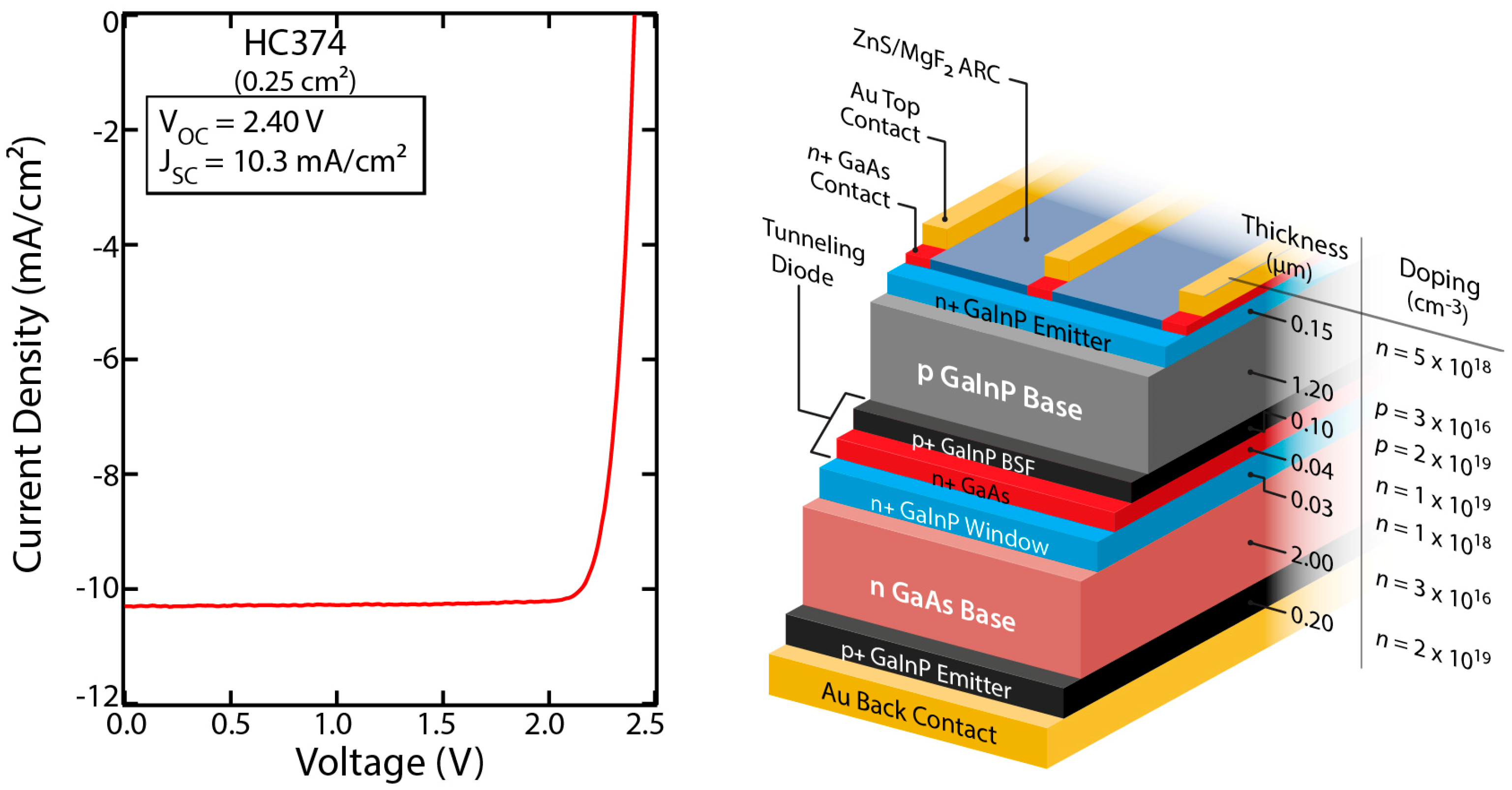