The Structure of Ferroselite, FeSe2, at Pressures up to 46 GPa and Temperatures down to 50 K: A Single-Crystal Micro-Diffraction Analysis
Previous Article in Special Issue

:
Order to disorder transitions are important for two-dimensional (2D) objects such as oxide films with cellular porous structure, honeycomb, graphene, Bénard cells in liquid, and artificial systems consisting of colloid particles on a plane. For instance, solid films of porous alumina represent almost regular crystalline structure. We show that in this case, the radial distribution function is well described by the smeared hexagonal lattice of the two-dimensional ideal crystal by inserting some amount of defects into the lattice.Another example is a system of hard disks in a plane, which illustrates order to disorder transitions. It is shown that the coincidence with the distribution function obtained by the solution of the Percus–Yevick equation is achieved by the smoothing of the square lattice and injecting the defects of the vacancy type into it. However, better approximation is reached when the lattice is a result of a mixture of the smoothed square and hexagonal lattices. Impurity of the hexagonal lattice is considerable at short distances. Dependencies of the lattice constants, smoothing widths, and contributions of the different type of the lattices on the filling parameter are found. The transition to order looks to be an increase of the hexagonal lattice fraction in the superposition of hexagonal and square lattices and a decrease of their smearing.
Keywords:
Order to disorder transitions; 2D objects; radial distribution function; quasi-crystalline model; wavelet; porous aluminum oxide; hard disks in a plane

It is well known that for particles on a plane interacting via a certain potential, the existence of a periodic crystal is impossible at nonzero temperature [1,2,3,4]. However, there exist a number of two-dimensional (2D) objects in nature that exhibit crystalline-like ordering. Usually these objects have nonperfect crystalline structure, and a question arises about transition from order to disorder. It is noteworthy that the order–disorder transition was experimentally studied from the general point of view in [5], where the destruction of a graphene layer by electron beam was investigated. A continuous transition from the crystalline state to the glassy state occurred as a result of irradiation. At the initial stage of irradiation, individual defects appeared in the lattice. Then, the glassy (disordered) regions surrounding crystallites (perfectly oriented regions) emerged. In the disordered regions, the destruction of the order initially manifested itself as pentagonal and heptagonal cells instead of hexagonal ones. The area occupied by crystallites decreased with an increase in the irradiation dose.
As was believed in [5], the experiment confirmed the validity the two competing theories of the order–disorder transition. They involve, on the one hand, the theory of crystallites [6], according to which an amorphous substance incorporates crystal-like agglomerates linked by disordered regions, and, on the other hand, the theory of random networks (see review [7]), which assumes that the order is destroyed throughout the entire volume of a substance, so that the crystal lattice transforms into random chains of atoms due to the distortion and breakage of some bonds. Thus, it follows from the experiment in [5] that single defects are formed at the initial stages. Then the theory of crystallites proves to be valid; further, the theory of random networks starts to work. We propose to take into consideration two mechanisms in order to simulate the radial distribution function of 2D systems. The first one implies the formation of vacancy-type defects (i.e., the absence of atoms in some lattice sites) while the crystal lattice structure is retained. The second mechanism corresponds to the destruction of the crystal lattice and is implemented via peak broadening in the structure factor and limitation of the peak height at large wave numbers. The method of crystal lattice smearing was used to construct an empirical radial distribution function [8]. This method was applied to describe the structure of some simple liquids [9,10,11,12,13,14,15]. A similar method of smearing of coordinate circles was used to describe artificial 2D crystals [16,17]. Here we consider a slightly different method consisting in the random shifting of the crystal nodes.

3. Hard Disks in a Plane

Let us consider a quite different system, namely, hard disk fluid. This system, on the one hand, attracts mathematicians and physicists with its simplicity, while on the other hand, it is a test bed to explore transition from order to disorder, hard disc liquid to hexatic, liquid to hexagonal crystal, and liquid to maximally random jammed state [28,29,30,31,32]. The pair distribution function characterizes the important features of the system as compressibility and the equation of state [33,34]. The limiting case of a distribution function of hard disks under increasing disk concentration is the hexagonal lattice, i.e., a two-dimensional crystal. It is reasonable that at densities close to maximum, the two-particle distribution function can be described by the smearing of a hexagonal lattice. At lower concentrations of particles, the methods of integral equations [35], based on a decoupling of the Bogolubov chain of equations, work well. In particular, the Percus–Yevick integral equation [29,35] is usually used. The question arises as to whether the smeared lattice model works not only in proximity to a crystal, but also at medium concentrations. Below we consider this model at the range of medium concentration of disks.

Comparison with Solutions of the Percus–Yevick Equation

Disk concentration is characterized by the packing fraction , where is a disk radius. It is evident that , because the centers of the two hard disks are separated by at least this distance. The value of the lattice constant has to depend on . The question arises as to what lattice should be smeared to obtain the correct pair distribution function. It turns out that qualitative agreement with solutions of the Percus–Yevick equation is achieved if a square lattice is smeared. On the other hand, it is obvious that under increased disk density, we should come to a hexagonal lattice. To take this into account, we suggest the following model: i.e., the radial distribution function is a superposition of two terms obtained by the spreading of square and hexagonal lattices with weight functions that depend on the distance. The functions and are calculated by Equation (8). The parameter determining spreading of the lattice depends on distance as ; that is, the nodes situated farther away are more strongly smeared. A comparison of the results with solutions of the Percus–Yevick equation is shown in Figure 4 and Figure 5. It should be noted that the Percus–Yevick equation is not analytically solved for hard disks on a plane, therefore numerical methods were used. It seems very interesting that the “tails” of the distribution function shown in Figure 4b and Figure 5b are modeled with high accuracy. The Percus–Yevick equation stops working when the filling parameter is greater than 0.63, which restricts the present analysis. However, it is evident that parameterization of the radial distribution function given by Equation (8) will be useful for higher disk concentrations, where phase transitions occur. Table 1 contains all the parameters used in the calculations. For simplicity, we assume that the parameters and determining smearing and some amount of defects/vacancies are the same for both lattices; however, the lattice constants are taken differently. As one can see, the spreading and number of defects decrease with increasing , i.e., the system tends to go from disorder to order. The interesting question is why the square lattice plays a major role in this range of packing fraction, and why the admixture of the triangle lattice shown in Figure 1c does not lead to a better coincidence.

Radial distribution function parameterization based on the smeared lattice model is presented. This parameterization describes the same footing as porous aluminum oxide and 2D hard disk fluid. The smeared lattice model is based on two effects: the first is the vacancy type of defect formation and the second is destruction of the crystal lattice by smearing. The success of this parameterization shows that even liquid of hard disks contains features of a crystal. The model will serve as a tool for a description of the phase transitions in 2D fluids. Variational methods [36] could be used to calculate the model parameters, such as spreading, probability of defects, and lattice constants by minimization of some function [36].

Both of the Authors developed the theoretical model. Besides, N.L.C. analyzed the data for porous aluminum oxide layer and find numerical solution for the Percus–Yevick equation for hard disks in a plane.

The Authors ask European Physical Society (EPS) to support publication of this paper, but at the moment of this final version submission there is no EPS decision yet. If the EPS support will take place the Authors will be grateful to EPS. No other external funding was used for this research. 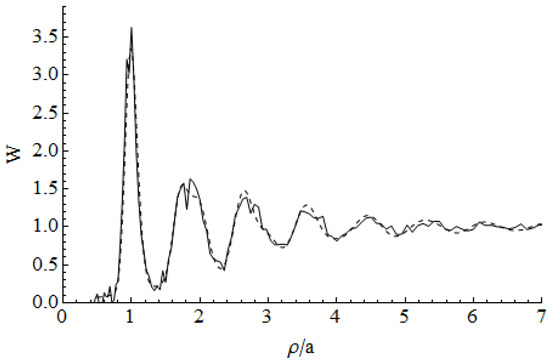 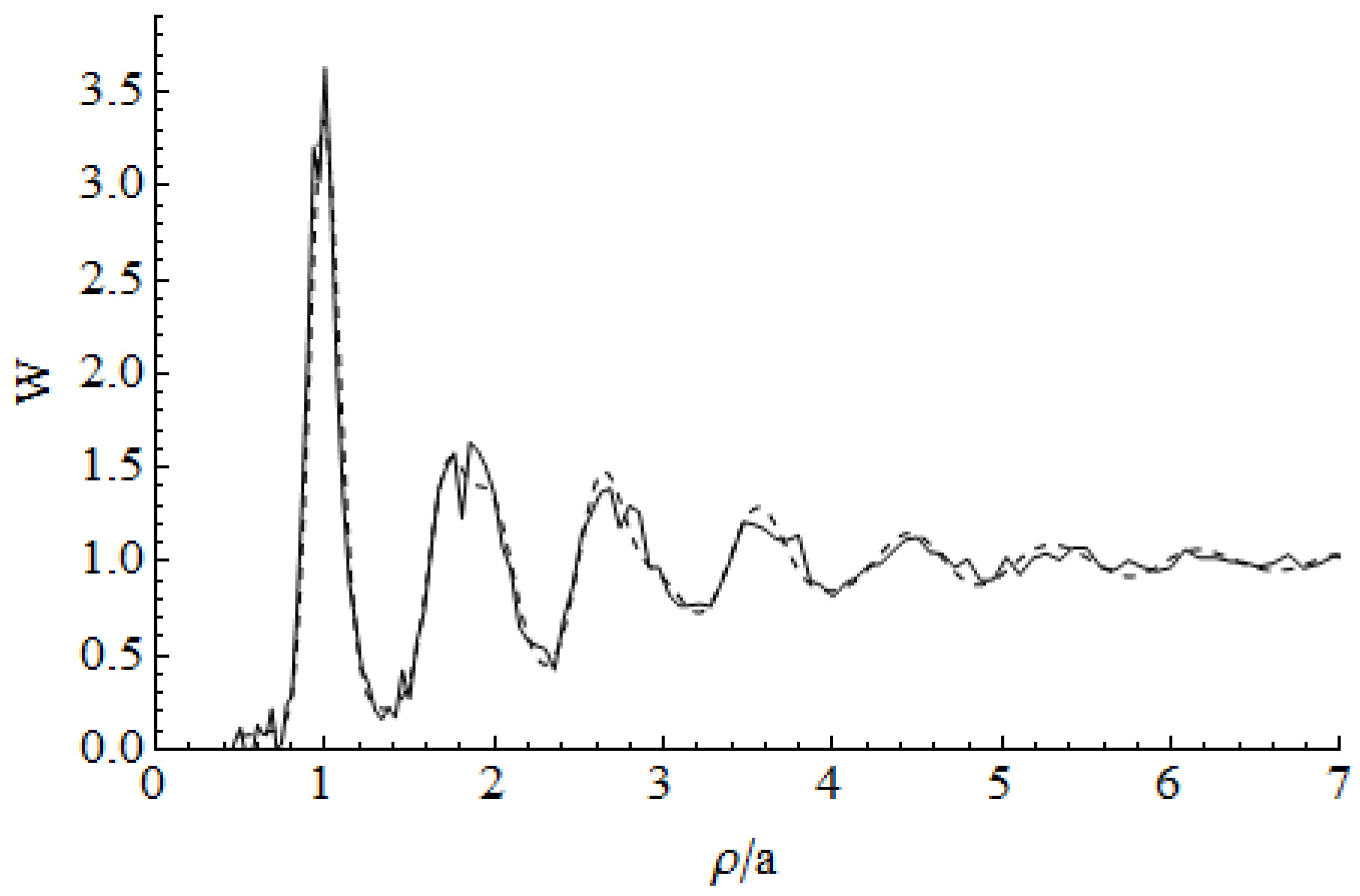