Synthesis, Structure, and Photomagnetic Properties of a Hydrogen-Bonded Lattice of [Fe(bpp)2]2+ Spin-Crossover Complexes and Nicotinate Anions

Optical Detection of Protrusive Defects on a Thin-Film Transistor

Protrusive defects on the color filter of thin-film transistor (TFT) liquid crystal displays (LCDs) frequently damage the valuable photomask. A fast method using side-view illuminations with digital charge-coupled devices (CCDs) that filter out ultraviolet (UV)490 nm was developed to detect the protrusive defects of thin-film type in four substrates of the black matrix (BM), red, green, and blue color filters. Between the photomask and substrate, the depth of field (DOF) is normally 300 μm for the proximity-type aligner; we select the four substrates to evaluate the detectability in the task. The experiment is capable of detecting measurements of 300 μm, and measurements even lower than 100 μm can be assessed successfully. The maximum error of the measurement is within 6% among the four samples. Furthermore, the uncertainty analysis of three standard deviations is conducted. Thus, the method is cost-effective to prevent damage for valuable photomasks in the flat-panel display industry.
Keywords: protrusion; illumination; height; effective pixel; gray level protrusion; illumination; height; effective pixel; gray level

The photomask is a cost component in the patterning of optoelectronic devices [1,2,3]. With the booming market of liquid crystal display (LCD) TVs moving toward large panels, the geometric complexity of the photomask increases continuously. If a protrusive defect adhered onto the substrate went through the photolithography process, the photomask will be damaged [4,5] without warning and would result in dramatic losses.
Figure 1 illustrates the mask scratches in the depth of field (DOF) at 300 μm between the substrate and photomask due to the presence of protrusions. Practically, DOF depends on the requirement of the proximity-type aligner; normally the gap is from 100 μm to 350 μm in various products.
Among the protrusive defects, statistics indicate that fragmented glass comprises 70%, metal particles 20%, and others 10% in the production line. That is to say, the fragmented glass is the key factor in damaging the photomask. Efforts were made to delineate the related defect issues in the literature. For example, Cabral et al. [6] utilized a computer vision system (CVT) for edge detection to detect glass particles in glass products used in food packaging. It is a low-cost system which consists of a conveyor belt and a PC-controlled camera. By converting the grayscale image into a binary format, the detection rate for the glass particles is 90%.
Furthermore, Wang and Tay [7] utilized an optical interferometric system using a Mireau objective to measure the surface profile of the micro-components. The accuracy of their measurements on standard blocks is comparable to an existing commercial white-light interferometer and a stylus profilometer. Ishii [8] measured the protrusion’s 3D shape using a shape-from-focus scheme, in which the focused-section method could shrink the shape contour. A ridge of 200 μm in height could be measured with a precision of 20 μm using an area charge-coupled device (CCD). Ahmad and Choi [9] proposed a 3D window for finding the best focusing points and applied it to a camera-mounted microscope for auto-grinding equipment of LCD color filters. Zhang et al. [10] implemented and compared six known shapes from shading algorithms. The performance of the algorithms was evaluated by synthetic images using the mean and standard deviation of the depth error, the mean of the surface gradient error, and the central processor unit timing.
In this study, we present a fast method to detect the protrusive defect to prevent photomask damage using a non-contact detection engaged in a CCD-based area. A cost-effective mechanism is installed on top of the platform using the side-view illumination method with an optical reflection in the dark field [11,12]. Moreover, not only can accurate results be obtained for in-line production in a timely fashion, but, additionally, the hardware equipment can be varied to accommodate different protrusive heights for any color filter film in TFT-LCDs.

This study utilizes the geometric reflectance optics to approach the albedo. The irradiance, I, is defined as the incident flux density (W/m−2) as follows [13]:
The symbol dϕi is the flux incident on the area (dA). The principle is based on the reflective shade to map an image with gray variation using CCD [8,10]. After acquiring the image, the embedded algorithm computes the gray intensity for each pixel. Each gray level takes the baseline as the threshold. If the gray level is larger than the threshold, the level will be counted into the effective pixel. The average gray level of the effective pixels converts a relative length in the range of 0–300 μm of the protrusion with respect to the 0–255 gray level. The average gray level is computed by Equation (2), in which Npixel denotes the effective pixels for which the gray level is greater than the threshold and Gi labels the gray summation for the effective pixel Npixel.
The Averagegray represents the relative length of the effective pixel while we perform the area conversion from square to circular. Figure 2 is an example representing each pixel of the gray intensity for the protrusion of height 280 μm on the black matrix (BM) layer.
In Figure 2, the pixels in blue label the gray intensity of the effective pixels; whereas, the pixels in red are neglected because their gray level is lower than the threshold intensity and are not effective pixels. Furthermore, the height of the protrusion is converted to an equivalent diameter (D) from square area to circular area by Equation (3), where L is the length of the effective pixel, k is the ratio between the area of a standard sample and the effective pixels’ area of a protrusion image. Its value depends on the protrusion types and light intensity. Hence, its value is determined beforehand using standard man-made defect samples of spheres of known diameter and light intensity. Namely, different k values for different defects are used to determine the detective height more precisely.
The image resolution depends on the optical working distances (WD, the distance between the objective and focused surface) as seen in the thin-lens maker’s formula [14]. A coarse optical resolution indicates a large magnification field of view. In geometrical optics, the proper optical resolution is shown in Equation (4) [14]: where f is the focal point; M is the magnification between the object and subject, and represents the thickness of the lens. While scanning is performed, a signal capacitor array triggers the photon electronic current on the photoactive region. Each capacitor accumulates electron charges in proportion to the light intensity. Through signal amplification and decoding devices, the original signal is reconstructed by the shift register. Moreover, the standard deviation, (sigma) calculated by Equation (5), is used to quantify the accuracy of the measurements; where is the mean value of the dataset , and is the number of the samples.
In the end, the study utilizes side-view illumination to detect the protrusive defects and then transforms its effective pixels to calculate the equivalent diameter.

A schematic diagram of the side-view illumination protrusive detection system which connects an area CCD to detect the protrusion in the dark field is shown in Figure 3. The system is installed on a flat platform on which two low-pressure sodium lights connected to the optical fibers are used to emit a set of parallel lights with the wavelength range covering more than the visual light. The tolerance of the platform is horizontally maintained at ±10 μm to ensure measurement accuracy. The platform accommodates the 6th generation TFT-LCD size of 1850 mm × 1500 mm. The optical system detecting area can be adjusted by the capability of the CCDs selected, including the whole field of view. The optical working distance from the substrate to the lens (focal length 50-mm, f/2.8) is 1452 mm. The parameters of the geometrical optics are tabulated in Table 1.
The photosensor is a 30 fps, regular 8-bit, 256-grayscale, commercial off-the-shelf industrial area CCD with 4872 × 3248 pixels; the field of view is 650 mm × 974 mm (length × width). An automatic data acquisition program (ADAP) is used to obtain the height of the specific protrusion. The selected light spectrum is from 490 nm to 1050 nm so that the ultraviolet spectra are filtered out to avoid overexposure of the substrate. Typically, when the substrate is loaded to the platform in-line, the image is captured by the area CCD through the automatic data acquisition program. Then, the data output is performed automatically. The innovative method is fast, cost-effective, and reliable with 94% accuracy in the production line. Experiments are conducted in a 100-class clean room.
The protrusion defects are purposefully induced to test the present method. They are tailor-made samples of known diameters with individual thin-film of BM, red, green, and blue photoresists (PRs) coated around the glass ball.

An innovative technique employing a symmetric pair of side-view illuminations with area-CCDs and automatic data acquisition for the fast detection of the protrusions of thin-film types to prevent photomask damage is developed in this study. The methodology utilizes a non-contact detection method using area-CCDs with a cost-effective mechanism that filters out the ultraviolet (UV) wavelength of light source below 490nm to avoid overexposure of PRs. Irrespective thin-film protrusion types in TFT-LCDs are intercepted timely. The calibration parameter k, defined as the ratio between the standard sample area and the protrusion image area, varies inversely with the sample height. The results show larger k at the central region for the BM film sample. On the other hand, colored film samples show smaller k at the center due to their higher reflectivity. The error for the BM thin-film is 6%, larger than those of PRs. In addition, its 3σ deviation is 23 μm in contrast to the protrusions of red, green, and blue of 15, 18, and 20 μm, respectively. The method can detect the height of protrusive defects at 300 μm and even heights lower than 100 μm can be assessed successfully to prevent damage of the photomask with an accuracy rate of 94%, irrespective of the thin-film types. The results conform to the criterion for 90% in the TFT-LCD industry. 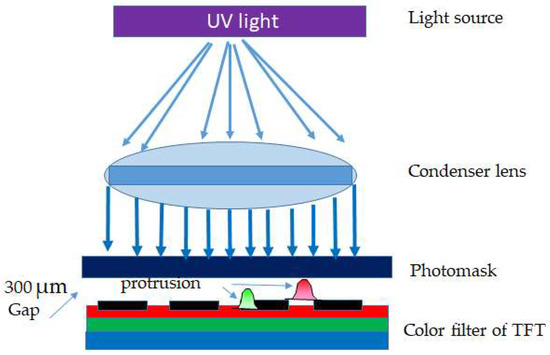 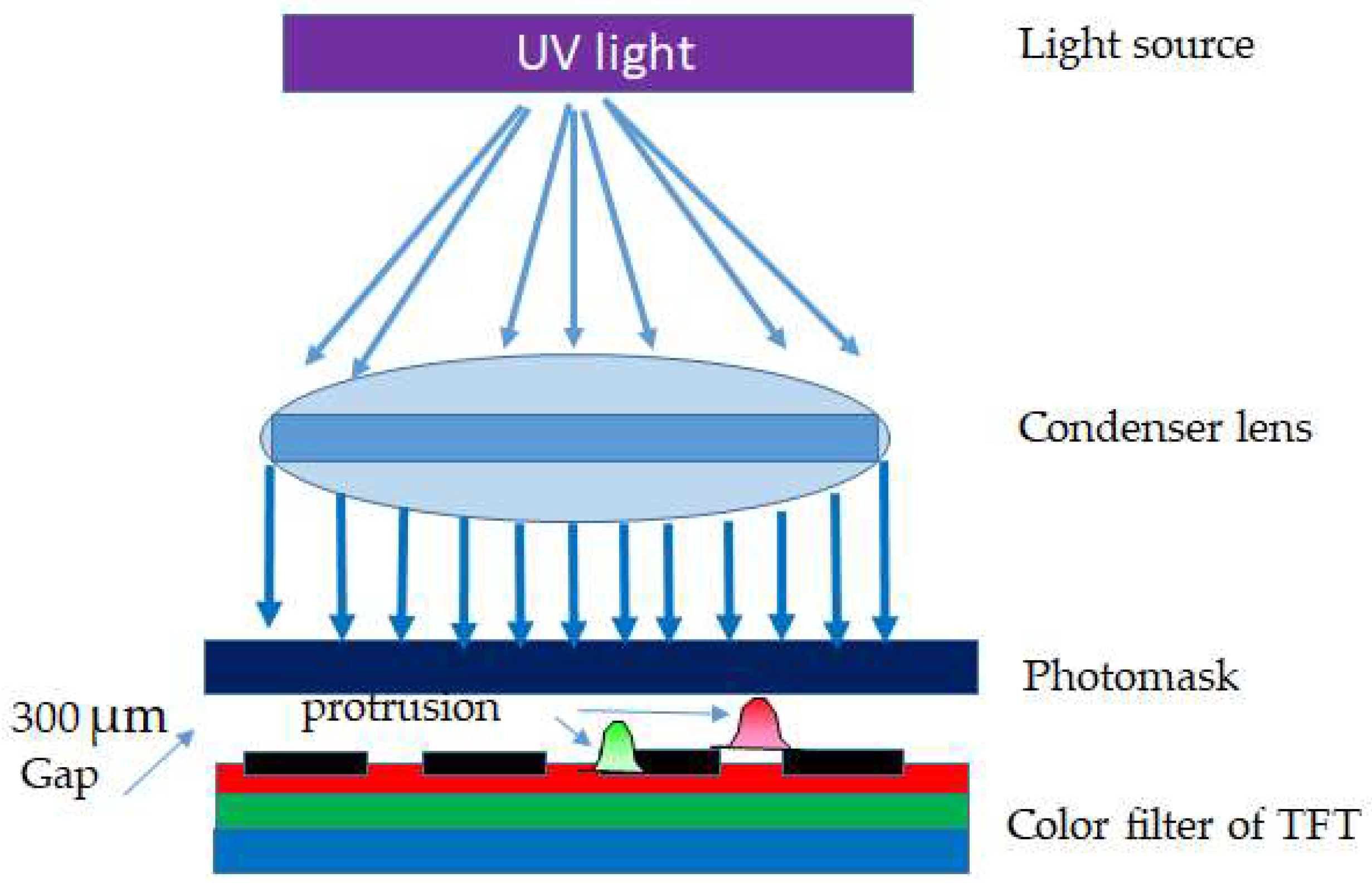 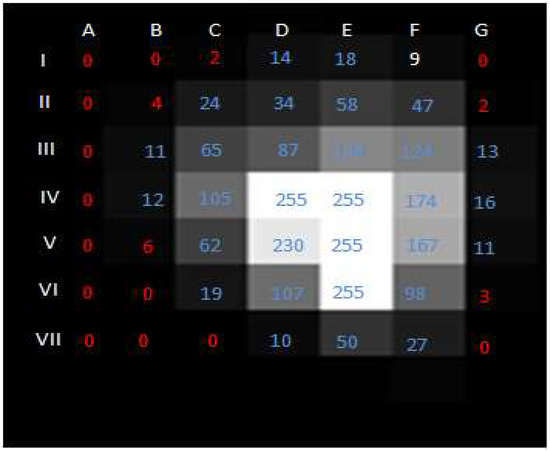 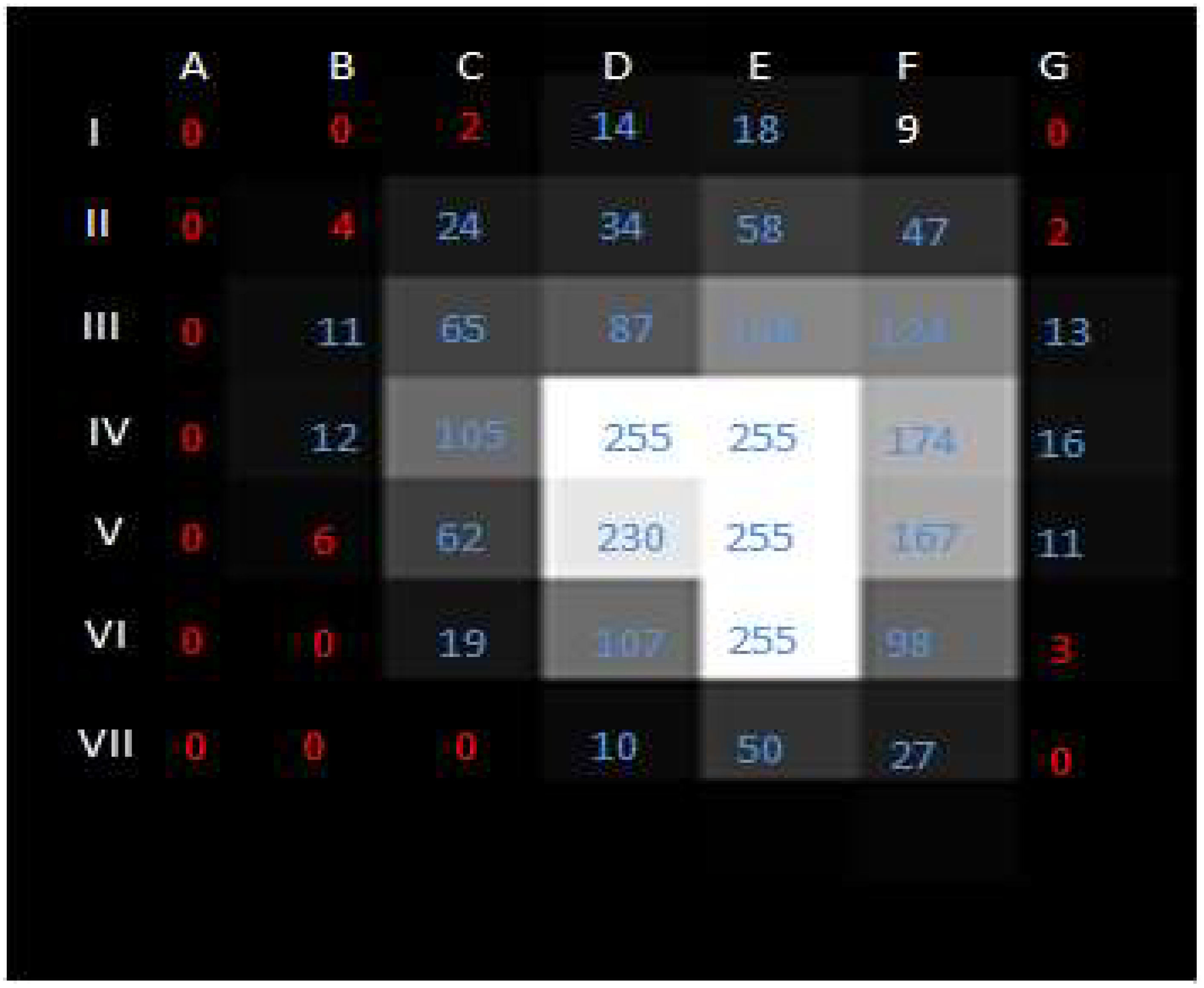 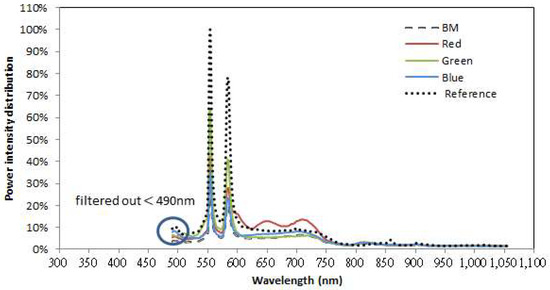 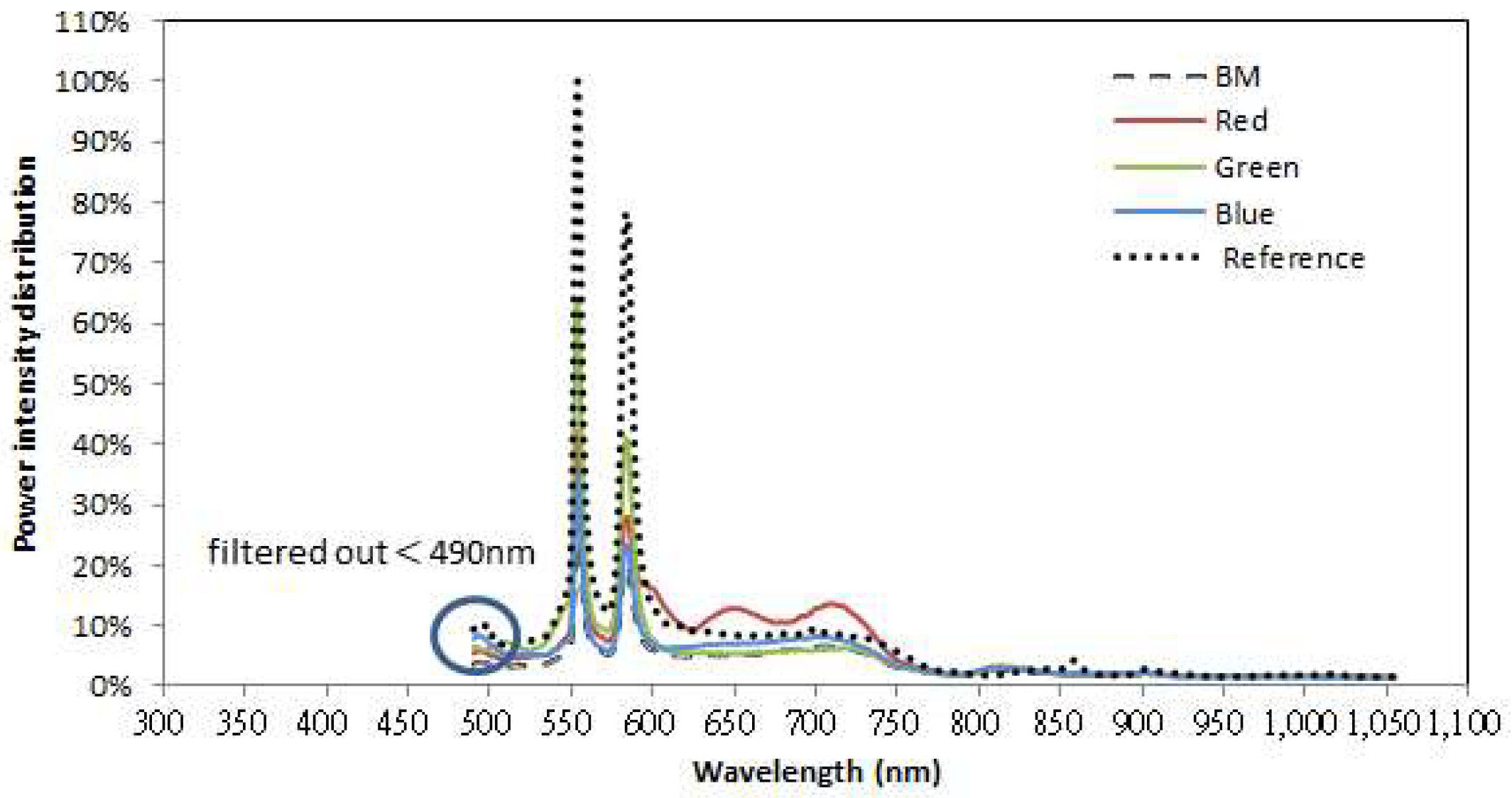 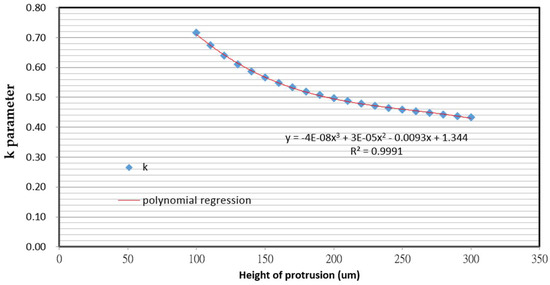 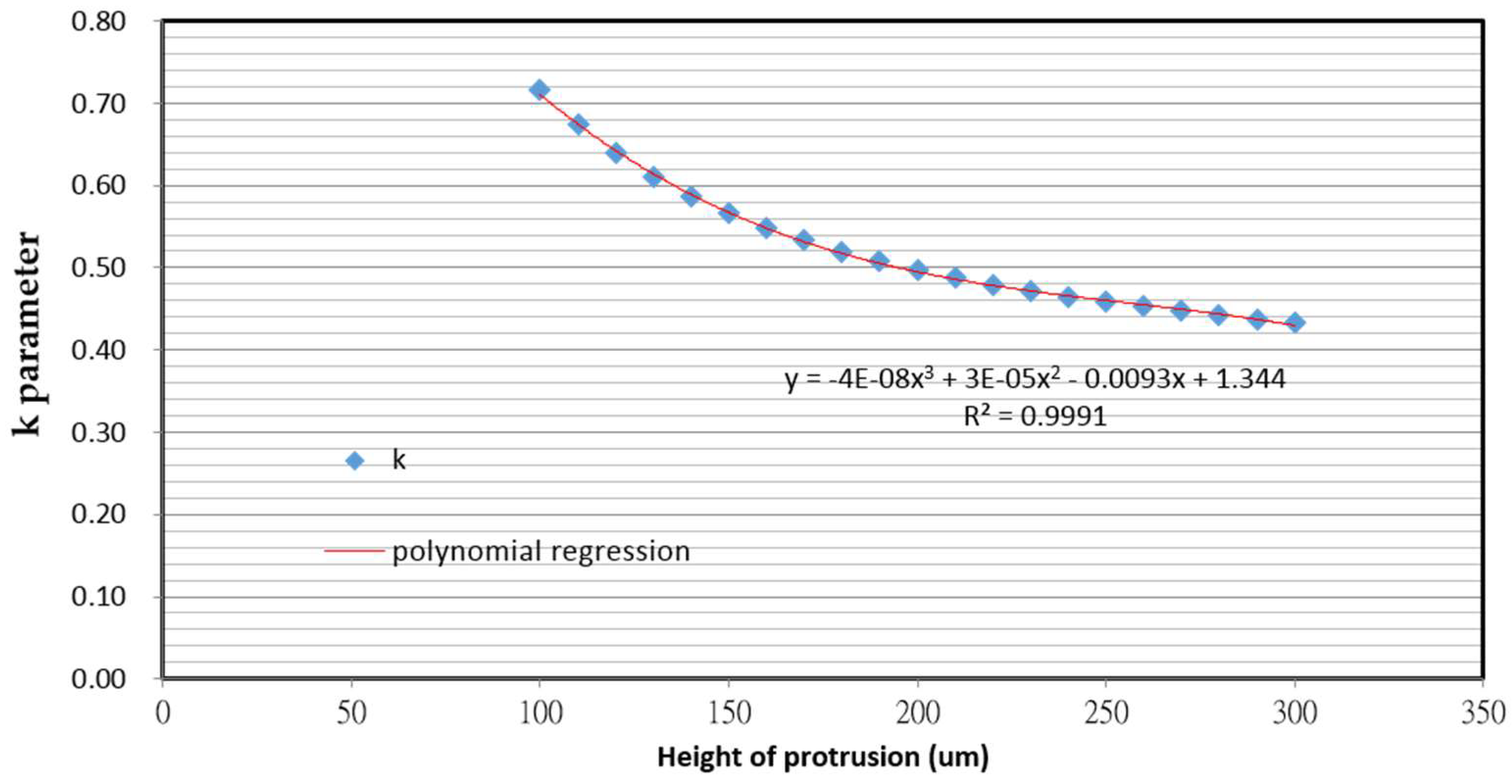 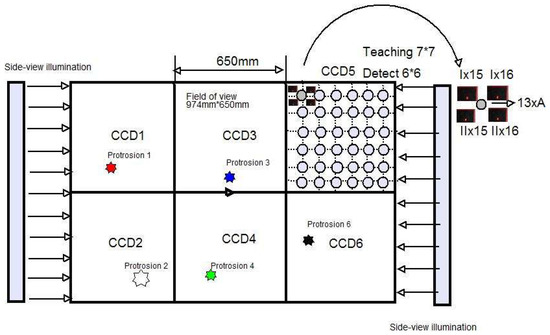 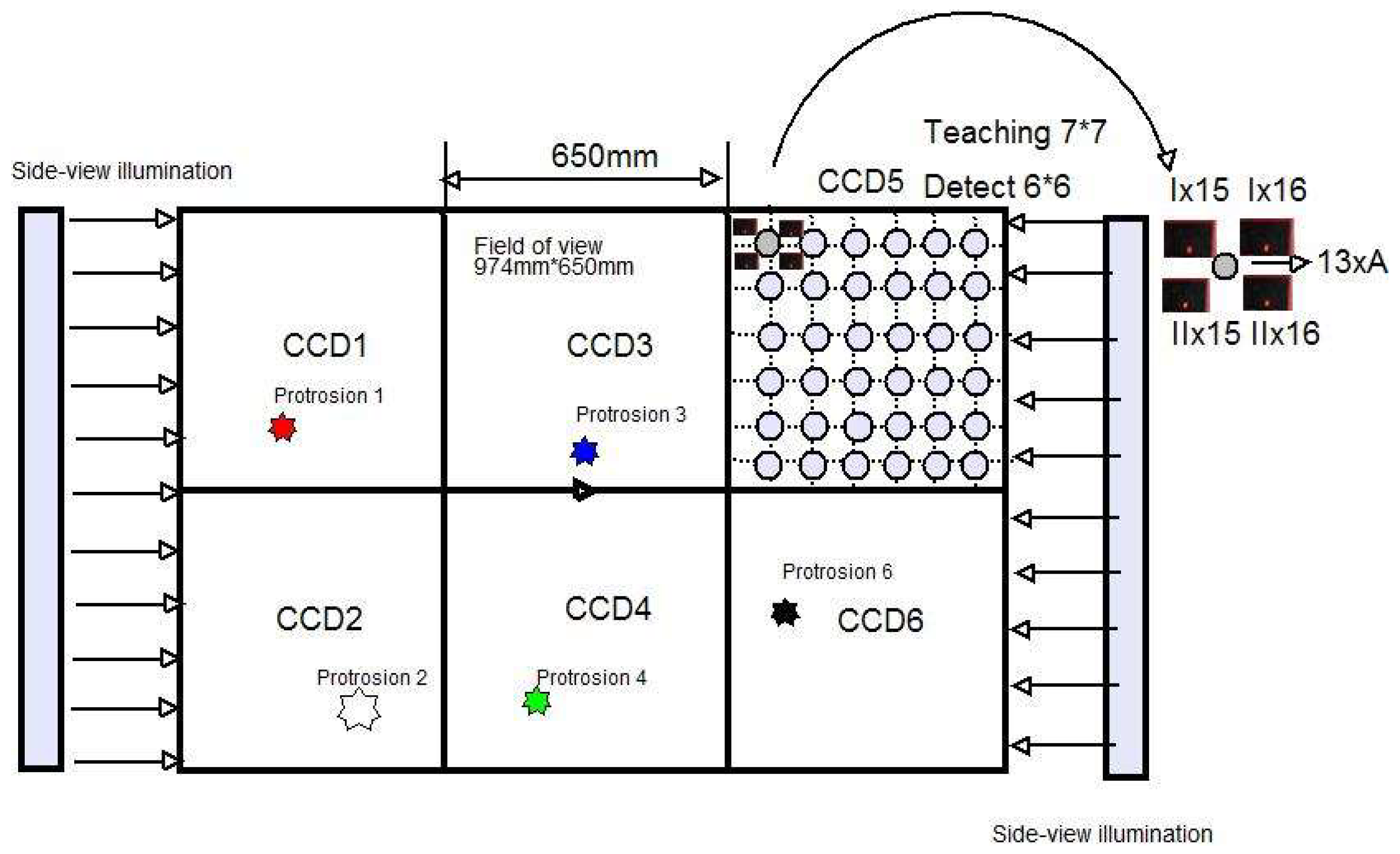 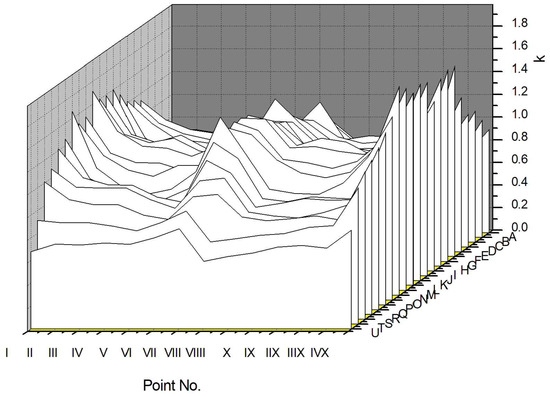 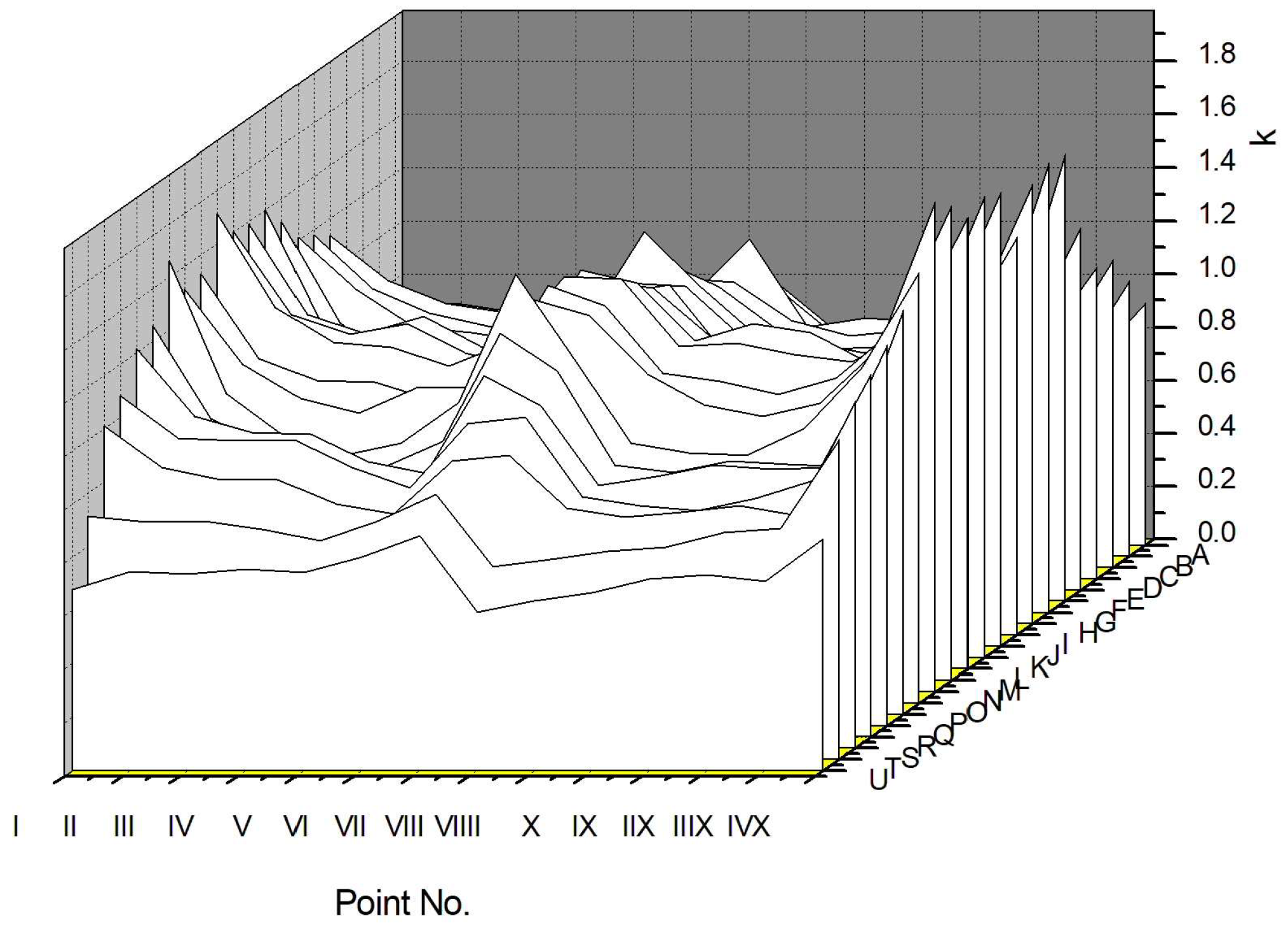 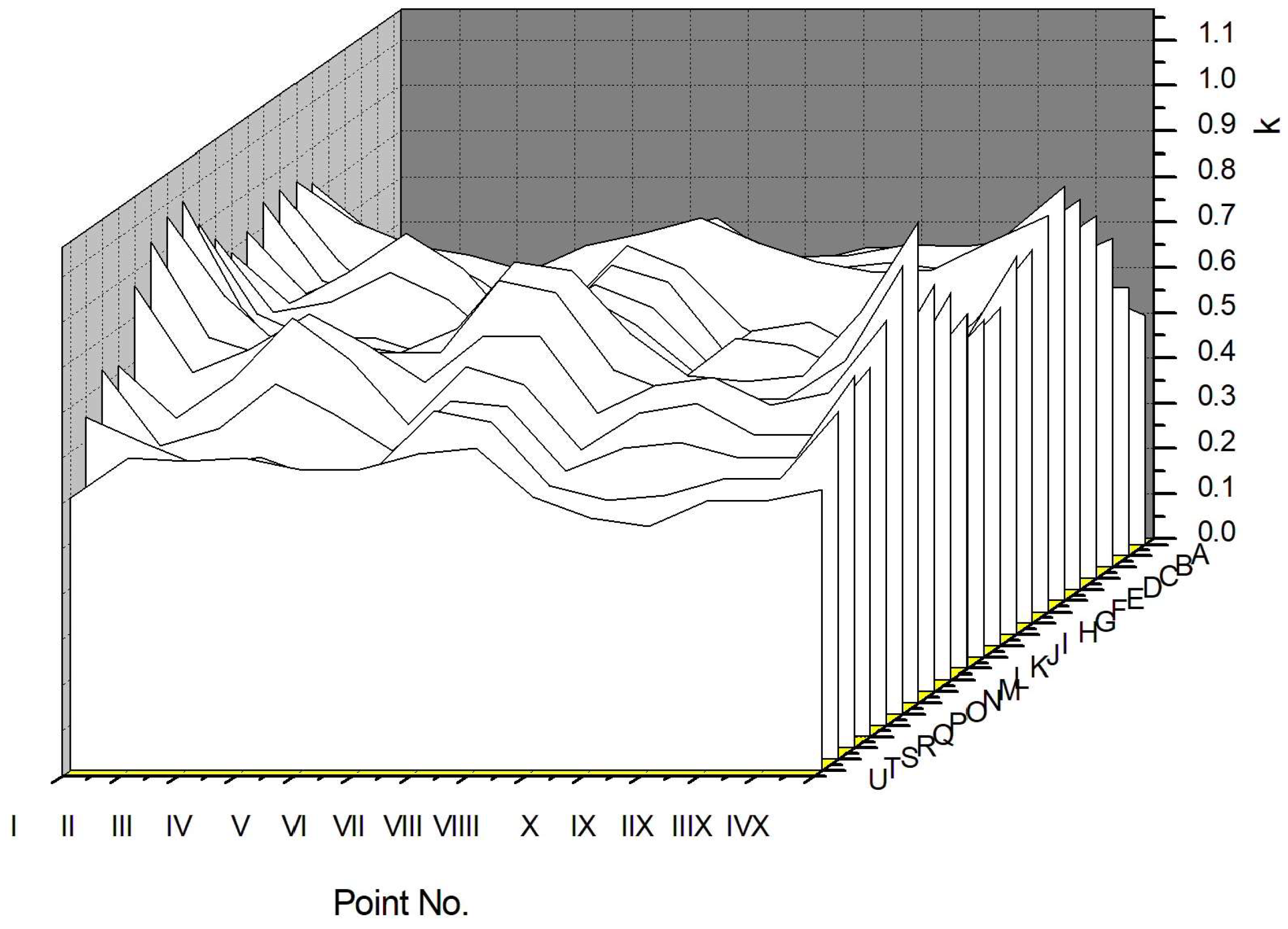 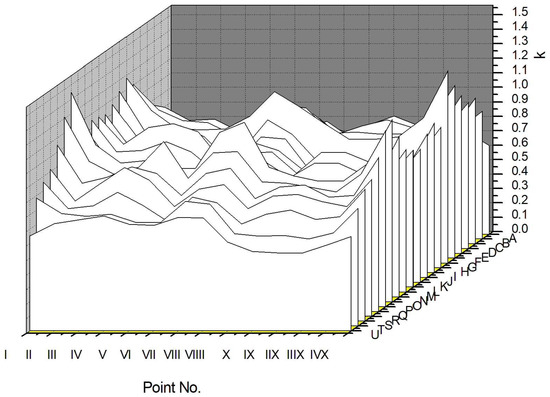 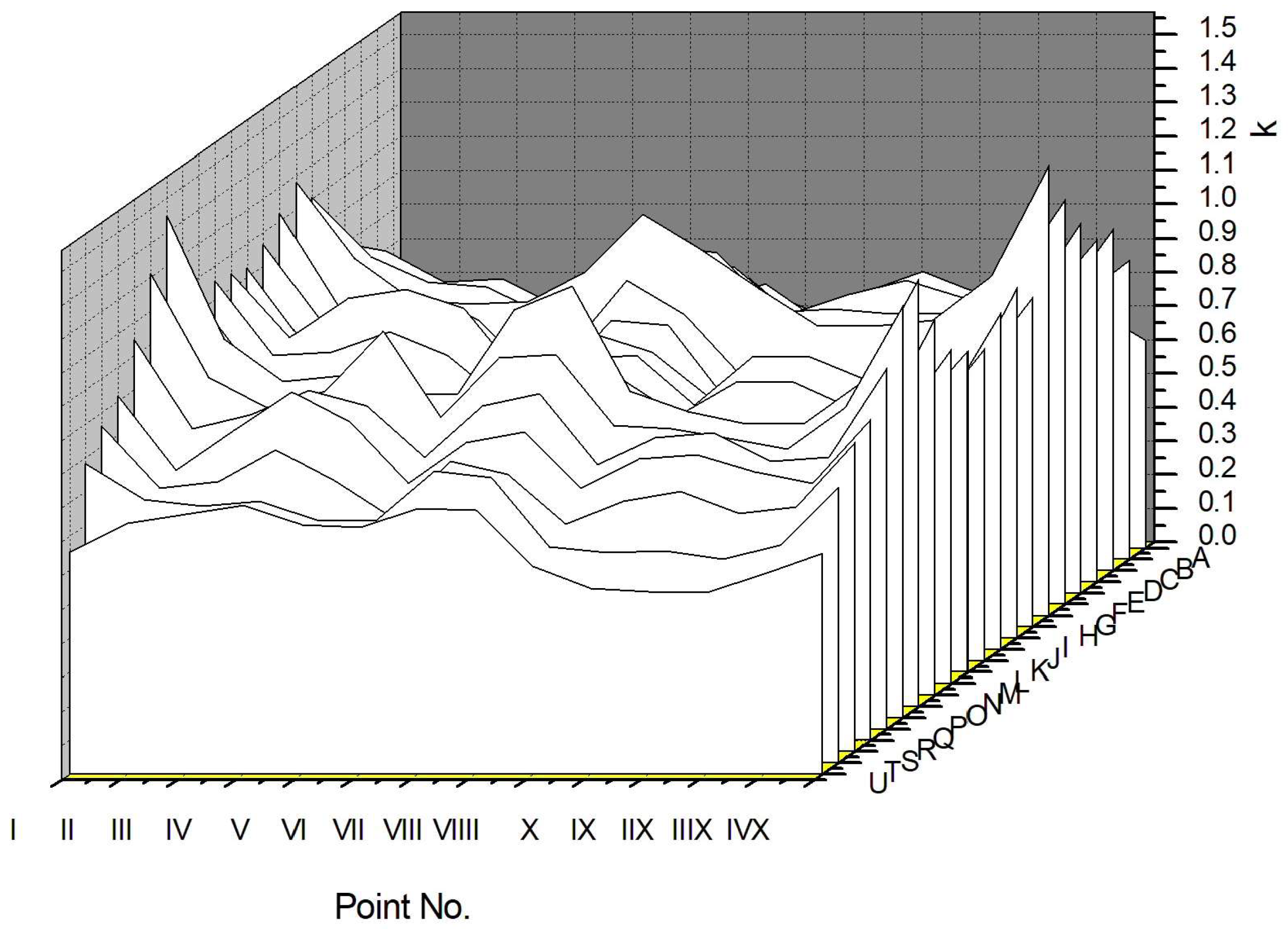 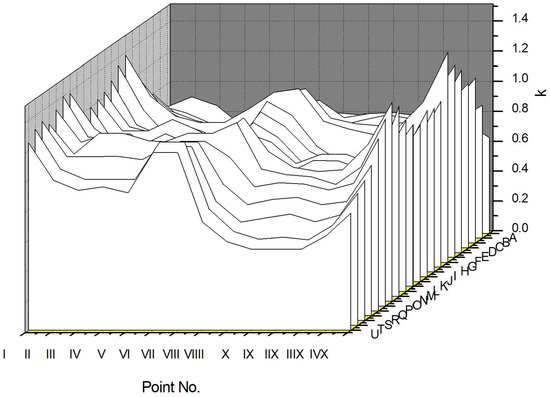 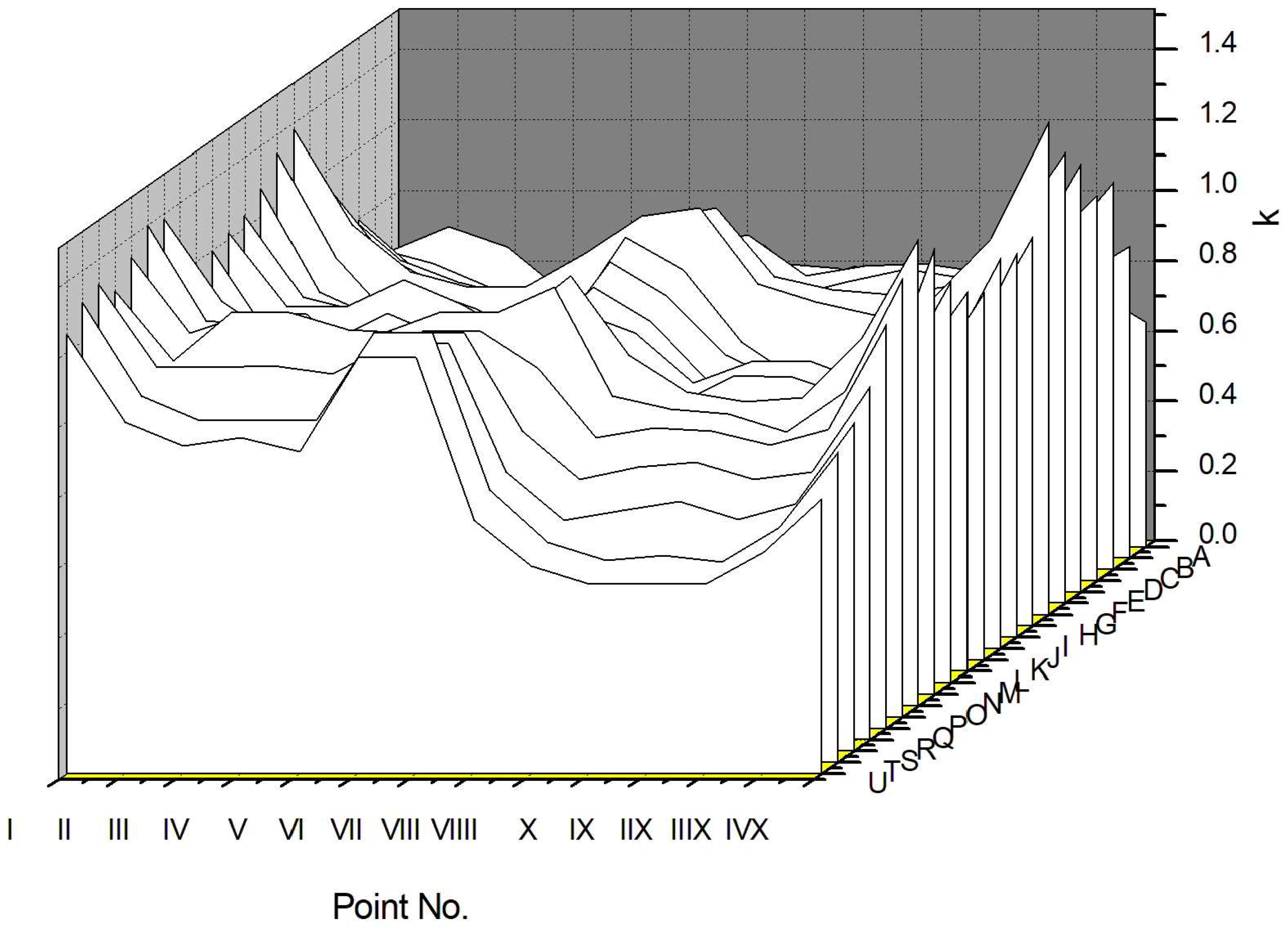 Table 5. Results for Detected Protrusion on Blue Film.
Table 5. Results for Detected Protrusion on Blue Film.
© 2018 by the authors. Licensee MDPI, Basel, Switzerland. This article is an open access article distributed under the terms and conditions of the Creative Commons Attribution (CC BY) license (http://creativecommons.org/licenses/by/4.0/).
We use cookies on our website to ensure you get the best experience. Read more about our cookies here.
Accept
We have just recently launched a new version of our website. Help us to further improve by taking part in this short 5 minute survey here. here.
Never show this again