:
The absolute configuration and structure of aegelinol, a pyranocoumarin isolated from Ferulago asparagifolia Boiss (Apiaceae), has been determined by crystallography. Crystal structure of the inclusion complex of aegelinol in β-cyclodextrin was determined (a = 15.404(1) Å, b = 15.281(1) Å, c = 17.890(1) Å, α = 99.662(1), β = 113.4230(1), γ = 102.481(1)°, P1; R1 = 6.71%) and allowed unambiguous determination of the absolute configuration of the stereogenic center of aegelinol. The pyranocoumarin guest is included within the cylindrical cavity formed by dimeric β-cyclodextrin molecules with a head-to-head arrangement. Crystal structure of aegelinol alone was also determined (a = 6.8921(3) Å, b = 11.4302(9) Å, c = 44.964(3) Å, P212121; R1 = 4.44%) and allowed precise determination of its geometry. Aegelinol crystallizes with three molecules in the asymmetric unit held together by H-bonds and π-stacking interactions.
Keywords:
absolute configuration; crystallography; aegelinol; inclusion complex; β-cyclodextrin

Aegelinol (1) is a pyranocoumarin that was isolated from Ferulago asparagifolia Boiss (Apiaceae), a species growing in Turkey [1]. Aegelinol has also been reported as a minor lactonic constituent of Aegle marmelos [2]. Three abundant pyranocoumarins (Figure 1) (grandivittin (2), agasyllin (3) and aegelinol benzoate (4)) were also isolated from the roots of Ferulago campestris collected in Sicily and both aegelinol (1), their hydrolysis product, and agasyllin (3) showed a significant antibacterial effect against Gram-negative and Gram-positive bacteria [3].

Crystals of aegelinol (1) were obtained at room temperature by slow evaporation from a solution in ethanol. The structure belongs to the orthorhombic P212121 space group with cell parameters a = 6.8921(3) Å, b = 11.4302(9) Å, c = 44.964(3) Å. The structure was solved by direct methods and refined to a final R1 = 4.44%. Main statistics on data quality and refinement are given in Table 1.
Table 1. Main statistics on data quality and refinement for the crystal structures of aegelinol (1) and its inclusion complex in β-cyclodextrin (1-BCD).
The structure reveals an infinite three-dimensional network stabilized mainly by ideal intramolecular hydrogen bonds in addition to very strong π-stacking interactions along the a direction. Aegelinol crystallizes with three molecules in the asymmetric unit held together by H-bonds and π-stacking interactions (Figure 2). The three molecules are identical with negligible differences in the three mutual RMSDs: A&B = 0.0894, A&C = 0.0642 and B&C = 0.105 Å. This is further confirmed by similar geometrical features (Table 2 and supplementary data).
The coumarin moiety is planar with maximum deviations from the least-squares planes of 0.0247, 0.0396 and 0.0181 Å for the three molecules A, B and C, respectively. The dihedral angles between these planes in crystal packing are AˆA=2.65(3)°, AˆB = 13.39(3)°, BˆC = 2.99(4)° and AˆC =10.76(2)°. The bond lengths and bond angles observed in this structure are comparable with those reported for other coumarin derivatives in CSD (e.g., GEHWEW [33] and MOFJIA [34]). 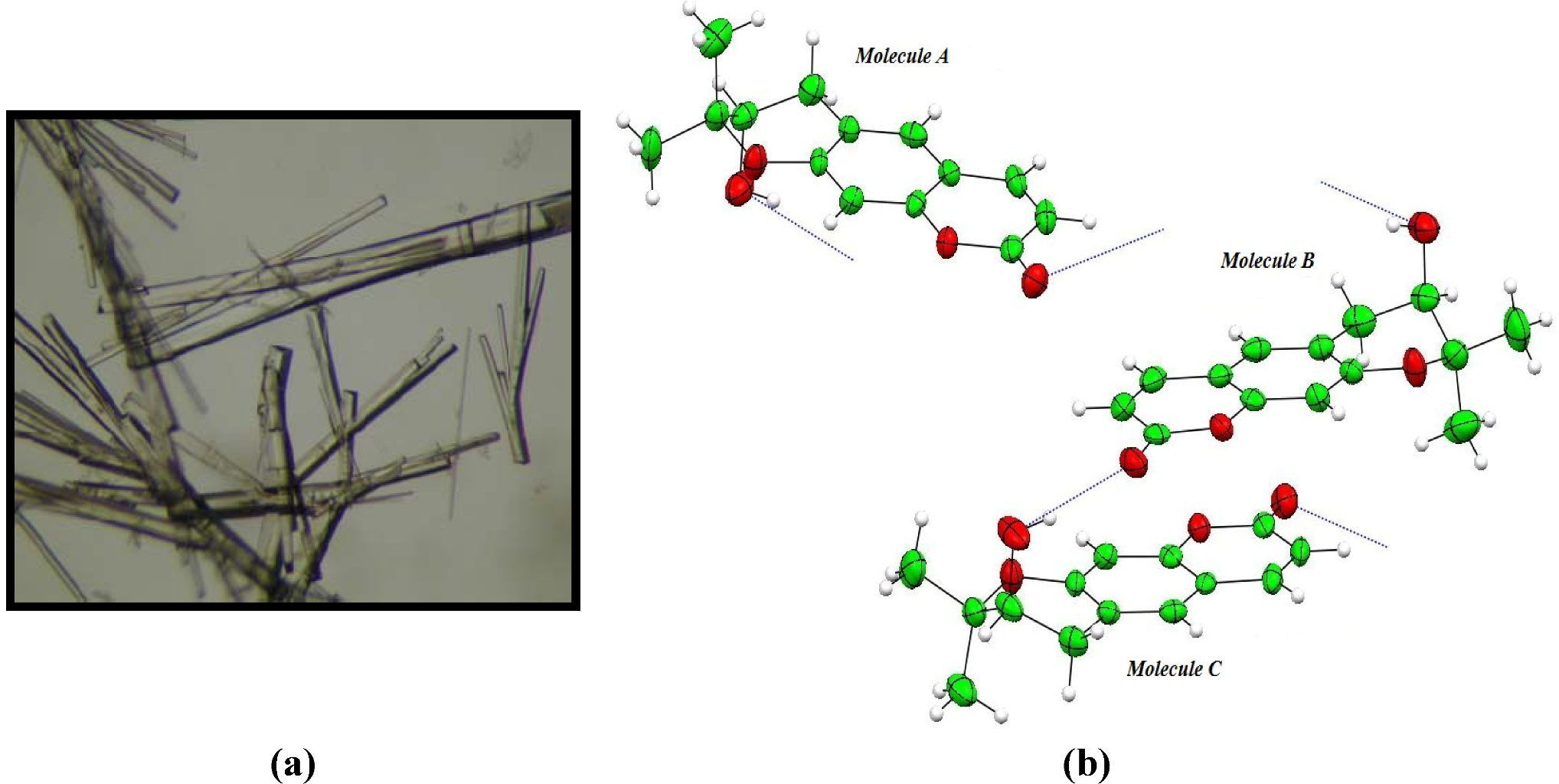 Table 2. Selected structural features (bond lengths (Å), valence and torsion angles (°)) of the crystal structures of aegelinol (1, three molecules in asymmetric unit (A, B, C)) and its inclusion complex in β-cyclodextrin (1-BCD two molecules in asymmetric unit (A, B))
The packing of molecules in the unit cell gives some indication of the types of interaction that such a molecule would show in biological systems. Two types of interaction are found. First, the molecules are partially flat and pack in planes, where molecules A and its symmetrical equivalences are stacked one above the other in the opposite direction. B and C molecules have exactly the same arrangement as A molecules. The distances between these planes and the centroid of aromatic ring in the next layer are A-A = 3.481Å and B-C = 3.391Å. This arrangement allows optimal π-π interaction (Figure 3 (see also supplementary material Figure S2)). Second, the carbonyl group interacts with hydroxyl groups in the next layer’s molecule with OH…O distances ranging from 2.816(2) to 2.903(3) Å, as shown in Figure 2, Table 3. 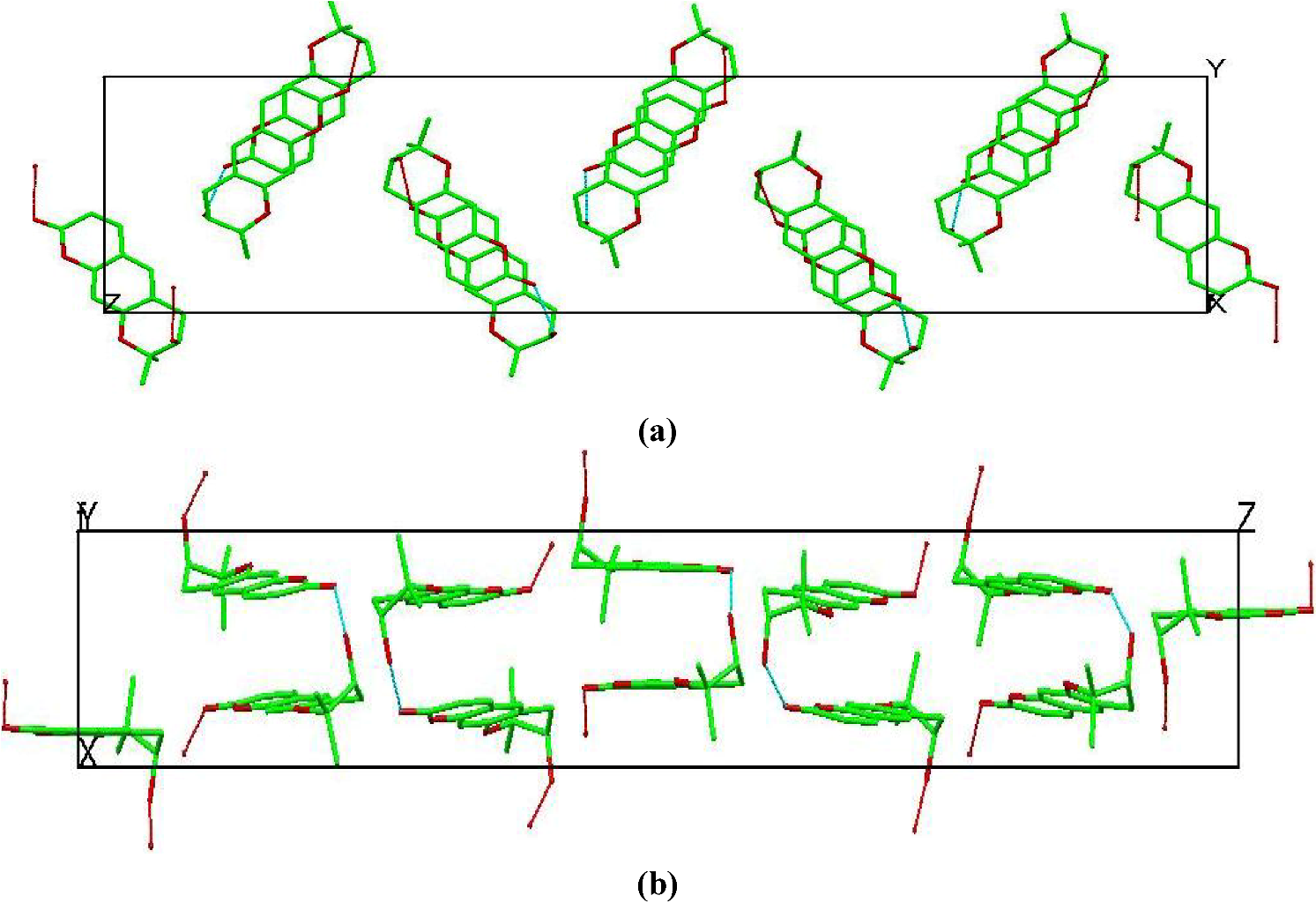 Table 3. Selected hydrogen bonds.
Symmetry transformations used to generate equivalent atoms: i [x-1/2, -y+3/2, -z+2]; ii [x+1, y, z]; iii [x+1, y, z+1]; iv [x, y, z+1] (See supplementary data for molecular numbering Figure S1 and Figure S3).
Statistics of the Flack parameters (x = 0.4(9)) confirm that the absence of suitable heavy atoms (anomalous scatterers) in the molecule is a limitation for reliable absolute configuration of such molecules by X-ray diffraction [9].
Crystal structure of the inclusion complex of aegelinol in β-cyclodextrin (1-BCD) was also determined (a = 15.404(1) Å, b = 15.281(1) Å, c = 17.890(1) Å, α = 99.662(1)°, β = 113.423(1)°, γ = 102.481(1)°, P1; R1 = 6.71%) and allowed unambiguous determination of the absolute configuration of the stereogenic center of aegelinol. Crystals were grown from a solution in water/ethanol (50:50). Two morphologies of crystals are observed: the long and yellow crystals correspond to aegelinol alone, and parallelepiped and colorless ones are related to the inclusion complex with β-cyclodextrin. Primary statistics on data quality and refinement are given in Table 1. Figure 4 presents the structure of the inclusion complex. From this structure, the absolute configuration of C2’ of aegelinol can unambiguously be assigned and corresponds to the (R) enantiomer.
Interestingly, disorder of the included aegelinol molecule within the cyclodextrin cavity was modeled in two sites, nearly similar, with 60:40 occupancy. The coumarin moieties are planar with maximum deviations from the least-squares planes of 0.0034 and 0.0038 Å for the two molecules A and B, respectively. The dihedral angles between these planes, inside the cavity, is 22.2(4)° in the first site and 3.0(3)° in the second site.
The solution of the crystal structure revealed a 2:2 stoichiometry. The pyranocoumarin guest is included within the cylindrical cavity formed by dimeric β-cyclodextrin molecules with a head-to-head arrangement. Crystalline complexes of hydrogen-bonded β-cyclodextrin dimers complexed with organic guest molecules have been found previously to adopt one of four crystal packing motifs: a channel motif (Ch), a checker board motif (CB), an intermediate motif (Im), and, most recently, a tetrad motif (Tt). Packing diagrams are available in different reports on β-cyclodextrin complexes; the reader is referred to these works for both diagrams and discussion of the different structural properties for these packing arrangements [35,36,37]. The CD host molecules are associated through hydrogen bonding between secondary hydroxyl groups as dimers, packing in the previously observed (Im) packing arrangement [35,36,37]. The fact that this arrangement is common to these complexes of β-CD is important for two reasons:

As a consequence, guest molecules experience considerable variation in their specific interactions with the host molecules and waters of hydration, often resulting in the observation of crystallographic disorder. This semichannel-type packing orients along the c-axis direction (Figure 5).

One hydrogen bond is observed between the cyclodextrin and the first site and two in the second site of the disordered guest Table 3 (See supplementary material Figure S1 and Figure S3). These hydrogen bonds are between the hydroxyl groups on the guest and on the primary side of cyclodextrin. The two molecules of aegelinol stack together (mainly involving the coumarin moieties) and are stabilized by hydrophobic interactions within the cavity formed by two cyclodextrins (Figure 4). The distances between the planar coumarin and the centroid of the other coumarin are 3.233Å in the first site and 3.215 Å in the second site. Moreover, this arrangement serves a strong π-π interaction (See supplementary material Figure S2). Notable differences are observed at the level of the pyroano ring of the two aegelinol molecules (RMSD = 0.871 Å and Table 2) most likely resulting from less constraints in 1-BCD compared to the structure of 1 alone. Twenty-four ordered water molecules are also observed in the structure. They are situated outside the cavity at the borders of the toroid rims and in interstices between β-CD molecules. Five water molecules are disordered over two sites.

Crystals of aegelinol (1) alone were obtained and led to determination of its crystal structure. Statistics of the Flack parameters confirm that the absence of suitable heavy atoms (no strong anomalous scatterers) in the molecule is a limitation for reliable absolute configuration of such molecules by X-ray diffraction. Derivatization of the molecule by formation of a chiral salt was not an alternative as the molecule does not contain any basic or acidic function. As an alternative, we were able to grow crystals of the inclusion complex of aegelinol in β-cyclodextrin and refined the crystal structure of the complex, which allowed unambiguous determination of the absolute configuration of the stereogenic center of aegelinol. The (R) configuration of C2’ obtained by this crystallographic study confirms previous conclusions based on indirect NMR data.


Elasaad, Kossay, Racha Alkhatib, Thierry Hennebelle, Bernadette Norberg, and Johan Wouters. 2012. "Determination of the Absolute Configuration of Aegelinol by Crystallization of Its Inclusion Complex with β-Cyclodextrin" Crystals 2, no. 4: 1441-1454. https://doi.org/10.3390/cryst2041441


Elasaad, Kossay, Racha Alkhatib, Thierry Hennebelle, Bernadette Norberg, and Johan Wouters. 2012. "Determination of the Absolute Configuration of Aegelinol by Crystallization of Its Inclusion Complex with β-Cyclodextrin" Crystals 2, no. 4: 1441-1454. https://doi.org/10.3390/cryst2041441