Effect of the Zr-Substitution on the Structural and Electrical Properties of LaFeO3: XRD, Raman Scattering, SEM, and Impedance Spectroscopy Study

Cu-doped K2Ti6O13 (Cu–KTO) nanowires were prepared using a combination of sol–gel and hydrothermal methods to improve the photocatalytic and antibacterial performance of K2Ti6O13 (KTO) nanowires. The Cu–KTO nanowires maintained the monoclinic structure of KTO. The Cu2+ ions could enter into the lattice of KTO by substituting for certain Ti4+ ions and cause the formation of defects and oxygen vacancies. The UV–Visible absorption spectra showed that after Cu doping, the absorption edge of KTO moved to the visible region, indicating that the band gap decreased and the ability to absorb visible light was acquired. The photocatalytic properties of the Cu–KTO nanowires with different doping amounts were assessed by simulating the photodegradation of rhodamine B (RhB) under simulated sunlight irradiation. The 1.0 mol% Cu–KTO nanowires showed the best photocatalytic performance, and 91% of RhB was decomposed by these nanowires (the catalyst dose was only 0.3 g/L) within 5 h. The performance of the Cu–KTO nanowires was much better than that of the KTO nanowires. The Cu–KTO nanowires also showed high antibacterial activity for Escherichia coli (ATCC 25922) of up to 99.9%, which was higher than that of the pure KTO samples. Results proved that Cu doping is an effective means to develop multifunctional KTO nanomaterials. It can be used to degrade organic pollutants and remove harmful bacteria simultaneously in water environments. View Full-Text
Keywords: K2Ti6O13; nanowire; visible light photocatalysis; antibacterial activity; copper doping K2Ti6O13; nanowire; visible light photocatalysis; antibacterial activity; copper doping
►▼ Show Figures 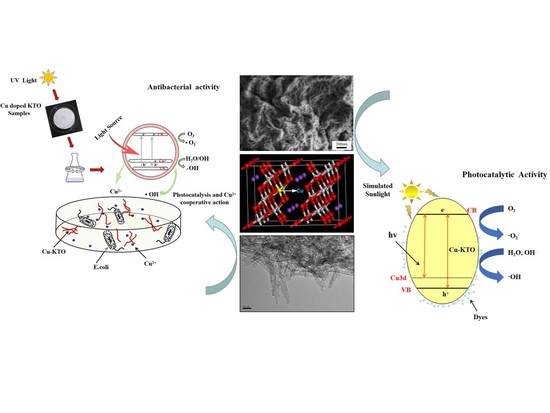