:
Coherent X-ray diffraction patterns were recorded by using an X-ray free-electron laser to illuminate barium titanate nanocrystals as a function of time delay after laser excitation. Rather than seeing any significant thermal expansion effects, the diffraction peaks were found to move perpendicular to the momentum transfer direction. This suggests a laser driven rotation of the crystal lattice, which is delayed by the aggregated state of the crystals. Internal deformations associated with crystal contacts were also observed.
Keywords:
X-ray pump-probe; coherent imaging; ferroelectric oxide

Barium Titanate, BaTiO3 (BTO), is an important ferroelectric material, which was first used to explain the coupling of lattice distortions with phonon mode softening, leading to its ferroelectric structure [1]. It has the classical phase diagram for a perovskite oxide material, with a cubic structure at high temperature, becoming tetragonal below TC = 393 K and then orthorhombic below T2 = 273 K [2]. The room temperature tetragonal phase is ferroelectric with an electric polarization along its c-axis, attributed to displacement of the perovskite B-site Ti4+ ion with respect to the A-site Ba2+, locally displaced towards the unit cell corners.
Nanosized BTO is an important industrial material for making supercapacitors. BTO’s dielectric constant peaks as a function of size, with a maximum of around 140 nm with a factor of three enhancement of dielectric constant, resulting in a big improvement in capacitor performance [3]. A major industry is currently building up for energy storage, which is of significant interest to Energy Sciences. Although BTO has clear structural phase transitions, there are studies showing local rhombohedral distortion even in the cubic phase [4,5]. A powder diffraction study proposed a core–shell structure for the nanoparticles, in which the core is tetragonal and the shell is cubic [6]. The dynamical aspects of this model could in principle explain the enhancement of dielectric constant.
Previous experiments on pump-probe diffraction from BTO thin films at the Linac Coherent Light Source (LCLS) showed a small lattice expansion, but no direct piezoelectric response [7]. A fast sub-10 ps transient increase in the 003 peak intensity was detected, followed by a shift in the rocking curve to lower angles on an acoustic response time of 15 ps. The response indicates a lattice expansion of 0.04% and 0.11% in two different experiments using THz illumination. The expansion was reported to be linear in fluence and attributed to enhanced vibrations of the Ti4+ ion, analogous to transient heating, subsequently relaxing on a time scale of 10 ns.
Bragg Coherent Diffraction Imaging (BCDI) is a powerful X-ray technique for investigating the structures of nanocrystals in three dimensions on the 30 nm resolution scale [8]. By using an area detector far enough from the sample, the fringes surrounding a Bragg diffraction peak, due to the external shape of the crystals, can be oversampled with respect to their spatial Shannon—Nyquist frequency. Such data can be inverted to images using iterative algorithms, namely the error reduction and hybrid input-output methods [9]. These methods depend on a well-defined spatial support function, used as the real-space constraint, which can be provided by a “shrink-wrap” approach [10]. The advantage of BCDI, which is important here, is its high sensitivity to the distribution of nano-scale strains inside the nanocrystal under investigation [11]. BCDI is a 3-D imaging method that is particularly valuable for probing the responses of individual nano-sized crystal grains embedded in an in situ environment, such as a polycrystalline material, a battery electrode or a working catalyst particle. More details about Bragg coherent diffraction imaging can be found in other specialized reviews [12,13,14,15,16,17,18,19,20]. In this work, BCDI is combined with laser excitation of the samples in a pump-probe approach to obtain ultrafast time-resolved images of internal strain fields [21].

Barium Titanate (BTO) nanocrystals were obtained commercially from Sigma-Aldrich and were assumed to have been fabricated by hydrothermal synthesis. The crystals were found by Scanning Electron Microscopy (SEM, Zeiss Sigma 300VP, Carl Zeiss Microscopy GmbH) to have roughly spherical shapes and a size distribution centered at 200 nm. Crystals were drop-cast from ethanol suspension onto a Si3N4 (SiN) window array provided by Silson. The crystals were bonded to the substrate using 1% Tetraethyl Orthosilicate (TEOS) as an adhesive and calcined in air at 723 K [8]. No particular care was taken to ensure that the crystals were separated from each other on the substrate. They were found to be clustered together in aggregates, which was found to have consequences for the laser excitation described below.
The transmission geometry was used to measure coherent X-ray diffraction patterns of the samples. We had previously found [22] that this led to slightly higher damage thresholds for the samples to become detached from the substrate by radiation pressure, at least with respect to the commonly used grazing incidence geometry [23]. The samples were mounted on the Huber diffractometer of the X-ray Pump-Probe (XPP) station of the LCLS, an X-ray Free Electron Laser (XFEL) at Stanford, USA. The 9 keV X-ray beam was focused with in-line X-ray Compound Refractive Lenses (CRLs) and 10–15% attenuators were used to stay below the X-ray damage threshold, as detected by the sudden loss of diffraction peaks. A 120 Hz repetition rate was used. Two-dimensional and three-dimensional Bragg Coherent Diffraction Imaging (BCDI) data at a range of delay times were collected on the CS-Pad detector (pixel size 110 µm) placed 1.575 m downstream of the sample at 27° Bragg angle in the vertical scattering-plane geometry. After mapping the general behavior, discussed below, we selected about six nano-crystals for detailed BCDI measurement over 36 h of “standard configuration” operations at LCLS.
The XPP Ti-sapphire laser was synchronized with the X-ray beam via a motorized delay line, allowing pump-probe delays up to several nanoseconds. The beam came down through the hutch roof and was directed onto the sample by the final focusing mirror in a collinear geometry with about 2° inclination. Temporal overlap was calibrated with a Bi standard. Spatial overlap was set with phosphor screens and checked using diffraction effects seen from the actual samples, as well as with some Au standard crystals [23]. The laser was used on the third harmonic, with a wavelength of 266 nm, to excite the sample above its band gap of 5 eV. Manual adjustments were made initially of the time delay and the beam position on the sample, to explore the response to the laser with a real-time display. Then, time-delay scans were made on aligned samples to extract quantitative values for the Bragg peak position on the detector, to learn about the laser-induced changes of the crystal structure.

Our XFEL experiment clearly shows that rotations of the BTO nanocrystals are induced by laser excitation on a 100 ps time scale, appropriate for an acoustic response of the material. An observed response time delay around 200 ps could be attributed to the generation of acoustic waves at some distance from the part of the sample probed with the X-ray diffraction. The longitudinal and transverse speeds of sound of BTO (in sintered ceramics) are 4800 and 2400 m/s [26,27], so the 250 ps time delay corresponds to a distance between the excitation and its observation of 1.2 or 0.6 µm. The apparent vibration period of 450 ps would correspond to the breathing of a slab of nanocrystals 1.1 or 0.55 µm thick. Both these lengths are greater than the 200 nm size of the particles being measured with the X-rays, so we consider this to represent a collective response of several nanocrystals bonded together into aggregates.

R.H. and I.R. planned the experiment and prepared the samples. R.H., X.H., F.Z., B.C., A.U., S.S., D.Z., D.K. and I.R. performed the measurements. J.D., M.C., and I.R. carried out the data analysis. All authors contributed to writing the paper. All authors have read and agreed to the published version of the manuscript.

The X-ray pump-probe experimental work was carried out at the Linac Coherent Light Source (LCLS), a National User Facility operated by Stanford University on behalf of the U.S. Department of Energy, Office of Basic Energy Sciences. We are grateful for useful discussions about this work with Jesse Clark, Aaron Lindenberg, Mariano Trigo, David Reis and Wen Hu. J.D. thanks the China Scholarship Council (CSC) for financial support.

The authors declare no financial conflict of interest. 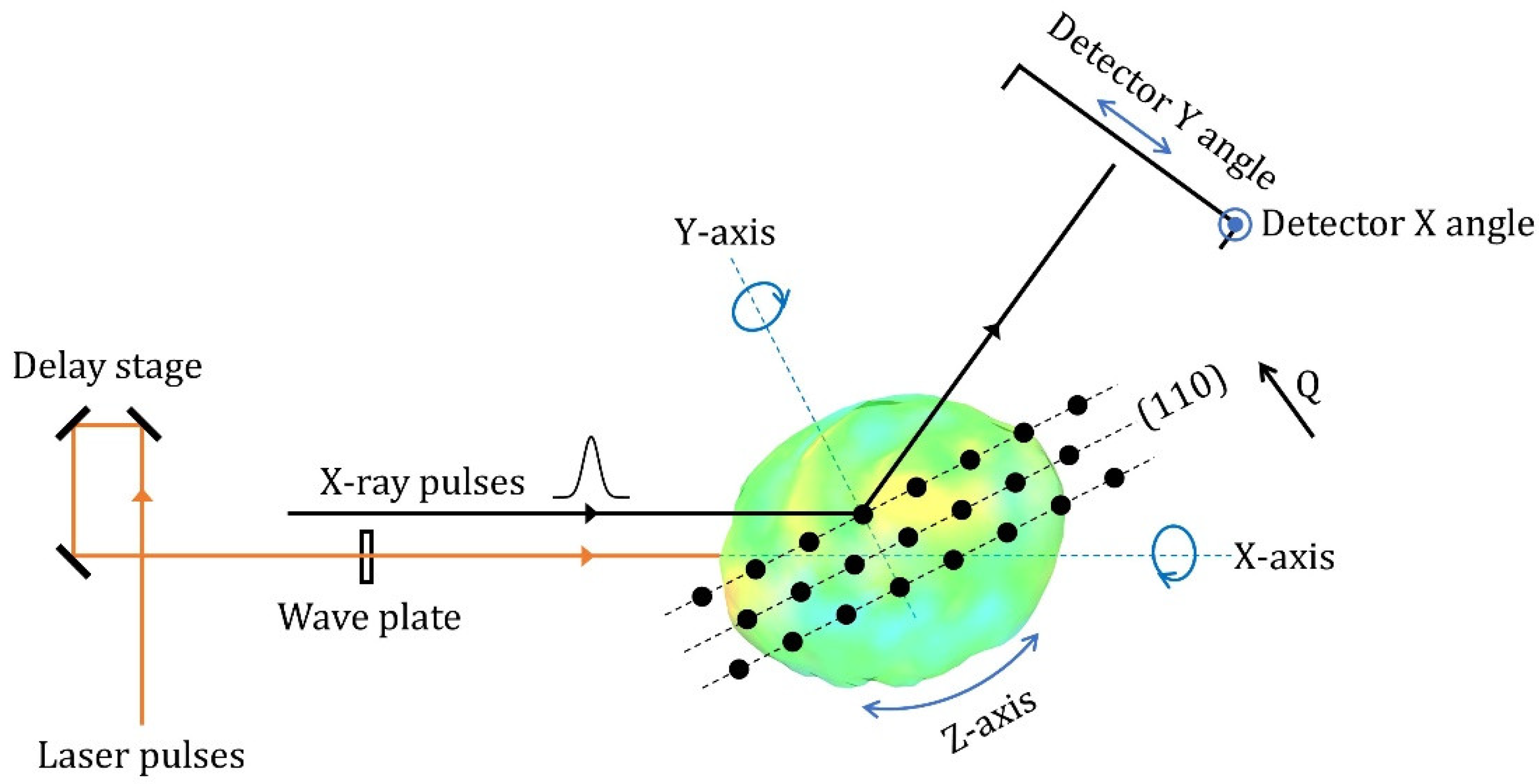 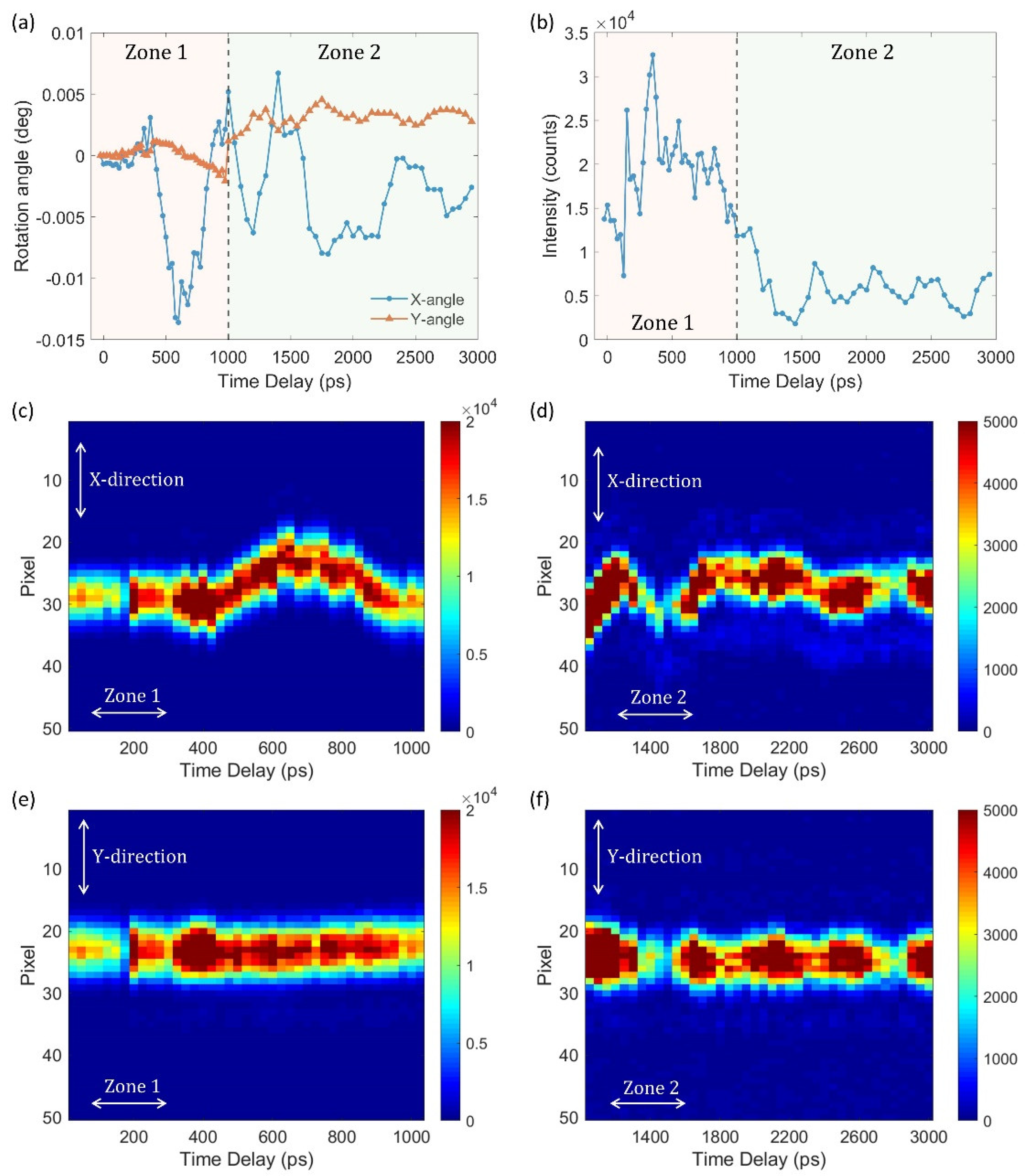