Paratellurite, also known as α-tellurium dioxide, is a ceramic that is primarily employed for its interesting optical properties. However, this material’s crystal structure belongs to the 422 symmetry class that allows a unique piezoelectric behavior to manifest itself: deformation in pure face-shear. This means that crystal symmetry necessitates the piezoelectric tensor to have only a single non-zero coefficient, d123 = d14: such unique behavior has the potential to enable novel gyroscopic sensors and high-precision torsional microelectromechanical systems (MEMS) actuators, as pure face-shear can be used to induce pure torsion. Although α-TeO2 is one of the few known materials belonging to this symmetry class, considerable uncertainty in its single piezoelectric coefficient exists, with the few reported literature values ranging from 6.13 to 14.58 pC/N; this large uncertainty results from the difficulty in using conventional piezoelectric characterization techniques on paratellurite, limiting measurements to indirect methods. The novel applications that would be enabled by the adoption of this extraordinary material are frustrated by this lack of confidence in the literature. We therefore leverage, for the first time, a first-principles analytical physical model with electrochemical impedance spectroscopy (EIS) to determine, directly, the lone piezoelectric coefficient d123 = d14 = 7.92 pC/N.
Keywords: paratellurite; tellurium dioxide; piezoelectricity; face-shear; torsion; impedance spectroscopy paratellurite; tellurium dioxide; piezoelectricity; face-shear; torsion; impedance spectroscopy

Electrochemical impedance spectroscopy (EIS), also known as electrical impedance spectroscopy or electromechanical impedance spectroscopy, is a well-established materials characterization technique [28].
The classical approach of using this powerful characterization method involves measuring the electrical impedance of a sample over a wide frequency range to identify resonance frequencies; a numerical or analytical model is then used to identify the material parameters that fit to the resonance frequencies observed in the experimentally measured impedance spectrum. Typically, phenomenological equivalent-circuit models or numerical finite-element (FE) methods are used. For example, the Randles equivalent circuit has been used in electrochemical impedance spectroscopy for almost a century [29,30]. However, many other equivalent electrical circuits exist, some of which have been found to better describe piezoelectric behavior [20,21,22]. Nevertheless, all equivalent circuits remain empirical in nature and are not directly based on the underlying physical mechanisms.
In addition to the empirical nature of such an equivalent circuit model, the challenge that arises with characterizing paratellurite or α-tellurium dioxide is that it has few resonant frequencies due to only having a single non-zero piezoelectric coefficient. Using a phenomenological or numerical model to attempt to extract material properties from a system with so few resonances is therefore extremely unreliable, as too many best-fit solutions exist.
We therefore prefer to employ a first-principles analytical model based on the underlying physical governing thermodynamic equations, as described by De Castilla et al. [27]. Such an ab-initio approach has the advantage of employing the laws of physics to establish dependent mathematical relationships between material parameters, thereby reducing the number of apparently independent solutions. An experimental impedance spectrum with few observed resonances can therefore by successfully modeled. This novel method allowed us to leverage EIS to directly characterize the face-shear piezoelectric behavior in α-TeO2 for the first time.
The main assumption of this model is that, as discussed in the introduction, the nine possible existing bulk waves can be superimposed to describe the full dynamic behavior of a piezoelectric material. As described in De Castilla et al. [27], each of the three displacement waves propagating orthogonally in Cartesian (x1, x2, x3) space at a time t is expressed as a weighted sum of the contribution of the three bulk waves f(xi) that propagate in that given direction (x1, x2, or x3): where is the displacement vector, e is the Euler’s constant, and j is the imaginary number. In the nine unknown parameters Akl, the subscripts k and l represent the propagation direction and the displacement polarity of the wave component, respectively, and is the angular frequency. Fortunately, as paratellurite has a high level of symmetry, all nine bulk waves f(xi) exhibit a pure displacement, simplifying the computational effort in obtaining an analytical solution for the displacement vector.
To solve for uk, one has to satisfy the Christoffel equation coming from the combination of plane wave propagation and the equations of motion [8]: where is the Christoffel stiffness tensor that is expressed as where is the elasticity stiffness tensor in a given n direction that takes in account the piezoelectric effect as where is the Kronecker delta, ρ is the material density, represents the bulk wave velocity, is the elastic stiffness tensor at constant electric field, is the piezoelectric stress tensor, and is the dielectric permittivity tensor under constant strain. The piezoelectric stress tensor used in the above expressions can be related to the piezoelectric strain tensor more commonly reported in the experimental literature by where is the elastic compliance tensor at constant electric field.
At this point, we can refer to the governing equations describing piezoelectricity (in the stress-charge form): where T is the stress tensor, S is the strain tensor, E is the electric field vector, D is the dielectric displacement tensor, and superscript t stands for the transpose operation on a tensor.
The electric field and the dielectric displacement field at a specific point in the material are unknown. As described in detail in De Castilla et al. [27], integrating these two constitutive piezoelectric Equations (7a) and (7b) over each face of the sample to satisfy the mechanical boundary conditions yields a system of equations representing the displacement field with nine equations and containing nine unknowns Akl. The solution gives the expression of the unknowns Akl as a function of voltage V(ω), dielectric charge Q, the frequency ω, and the material parameters ().
Taking into account the electrical boundary conditions as well, we can integrate the second piezoelectric Equation (7b) over the entire volume of the sample of size 2a1 × 2a2 × 2a3:
As described in De Castilla et al., resolving this expression (8) by using the system of nine equations with nine unknowns obtained earlier yields an analytical expression that describes the electrochemical impedance Z(ω) of the piezoelectric material:
The electrochemical impedance is thereby analytically described based on the piezoelectric, dielectric, and elastic properties of paratellurite, i.e., .
The final step is therefore to measure the experimental impedance spectrum and then to solve the inverse problem by fitting this analytical solution to the experimental data [26,27].
Experimentally, monocrystalline X-cut α-TeO2 grown by the Czochralski method was studied (5 mm thick by 10 mm wide by 10 mm long). Silver paste electrodes were used on the square faces, respectively; as the crystal is unconstrained and large compared to the electrodes, electrical and mechanical effects of the electrodes can be neglected. By imposing the electric field E in the x1-direction (1-direction), only the S23 and S32 deformations are induced by the sole d14 = d123 piezoelectric coefficient, as shown in Figure 1 below.
A Keysight E4990A impedance analyzer (Keysight Technologies, Santa Rosa, California, USA) was used to extract the electrochemical impedance (EIS) spectrum over a frequency sweep from 20 Hz to 200 kHz with a 500 mV excitation signal to capture the fundamental face-shear resonance that occurred around 133 kHz. The analytical model was used to fit to the experimentally observed impedance spectrum, thereby extracting the material parameters.

The electrochemical impedance modulus and phase about the fundamental face-shear frequency are provided in Figure 2 and Figure 3, respectively. The analytical model is shown to be in excellent agreement with the experimentally observed spectra, and describes the fundamental face-shear resonance observed about 133 kHz very well.
We could extract the material properties by fitting the analytical impedance model to the experimentally observed impedance spectra. Note that the nature of the face-shear resonance and the crystal symmetry inherent in the 422 crystal class to which paratellurite belongs allows the extraction of the material parameters , , and . Those are the material property coefficients that describe the face-shear resonance in paratellurite, and therefore are the material properties that play a role in the impedance spectrum observed. The material properties extracted by analytical EIS in the present study are provided in Table 1, as are all the known literature values for the piezoelectric coefficient of paratellurite.
We found that our measurements for the mechanical elasticity coefficient c44 and dielectric coefficient ε11 are generally consistent with the literature for α-tellurium dioxide. Our method is, however, the only direct analytical measurement reported in the literature for d123 = d14, the sole piezoelectric coefficient. An additional benefit of using this analytical model is that because the entire electrochemical impedance spectrum is described using these material properties, it is possible to fit the complete experimental spectrum (over a wide frequency range) at once, thereby reducing uncertainty and experimental error.
In a previous study [19], we had reported on the use of finite element analysis (FEA) EIS simulations and Doppler interferometry to study α-tellurium dioxide, and found 6.13 pC/N ≤ d14 ≤ 6.88 pC/N. However, our previous FEA simulation was unable to provide as satisfactory a fit to the experimental EIS data (after extensive simulation/computation time) compared to the present analytical model that is easily computed with a personal computer in a few seconds. In particular, our previous numerical approach did not reliably converge, as the lack of multiple resonant frequencies in the impedance spectrum of paratellurite provides too many possible solutions for the material parameters. In addition, use of Doppler interferometry required invoking the quasi-static assumption while applying an alternating electric field at 40 kHz—an obvious contradiction. We therefore find that our previous results using numerical FEA and Doppler interferometry are likely an underestimate of the piezoelectric coefficient d14, while not providing for the extraction of other material properties.
Instead, we agree more closely with the measurements of Ohmachi and Uchida [16], who characterized the piezoelectric coefficient indirectly using the purely mechanical resonant ultrasound method. One major drawback of that method is the need for several chemically identical samples cut at precisely defined geometries. Any uncertainty in the machining or chemical consistency/defects is amplified in the final result. In addition, the resonant ultrasound method necessitates the application of acoustic transducers on the sample, thereby preventing free mechanical movement. This contrasts with an EIS method, where no mechanical clamping is needed, and all surfaces are allowed to be mechanically free. Our use of the analytical model developed by De Castilla et al. [27], as opposed to an empirical equivalent circuit or a numerical approach, allowed us to successfully use EIS for this material that lacks multiple resonant frequencies in the impedance spectrum. Given the large discrepancy that exists in the literature regarding the piezoelectric constant d123 = d14, this suggests that the other higher values reported for d123 = d14 also obtained by indirect measurements using the mechanical resonant ultrasound method, including Ogi and Fukunage [17] and Ledbetter et al. [18], may be significant overestimates.
We therefore believe that the present characterization enabled by analytical EIS provides for the most reliable measurement of the piezoelectric behavior of α-tellurium dioxide (paratellurite) to date.

We were able to extract the material parameters , , and of paratellurite (α-tellurium dioxide) by leveraging a first-principles analytical model with electrochemical impedance spectroscopy (EIS). This enabled us, for the first time, to directly characterize the face-shear piezoelectric coefficient in α-TeO2 as = 7.92 pC/N. We found that our measurements are partly consistent with the literature, in particular with the measurements of Ohmachi and Uchida [16]; given that our measurements are the first direct measurements reported on this material using analytical EIS, we believe that other authors that used more indirect methods may have overestimated this piezoelectric coefficient. Although our findings confirm the exciting potential of paratellurite, further work exploring the dielectric loss mechanism will be necessary before this interesting material can be applied in next-generation devices. 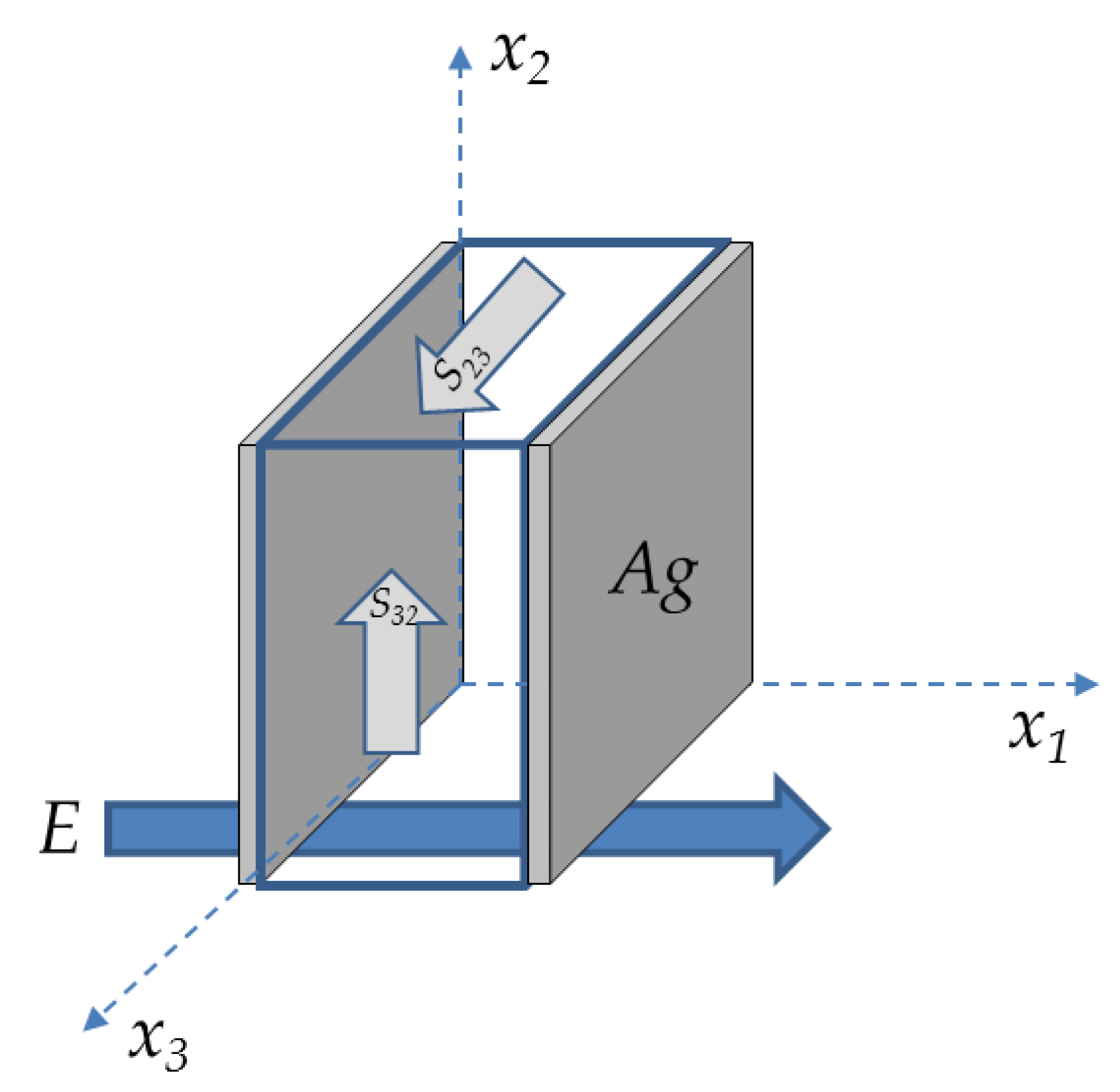 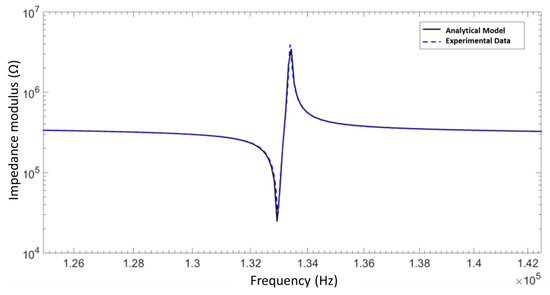 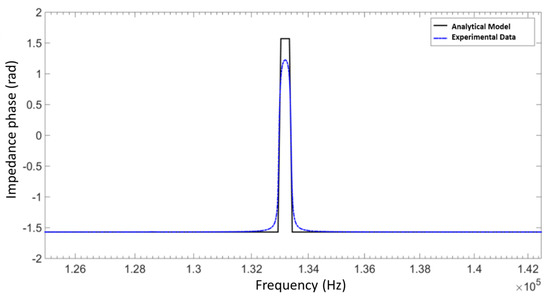